Driving on Indian roads is a risky task as there are many surprises waiting for you on the road. Rashly driven cars and bikes are a common sight on our roads. If you manage to save yourself from these vehicles, there are jaywalkers, cattle, and dogs waiting for you on the road. For all these reasons, it is always a good idea to be alert while driving on the road. However, in some situations, there is nothing that you can do to avoid an accident. Here we have the video of one such scenario from Kerala. In this case, a woman who lost control of her car crashed it into three vehicles that were filling fuel at a petrol pump.

The video has been uploaded by MediaoneTV Live on their YouTube channel. The report mentions that the incident was reported from Kerala’s Kottayam district. The accident was recorded in a CCTV camera installed in the petrol pump premises. In this video, we can see a Maruti Omni van filling fuel from one of the dispensers. A Honda Dio scooter is parked right behind the van and is waiting for its turn. The pillion of the scooter is a lady and she can be seen standing next to the rider. Few seconds into the video we see the lady panicking and asking the rider to move away. However, by then we see a Tata Punch crashing into the scooter and taking the pillion with it.

It even hits the Omni van and pushes it forward. The car had hit another to-wheeler in the petrol pump before crashing into the scooter and the van. The Tata Punch seen in the video is said to be driven by a woman and the car had occupants in it. As per the report, the woman lost control on the car while trying to enter the petrol pump. After she lost control, the car rammed into three vehicles which included two two-wheelers and a car (van). The pillion of the scooter got caught in front of the SUV. The fuel station attendant managed to pull the nozzle out from the van to avoid any major accidents. 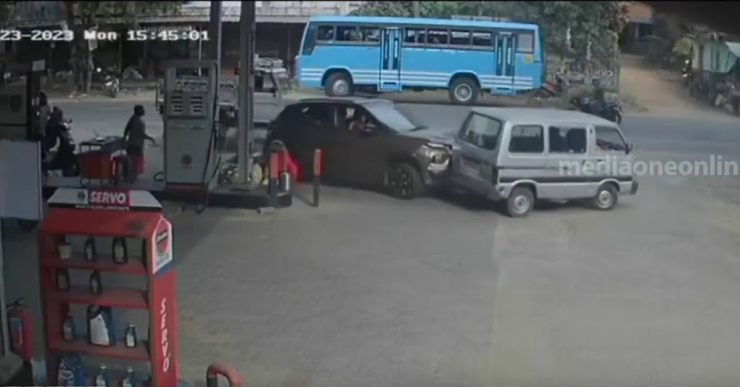 After hitting the van, the Tata Punch took a right turn and crashed into the barricade in front of another fuel dispenser. We can clearly see in the video that the passengers sitting inside the car are trying their best to make the driver stop the car but, it is of no use. Even after crashing into the dispenser, the car did not turn off and it was trying to move forward. It looks like the Punch seen here in the video was the AMT version. If it was a manual car, it would have stalled by now. It looks like the driver might have got confused between the brake and the accelerator pedal which lead to the accident. The occupants inside the car and the people on the scooter were all injured in the accidents. Police will be taking action against the driver after looking into the matter.

Motorcycle.com’s Most Read Reviews of 2022

BMW i4 xDrive40 Coming Mid-2023 But Only In North America: Report