Even though many of us spend our time messing around with cars built on the metric system, we live in a world where the motorsports aftermarket seems to only focus on Imperial hardware. What are we to do with our 14mm strut bolts, 8mm flywheel bolts and the odd 3mm screw when Carroll Smith concentrates on the world of 1/2-inch AN bolts, 5/16-inch hex-head cap screws and 10-32 button-head screws in his “Nuts, Bolts and Fasteners and Plumbing Handbook”?

Modern automotive production, even in the U.S., has left the enthusiast far behind in the adoption of metric standards. In fact, most U.S.- and U.K.-built race cars still use inch-friendly rod ends and AN bolts in the chassis, even when the engine and driveline feature metric fasteners.

One contributing factor to this state of affairs is the scarcity of metric aircraft-spec fasteners. There are a few pieces of metric LN– and NA-spec aircraft and aerospace fasteners that are equivalent to the AN bolts familiar to car enthusiasts, but they are very difficult to find in the U.S., particularly in small quantities. The other limiting factor is racers’ knowledge of metric fastener terminology and standards.

To help expand that knowledge, we’ve put together this guide to the metric fasteners you’re most likely to encounter. The world of metric fasteners isn’t nearly as confusing as it first appears.

Not only does metric hardware differ from standard pieces in how the dimensions are measured, but the metric thread profiles themselves are specified differently than Imperial threads. Instead of being noted by the number of threads per unit of measure, metric fasteners specify thread pitch as the distance between the peaks of adjacent threads.

There is a special high-fatigue-strength profile noted by the MJ specification, but you are very unlikely to need an MJ bolt or nut. (If you do need one, well, they’re not commercially available anyway.) Metric bolts also come in different fit classes, but for the most part they can be ignored for any non-OEM use.

Metric bolts, like the SAE inch-marked pieces, come in different “property” or strength classes. As one would expect, it’s important for a fastener to be strong enough for the job at hand.

The most common strength classes for automotive use are 8.8, 10.9 and 12.9. There are a few others, but they are rare. The number before the decimal in the strength class refers to the ultimate tensile strength (uts) of the bolt in Newtons per square millimeter (N/mm2) or mega pascals (MPa) divided by 100.

The second number and decimal point refer to the bolt’s yield strength as a percentage of the uts. An 8.8 bolt has a yield strength of 640 MPa (800 MPa X .8), or about 92 ksi (kilopound force per square inch)—again, the same as an SAE grade 5 bolt.

These are the bolts used for flywheels, cylinder heads and connecting rods in European and Japanese engines. They can come in any head form and finish, but the most common are hex-head cap screws (think Allen bolts), and usually they are black finished rather than shiny zinc or chromate-plated.

The property class is marked on the bolt head, as is (usually) the manufacturer’s name or abbreviation. Nuts are also marked. The only reason car manufacturers choose to use class 8.8 bolts is cost. Since the price is normally not much cheaper in the aftermarket, don’t bother with anything less than 10.9 bolts.

It may sound unlikely, but the nuts and bolts used at the factory to assemble your Japanese or German car are of much higher quality than what you are likely to find at your local hardware store or industrial bolt store. Even the dealership is no guarantee of quality—typically they order their bolts from a local distributor rather than from the manufacturer.

The best bolts will be made in the U.S., Germany or Japan, but you may never know the source unless you decipher the head markings. You can also ask your hardware supplier to show you the box. Don’t be tempted by unmarked or unknown bolts—if the manufacturer is afraid to put their name on their product, then you should be afraid to use it. The risks are simply too great.

Bolts come in a variety of finishes, but the most common are black oxide, zinc (silver) and zinc chromate (gold). Manufacturers tend to use zinc chromate for most 8.8 and 10.9 bolts, and black for most 12.9 bolts. Aftermarket bolts are usually plain zinc plated, simply because they are the cheapest. If this bothers you, there are suppliers of zinc chromate bolts for your restoration.

If you are building a car from scratch, follow Carroll Smith’s advice and use AN hardware for their superior quality control and wide availability. The same goes for extensive modifications to production cars—metric is cool and all, but it won’t win you any races if you can’t replace a hard-to-find bolt at the track. Also, most consumer-grade metric bolts do not have the same stringent tracking and certification requirements as aircraft bolts.

For the rest of the car, don’t be afraid to use metric fasteners. Their standards may differ from those carrying the SAE and AN designations, but they are no less strong, inexpensive or useful. Keep this guide handy while you’re shopping for hardware and you can’t go wrong.

Ah, the metric system. That great unifier, the Systeme International d’Unites, was the magic bullet intended to kill the evil specter of conflicting international standards, mismatched measurement systems, and conversion formulae everywhere. In the metric world, everything always fits everything else.

In the real world, nothing is ever that simple. Despite the metric system’s image as being internationally consistent, there are four competing standards for metric threaded fastener dimensions. The only real difference between the standards is the size of bolt and nut hex heads and thread pitch conventions. The thread profiles, strength markings and fit classes are the same.

If you’re a true motorhead, you’ve noticed the result of these competing standards. The Japanese automakers are fond of 10, 12 and 14mm heads, while the Europeans and Americans like to use 11, 13 and 17mm heads. It’s minor, but irritating if you have to find a bolt that matches one that’s already on your car.

To unify these different standards, the International Standards Organization (ISO) has defined an arbitrary set of bolt head and shank diameter relationships. The ANSI and ISO standards match, with the exception of thread pitch specification.

The following table details the specified wrench sizes for the most common bolt nominal thread diameters.

The dashes in the table indicate missing numbers in the series. Yellow highlighting indicates less preferred sizes (ISO second and third preferred). Both the ISO and JIS standards eschew use of 7mm bolts, which is why 7mm bolts only appear on European cars whose manufacturers adhere to the DIN standard. 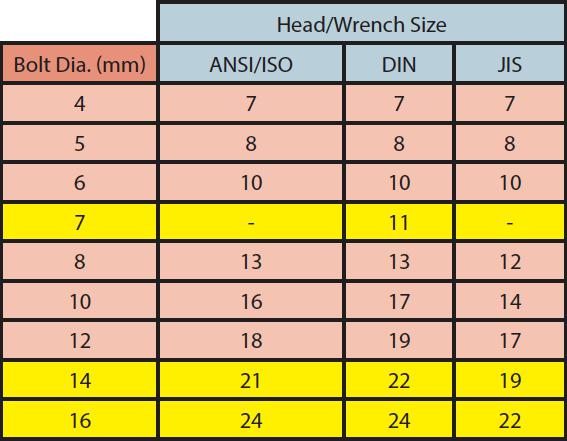 The ISO/ANSI and DIN standards agree on fine and coarse thread pitches for each diameter, but the JIS standards have slightly different common pitches, and no fine thread series. The following table lists the most commonly available thread pitches for each nominal bolt diameter. Dashes indicate unusual or unavailable pitches. There are a few rarely used pitches including DIN fine (in parentheses), but you are unlikely to run into them. 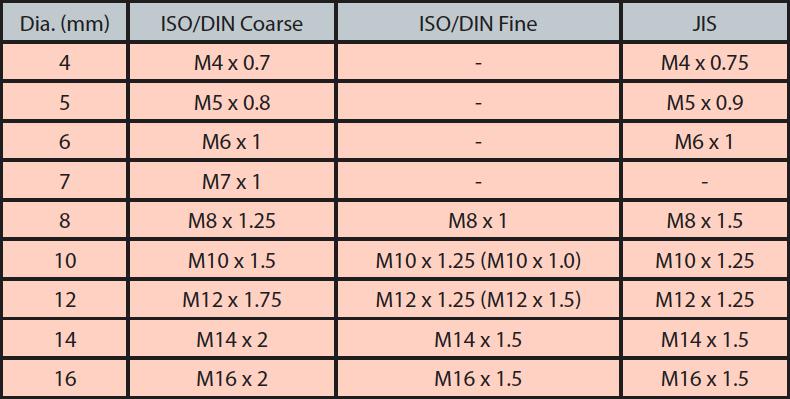 Mercedes’ eSprinter to join the competition in the U.S. this year