Come in, come in. Take a seat there and relax for yourself, I’m sure you’ve had a hard day of not doing a tap as usual. You may be wondering why I’ve gathered you all here today, or maybe not. Some of you probably don’t even know what day it is – lockdown will do that to you I suppose.

While we’ve never claimed to know everything about cars (even though we absolutely do), we thought it might be nice if we passed on some of our wisdom and general insights on the world of classic cars to you, and in particular, which cars look like they will increase in value in the coming years.

“How did you compile such a list?”, “Will these make me money?”, and “ Any chance of a loan?” might just be some of the questions you’re pondering right now. So here are my answers quickly before we move on: 1. It’s a secret, 2. Absolutely, and 3. Absolutely not.

Anyway, you might not have anything better to do, but I certainly do so let’s get going with the first car on our list. Freshly poured café au lait in the paw, and away we go..!

Described as “even better than they look”, this was the first real attempt for the marque to rediscover the little “je ne sais quoi” it had all those years ago. The GTV was styled by Enrico Fumia of Pininfarina way back in 1987 after the sleeping Italian giant decided it was time to make its mark once again in the coupe market. Interestingly, it was thought that it was the 1992 Proteo concept car that this bad boy was based on, but nope, weirdly it was an Audi Quartz concept from 1981 which helped influence this Alfa. “Wow, keep going” you say as your eyes glaze over.

The GTV meaning Gran Turismo Veloce, or Fasht Gran Touring, earned the title of The Best Sports Car 1998 from Jeremy Clarkson… But he also liked the Fiat Multipla so… Ah no, this car won plenty of awards including the 1995 Car of the Year by Autocar, The World’s Most Beautiful Automobile and it also earned Bruno Cena the 1995 Engineer of the Year award for his work on the car. Good man Bruno. 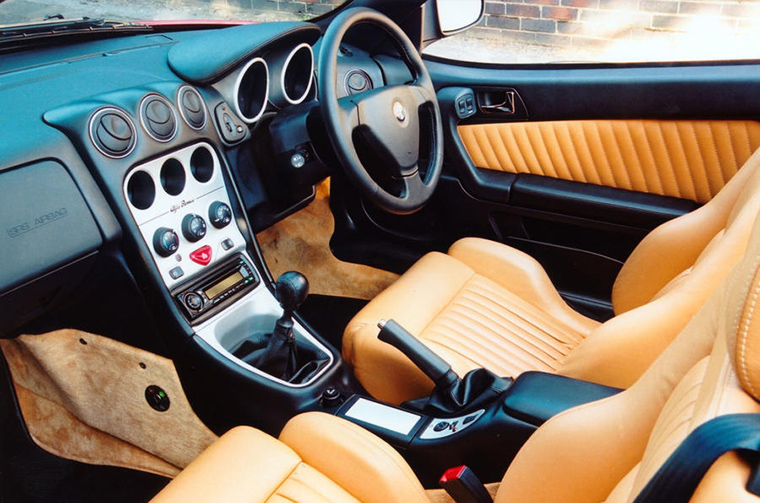 The GTV was the successor to the Alfetta GTV, while the Spider was the replacement for the 105 Giulia Spider. Just a bit of useless information for you there while you drool over that tan interior.

The metal on these cars is pretty solid and is not particularly prone to rust, unlike some of its contemporaries. Yes, we do realise that having a big plastic clamshell bonnet means that there’s one less panel to worry about, but sure look. Even though you can get a V6 version and the 2.0 is nippy in itself, the car wasn’t all about speed in a straight line – which is pretty handy since we don’t really drag race to the shops (or at least we don’t admit to the boys in blue that we do).

Alfa did well and managed to make this front-wheel drive a really entertaining driver’s car, giving it a similar feel to a go-kart or a Mini. Unfortunately, space-wise it’s pretty much the same as a Mini with its tiny boot and back seats only made for a couple of pet dogs or cats.

Sorry, what am I doing! This isn’t a review, this is just to tell you which cars to buy this year. To sum up, the Alfa Romeo GTV is a good ‘un. Won awards, drives great, sounds great, and is great! Parts may not be the easiest to find and they do have a few unique issues but listen, don’t worry about it – that’s where we come in. Oh, and the best part? Prices are on the up. You can get yourself into the driver’s seat of an exceptionally good 2.0 Twin Spark for less than €5,000 at the minute, but I wouldn’t hang around as these will probably rocket now that we have spoken.

My Engine Is Overheating and Growling at Me!