While the highly-popular Mahindra Thar is currently being offered with the options of a convertible top and hard top, the lineup of the lifestyle SUV is missing out on an open-top version, much like the Mahindra Classic from the yesteryears. However, Mangalore-based KAM Customs has addressed this issue and has come up with a solution for it. KAM Customs is offering a completely open-top version of the new Mahindra Thar, which comes with a foldable front windscreen – exactly like the old-school Mahindra Classic. 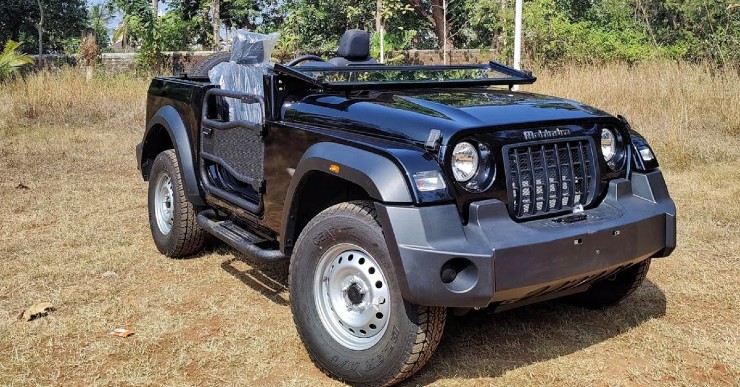 For this open-top version of the Mahindra Thar, KAM Customs has chopped off the upper portion of a hard-top Thar, including the front windscreen, pillars, roof panel and window panels. In this complicated process, the parts which were removed have been integrated into the core structure of the SUV, due to which it doesn’t lose out much on structural stability.

This Thar even loses out on its original door panels and instead gets after-market openable metal-tube door panels which are slimmer than the original. These door panels have been equipped with proper door handles and a perforated metal sheet in their central parts. Mahindra has retained the glass of the front windscreen, though the surrounding panel for it is a whole new unit and is collapsible. It means that the windscreen can be folded down, even while one is driving this Thar. To ensure that it hasn’t lost out on structural stability, KAM Customs has created a customized and removable roll cage for this open-top Mahindra Thar. It is also provided with a soft-top canopy, just in case the owner wants to have a shield over the front seats while he is driving it. The entire look of this customized open-top Mahindra Thar resembles the Willys Jeep from the yesteryears. Since it is based on the base-spec AX version of the Thar, it misses out on alloy wheels, steering-mounted audio and Bluetooth controls, cruise control and an audio system. However, it comes with a manual AC, which is now not much effective to use, given its open-top nature.

Other changes in this open-top Mahindra Thar include custom footsteps for easy ingress and egress. This Thar has been modified for a member of parliament, who intends to use this vehicle for campaigning during the election and public rallies. It should be known that modifications like this change the original structure and identity of the vehicle, for which getting permissions and certifications from RTO is a complicated and long process.