Kevin Cameron has been writing about motorcycles for nearly 50 years, first for <em>Cycle magazine</em> and, since 1992, for <em>Cycle World</em>. (Robert Martin/)

The truly wonderful motorcycle tires of today and the remarkable tire performance we see in MotoGP are alike based on knowing how to make rubber polymers chemically bond to tiny particles of silica (which is silicon dioxide) in tire tread compounds. In the past, tread rubber has been reinforced by mixing into it fine carbon black, but since 1992 it has become possible to achieve even greater properties by including fine silica particles. The long-chain molecules of rubber, linked by attaching to these reinforcing particles, form a strong network in the rubber that can achieve high grip without a correspondingly high rate of wear.

This is an achievement of surface chemistry. Silica and rubber polymer normally have little attraction for each other, but chemists have since 1965 developed so-called “coupling agents” that can overcome such incompatibility. In a typical coupling agent, one part of the molecule attaches to the inorganic silicon while another part is able to bond to the organic polymer (rubber, in this case) matrix.

The original problem that stimulated research of this kind was the weakness of the earliest fiberglass (1940). Being both light and strong, fiberglass seemed promising, but moisture attacked the bond between plastic resin and the glass surface, causing structural failure.

In 1948 Pratt & Whitney engineers considered manufacture of advanced supercharger impellers made of fiberglass instead of the traditional forged aluminum, but at that time, resin-to-glass bond failure remained a mystery. The ultralight impeller concept had to be dropped.

In 1954 a Materials Advisory Board was organized under the US National Academies. In 1965 the MAB published report 214-M, which “advised” that major problems in surface chemistry had been too long ignored (15 years), delaying development of many possible new materials. It called for a research program employing 50 senior scientists over a five-year program to find solutions.

Why was a government agency doing this? What happened to the free market? Private enterprise often has its hands full with production. Money managers become nervous at gambling expensive R&D against the uncertainty of profit that may accrue at a later time.

In the late 1960s I was surprised to read about the development of weight-saving advanced composite wing flaps for a major new airliner. When some flaps developed bond problems, analysis revealed that cotton fibers from the white gloves worn by fabrication personnel had incorporated themselves into laminates, acting as wicks for atmospheric moisture that attacked the fiber-to-resin bond.

The research recommended by the Materials Advisory Board was development of a range of coupling agents able to bond to a glass, carbon fiber, or other inorganic surfaces, and to the resin or polymer matrix. Such coupling agents are now to be found in a great many applications.

After having a cavity filled by my dentist, I asked her if a primer of some kind was necessary to make the polymeric filling stick to my tooth material.

“Why yes,” she said. “We use a silane coupling agent.”

Silane coupling agents in tires? In carbon fiber composites? In my teeth?

In my collateral reading after a recent knee replacement, I learned that related chemistry is included in what I now think of as “Bone Bondo”—the methacrylate-based bedding compound that joins the surgical implants to my bones.

One such bifunctional agent is abbreviated “TESPT” because its chemical name is 37 characters long. It is our good fortune that chemists are able to make sense of such things.

Constantly cited in recent rubber compounding literature is a little book entitled Silane Coupling Agents, by Edwin Plueddemann, a man who spent his 35-year career at Dow Corning developing ways of sticking dissimilar materials together. His 1991 second edition is still in such demand that reprints go for as much as $278.

Something New in GP Roadracing

In 1992 veteran GP roadrace engineer Erv Kanemoto (he worked with Freddie Spencer during his 1980s world championships) noticed something new. Scrubbed-in racing slicks have always had a black and slightly wet or oily appearance, but he was now seeing some tires that scrubbed-in with a gray, dry appearance.

This was the leading edge of Michelin’s “Green Tire,” developed for the auto industry. The black-and-oily treads were conventionally reinforced by carbon black, but the dry-looking gray treads also contained silica as a reinforcing agent.

Silane coupling agents had made this change possible.

The Magic Triangle of Tire Properties

In the past, the “magic triangle” of tire properties—wet grip, rolling resistance, and wear life—had imposed rigid compromises. If you made tread rubber softer to increase grip (as is done in racing with extra-soft “qualifying tires”), you sacrificed wear life and increased rolling resistance. If you made the tread compound harder to make tires wear longer, you sacrificed grip. 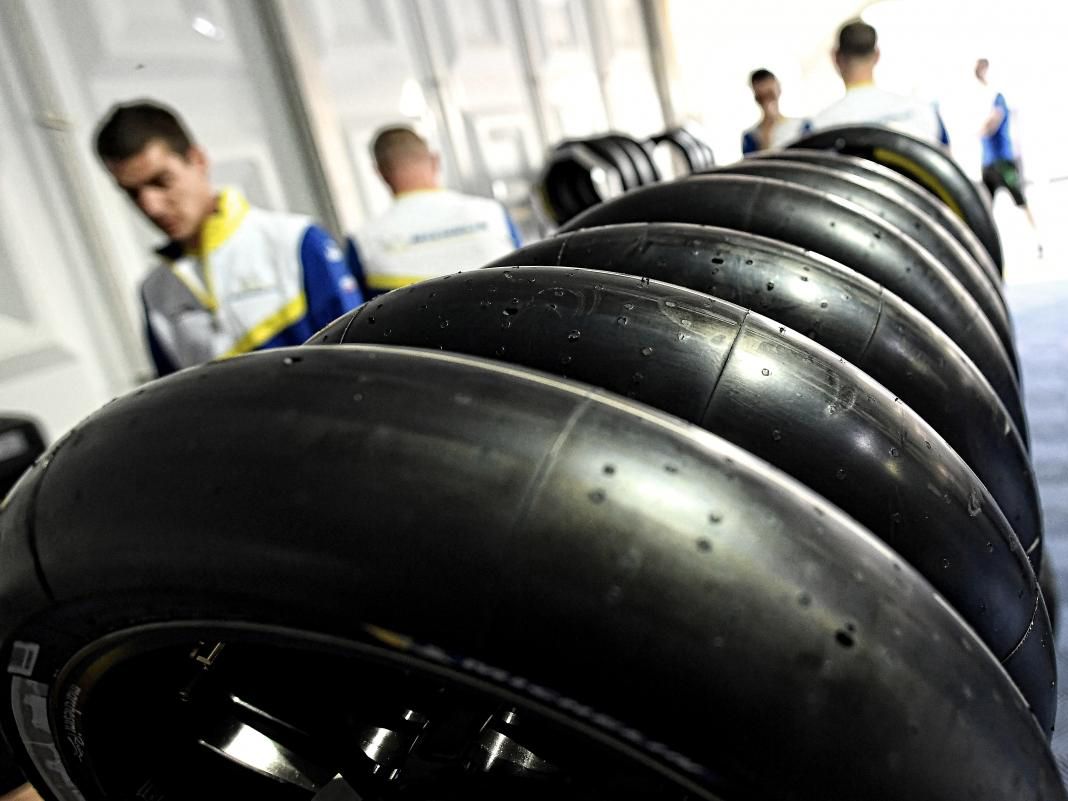 Silane coupling agents made it possible to incorporate silica into tires. (MotoGP/)

The new silica technology has broken these compromises, increasing grip by as much as 20 percent, decreasing rolling resistance by a like amount, and sacrificing nothing in wear life. The driving force behind this change has been the automakers’ continuing efforts to reduce the energy consumption of their products. The new silica-based tread rubbers have reduced tire rolling resistance enough to cut auto fuel consumption by several percent.

For motorcyclists, the important benefit has been the up to 20 percent increase in tire grip, especially in the wet.

Much of a tire’s rolling resistance comes from the internal friction of rubber itself, which engineers call “hysteresis.” Yet hysteresis is also essential to maximum tire grip. This implied that decreasing rolling resistance must also decrease grip—an unacceptable result.

When coupling agents capable of chemically bonding rubber to silica became available, it became possible to create rubber compounds whose hysteresis varied with the frequency of the deformation cycle. Such compounds can have very low hysteresis loss at tire rolling frequency (roughly 14 cycles per second at 65 mph), yet display grip-boosting high hysteresis at the very high frequencies of rubber sliding against the micro-profile of pavement.

Thank the US Materials Advisory Board and their long-ago interest in making fiberglass more durable:

“The mission of the National Materials and Manufacturing Board is to provide to the nation objective and independent technical and policy assessments on materials and manufacturing. The role of the board encompasses strategic planning, program development, and administrative oversight of studies and other activities initiated under its auspices at the NRC.” (NRC is the National Research Council).