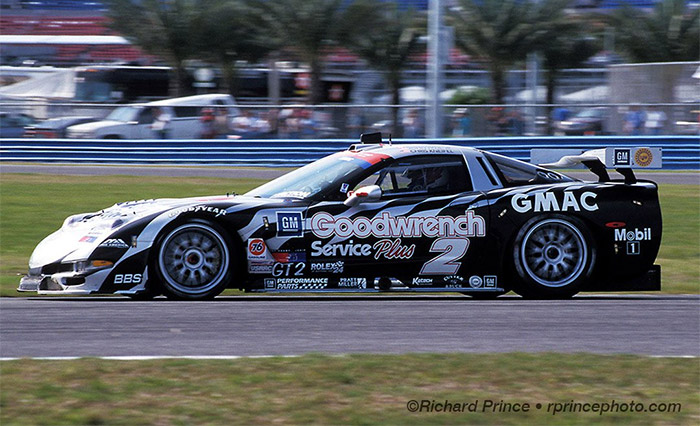 DETROIT (Jan. 25, 2023) – Twenty-five years ago, no one knew what to expect when two Chevrolet Corvette C5-R racecars showed up at Daytona International Speedway for the Rolex 24 At Daytona – the first event for the then-new factory sports car program.

The volumes of stories and successes that came after that first race are enough to fill up multiple books. That’s what happens when a single program with the same manufacturer, the same team and the same car wins 122 races around the world – including four at the Rolex 24 – to go along with 15 Team championships, 14 Manufacturers and Drivers titles in North American competition and more than 350,000 racing miles covered.

Chevrolet and Corvette Racing leaders, current and past drivers offer their thoughts on this monumental achievement and what Corvette Racing has meant to them personally… 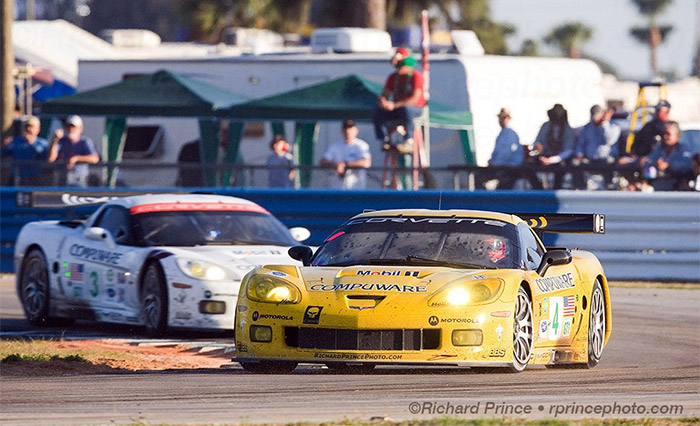 The Corvette C6.R at Sebring

“Twenty-five years of Corvette Racing is a remarkable achievement. I remember being part of our first race at Daytona in 1999 and the excitement around our first race. Now 25 years later, that level of anticipation and thrill remains for everyone within our team and our Corvette owners and supporters. This program is a benchmark in our company for technology and development transferring from racetrack to showroom. Engine technology, advanced aerodynamics and light-weighting materials are hallmarks of how Corvette Racing has influenced Chevrolet vehicles for 25 years. I can’t thank the team members, our Corvette owners and our Corvette fans enough for their 25 years of loyalty, and we look forward to many more.”

“Corvette Racing is very special to me personally. Coming from the production side of Chevrolet, I saw first-hand the influence that our motorsports participation – Corvette Racing, in particular – had in design and development. It was nothing new as the program already had established itself as a leader in technology transfer. But seeing that in real-life was very cool, especially given the Corvette I had in my garage. Moving to competition and working close with the Corvette Racing team – the crew, the engineers and the drivers – and meeting so many of our passion Corvette owners and fans has been an absolute thrill of a lifetime. As exciting as that is, I’m even more excited for what the future holds for Corvette Racing.”

“I knew when I joined Corvette Racing that my goal was to be here long-term. I’m really happy that it worked out that way. When I joined in 2009, I had the option to stay with another manufacturer, but I had discovered American racing a few years before that and my choice was to join what I thought was the best team, and I still think we are the best. I’m very thankful. It’s quite unique to see a 25-year relationship at this level. I’m happy to have driven Corvettes for 14 years and going on 15.
“The first time I saw Corvette Racing was watching footage of the win at Daytona in 2001. Even though I wasn’t racing in sports cars then, I still saw a lot of the Le Mans 24 Hours. You knew those yellow cars were going around and winning races. When I moved to GT in 2006, we knew that the bigger battles would be in America with Aston Martin vs. Corvette. I was on the other side then and experienced how hard those battles were when we would race at Le Mans and Sebring. My eyes were really opened to how hard Corvette Racing competed. The relationship between the two teams was great always.

“This is part of the Corvette Racing environment: My family has always been welcomed in and it is an extended family. During the week at home, I have my own family and on the weekends I have Corvette Racing. When I joined, I was 28 and was probably one of the youngest members of the team. Now it’s the complete opposite! I don’t know how many people on the team are older than me now! But I’m happy I can still provide experience and speed to the team. Consistency is big here and so is experience.”

“It’s amazing. In motorsports, I don’t know how many relationships make it to 25 years. For GM, Chevrolet, Pratt Miller and Corvette Racing to be this family for so long, it comes down to success. If they weren’t successful, I don’t think this relationship would still be going on. It speaks volumes for everyone involved. For me to be part of it for all these years is a very special feeling and something I’m very proud of. The last few years as a full-time driver have been amazing with winning a couple of championships and winning races like Daytona and Sebring and all the special ones that everyone talks about is huge, and that’s what Corvette Racing is known for.

“I was 10 years old at Le Mans watching my dad for the first time, and we shared hospitality with Corvette Racing. So I saw it first-hand back then seeing all the Corvette Racing guys on the biggest stage against the biggest manufacturers. It was always the goal back then to be in that position so for all of that to come full circle, it’s almost impossible to believe that it’s happened. It’s hard to picture that I was once a kid watching the team back then. It’s super special and something I’m always thankful for. I know the opportunity could have never come and I could have been doing something way different with my life. It’s always something I’m thankful for.”

“Twenty-five years is incredible for a team and car manufacturer partnership. To last that long is unheard of. It’s a testament to how well the foundations of the program from Day One have allowed it to continue this long. Each year, the team and Chevrolet grow that relationship and partnership with closer links to racecar and production cars. In many ways, it starts with the commitment that Chevrolet has toward sports car racing – not just in the United States but around the world.

“Car manufacturers oftentimes love to play for a little bit and then take a break or go somewhere else. But Chevrolet and Corvette have been consistently here for 25 years. Any car manufacturer looking at going racing needs to look at what Corvette Racing has done. The production cars have transformed from what they had been in the late 1990s when this program came about to where the eighth-generation Corvette is now. In terms of being faster, better handling and everything you want in a car, the Corvette has improved over the years. The racecars have gone hand-in-hand with those production cars as well in improving over the years. It’s a good mirror of having a great product for the road and a great product on the racetrack. I feel very fortunate to have been part of this program for as long as I have, and hopefully that continues on in the future.”

“It’s amazing. I sat down with some of the Chevy leadership in September of 1997 and they talked about taking a Corvette to Le Mans. I was dumbfounded! But they were serious about it and said they wanted me to be part of it and lead the program as a driver. I couldn’t say yes fast enough!

“It’s great to see not only the success of Corvette Racing but also the development of generations of production Corvette. They both improved hand-in-hand. To see how both have evolved is awesome to look at.

“We certainly learned a ton at that first Rolex 24. And we continued to get better throughout 1999 and into 2000. When you look at how long development occurred, you realize how much work went into it. In 2000, we knew we had a fast car and it was a matter of putting all the pieces together to finish it off. But the evolution of the cars and people was phenomenal. There were tough times but everyone kept digging and we were all better for it.”

“When I first tested for Corvette Racing in 2001, the team already was established and it was a force in the paddocks of the American Le Mans Series and at Le Mans. When you get into three or four years of a program, you think that something will change and something will happen to move on to the next thing. But it was amazing to see how Corvette Racing grew from C5-R to C6.R through the different competition we faced. The racing back then, thinking about it now, makes the hair stand up on the back of my neck. It was fantastic fun and great, intense racing.

“You get to 2010 and I’d been there for nine seasons. You think how this keeps building and building every year. The competition level in any form of GT racing is so high, no matter where you go. But this team has constantly been running at the front. Part of that key is building on the foundation of the road car, and you see that from generation to generation. You see the lessons that have been learned and how they are applied in production and with the race team. It shows how hard everyone works together and the overall effort of the individual groups. Everyone is pulling in the same direction and wanting to keep progressing and continuing the level and standard that Corvette Racing has established for so long.” 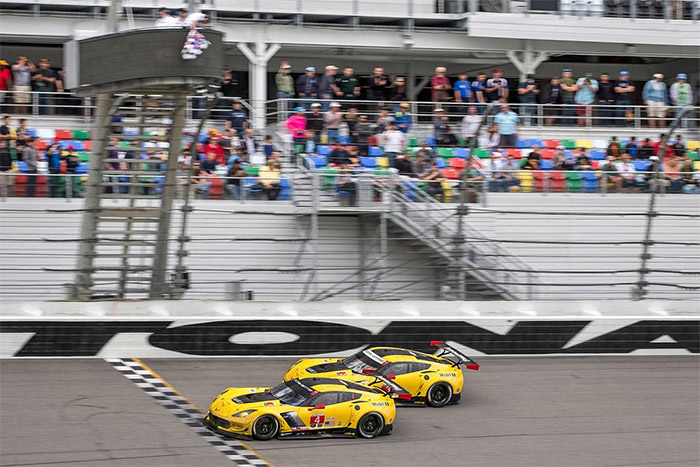 The Corvette C7.Rs at Daytona

Chevrolet on Display All Around Daytona

Exciting Chevrolet products won’t be found just on the track at the Rolex 24. Starting Friday fans, can check out a large variety of Chevy models at three locations around Daytona International Speedway. The Chevrolet Experience Center, the Chevrolet Injector and Chevrolet Motorsports Display each will be full of Chevrolet vehicles that spectators can learn more about throughout the weekend.

The Chevrolet Experience Center is located next to Victory Lane. The main attraction for Corvette enthusiasts is the 2024 Corvette E-Ray – Chevrolet’s first electrified, all-wheel drive Corvette. In addition, multiple versions of the 2023 Chevrolet Corvette Z06 will be on display alongside Blazer RS, Corvette Stingray, Tahoe RST and Bolt EUV Premier.

The Chevrolet Motorsports Display in the Fan Midway will have a number of attractions:

• Corvette Racing t-shirts for fans who sign up with Chevrolet 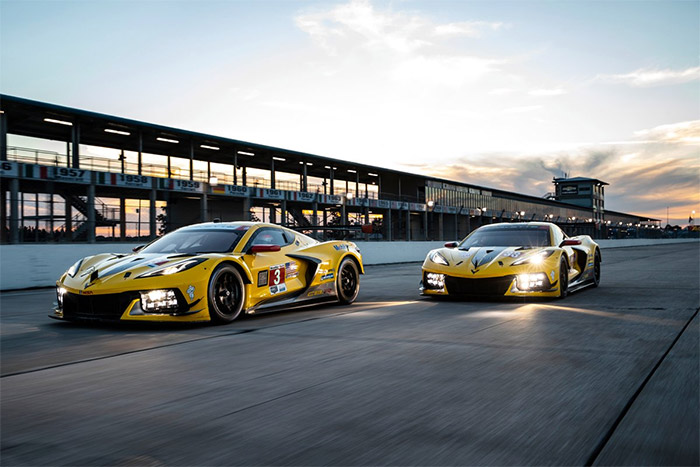 The Corvette C8.Rs at Sebring

As at the Chevrolet Motorsports Display and Chevrolet Experience, Chevrolet product specialists will be on-hand to answer questions on each model of Chevrolet vehicle throughout the weekend.

Corvette Racing at Daytona: Positive Steps Forward into the Rolex 24

Corvette Racing Rounds Out FIA WEC Lineup in No. 33 C8.R