That is the insistence of boss Mike Krack, even though the Silverstone based team is now heralded as one of the most aggressively-developing and ambitious midfield teams on the grid.

Two-time world champion Fernando Alonso has been signed up for 2023, with Krack telling AS newspaper that despite the 41-year-old Spaniard’s age, he can keep racing for ‘many years’. 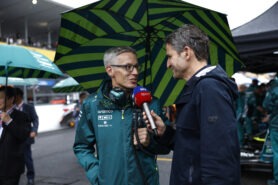 “You say that he does not have many years of F1 left but I am not sure he agrees with that,” Krack told the Spanish publication.

“If you have someone with this level of motivation, as we have seen with Valentino Rossi, and it’s combined with the motivation, dedication and the physical and mental preparation and his talent and experience, I don’t think it means time is running out.”

The risk, of course, is that Alonso will put too much pressure on Aston Martin.

“I’ve only heard good things about him,” Krack laughed.

“You hear stories of course but I like to live my own experience and until now I have only had good relations.

“I don’t expect any problems with Fernando as long as we give him a fast car and we are transparent.”

Aston Martin finished just seventh overall in the past two seasons, but Krack reveals that there is “absolutely nothing” in common between the 2022 and unlaunched 2023 car.

But when asked if signing Alonso runs the risk of putting too much focus and pressure on the team, Krack explained: “It’s certainly something we have to avoid.

“We are trying to progress and we want to be there in a couple of years, but we have not said that we are going to win because we have Fernando. I would be surprised if people see us as a team that only talks about winning, because we don’t do that,” he added.