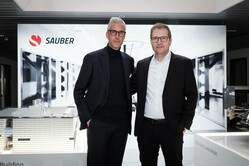 As it slowly morphs into Audi, the Alfa Romeo F1 team has appointed Sauber Group MD, Alessandro Alunni Bravi as its Team Representative for its final season.

The experienced Italian, who has been part of the Sauber Group since 2017, will be adding this role to his name for the 2023 season and beyond, representing the team in all official functions at race weekends and away from the track.

The appointment represents one of the first tasks accomplished by the new CEO of the Sauber Group, Andreas Seidl, following the commencement of his tenure at the Swiss company on January 9th.

The decision will see Alunni Bravi, in his additional role, work together with the technical and operational departments to continue the team’s growth and success, while delivering to internal and external stakeholders of the team the value Alfa Romeo has been known to produce.

Alunni Bravi’s assumption of the role will mark a definite step forward for Alfa Romeo and the Sauber Group as a whole, allowing Seidl to focus on his objective of further growth of the Group, ensuring success in the short term and preparing the team for its exciting future.

“I am delighted to confirm the appointment of Alessandro Alunni Bravi to the role of Team Representative, in addition to his existing duties of Managing Director of the Group,” said Seidl. “His vast experience in motorsport has equipped him with all the tools he needs to succeed, and his intimate knowledge of the team, of which he has been part for more than five years, will ensure stability and continuity in our progression.

“Alessandro representing the team during the Formula One championship will allow me to focus on growing the Group and preparing for the challenges and opportunities that await us. I thank Alessandro for his belief in our vision and I welcome him to this additional position: I am convinced this is another valuable addition to what is without any doubt a very strong team, from the drivers to the management team, to each one of our employees, capable of building on last year’s success and creating a bright future for Sauber.”

“I want to thank Andreas and our shareholders for their trust,” added Alunni Bravi, “and I want to reiterate my commitment to giving my best to live up to their expectations and represent the team in the best possible way. It is a huge privilege to keep working with a group of incredible people who, over many years, have helped me integrate within the Sauber Group: what they gave me in this time will enable me to fulfil this task and represent the team according to our shared vision and our objectives.

“I am fully conscious of the work we have ahead of us and of the challenges that face us: I approach this task with humility, knowing I am part of a strong team that will get the job done, and with the belief we have everything we need for a successful future.”

Lamborghini at the Goodwood Festival of Speed

Tips & Tricks: How To Detail Your Car’s Exterior Like A Pro