The fourth generation of Maruti Suzuki Jimny in its three-door iteration made its official debut back in 2018 and ever since then, the people of India were waiting for its launch in the country. And despite Maruti producing the three-door SUV here in India for export, it never launched the model. The reason given was that it was not a practical vehicle. Although finally waiting for many years, this year the company finally pulled the covers off of the five-door Jimny in India. For the longest, the Jimny has been known for being a small but capable off-roader, but the launch of the five-door SUV received a little skepticism. So to clear up the doubts the CTO of Maruti Suzuki India Limited stated that the car is still capable enough. CV Raman – CTO, of Maruti Suzuki India while speaking to Autocar India stated, “When you go from 3-door to 5-door, you obviously need to increase the wheelbase. However, we have optimized it in a way that it doesn’t lose its off-road character”. He added that despite the addition of two doors the Jimny five-door will still be capable enough to tackle the terrains which the three door model is capable and there will be no compromises in the off-roading capabilities.

The remarks from the Maruti CTO came as result of the dubiety from the hard core off-roading enthusisats of the country. The off-road aficionados believed that the increased wheelbase of the car would although make it practical enough for the country it will make it a little less capable. 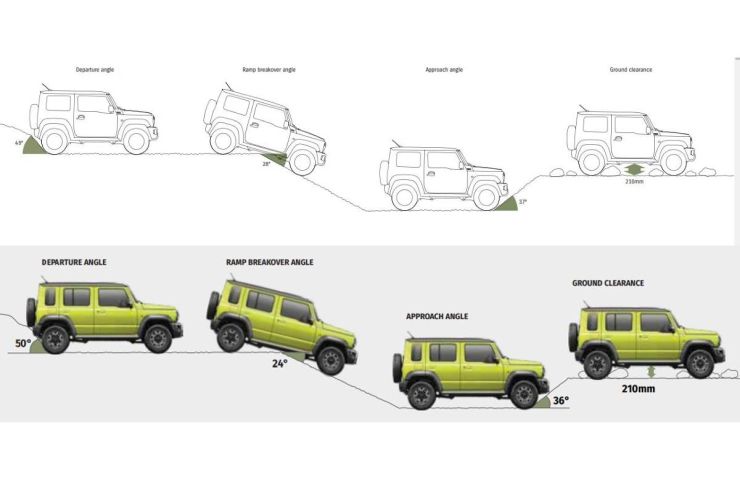 For those unaware, in off-roading there are four things that needs to taken care off while tacking any rough terrarain. The first in a approach angle. The approach angle is the maximum angle of a ramp or terrain onto which a vehicle can climb from a horizontal plane without interference. Then the second thing is the departure angle, the departure angle of a vehicle is the counterpart at the rear of the vehicle – the maximum ramp angle from which the car can descend without damage.

Then there is breakover angle. Breakover angle is the maximum possible supplementary angle that a vehicle, with at least one forward wheel and one rear wheel, can drive over without the apex of that angle touching any point of the vehicle other than the wheels. And finally there is ground clearance.

From the numbers released by Maruti Suzuki it has been noted that although there is a massive difference of 340mm between the 5-door and 3-door models wheelbase, the angles of approach, departure and breakover remain in close vicinity of each other. The Jimny three door approach, departure and breakover angles are 37, 49, and 28 respectively. Meanwhile the Jimny five door angles are 36, 50, and 24 respectively.

The Jimny is the Indo-Japanese automakers only offering the country to feature a capable off-road system. The SUV gets the Suzuki AllGrip Pro system features 4L, which is low-range transfer gear, 2H, and 4H four-wheel drive on-the-fly. The precise ratio of the low-ratio gearbox has not been confirmed by Maruti Suzuki.

IRS Backtracks, Says Ford Escape And Cadillac Lyriq Are SUVs After All

2023 World Car Of The Year Finalists Revealed: Meet The Contenders