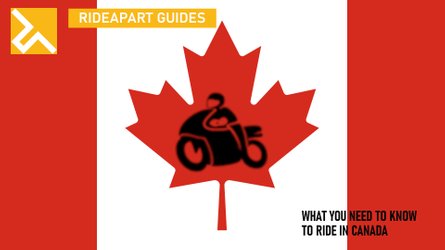 Taking a motorcycle trip outside your home country is a dream for many. If you get the opportunity, plenty of questions may come to mind. First, of course, you’ll need your valid passport—but what else do you need to know before you go?

In the interest of making international trip planning as painless as possible, this is the first in a new RideApart series to help you do just that. Here, we’re gathering facts and resources to inform your choices and make your next bike trip out of the country a successful one.

While RideApart is a U.S.-based site, we’re including information that pertains to all non-Canadian riders who wish to ride motorcycles in Canada. With that in mind, here’s what you need to know if you’re planning a motorbike trip to Canada from outside its borders, as of January 24, 2023.

What international travel documents do you need?

To enter Canada, the Canadian government requires acceptable identification documents. You may also need a visa, depending on where you’re traveling from. For example, a U.S. citizen wouldn’t need a visa, but an Argentinian citizen would. A valid passport that’s good for at least another six months beyond the date that you plan to enter the country is advisable.

Exact entry requirements for Canada vary by country, so be sure to check specific information on travel documentation and visa requirements for your country of citizenship before you travel. If you have children or grandchildren who are Canadian citizens, or who are Canadian permanent residents, then you may also be eligible for a Super Visa. This allows eligible persons to visit their children or grandchildren in Canada for up to five years at a time, and allows multiple entries for a period up to 10 years from the date of issuance.

For U.S. citizens, your valid passport that’s good for at least six months after you arrive in Canada is considered appropriate documentation. If you plan to travel between the U.S. and Canada often, you may also wish to sign up for the NEXUS program. It’s jointly run by the Canada Border Services Agency and U.S. Customs and Border Protection, with memberships lasting for five years. (Think of it kind of like TSA PreCheck for border crossing into Canada.)

What kind of license do I need to ride a motorcycle in Canada if I’m an international visitor?

If you have a valid license from your home country, it’s likely that you’ll be able to use it in Canada “for a short time after you arrive.” Rules may vary depending on the province or territory in Canada where you plan to ride, so you may want to check details at that level before you plan your trip.

The Canadian government also advises that if you plan to use a foreign driver’s license while in Canada, you should also obtain an International Driving Permit in your home country. This will translate your existing driver’s license into both French and English.

Insurance is a legal requirement for all vehicles driven in Canada. If you plan to ride your own motorcycle in Canada, check with your insurance carrier about coverage when riding internationally. If you plan to rent a motorcycle to ride while you’re visiting Canada, the motorcycle rental facility should have information about insurance on its vehicles.

What do I need to know if I want to ride my own motorcycle into Canada?

The Canadian government allows international visitors to temporarily bring their own vehicles into Canada for personal use. However, it must only be for your personal use while you’re there. The good news is, it doesn’t have to adhere to Canadian standards when being temporarily used in Canada for your own purposes.

That said, it’s worth noting that you can’t sell or dispose of your imported bike while you’re visiting Canada if it’s a temporary import. Your vehicle also can’t stay in Canada longer than you do.

What motorcycle gear is required by law to ride in Canada?

According to Motorcycle Tourism Canada, all provinces and territories in Canada require riders to wear motorcycle helmets that conform to DOT, Snell M2005, Snell M2010, Snell M2015, or ECE 22 certifications. In British Columbia, Alberta, Manitoba, and Ontario, adherents to the Sikh faith may be exempt from these laws and may instead wear their turbans.

Is there anything else I should know before I gear up for my Canadian riding adventure?

With the recent legalization of cannabis in multiple places, including Canada, there may understandably be some confusion about what is and is not advisable if you’re crossing the Canadian border.

According to the Canadian Border Services Agency, it is considered a serious offense to bring cannabis and/or cannabis products across the border into Canada. As of March 29, 2021, you may also be charged a hefty fine of up to $2,000 CAD if you do so. This includes CBD products made from cannabis or hemp.

That said, the CBSA requires anyone traveling to Canada with cannabis to declare it. If you have permits or licenses related to its use (such as for medical use), you should be sure to show those to the agent who examines your items. If you receive a penalty that you believe is in error, you can request an official review, either electronically or via postal mail.

The Canadian Border Services Agency also has an extensive list of what is and is not allowed for visitors who wish to transport firearms and weapons into Canada. According to current rules, visitors must have a valid purpose if they wish to bring non-restricted firearms into Canada.

This can include: hunting during hunting season, competition use, repair, in transit movement (such as traveling through Canada as the most direct route between points, like going from the lower 48 states to Alaska), or protection against wildlife in some of Canada’s more remote areas. We’ll include a link to the CBSA page about firearm and weapon importation into Canada in our Sources if you want to learn more.

If you’re crossing the border from the U.S. into Canada, the Canadian government has a helpful and frequently updated table of border wait times between the two countries. We’ll include a link to that site, as well as other helpful resources to help you plan your next motorcycle trip to Canada in our Sources.

Why Red Bull-Ford? Why not Porsche? And what about Honda? Horner explains all · RaceFans

Maserati’s James Rossiter: “Season Nine is a marathon, not a sprint”