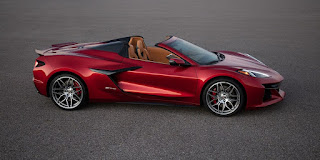 The entire Corvette line and its history have made an awesome impression on all of us here at West Chevy of Knoxville over the years, as it has spanned eight design generations and finally was successfully released on a mid-engine platform in 2019. The experts at Motor Authority provided a blog feature over the past week that talked about the hellacious power and how the 2023 Chevy Corvette ZO6 is “bursting at the steel seams.” They provided this video that illustrates how the Chevy engineers accomplished putting the most powerful naturally-aspirated V8 ever under the hood.

A naturally-aspirated engine will result in a much more solid and polished driving experience, and it shares a lot of similarities with the Corvette C8.R. The code name for the new engine is LT6, and part of the many demands during development was that it had to make more ready and raucous horsepower than the C7 Corvette ZO6’s 6.2-liter V8.

The LT6 features dual overhead camshafts as well as a flat-plane crankshaft: the latter has made an appearance in numerous Ferrari engines, as well as the Voodoo V-8 that was the capable and ideally brash power source on deck for the Shelby GT350 Mustang. Since there are now smaller and much lighter rotating parts, this design will have the trait of less inertia than a traditional cross-plane crankshaft, which provides more freedom for the engine to offer up its trademark rev without much difficulty.

Speaking of which, the LT6 also sounds like no other Chevy V8 before it, with a high-pitched wail that delves into pure Supercar territory. The flat-plane crank allows this LT6 to rev to 8,600 RPM, and was also specifically designed to properly partner up with tuning valves in the intake manifold that will help the all-important air flow moving in on cooling duty. This intake system also uses an occurrence called Helmholtz resonance that ups the amount of volumetric efficiency and makes for more of an aggressive and useful torque curve.

The result of all these hardcore specifics within the engineering realm is a very fast 670 horsepower and 460 lb-ft of torque. These stats are greater than the horsepower output of the C7 Z06 by 20 hp, but the C8 Z06 cannot necessarily match the C7’s 650 lb-ft of torque. All of us here at West love the fact that the Z06 has a much more track-focused attitude and stance. It also arrives with bolder styling cues and performance traits ready to scorch some serious pavement. The addition of the Z07 package allows you to enjoy the ultimate high-octane care package of extras with a tuned suspension, Brembo carbon ceramic brakes, and high-performance Michelin Pilot Cup 2R ZP tires.

Lamborghini Sends Off the NA V12 With Two One-Off Supercars

Why Many Drivers Should Be Looking To Use Body Cameras?