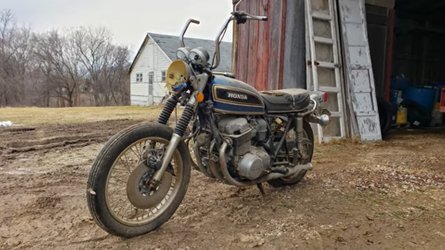 Psst, hey kid, do you like bike restoration timelapse videos? If that’s you, then you’re bound to appreciate the latest entry into the Brick House Builds YouTube canon. Over the course of many months, BHB has steadily been working on the revival of a 1975 Honda CB750 Four that had sadly been neglected for decades. The poor thing hadn’t run since approximately 1977, and that’s unfortunately not hyperbole.

Luckily, though, BJ of Brick House Builds apparently found the listing locally, took a look, and decided he had “a good feeling” about this bike. Good enough, in fact, that he brought it home—and honestly, it probably wasn’t the toughest decision in the world since he said that he only paid a crisp $100 for it.

At the time of purchase, he knew that it hadn’t been stored with spark plugs, and that the engine was seized. However, because it also wasn’t his first bike rescue, his optimism was also tempered by previous experience. Confident that he could get this survivor back on the road again, he got to work.

If you’ve been following along on the BHB channel, then you’ve probably already seen one or more of the detailed build process videos that have been posted as this project moved toward completion. From using electrolysis to clean out the slightly rusty tank, to fitting the perfect used saddle, it’s been quite a journey.

Since this bike was pretty original, and honestly not in terrible shape for its age, BJ opted to let its scars and marks remain to tell its story. Instead of opting for a full restoration, he decided that what this project really called for was a bit of a clean-up, not making it look like it traveled back in time to a ‘70s Honda showroom.

This timelapse squeezes the entire revival process into just under an hour, and gives a great overview of how each step along the way went. Even though the bike hadn’t run in decades, and even though the engine was initially seized when he brought it to his workshop, the bike itself was in pretty solid shape. Plenty of cleaning needed to be done, along with replacement of all the consumables you’d expect—o-rings, gaskets, and so on. A bit of rewiring work, some welding, and swapping over to a four-into-one exhaust system that sounds quite nice were also involved.

The end result looks and sounds like a winner. Even if you didn’t know anything about the history of the CB750, it’s the kind of full-throated growl that lets you know that it’s something special. If that carries through in a video, it must sound even better in person. Be sure to have a listen through headphones if you can.

What We Know So Far