It was sunny but -14°F (-25°C) this morning as we in Colorado experienced the effects of the Polar Vortex.  This weather phenomenon, last seen in 1990 apparently according to local weather sources, brought us extremely cold temperatures.

After I had geared up, I went to start Scarlett, my 2014 Ural Patrol.  She wouldn’t start, I thought perhaps the starter had finally given up the ghost after many attempts.  Instead I hooked up a car charger which I placed into jumpstart mode, and she fired right up.  I guess the battery was a bit weak?

Regardless, I moved out smartly and she ran fine during the 90 minutes or so I was out.  There was one occasion where she started making a “hooning” noise, like a moaning wind noise perhaps.  I stopped and the engine sounded fine as I revved it up and down while stopped.  The noise went away with a change in direction so perhaps it was the wind?

I drove over to the Rocking Horse neighborhood but no view of the mountains today due to haze and the Denver Brown Cloud.  So I drove back closer to home and got these pics instead. 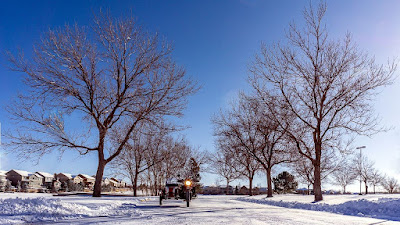 By this time, I was feeling a bit chilled and my toes were cold so I headed on home.  The temperatures had soared to -10°F (-23°C) at this point.

Traction was a bit iffy at times, and a couple of times I engaged 2WD in order to get moving after being stopped at snow covered traffic intersections.

The cold kept fogging up my eyeglasses and icing up with helmet’s visor too.  I rode the last mile or so on the way home, without my glasses!

Still, not a bad outing overall.  I must add another layer the next time, as the cold was penetrating my insulated jeans in spite of my long underwear layer underneath.

So, -14°F (-25°C) remains my personal best in terms of lowest temperatures experienced while riding.  The last time I’d seen temperatures this cold was near Loveland Pass, several winters ago!