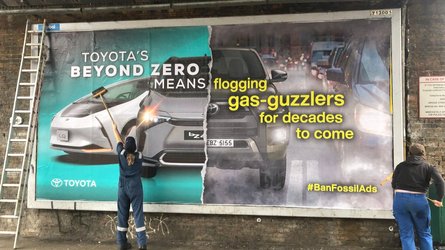 According to an article by Brandalism, various climate activists are going after BMW and Toyota for the misleading ads and tactics they use to pretend as if their vehicles are helping curb climate change. The groups have collectively posted over 400 billboards to bring the automakers’ deceit to light.

This comes as no surprise since Toyota has been at it for some time, even getting in some hot water in the past for its misleading claims about its electric vehicles that don’t need to be plugged in. They’re just traditional hybrids with a gas engine and tailpipe emissions, though Toyota insists it’s helping to combat climate change more than other automakers.

Electrek points out that BMW and Toyota are working to promote electric cars while also lobbying against them. These companies hope to continue producing gas cars well into the future, though their public posts often aim to tell a different story.

Last year, InfluenceMap ranked Toyota as the 10th worst company in the world when it comes to anti-climate lobbying. BMW didn’t fare much better, landing at number 16 in the ranking. Brandalism writes that in 2021, just 0.2% of Toyota’s car sales were EVs. The brand did bring a fully electric SUV to market in 2022 – the bZ4x – but it was recalled almost immediately due to a chance the wheels could fall off, and sales have been minimal.

BMW has been producing fully electric cars for years and enjoyed notable success with the iconic i3. However, many of its offerings that followed were simply emissions-spewing plug-in hybrid electric versions of existing gas-powered models. Since then, the brand has started to release a series of EVs, such as the iX and i4, but it’s also still heavily invested in its gas-powered cars, many of which would be considered gas guzzlers due to their high fuel consumption.

Artists and activists at Brandalism, which is based in the UK, posted the following thread on Twitter, which brings together 10 posts that highlight various billboards, images, and stories related to the cause:

As you can see, Brandalism shares that some 400 car billboards have been “hacked and replaced in 14 cities.” Be sure to click on the tweets embedded above to see the full thread. We’ve included a few of the tweets below for readers who don’t frequent Twitter, though you don’t need a Twitter account to view the thread on the social media site.

The group of activists is going so far as to ask government leaders to bring forth “tobacco-style” advertising bans on projects that are harmful to the environment. More specifically, they believe the government should be actively pointing out that large, gas-guzzling SUVs are a detriment and that automakers shouldn’t be advocating for them and making plans to continue producing and selling them for many more decades to come.

How to Deal With Breaking a Customer’s Car – Humble Mechanic