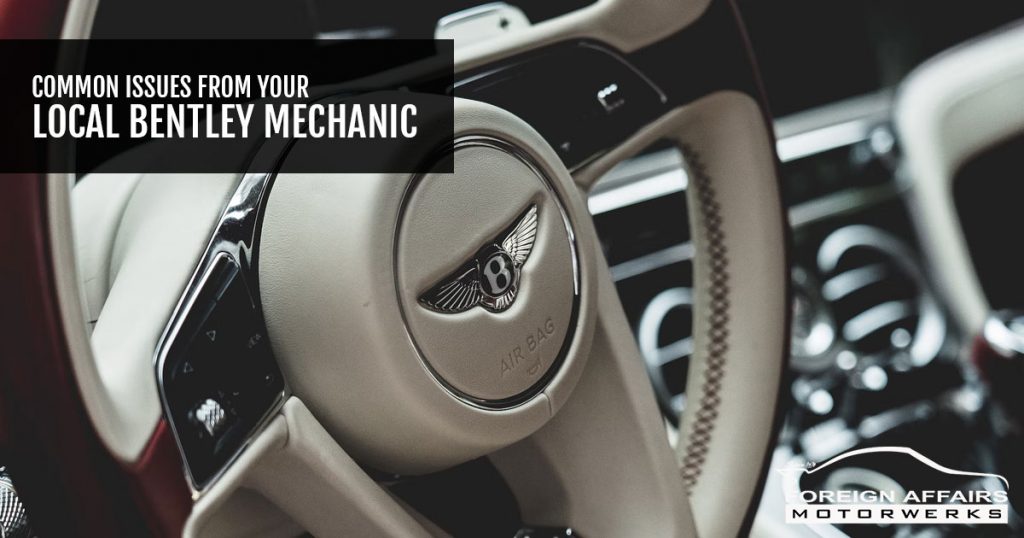 While it has been over 20 years since Bentley and Rolls Royce parted ways, Bentley is still one of the top luxury brands. Bentley has seamlessly blended luxury and performance in a way few others have, and has made owning one more desirable than ever before.

Before you rush out and buy your dream spec continental or flying spur, we highly recommend you familiarize yourself with some of the most common issues Bentley mechanics face outside of Bentley’s Maintenance Guide.

A common issue with Bentley’s new and old is suspension problems, and while Bentley has approached their suspension issue with different solutions, they tend to fail in the same way.

To ensure a smooth and luxurious ride, modern Bentleys are equipped with self-leveling air suspension. Unfortunately, as components age, air leaks do develop either in the air hoses or the airbags themselves. To compensate for this, the compressor is left to run constantly in an attempt to keep the suspension level. The constant running of the air compressor can cause it to fail.

An easy test to check the condition of your Bentley’s air suspension is to raise the ride height to the maximum before you park the car for the night. In the morning, start the car and check the ride height. If it dropped more than an inch and a half, you may need to get your suspension pressure tested.

Before Bentley started using air suspension, both Bentley and Rolls-Royce had different approaches to achieving a luxurious and smooth ride. Mineral oil suspension worked in a similar way to modern air suspension. Instead of air, mineral oil would be pumped into each individual shock in order to adjust both ride height and firmness.

Mineral oil suspension is just as susceptible to leaks as its air-powered counterpart, with the added maintenance of needing to top and replace the oil regularly.

The first-generation Continental GT and Flying Spur are one of the best ways to get into a modern Bentley and experience a W12 engine. Unfortunately, both models were based on Volkswagen’s D1 platform. In an effort to make the vehicles feel more luxurious and reliable, almost every aspect of the car was controlled by a computer module.

These computer modules have not stood the test of time and routinely fail, taking several systems down with them. Having several warning lights flashing and not being able to use the features that make a Bentley so special, does detract from the luxurious feel.

Volkswagen-era Bentleys have electric motors that drive a mechanism to raise and lower your windows. These motors are known to fail from time to time and can be identified by a hissing noise when opening or closing windows. Unfortunately, Bentley does not sell the motors by themselves, and needs to be replaced alongside the motor’s ECU.

Both the Continental GT and Flying Spur seem to have issues with the third brake light (the one mounted behind the rear windshield). The plus side is that the OBD2 system on your Bentley will notify you when this light fails.

Bentleys are timeless, special cars with their own set of quirks and struggles. Bring your baby down to Foreign Affairs Motorwerks, your place for luxury car maintenance. One of our Bentley experts will be more than happy to help you keep your Bentley luxurious and reliable. Don’t hesitate and contact us today at (954) 746-0488.