So here’s the question: If your friend wants to borrow your car, can you toss them your keys without rattling off a list of issues they need to be aware of? We’ve all heard them:

You have to slam the passenger door to close it.

The temp gauge may read high or not at all–either way, ignore it.

You have to wiggle the ignition switch if the turn signals don’t work.

Of course, the horn doesn’t work. What car over 10 years old has a working horn?

And never, ever use the parking brake.

While idiosyncrasies like these may be effective at keeping your friends from borrowing your ride, they’re a clear sign that your car needs some sorting.

Sure, you’re used to all of those annoyances, and maybe they don’t seem like a big deal. But you’d be amazed at how much more you’ll like your car if you sort them out. And maybe you’ll even feel a little better about yourself–the sense of accomplishment when finishing a project can be quite satisfying.

Here at Grassroots Motorsports, we drive a lot of cars, and very few of them are truly sorted. Sorted doesn’t necessarily mean finished, however–just that all the details are right. A car with rough bodywork can be sorted, as can a car with a new turbo that hasn’t been tuned to its full potential.

When we sort a car, we start at the driver’s seat and consider everything we touch. Do the pedals all feel right? Is the steering wheel centered? Does the shift knob rattle? How about the mirrors, the visors and the console lid? Do they all fit and function correctly?

Then we move on to driving and tuning. Does the car start on the first try, warm or cold? Does a nice, fast idle settle into a nice, slow idle? Does the clutch grab at the right spot? Does the car accelerate without hesitation or loading up? Do the brakes bring it to a smooth, confident stop?

We’re assuming the car doesn’t pull to one side or another while accelerating, cruising or braking. We’ll also take note of rattles and squeaks.

If the car is new to us–or if it’s been a big project–we also go through a full nut-and-bolt procedure: We jack up the car to inspect and tighten every nut and bolt we can find. We lubricate anything that needs it, too.

Then we move to the engine bay and other areas of the car to do the same thing. Not only does this help ensure the car is safe and sorted, but it usually reveals something that isn’t routed correctly or that suffers from hasty repairs made in the past.

After the nut-and-bolt procedure, we go on another drive and hope we’ve solved the rattles and squeaks. If not, we do our best to find and address them one at a time.

Finally, if the car warrants it, we move on to cosmetic issues. We start with a very thorough cleaning, then address the areas that need more attention. If trim can be polished, we hit that. If lenses are cracked, we replace them–and maybe even broken or missing emblems, too. Sometimes, we touch up the paint on some trim with a rattle can or a brush. While whole paint jobs can get very pricy, we’ve found that having a body shop touch up some trouble spots can be an affordable way to make a huge difference in how a car looks.

Yes, It’s Worth It

Generally, all of this work takes 5 to 20 hours. You make a list, then cross off things. It’s not really that hard.

Considering you may have hundreds of hours in a project car, spending those last few hours on some sorting doesn’t seem so bad. If you’ve never done it, you’ll never know the satisfaction of tossing your friend the keys without naming a single issue.

And once the sorting is finished, we address issues as they arise so that it stays sorted. If the issues build up, we can feel the fun being sucked out of the car–fun beats sucking all day long. 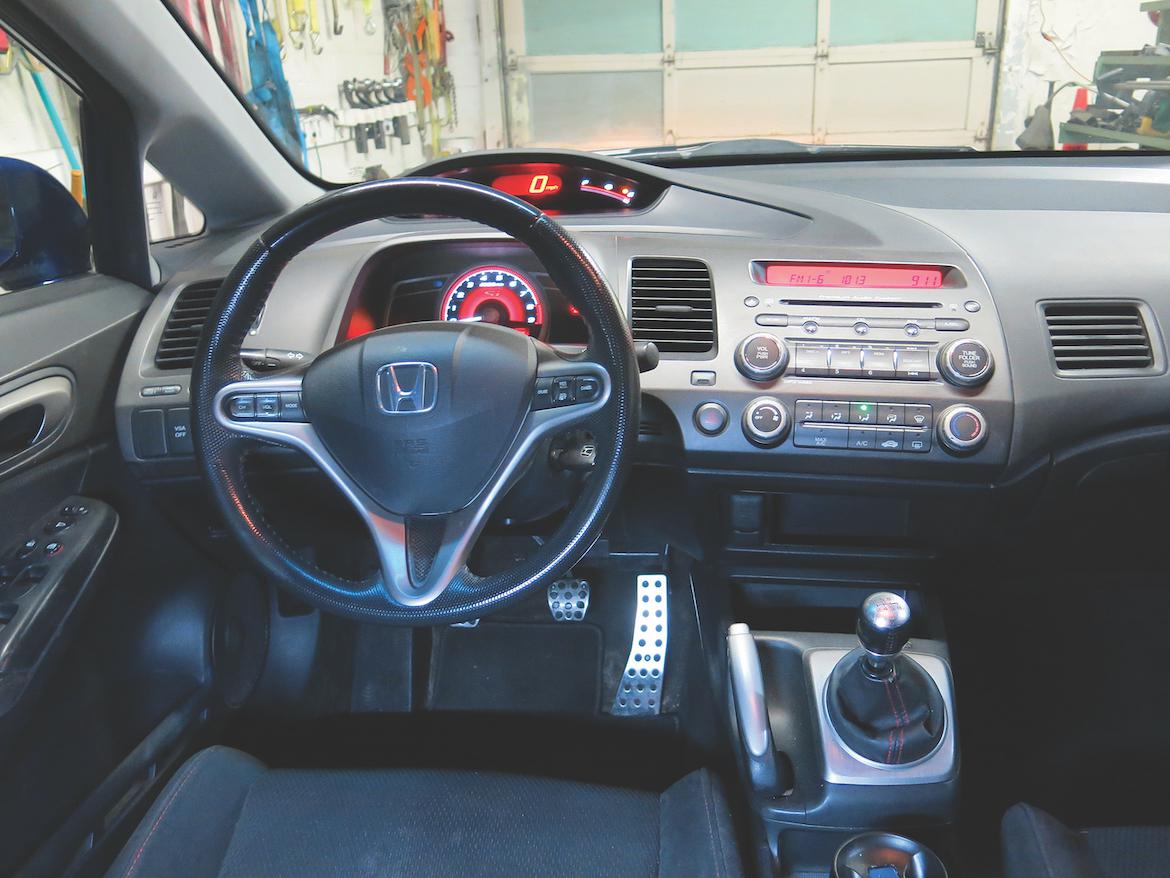 1. We started the sorting process at the driver’s seat and made sure everything we touched felt great: shifter, switches, mirrors, etc. In this case, everything but the console lid and passenger visor passed the test. 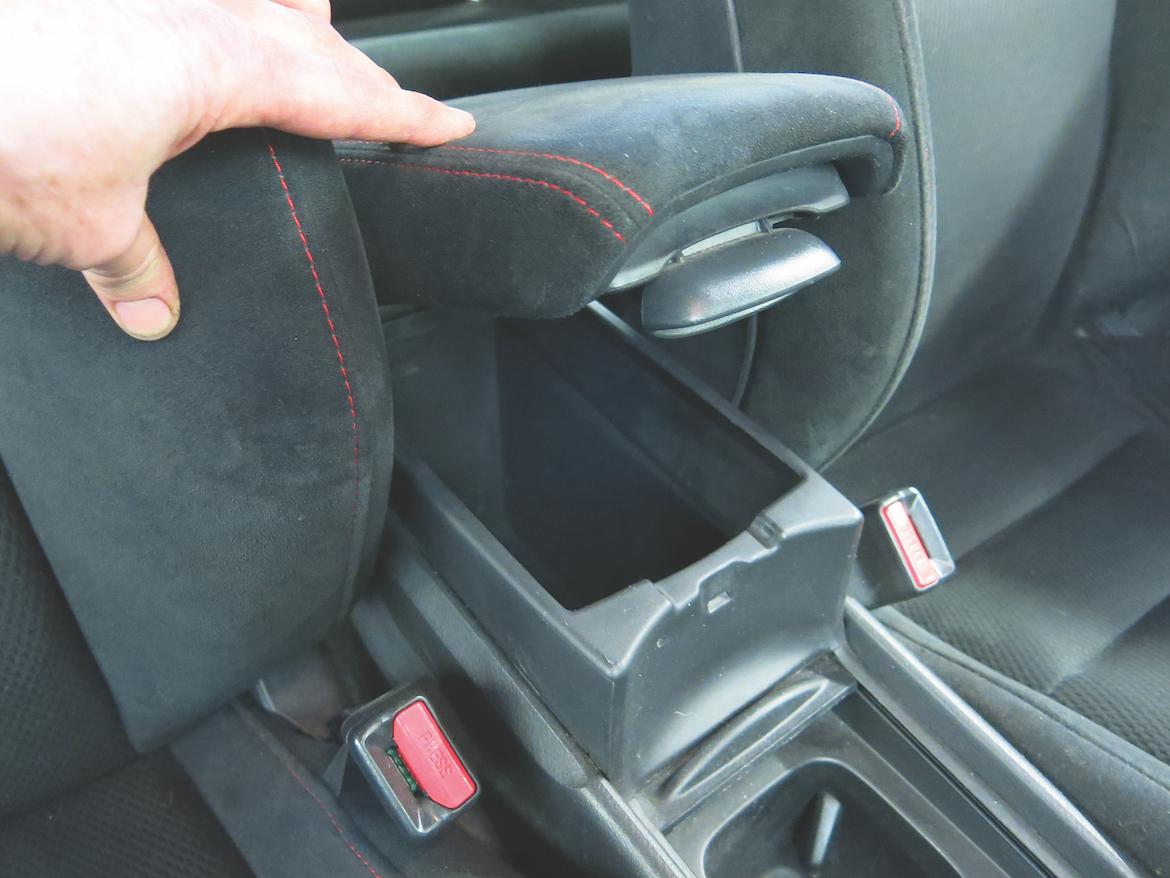 2. The console latch was broken, and the lid would pop up unexpectedly while driving. We sourced a new latch for $17, but a junkyard one would have cost even less. 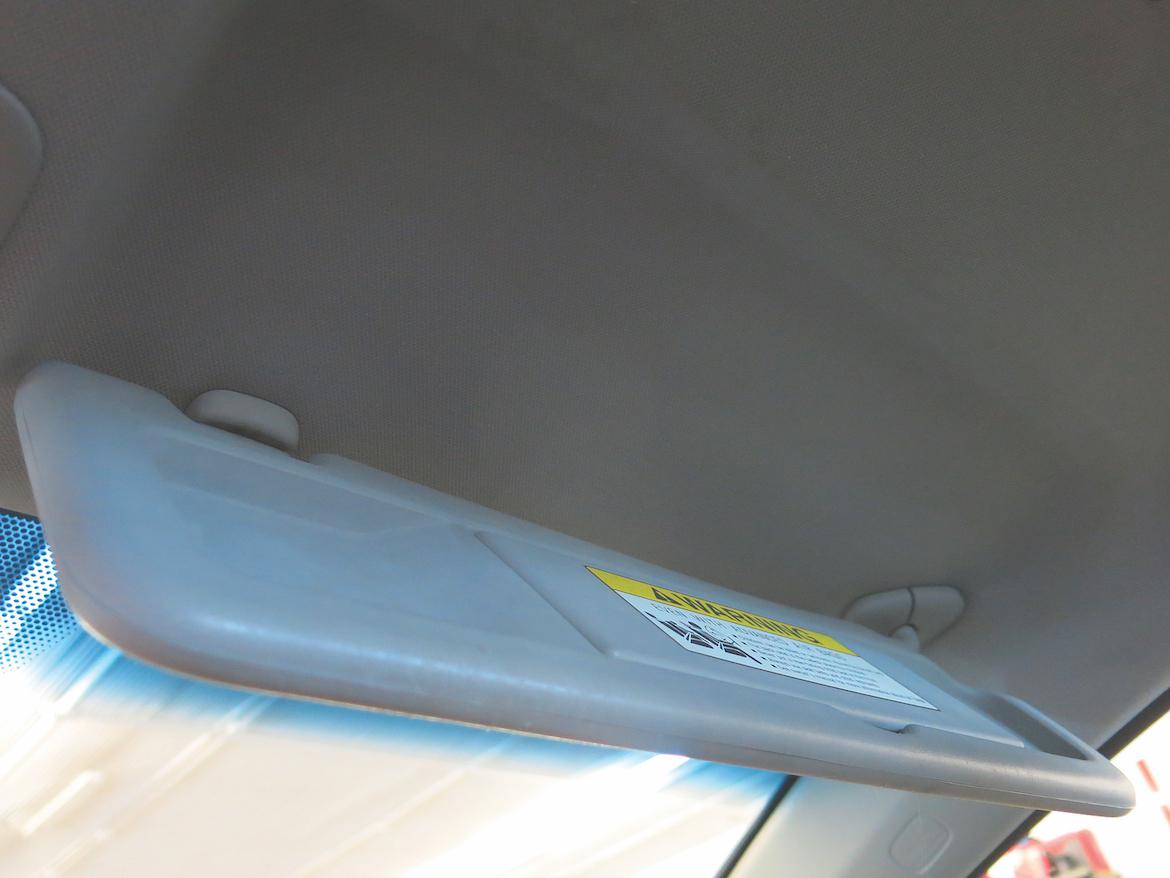 3. A common problem on eighth-gen Civics: The visor had broken and wouldn’t stay up. Junkyard pieces seem to break quickly, so we sprung for a new one–about $60. 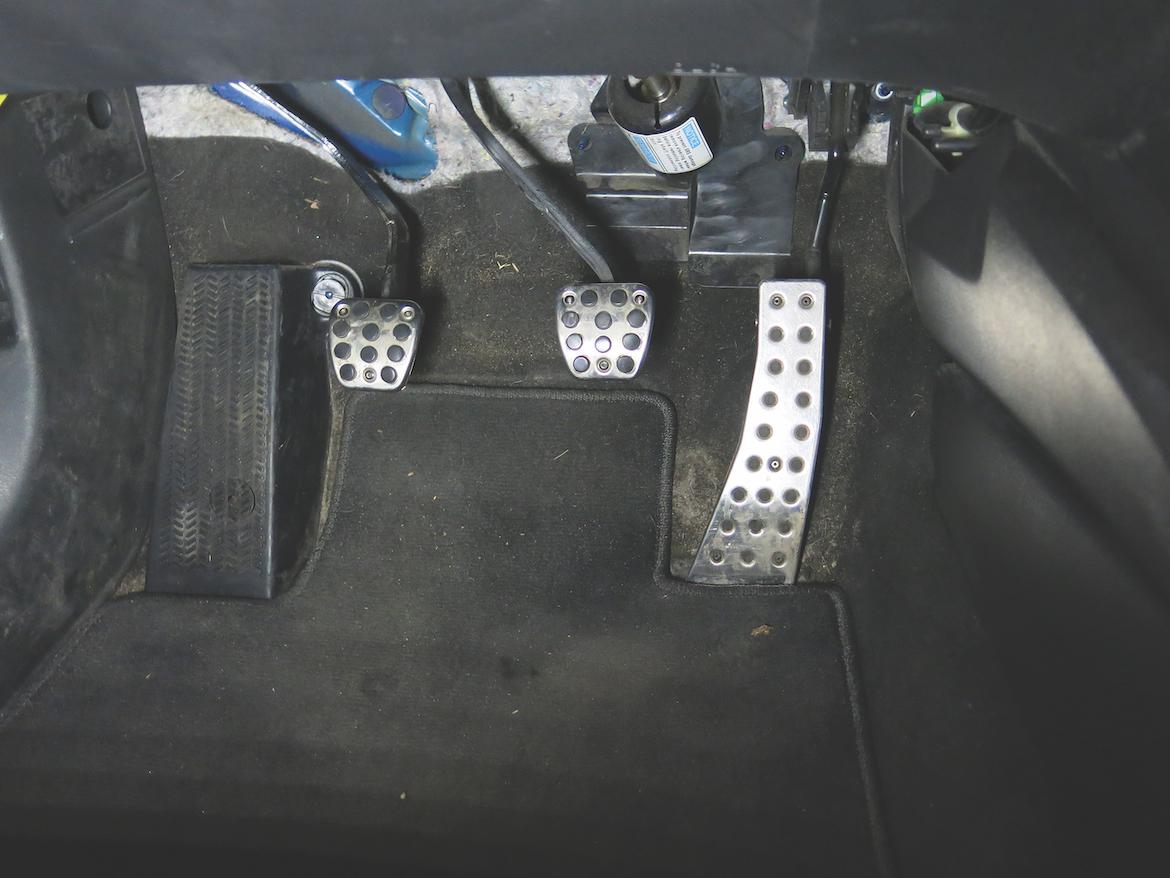 4. While we’re in the driver’s seat, we pay close attention to the pedals. We want our clutch and brake pedal to feel just right and have an eighth to a quarter of an inch of free play. Then we check the accelerator pedal to ensure it has just a little free play and allows the car to reach full throttle. We also make sure there’s no risk of overtravel with the accelerator. In the case of our Civic, the clutch felt off and grabbed too close to the floor. 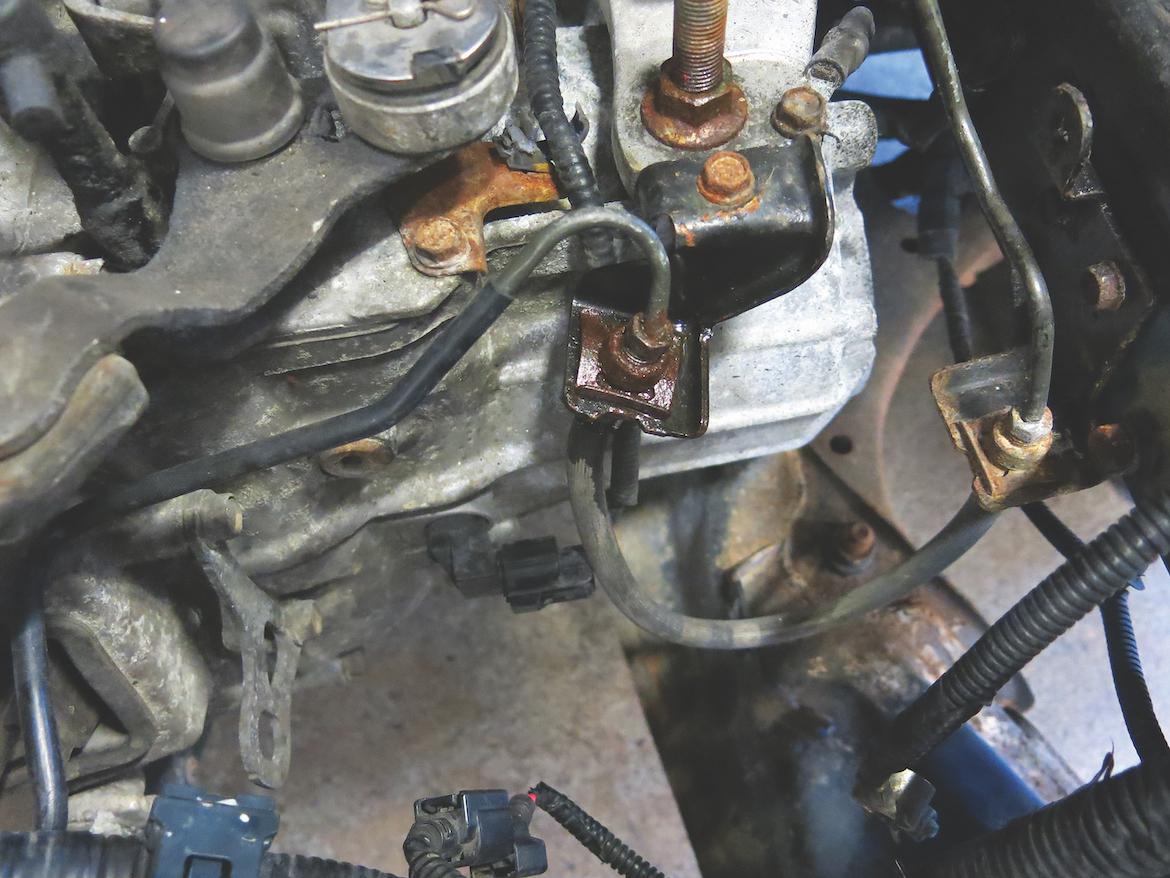 5. The culprit behind the clutch issue ended up being a hard line that was damaged in the accident. It was an easy fix, and a nice pedal feel returned. 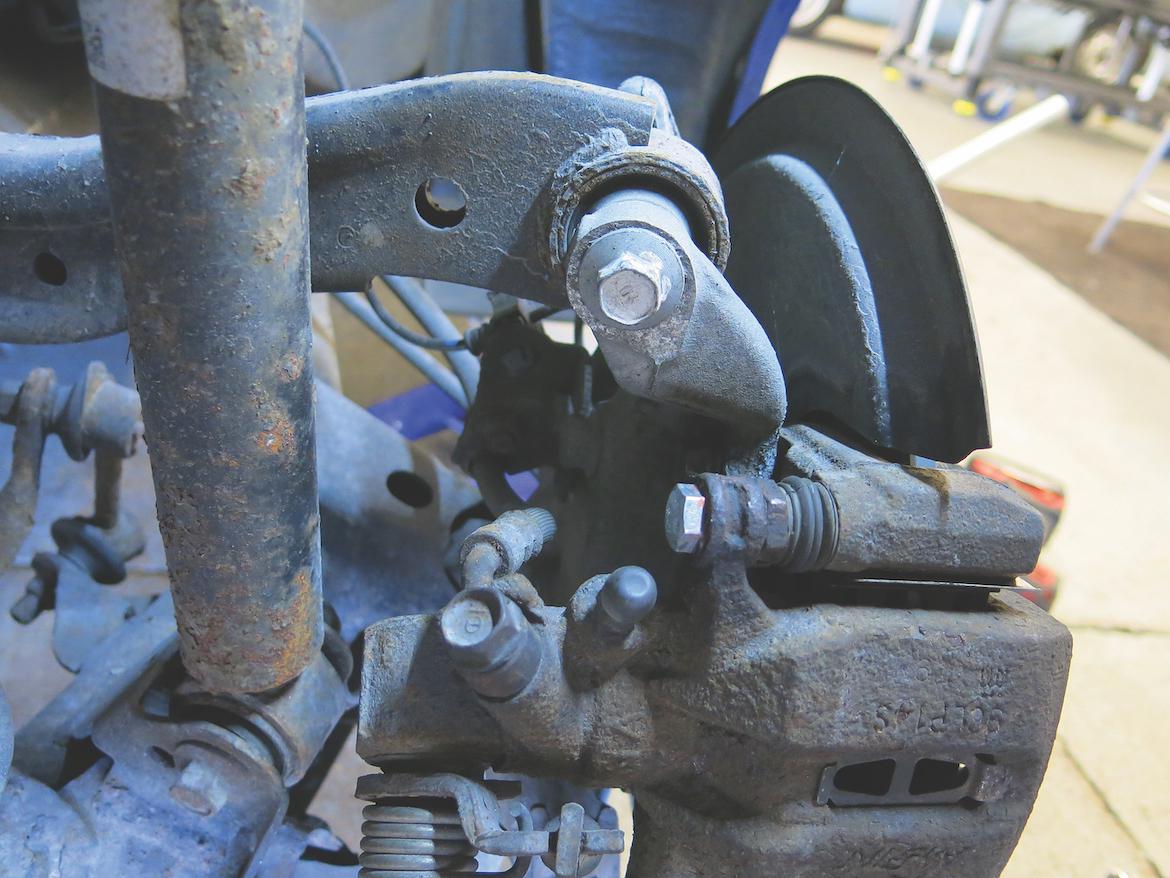 6. Next up, we checked every nut and bolt on the underside and found a few loose fasteners. We also found a surprise: The upper bolt on the right-rear caliper was missing. Now we’ve got a shiny new one doing its job. 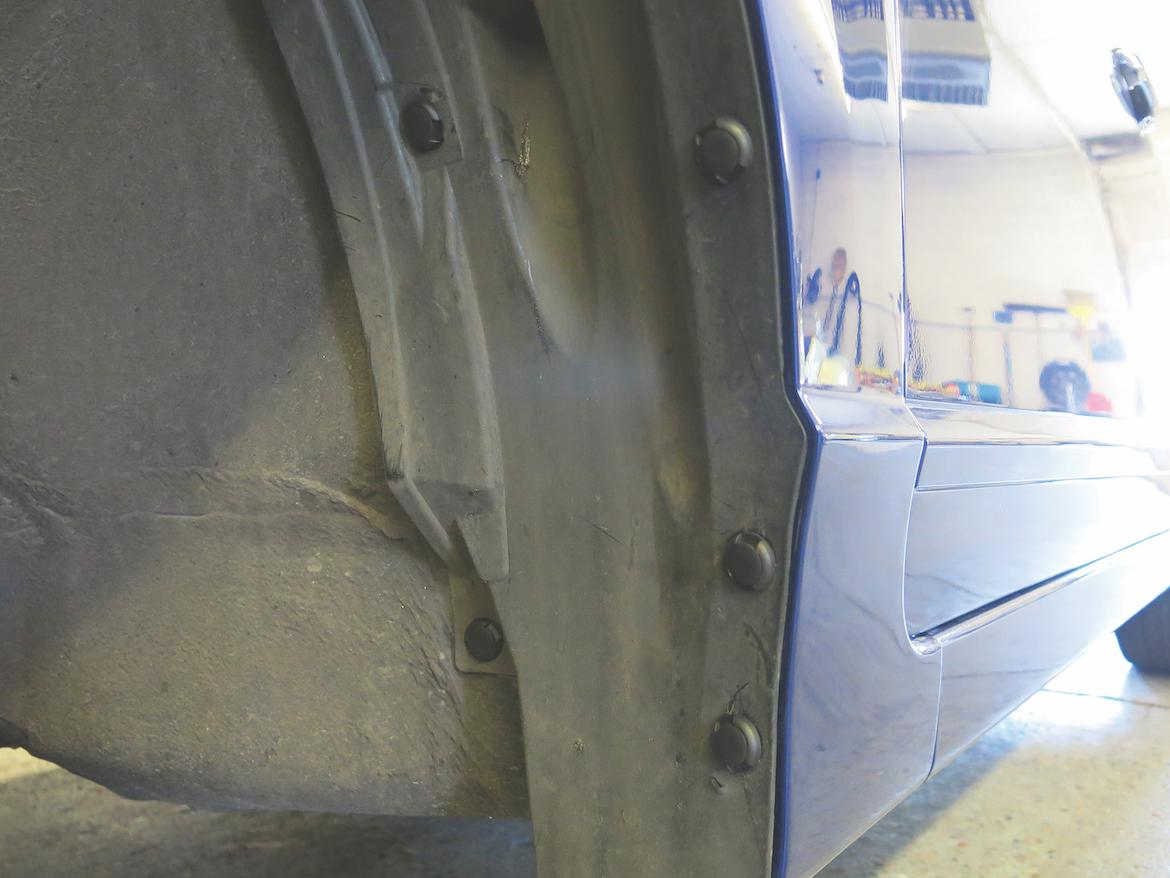 7. While we had the car in the air, we inspected the clips that hold the wheel liners in place. Just about every car we work on is missing several of these clips, overburdening the fasteners that are still present. We also tend to find a lot of universal replacement clips that don’t work very well. We sprang for the factory clips, which are a little pricey–usually a buck or two each–but do the job so much better. 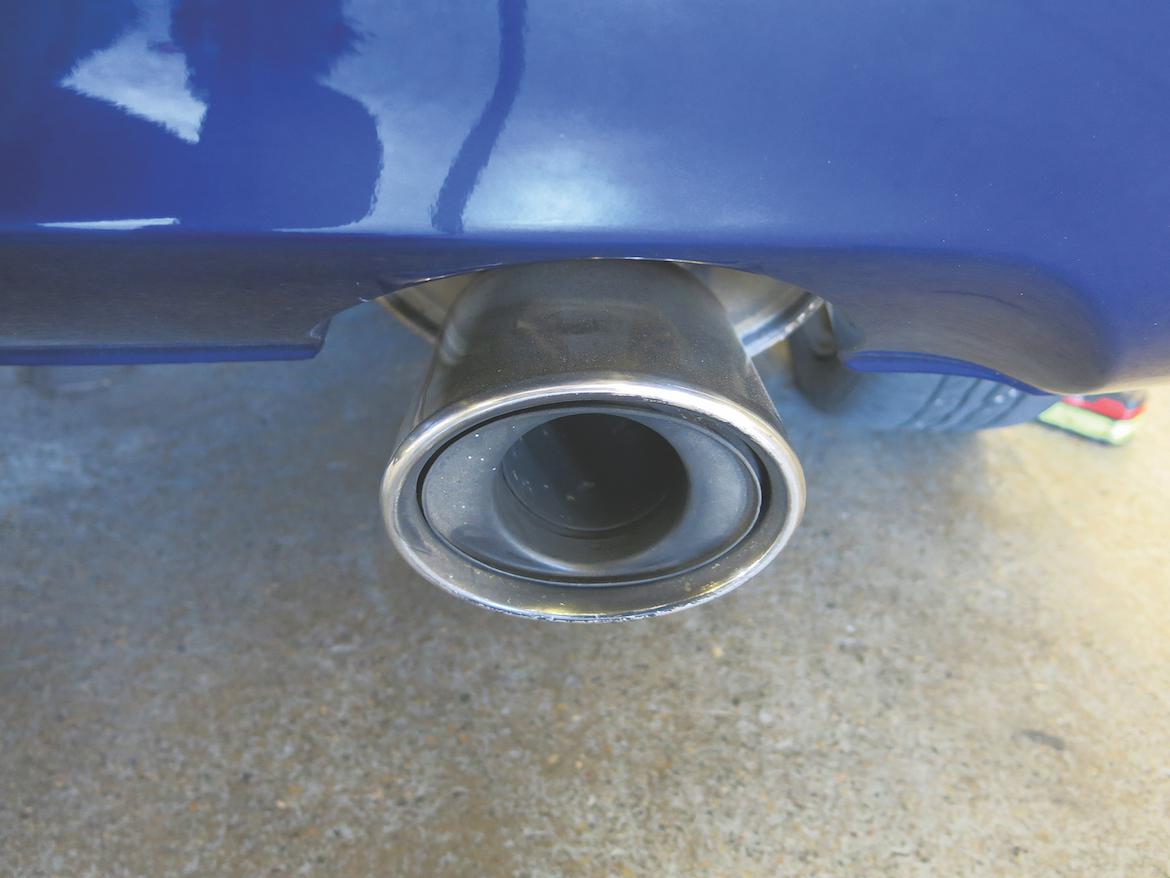 8. That rattle from the back of the car that was driving us nuts ended up being a loose bolt on the tailpipe tip. 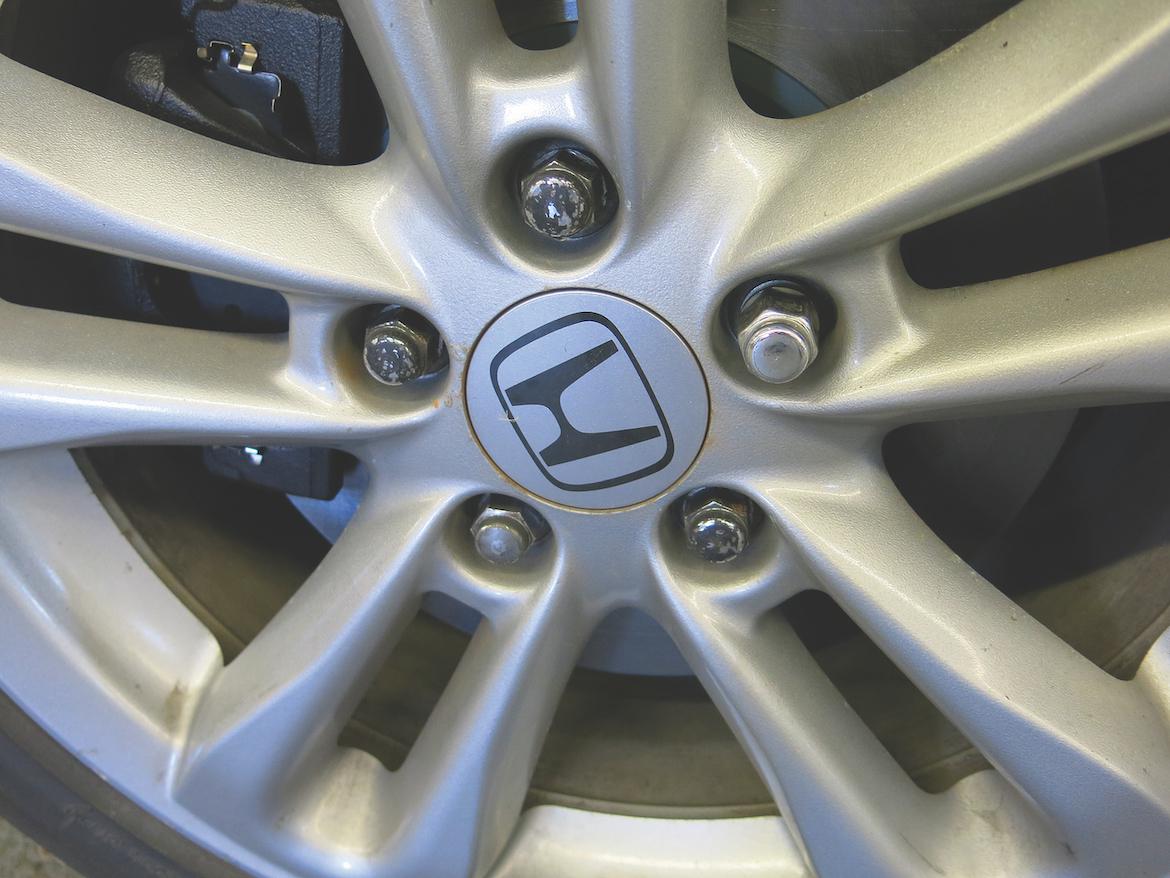 9. On to cosmetics: At some point in the past, the wheels and lug nuts had been dipped black. The lugs were still black, but one had been replaced–its size and shape just didn’t match. A little time with the buffer made four of the nuts look new again, and we found a matching fifth nut to replace the oddball. 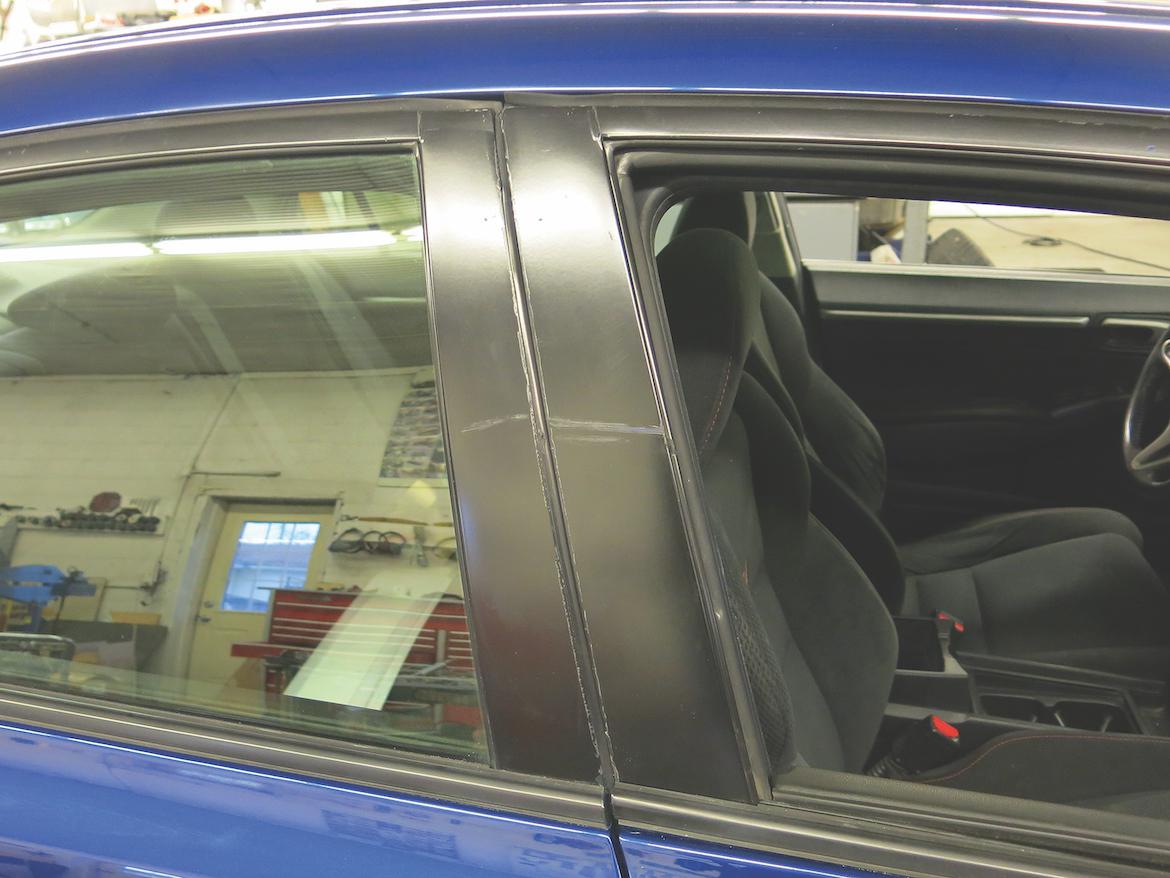 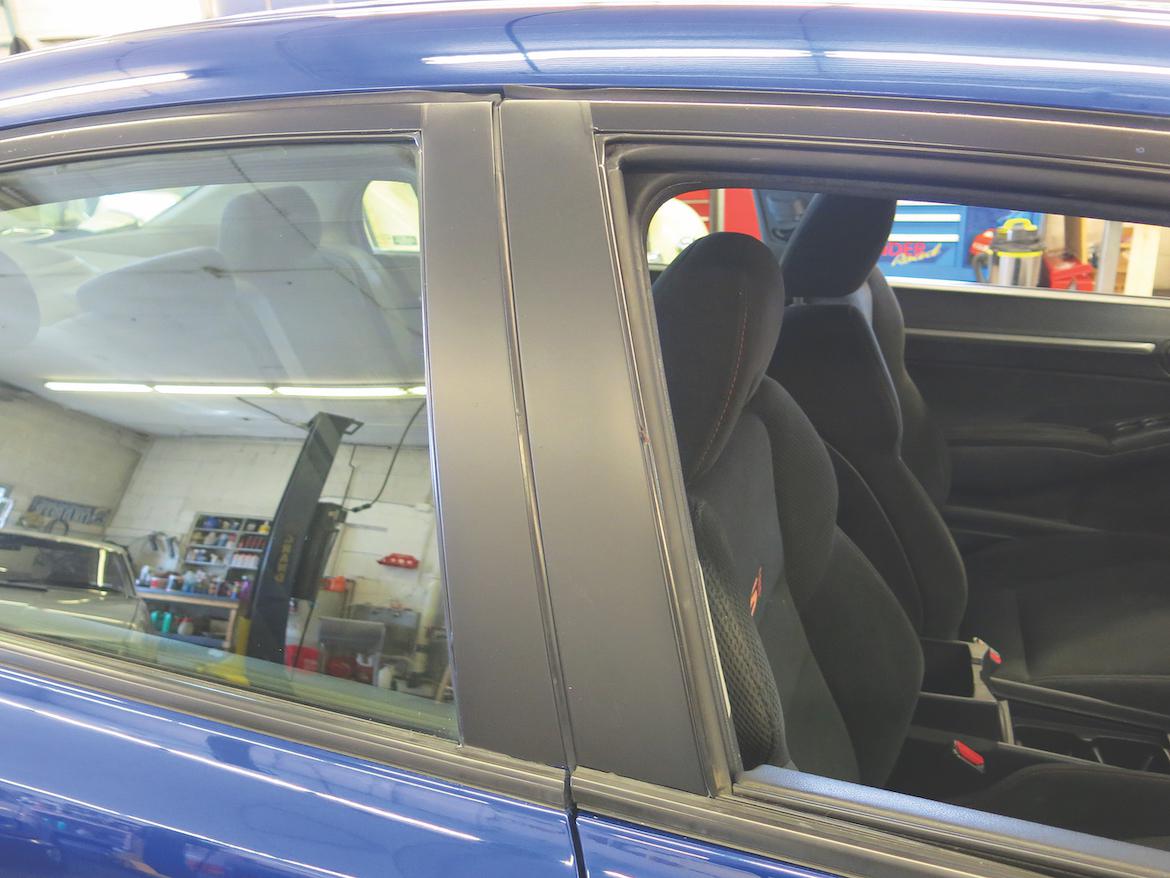 10, 11. The car had a scratch in the vinyl window trim. Precut pieces were available from Honda for $17. We could have found some universal vinyl and cut it ourselves for less, but we took the convenient route, saved a little time, and got a perfect match. 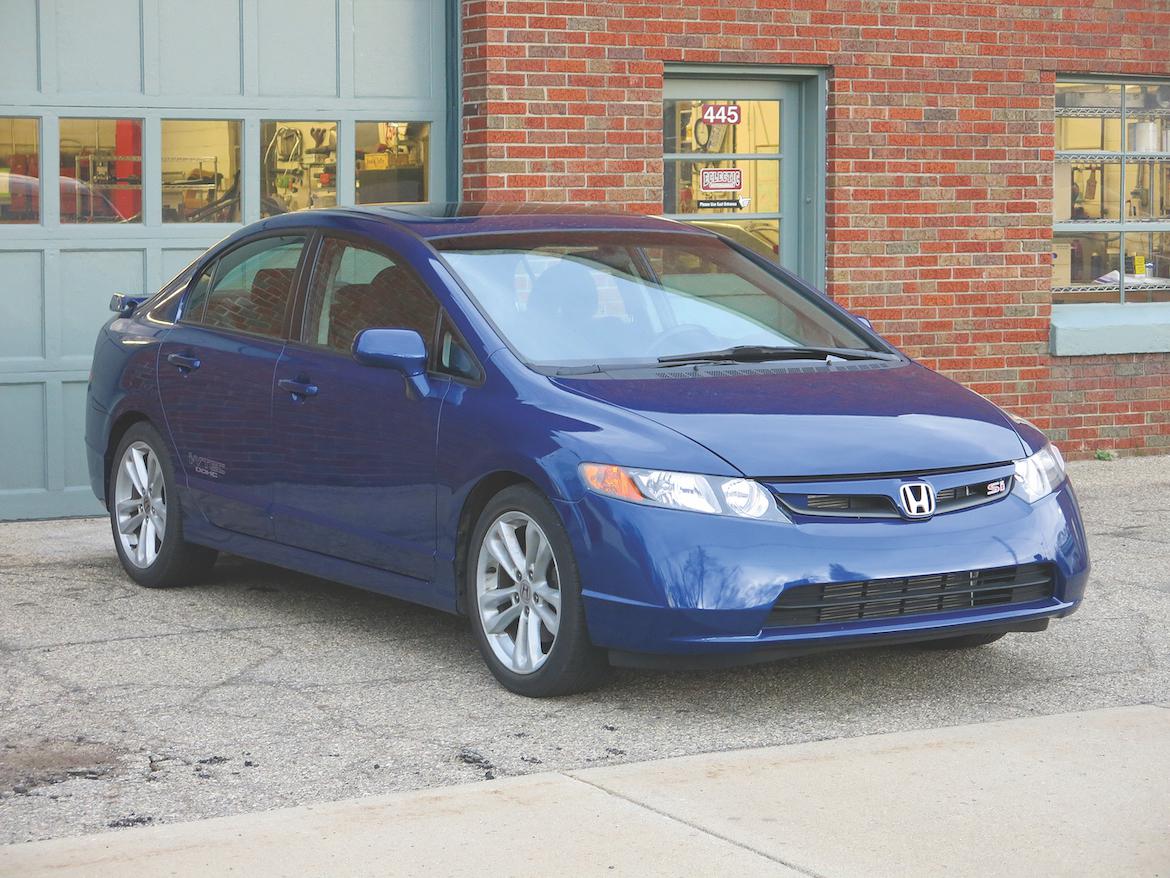 12. All finished, the car looks and drives like new again. While we were happy with the car before sorting out the last details, we’re overjoyed with it now. Maybe now it needs a new set of wheels….