As the time to Martha’s retirement from full-time work is down to a matter of months now, it was time to get serious about setting up her Honda CR-V to be towed by Uma, the URRV.

I went ahead and ordered the tow plate (ITEM # C48FR $464) from e-trailer.com and the ReadyBrake brake cable assembly (RB-011 $93) and break-away cable assembly (RS-5000 $129) to use along with existing components left over after the Sammy went away.

Yesterday, Saturday, it was a “joy-filled” 10+ hours of working to install the tow plate from Curt,  and also install the brake and breakaway cables from the front of the car to the driver’s compartment.

Of course, I managed to break some of the brittle plastic fasteners that held the plastic bits to the car that had to be removed.  Let’s just say, its not as easy as the video below made it look.  However, the video was quite helpful otherwise.

Here’s the base plate that replaced the stock front bumper on the CR-V: 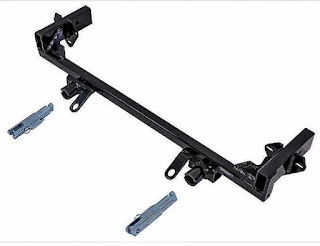 The unit is quite “beefy”.  I wouldn’t be surprised if it was stronger that the stock bumper. 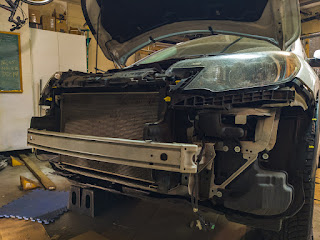 Stock bumper underneath the plastic fascia 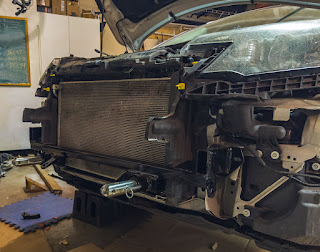 Some notes about the installation:

Removing and replacing the plastics, for me, were a PITA.  Since the car is over 8 years old, the plastic fasteners were quite brittle.  It also turned out, though similar looking, there were two distinct fasteners which I should have segregate according to location as I removed them.

Finding the location to drill holes in the driver compartment’s firewall would prove quite difficult until I checked this video’s example:

The point being, the holes are not directly behind the brake pedal arm, a bit offset but the cable still seemed to move fine within its protective sheathing.  More testing to follow of course.

Very difficult to see the opening in order to “fish” the cable end into the driver’s compartment.  The engine and suspension components are in the way of one’s eyes and movement for one’s hand/arm is very constricted.

Fortunately for me, Bob W. was available to help with the tasks involved.  He’s one of my neighborhood friends.  Installing the two cables would have been impossible for me alone.  But we got it done!

Meanwhile, his majesty the cat (Owen) reigned unconcerned by all this human activity and rests in comfort: 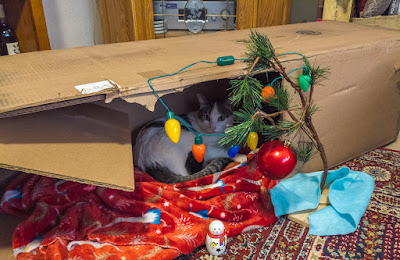 Today, during the afternoon, I drove over with Martha in the CR-V (from this point on to be known as the Toad) and we hooked it up to the RV using the Blue Ox tow bars we got with the Sammy.

I wanted to test the Blue Ox AutoStop device’s ability to pull the brake pedal in the Toad when it detected via inertia and pressure that the RV’s brakes were being applied.

The first test went “weird”.  It was doing everything opposite of what I expected.  It would pull the wire, thereby pulling the brake pedal down in the Toad while moving forward with the RV!

The expected behavior was that it would hang “slack” while the RV was moving, and then tighten up when brakes in the RV were applied thereby inducing the Toad to push forward under inertia.  Once the AutoStop detects this pressure, it reels in the wire that is connected to the ReadyBrake cable connected to the Toad’s brake pedal, actuating the Toad’s brakes to help stop the Toad.

So, as I was disassembling the setup to take it home to examine it for that weird behavior; when it occurred to me that I might have installed it upside down.  You see, I remembered that the manual states the preload adjustment setting on the Autostop should be on the driver’s side when correctly installed, it wasn’t.

So, I got it turned right-side up, and we tested again.  Lo and behold it seemed to work exactly as desired/expected.  Martha braked the moving RV (we were only going a few MPH) and I watched the ReadyBrake cable’s end tighten up as everything came to a stop.

More testing to follow this week.  I was concentrating on the cable’s movement so didn’t see if the Toad’s wheels locked when braking was applied.  Pretty sure it did, but I want to see it.

I also have to figure out how we managed to drain the battery as we did the testing!

As I was putting things away, Martha reported the CR-V not starting.  Dammit.

After some hurried troubleshooting thinking the towing had broken things, Martha googled that perhaps the battery was shot even though I seeing the headlights light up.

So, we hooked up the jumper cables to the URRV and the Toad started right up!  Dammit.  So now I need to get the battery checked out and figure out the fuse to remove when in towing mode to prevent future battery draining while the Toad is being towed.  The manual states the fuse number, and RichardM commented I could install a bypass switch or simply disconnect the battery while towing.

More testing to follow as I mentioned but it’s looking good so far!  My thanks once again for the ready input/feedback provided by RichardM as I tested and troubleshot.

The CR-Vs battery was checked out by a tech at Autozone and pronounced healthy so draining it accidentally as we did yesterday did it no harm.

I’ve ordered a charging kit for the CRV (RM-156-25 $47) which will take power from the URRV and keep the Toad’s battery topped off during towing operations.  Thanks to RichardM’s feedback, will also get 20ft of 10AWG ($50) cable with SAE connectors to provide power to the charging kit.  No more worrying about removing fuses.

I’ve also ordered a 6″ drop hitch (RM-076 $101) to lower the Autostop device so that it’s level with the mounting points on the Toad.  You’re not supposed to have more than 3″ difference up/down from level. 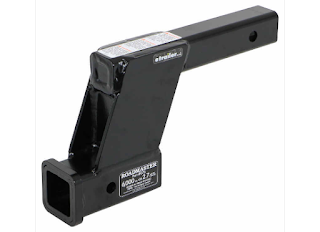 After all the above is done, a simple two pole switch to bypass the wire leading from the brake pedal switch to the brake lights to avoid confusion when people following the Toad see steady brake lights but the magnetic tow lights on the roof are indicating turns.

Lamborghini at the Goodwood Festival of Speed

Tips & Tricks: How To Detail Your Car’s Exterior Like A Pro