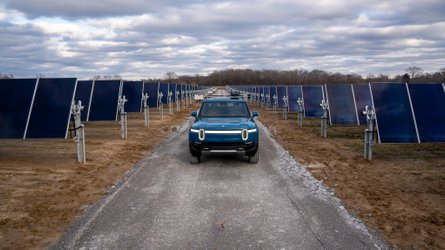 With a population of around 10,000 people, the city that has a 70-foot replica of the Eiffel Tower in Paris, France, is the first in the United States to benefit from Rivian’s solar-powered EV charging stations.

Dubbed Waypoints, Rivian’s top-up stalls are powered by a nearby solar farm that has a total capacity of 1 megawatt (MW), with the company aiming to further finance a larger 6.75 MW project that will power all Waypoints chargers in the state.

“What that means is that we are connecting the dots between a charging station for electric vehicles brought by Rivian, which makes electric SUVs and electric trucks right here in the US, and the solar project that is going up in Henry County,” said Laura Zapata, the CEO of Clearloop for the local TV news station.

The Paris, Tennessee chargers are equipped with J1772 plugs, which means other EVs can top up their batteries here, not just Rivians, as the local news report showed with the help of a Hyundai Ioniq 5.

According to Rivian, the Waypoints chargers are Level 2 stations open to all EVs, capable of delivering up to 11.5 kW of power, located “at shops, restaurants, hotels, parks and more.” They’re powered by 100 percent renewable energy and the American company aims to install over 10,000 of them across the US and Canada.

Rivian’s more powerful charging network is exclusive to its vehicles and is called the Rivian Adventure Network, which consists of stalls capable of delivering direct current (DC) at rates of up to 200 kW (and over 300 kW in the future). The EV carmaker plans to debut over 3,500 fast charging stations in the United States and Canada, powered entirely by renewable energy.