MALIBU, Calif. — If heavy death metal music were a car, it would be the Lamborghini Huracán STO. This is not your run-of-the-mill Lamborghini. It doesn’t have all-wheel drive. The floor and doors are essentially bare carbon. It has a complex clamshell front end/hood you manually open with a plastic prong — under it, there’s barely room for a racing helmet. There are only three drive modes, a pittance for a modern supercar. A super-low, zero-forgiveness full carbon fiber front bumper/splitter is fitted that will torment your mind on every grade change. Its dry weight (the only one Lamborghini quotes) is only 2,942 pounds.

That last bit — its low-for-a-Lambo weight — is the secret ingredient in what makes this STO drive like a special machine. Forget any stereotypes you may have about today’s Lamborghinis being the porky, easier-to-drive Italian supercar. The STO is pure, old-school Lambo. It looks those preconceived notions in the face and slaps them aside as quick as the 5.2-liter V10 can rev to its 8,500 rpm redline. That is, very, very quickly.

The death metal begins as soon as you drop into the carbon buckets. In proper race car fashion, there are no traditional grab handles on the bare carbon door. Instead, a flexible piece of fabric is fashioned as a pull, and it works quite well. Getting out could be confusing for those new to track-focused machines like the STO, as the red strap suspiciously poking out of the door is actually a handle that you pull to activate. Adjusting the seat is all manual work — every extra electric anything would just add weight.

You’ll quickly learn that there’s a reason carpeting is the floor material of choice for every car out there, as the optional $4,600 carbon fiber floor mats optioned on this STO make for a Slip’N Slide-themed pedal box. It can be acclimated to (your shoe choice has never mattered more), but good old-fashioned carpeting can’t be beat. Everyday functionality was the last thing on Lamborghini’s mind when creating the STO, though. One quick look at the rearview mirror makes this abundantly clear. While you’ll see flashes of trailing traffic in between the louvers of the STO’s engine cover, this design largely limits rearward visibility to the side mirrors. And before you ask, no, it doesn’t have blind-spot warning. The view out the letterbox windshield (that happens to be 20% lighter than the Performante’s windshield) is at least unobstructed, but there’s no softening the total lack of visibility in this car. If you want to easily see out of your high-performance track machine, go buy a Porsche 911 GT3 or Acura NSX Type S. 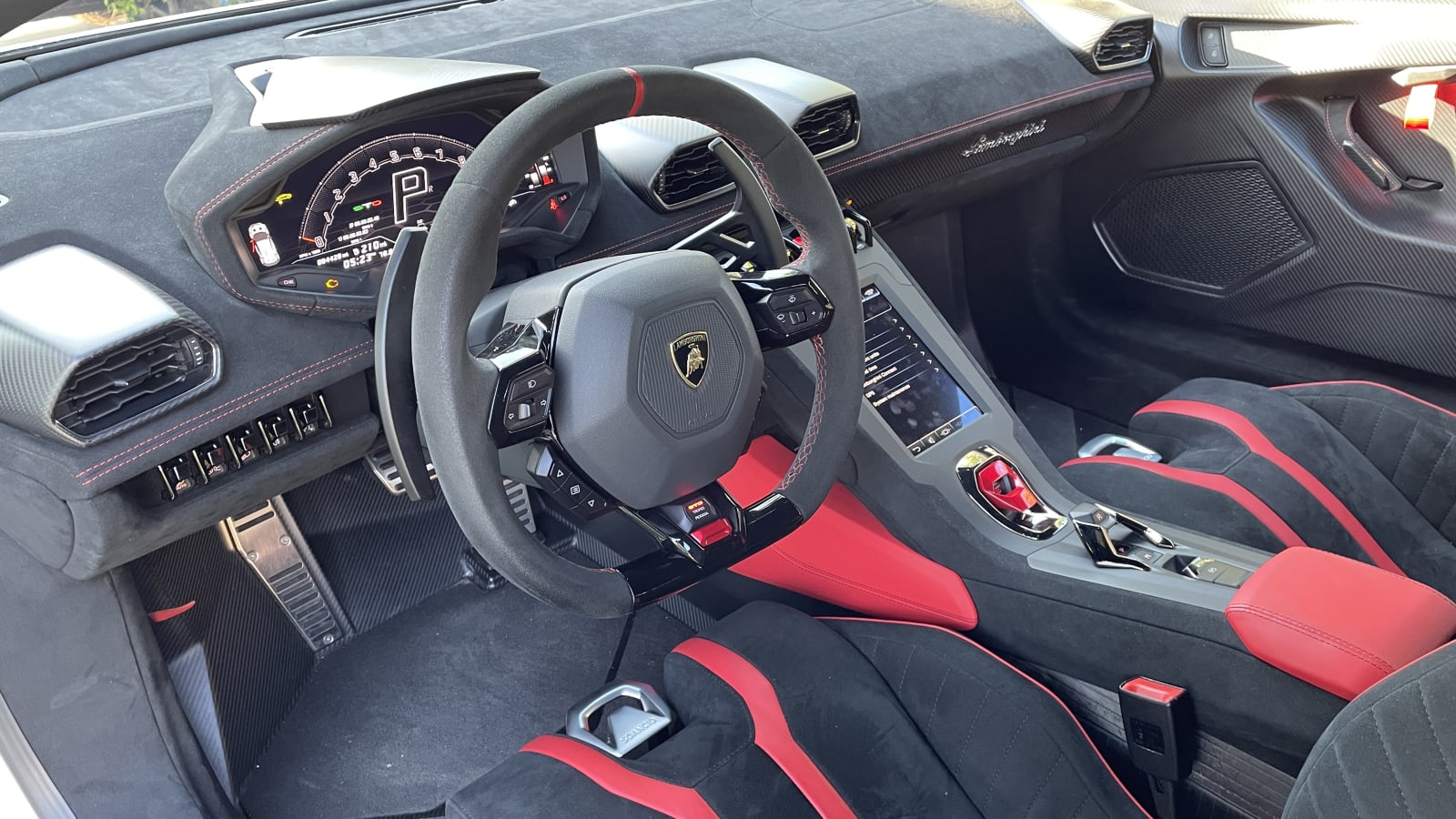 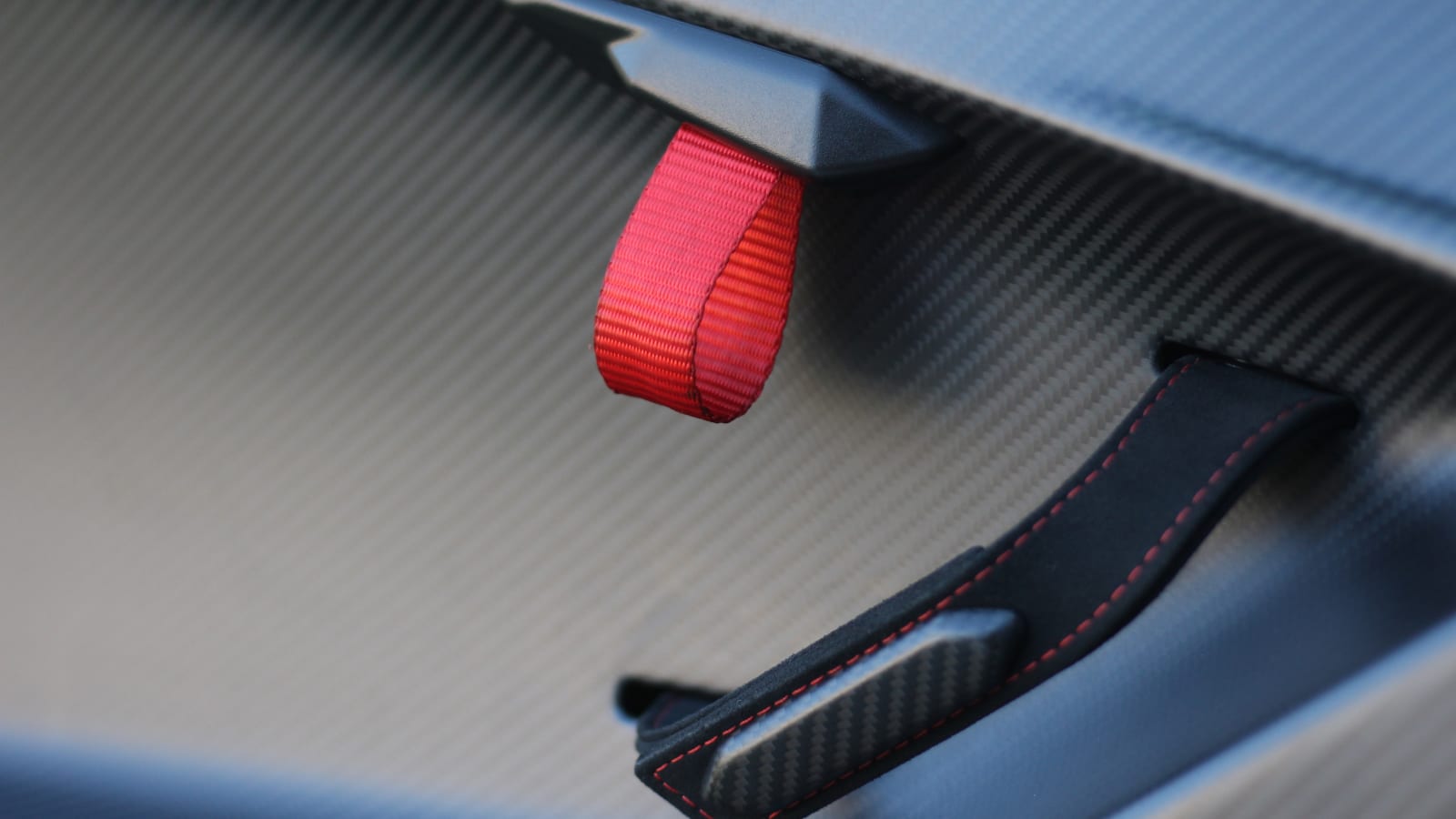 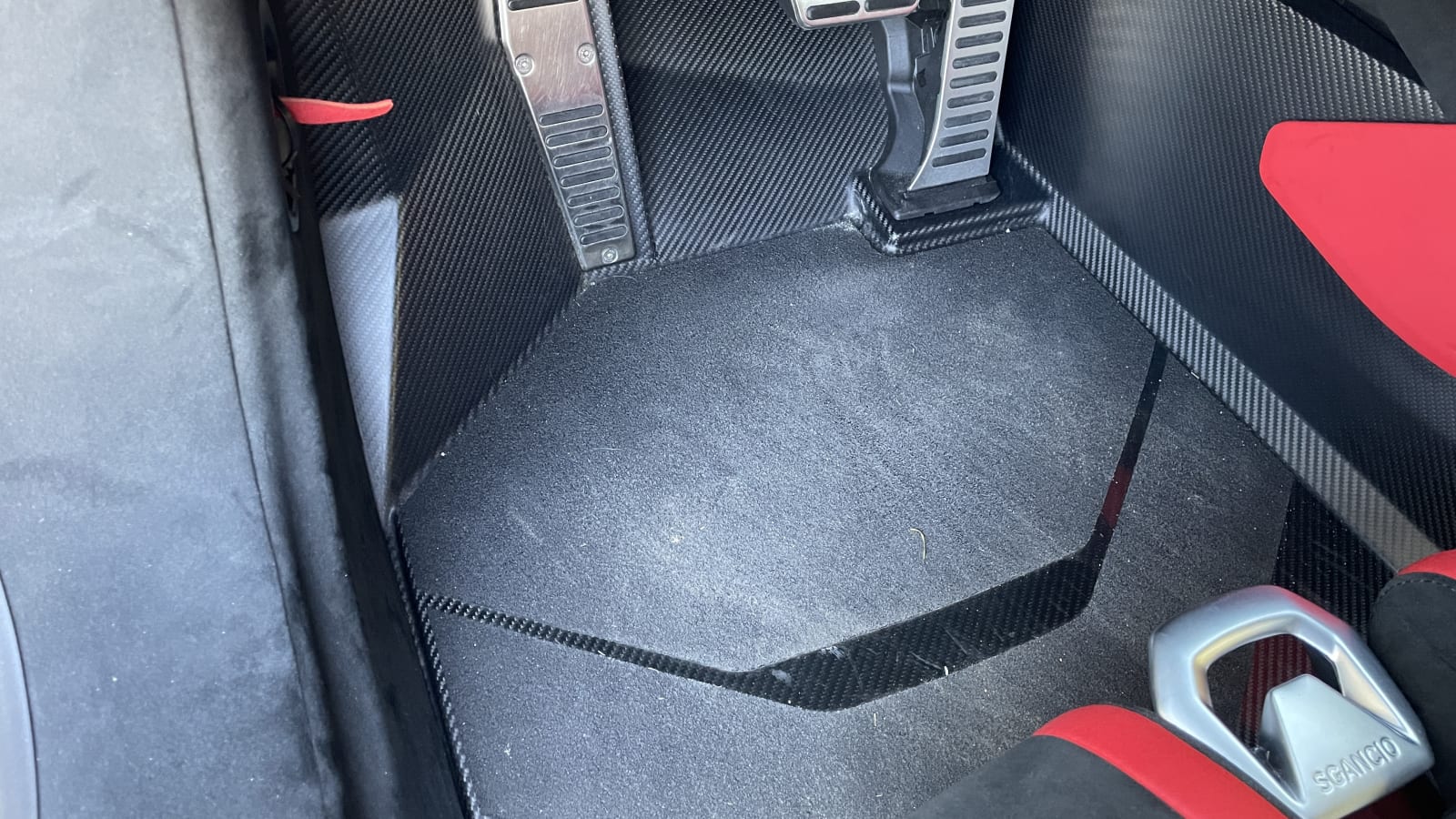 Flipping up the cover for the start/stop button is normal Lamborghini, but that doesn’t make it any less dramatic. The V10, which is shared with the regular Huracan EVO and Super Trofeo, barks to life with even more anger than anybody could hope for — it’s jump-scare worthy for anybody standing near the exhaust outlet. Despite the STO having a pretty normal infotainment system (apart from the frustratingly missing volume knob), Lamborghini puts the backup camera in the cluster, where it’s actually quite useful and ergonomic. Add a quick-operating nose lift for that carbon-fiber nose and easily used side mirrors, and navigating in or out of parking spots in this beast isn’t as arduous as it could be.

You’d assume that any car with the STO’s outlandish design would be outrageously uncomfortable to pop around town in, but the MagneRide dampers do a lot to help facilitate an acceptable ride. Where the real discomfort sets in is on longer highway stints, and it’s all due to noise. Lamborghini went to extreme lengths to sheer weight from the STO where it could, and the result is a super-noisy cacophony of typically undesired cabin sounds — massive tire roar, wind noise and a droning exhaust. But c’mon, that’s exactly what you were expecting, and maybe it’s exactly what you want, too? After all, if one spends $404,533 on a race car for the road, being constantly reminded that you’re driving a race car for the road sounds apt.

Tapping the steering wheel drive mode tab into “Trofeo” will unleash the car this STO is designed to be. Lamborghini says the “STO” mode is for “fun on curving roads,” but after trying both, it’s hard to imagine not wanting the absolute animal the Huracán becomes in Trofeo. Get it on the right road — for our purposes, these would be Angeles Crest and various Malibu canyon roads — and the death metal concert is full Morbid Angel. 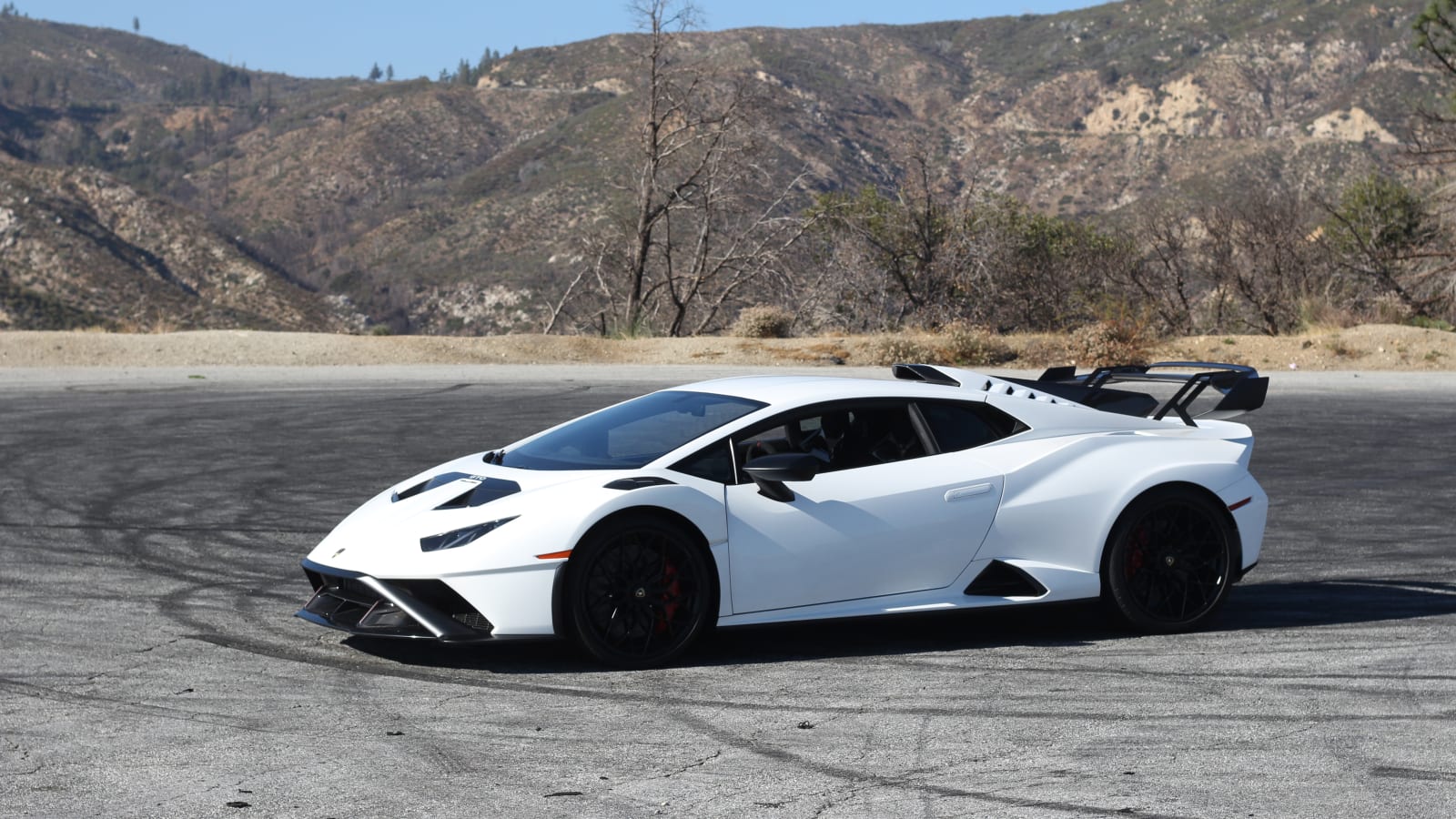 Throttle response is naturally instant with this naturally aspirated engine. Getting the revs up and keeping them up is a must to take advantage of the STO’s 631 horsepower and 417 pound-feet of torque. Note that torque is down versus the EVO’s 443 pound-feet on tap, but you wouldn’t know it thanks to the lightweighting at play here. The seven-speed dual-clutch transmission is controlled via the enormous paddles affixed to the steering column, and they tap with the clicky sense of occasion you’d expect from a supercar.

As soon as you ascend past the low-to-mid rpm range, the noise emanating from the exhaust turns from pleasingly gnarly to Napalm Death brutal. Letting the revs ride high all the way to redline, grabbing another gear and going for it all over again is pure, auditory heaven. Each and every downshift is complemented by the exhaust loudly back talking and barking sheer anger out to the world. You know, like death metal, and like our on-going metaphor, standing too near the exhaust could very well result in ear pain. From the driver’s seat, it’s simply perfection.

The back-and-forth nature of California’s canyon roads shows off just how focused and capable this STO is. Versus a regular Huracan EVO, it has a wider track, stiffer bushings all around, unique anti-roll bars and its own damper tuning. From the first corner, it’s clear this Lamborghini means serious business. It tucks in with alacrity and a feeling of lightness I wasn’t expecting. But in addition to this airy agility, the whole structure is simply glued to the tarmac in a way that feels unflinching and without compromise. The word that sums it up most succinctly is control. Driven within its limits on a public road, the STO imbues the driver with a sense of total mastery and control over the machinery. I, the driver, am no race car driver, but the Huracan is making corner carving in a 631-horsepower mid-engine supercar an eminently doable task. 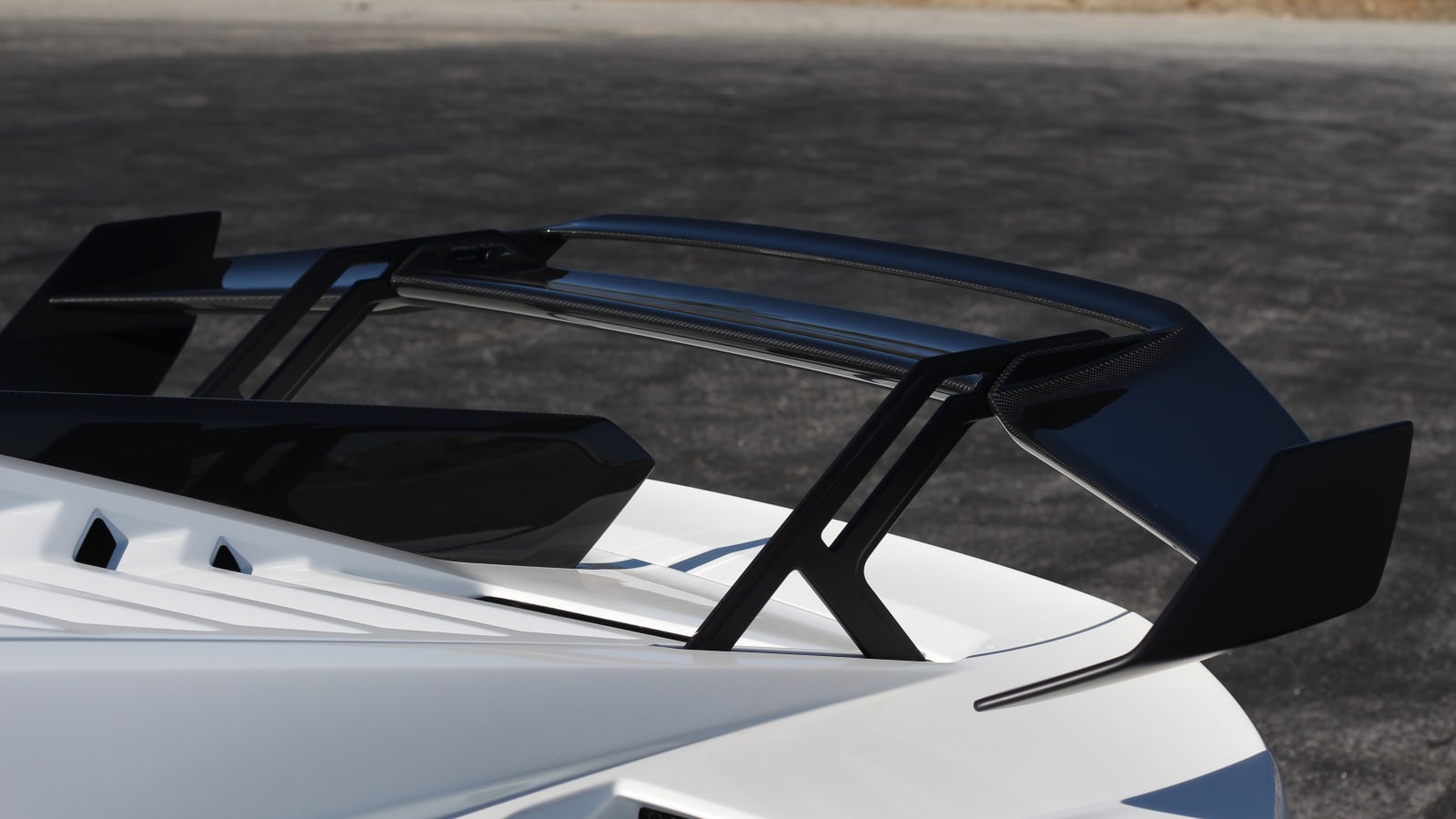 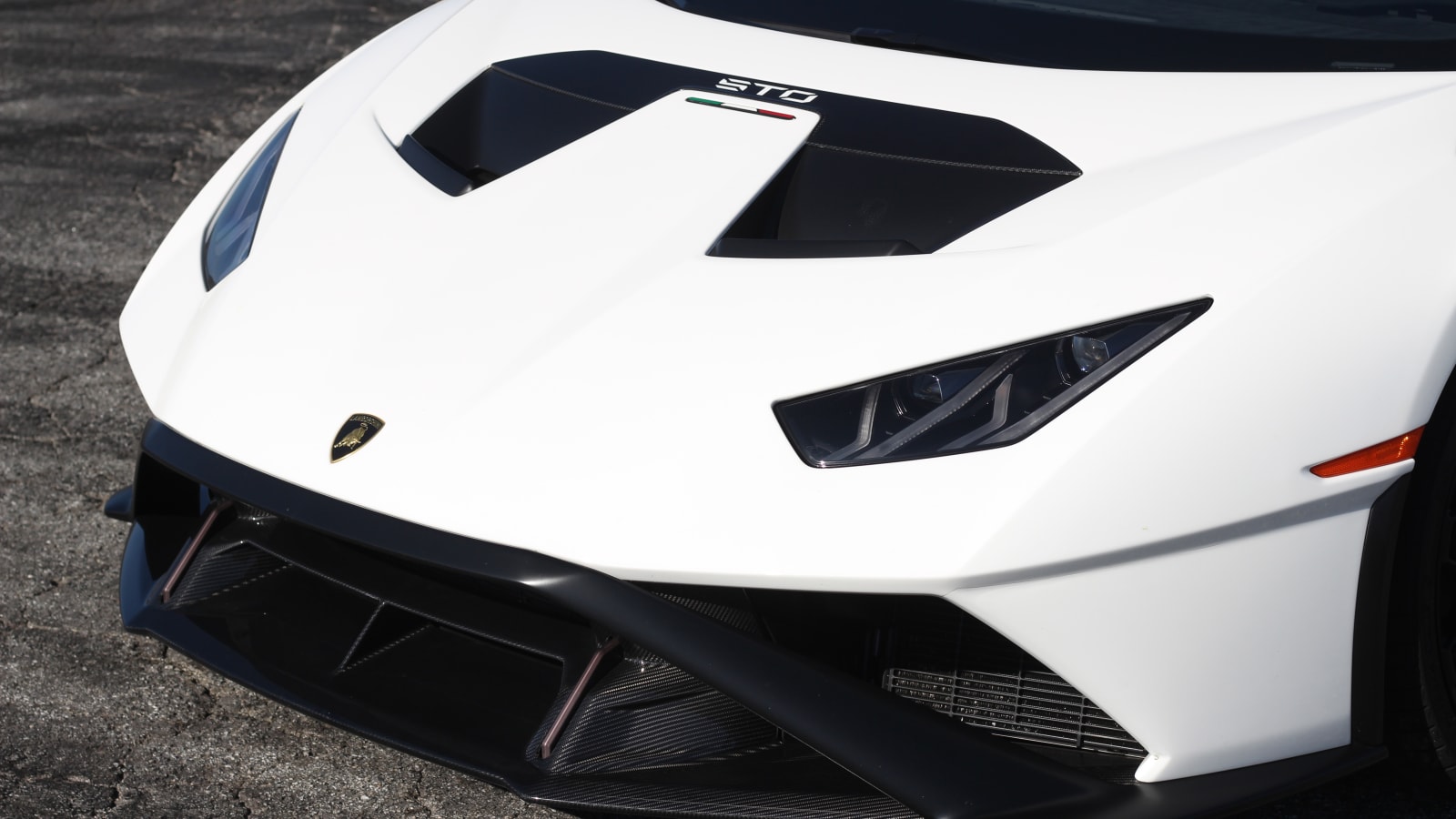 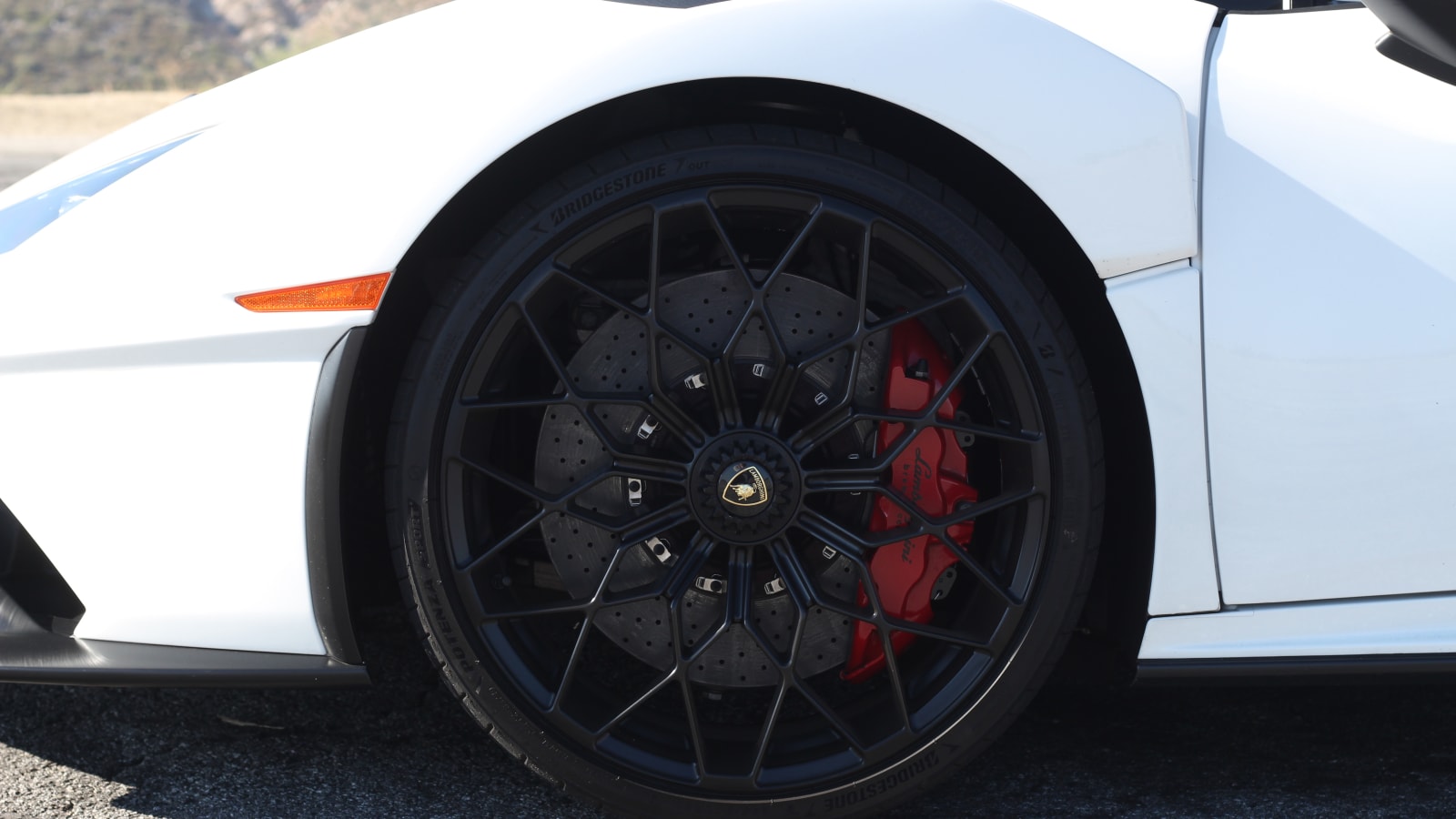 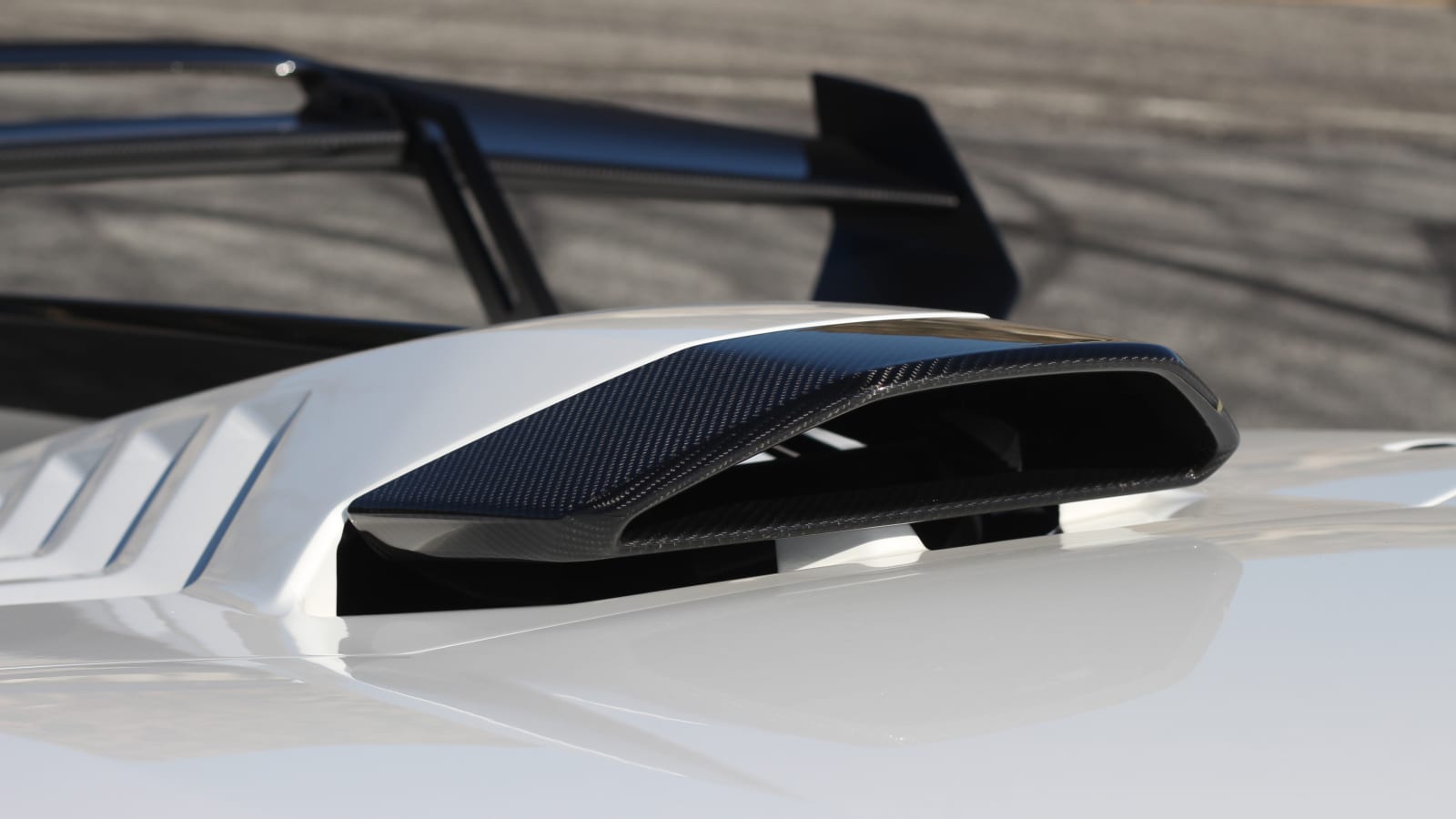 Perhaps the eye-popping aero package has something to do with how stuck-in (as the Brits would say it) this car drives. The aero-designed “cofango” represents the air duct-filled front hood, louvered fenders, low splitter and air-sucking front bumper — all of these typically separate and individual body panels are one big, dramatic piece on the STO. The rear fenders feature a NACA air intake. Its rear engine cover has an air scoop that improves engine cooling. A shark fin on that engine cover improves the efficiency of the rear wing when cornering. And oh yeah, that rear wing is manually adjustable to fit the sort of driving you’re going to do. It all results in a car that produces 53% more downforce than the already high-downforce Performante. Practically speaking, all this aero shoves the semi-slick Bridgestone Potenzas into the ground until they’re practically adhered to it.

The thing is, even with all that downforce, the STO is playful and lively with its rear-end when you want it to be. You may have the full force of Hades pushing you into the ground at speed, but 631 horsepower to the rear wheels is still 631 horsepower to the rear wheels. You can light ’em up, and if you find yourself on a skid pad or racetrack with space to burn, slip angle is just a step on the accelerator pedal away. 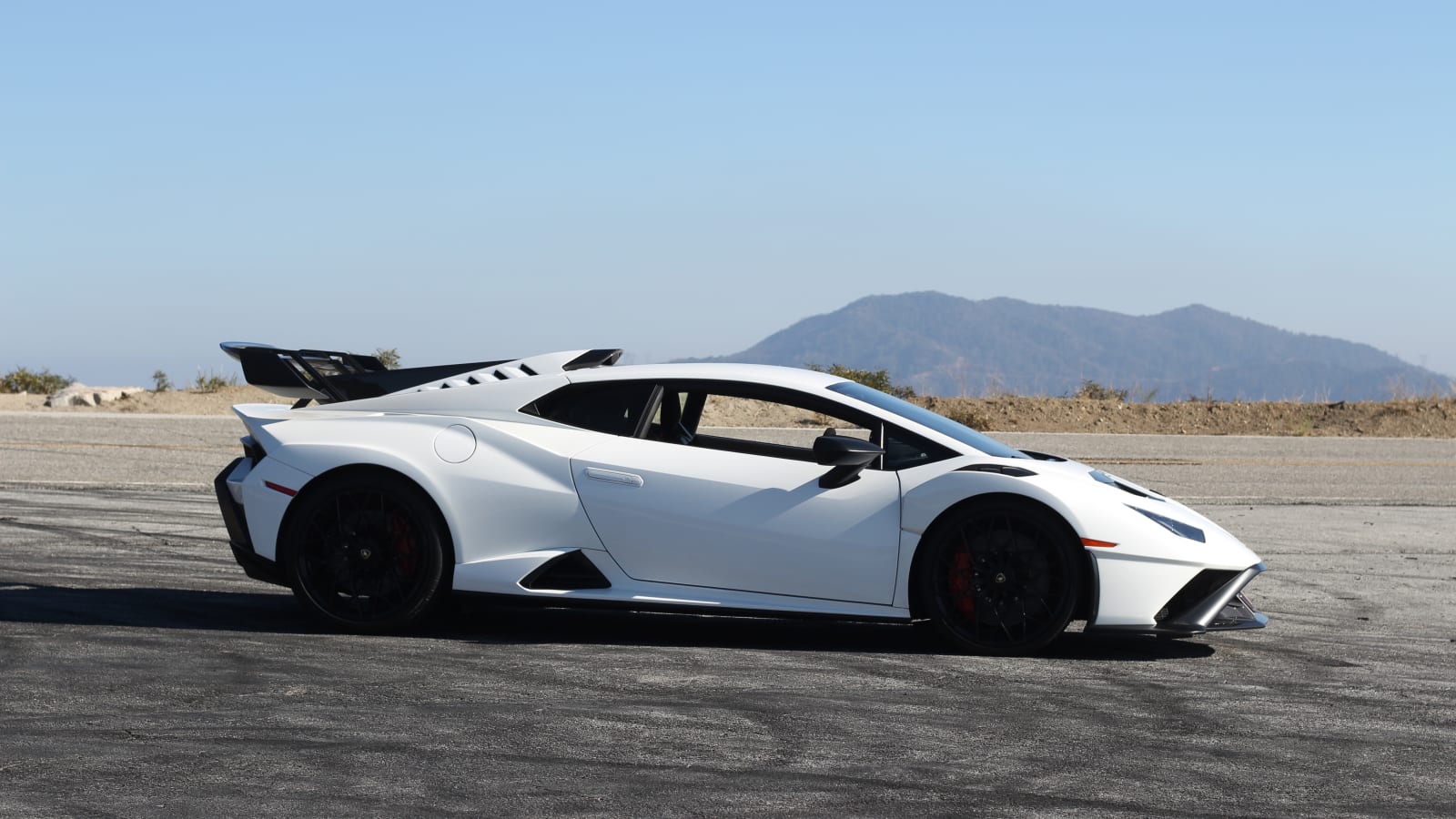 Just like a regular aero package isn’t good enough for the STO, a regular braking package isn’t either. This Lamborghini features a Brembo CCM-R braking system — the rotors provide four times higher thermal conductivity than traditional carbon ceramic brakes would. That results in a car that, on the street at least, simply never seems to run out of brakes. Lamborghini provides a brake temperature monitoring system in the cluster so that you can keep an eye on them during hard driving, and despite a thorough pounding, they never left the green temperature happy zone. The pedal itself is well-weighted and doesn’t need much effort to bring the car down from speed in a hurry. Once again, this STO’s lightweighting efforts come in handy.

On a scale of extreme road cars, the STO has the needle pinned to the dark end. There are others you can choose, like the 911 GT3 RS, Mercedes-AMG GT Black Series and LT series of cars from McLaren. And while most of those look like wind tunnel specials, the Huracan STO takes the cake for being the most extreme looking of them all. If that’s what you’re after, the STO will deliver. The drawbacks of buying a typical Lamborghini — weight, AWD, ultimate track day performance — don’t really exist in the STO, either. If you happen to have the $333,633 (an STO’s starting price) it takes to get one, have fun with the attention, and have even more fun driving it like it’s meant to be driven. Oh, and consider ear protection … or don’t.