Many cars have a clear adversary: Mustangs have clashed with Camaros for years. The Evo-versus-STI feud is still going strong. These pairings are more than just petty rivalries, though–they’re an exercise in measuring performance. After all, what’s a race without a well-matched foe nipping at your heels?

But what about a homebuilt roadster made from a wrecked Subaru? Is there a yardstick for the Factory Five 818?

We think there is, and it’s called the Porsche Boxster S. Like the 818, the Boxster has a mid-mounted engine with horizontally opposed cylinders. It’s a roadster. It has two seats. And most Boxsters are weekend toys, likely owned by the same kind of enthusiasts who would have the time and ability to build an 818.

So we set out to compare something built in our garage to a finely engineered German performance car. Did our home-built creation measure up, or did it have room for improvement?

The venue for this test would be The FIRM, a newly renovated motorsports facility just outside of Gainesville, Florida. And the driver wouldn’t be one of us–we wanted a true test pilot for this comparison. We commandeered Dan Shields, five-time SCCA Solo National champion, nationally certified driving instructor, and ASE-certified master technician. He’s also a nice guy.

If anyone could drive our 818 and keep it in one piece, it would be Dan. As a bonus, he also brought us a Porsche–his wife’s pristine 2002 Boxster S that’s a regular in Porsche Club of America autocross competition. Aside from a set of Bridgestone Potenza RE-11 tires, it’s still stock. Our 818 rolls on Yokohama Advan Neova AD08 R tires, making this a fair fight right down to the rubber.

On paper, there’s only one standout difference between the 818 and the Boxster: weight. The Boxster weighs 1000 pounds more than our homebuilt sports car.

Time for a friendly face-off. Despite similar layouts, the scales don’t lie: The 818 undercuts the Porsche Boxster by 1000 pounds.

Otherwise, there’s little difference between the two cars. Once you factor in driveline loss, they both make about the same amount of power. Both cars have a similar footprint, too.

The question is, will the Boxster’s inherent “Porscheness” make up for its heftiness on track? Or will the 818’s light weight and better suspension design shoot it into the lead?

Before we could answer the question, we needed test criteria. After an hour or so of getting acquainted with the 818, Dan mapped out a course. His final design combined a long straight with a series of S-bends, a slalom, a banked sweeper, high-speed transitions, and a few 90-degree, city-style corners. In short, it was the perfect test of a sports car’s abilities: handling, braking, acceleration, transitions and even driver confidence. 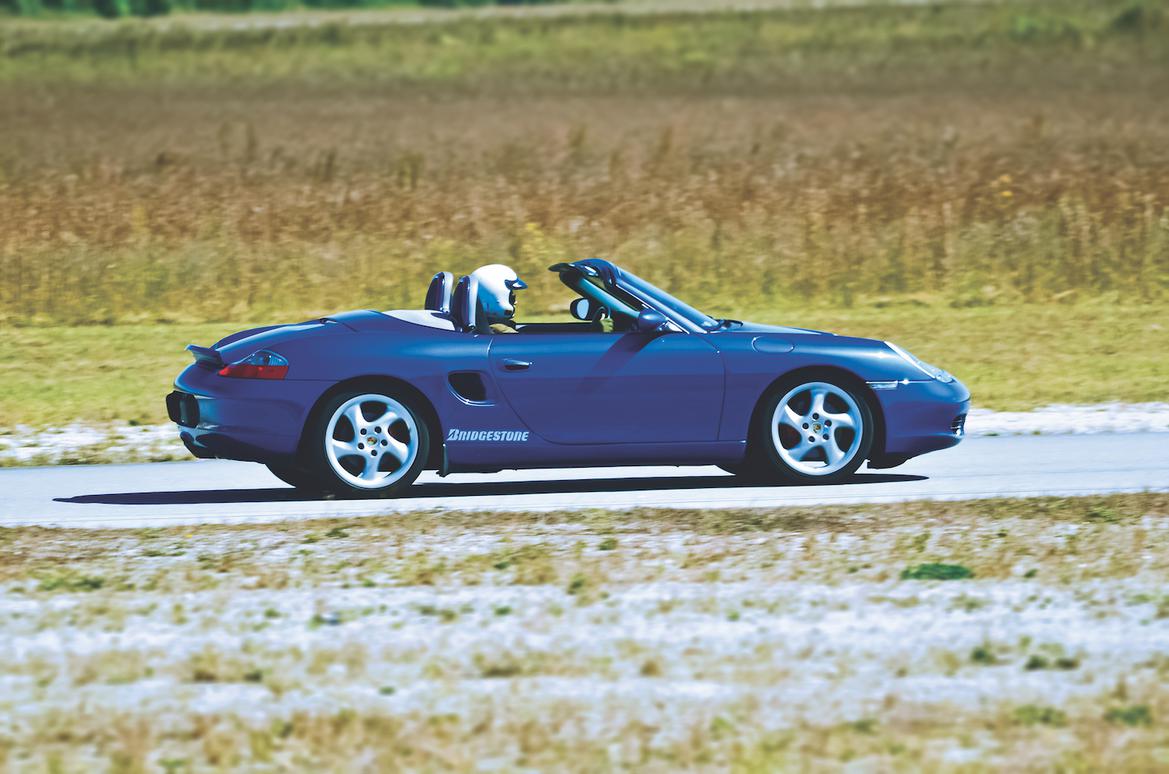 Once he was comfortable driving each car, Dan completed four flying laps of his test course. The verdict? The 818 is faster than the Boxster.

A thousand pounds is hard to hide on a road course, even when the driver has spent years learning how to work with the extra weight. Dan has campaigned a huge variety of cars–from MG Midget to Ford Mustang–at the national level in both road racing and autocrossing. 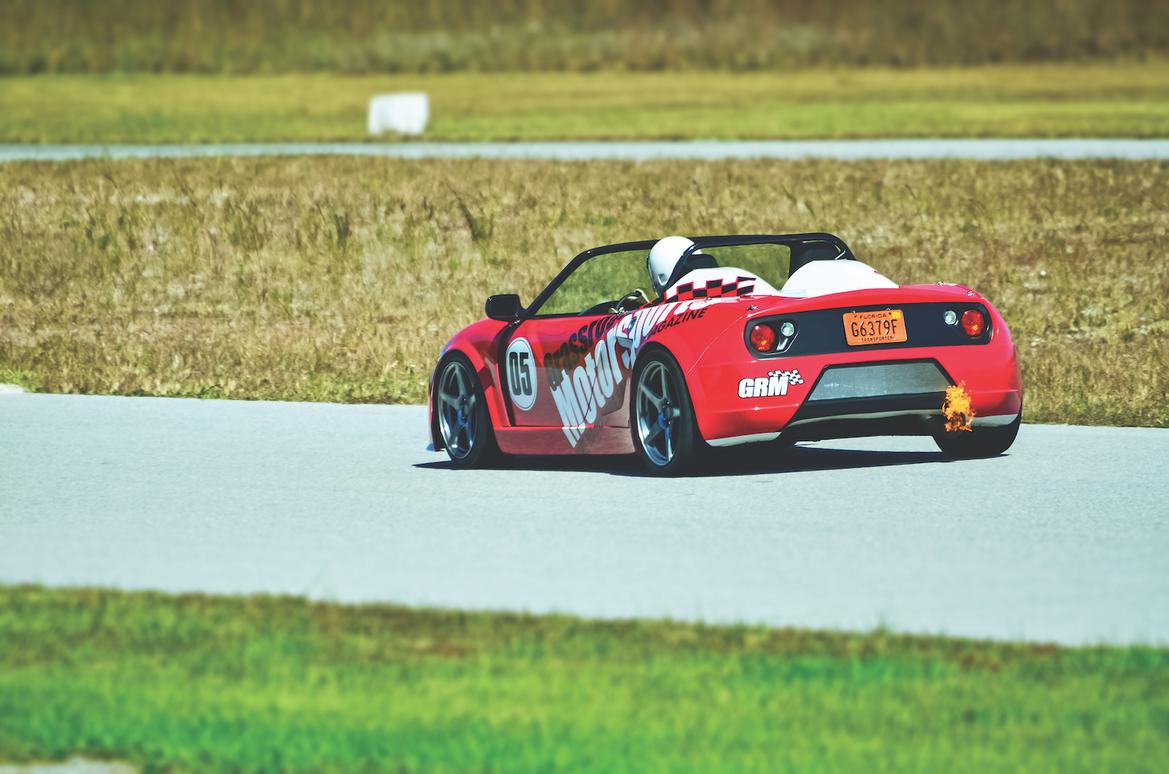 Dan’s laps were über-consistent in the Porsche, but varied a fair bit in the 818. We’ll chalk that up to his unfamiliarity with the Factory Five, though we can’t help but wonder if a Porsche is easier to drive than our turbocharged monster.

Track testing, though, is only one part of this comparison. That extra 1000 pounds had to go somewhere–Porsche spent it on creature comforts, metal bodywork and safety features.

Comparing the Boxster and the 818 as street cars isn’t even a contest–one has carpet with sound deadening, one has a metal floor with drain holes. One has a/c, one doesn’t have a roof. One has power windows, one has a hood that constantly waves at the driver like a drunk guy on a parade float.

The Porsche also has not one trunk, but two. Try to carry anything bigger than an insurance card in the 818, and you’ll be disappointed. If you push through that disappointment and try to put anything in the rear “trunk,” then your cargo will arrive nice and toasty. The Porsche also has crumple zones, air bags, stability control and decades of crash testing experience behind its design.

Good lap times and street manners don’t necessarily add up to a truly great car. It takes something more, something intangible. The 818 and the Boxster both tick the “je ne sais quoi” box, but in very different ways.

The Porsche does have the allure of easy maintenance, provided your checkbook is thick enough. Any dealer will gladly work on it, and you’ll never get your hands dirty if you don’t want to.

The 818, though, is the opposite. No dealer in their right mind would touch it, but its parts are simple and easy to find. Plus, the simple act of buying one means you’re required to learn how to work on it. It’s a safe assumption that anyone with a running 818 has gained the skills to keep it that way. Both cars are well supported by local and national clubs, too.

So what’s the verdict? The 818 is clearly a faster track car, while the Porsche is clearly a better street car.

At this point, we’re comfortable calling our Factory Five 818 finished. We started with nothing more than a pile of parts, a wrecked Subaru and an instruction manual, and we finished with a car that can attract drooling bystanders, beat a Porsche on track, and take you to work every day. This 10th installment will be the last official story in this project car’s series, but that doesn’t mean it will disappear. We’ll still be writing about it online, so don’t be surprised if you see the occasional update in the pages of Grassroots Motorsports.

Now, what to do with it? As we proved by building a supercar in our garage, almost anything is possible.