Mike and his lovely wife Laura W. Came by our campsite this morning, having driven all the way from Truth or Consequences!  A bit over 120 miles! 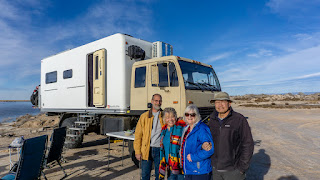 Mike, Laura, Martha and I

They showed up as I was taking off the Ural Patrol’s seat in order to access what I thought was a failed battery.

Mike W. took a look and said to clean and check the battery connectors as they were quite dirty.

He explained that corroded/dirty connections would prevent the Patrol’s alternator from charging up the battery; eventually leading to a dead battery!

I had been wrong in trusting my battery charger at home which has reported a full charge before the trip!

All this I thought it was a failing starter, now not so sure.

He removed the battery, cleaning connectors to bare metal, and we then put the battery in a charger while we visited.

A couple of hours later, the battery was charged up again and I was able to start the engine on the Patrol with the battery unmounted!

Mike and Laura finished visiting and left at this point and Chris Z. helped me put the battery back in and secured.  I tried one more engine start and Scarlett cranked right up! 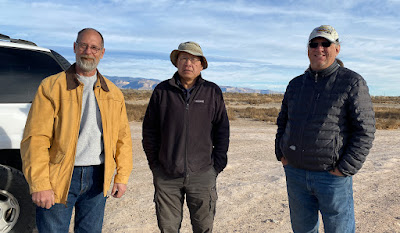 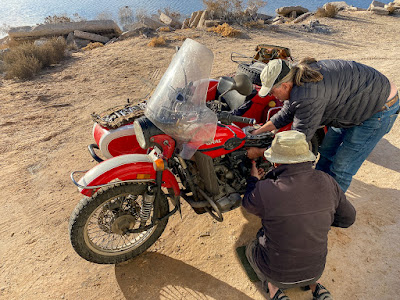 We visited with Mike and Laura till about mid-afternoon, everyone enjoying the sharing of stories and adventures.

I learned that my battery maintenance procedures were “lacking”, so I must do better.

In the evening, it was time for a camp fire after a sumptuous dinner of prime rib by Martha.

It was an early night for all of us, and the wind that came up as we sat by the fire encourage us to go inside.

Mercedes, not Ferrari, to be ‘first rival’ – Verstappen

How to watch the launch of the 2023 Williams car

How to watch the launch of the 2023 Williams car