Every summer for the past 6 to 7 years, I’ve tuned into endurance racing events on TV or online like the 24 hours of Le Mans, Nurburgring, and Spa, and have always been fascinated by the competitive nature of the World Endurance Championship series, and also the preparation that goes on behind the scenes to make these events possible. Growing up in the US, NASCAR was my only outlet as a young car enthusiast, but as I got older I found a better style of racing, thanks to playing Gran Turismo, with more technical tracks and circuit racing across the globe and I was instantly drawn in. The camera work, the sounds that were being picked up on the mics, and even getting a small glimpse of the paddock and pit row from the on track reporters created a mental picture that I had to experience in person.

In January of 2020 I made it a goal to attend a race at Lime Rock, but sadly those plans were altered. With nothing to do on weekends thanks to the lack of car events, I started watching GT4, TCR, and Grand Sport more intently. I got a better understanding of the teams, drivers, and started following the standings far more than I had before. When 2021 began and life was returning to normal, I knew that after doing nothing for an entire year, that this was the time to make the trip and attend my first ever race.

Leading up to Saturday, weather wasn’t looking too promising but as we got within 24 hours of the start of the Lime Rock 120 it appeared as though the thunderstorms would hold off long enough to at least watch the first race in it’s entirety. The ultimate goal was to just have 30 minutes to hear the Porsche 911 RSR scream around the track, and we were rewarded with almost an hour and 30 minutes of the Northeast Grand Prix before the red flag was waved. While the race was cut short, I got hooked immediately and I’m sure everyone around me has gotten tired of hearing the endless raving about this weekend.

What made this event so special?

The sights, the sounds, and even the smells were nothing like I’ve ever experienced before. If you’ve been to air shows, you probably know the feeling, but to be within mere feet of these cars as they raced around the track made Saturday incredible. Even better, IMSA just might be one of the most fan friendly organizations in all of sports, as before the race you can walk down pit row without having to pay an extra fee, you can get up close to the cars, and maybe even meet your favorite drivers. Everyone is friendly and polite, and to an extent it feels like one big Cars & Coffee, with the exception that you get to watch the cars in motion and not have to deal with police giving out tickets for loud exhausts or have neighbors complaining.

From a spectator’s perceptive, Lime Rock offers some great locations to get awesome shots or videos or simply just phenomenal views. Turns 1, 2, and 3 seems to be the popular spot, but if you make your way to No-Name Straight the sound that bounces off the hills as the the GTLM and GTD cars pass by, then downshift as they approach Turn 5 and then accelerate out of the corner is a spine tingling sensation. It was 90 degrees and humid, but I still managed to get chills each lap. The area I couldn’t get enough of what Turns 6 and 7, but also the straight away that dips down under Bailey Bridge as the they enter the final corner. Here you can experience the race on both side of the track, providing great views but also once again perfect locations for photos and videos.

How about the racing? 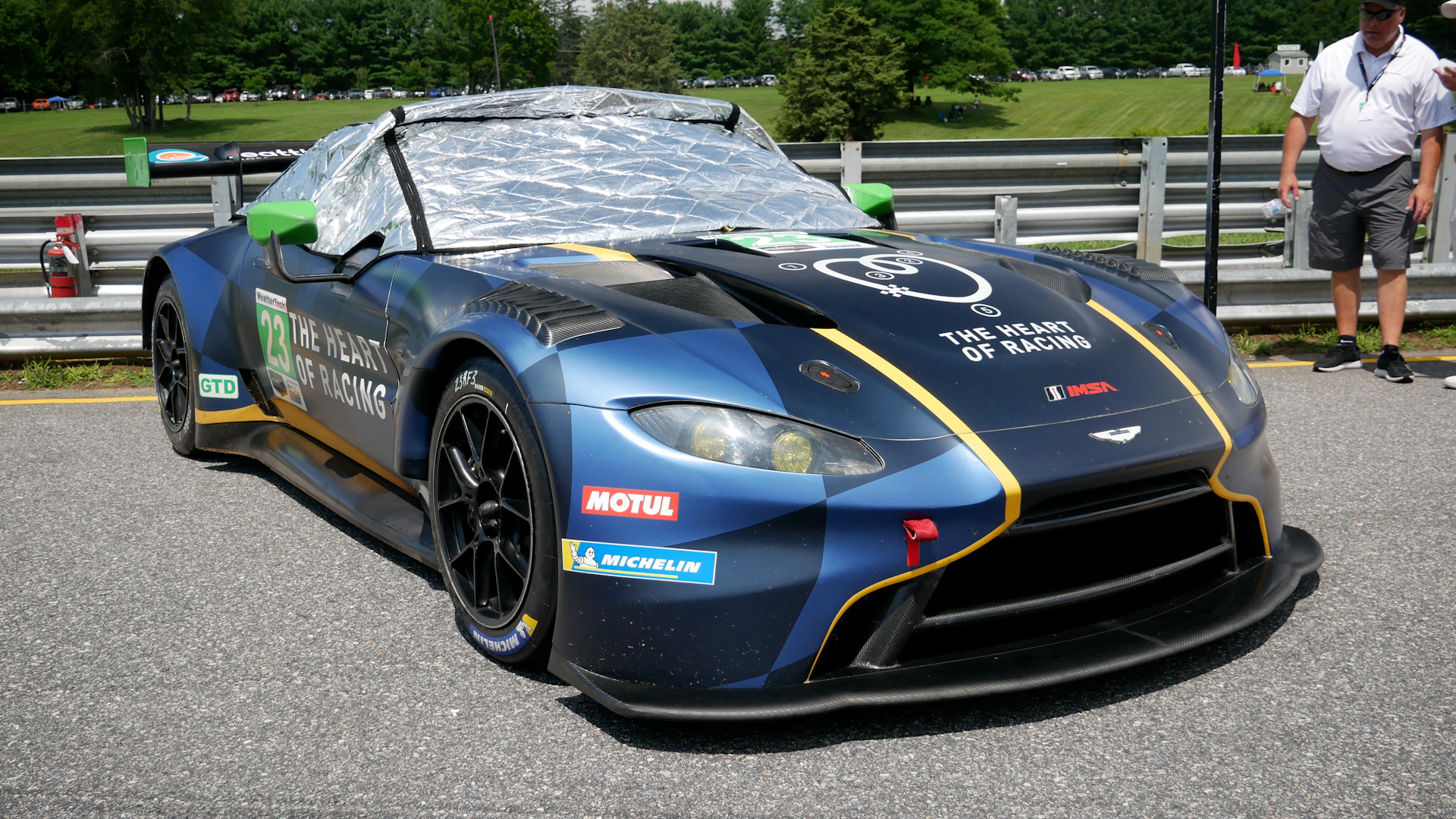 Both the Lime Rock 120 and Northeast Grand Prix exceeded expectations, but in different ways. The first race had both the Grand Sport and TCR classes, offering a good mix, but also thanks to a field of 30+ cars it was a bit more competitive than GTLM and GTD. Regardless of class, there’s a variety of manufacturers and different engines which is why even on a basic level of sound is better than the V8 filled field of NASCAR. In the GS class you have a solid balance between the BMW M4 and Toyota Supra’s inline 6, the Porsche Cayman’s Flat 6, the Chevy Camaro, McLaren 570S, Aston Martin Vantage, and Mercedes Benz GT being powered by V8’s, and the Audi R8’s V10. While the TCR class is all powered by 4 cylinders, together these two classes create opportunities of seeing passes in corners and closer racing, but the amount of entries per race played a factor as well. The Lime Rock 120 also has a few more cautions which bunched up the field on numerous occasions and with that brought some great racing.

In regards to the final laps, I’d recommend retuning to the first corners or close enough where you can hear the announcers if you aren’t listening to IMSA radio to get an idea of what’s happening elsewhere on the track. While I was standing near Bailey Bridge and overlooking turn 7, I saw the end but wasn’t fully aware that in TCR the gap between 1st and 2nd as they crossed the finish line was 0.134.

Then for the main event, the Northeast Grand Prix, “speechless” would be the word to describe watching all 16 cars pass by. For such a small field, the sound was amplified compared to the prior race which was still pretty loud. The two Corvette C8.R’s dominated the entire race, both carving out a sizable lead over their only competitor, the Porsche 911 RSR and in the process lapping the GTD cars on numerous occasions. More important than the cars themselves were the drivers participating, such as Jordan Taylor, Nick Tandy, Mathieu Jaminet, and Laurens Vanthoor all of which will be competing in either the 24 hours at Spa or Le Mans so you’re watching World Class drivers execute moves on the track and race which is pretty awesome.

It was this race where I found a place to just sit down and enjoy as the skies began to darken, and rather than spending all my time filming I wanted to soak in every second of this incredible experience. I couldn’t take my eyes off the Porsche 911 RSR as the roar of the exhaust would just shake you to your core, and there were a few times where I thought I’d lose my hearing (bring ear plugs if you attend these races). But just like with the Grand Sport Class, there was a good variety of engines and exhaust notes producing a nice automotive melody as they passed by.

Sadly after almost an hour an a half in, lighting struck and that was the end of the festivities. I got to experience enough where the 3 hour drive was totally worth it, while not spending enough time appreciating this race where I feel like the next adventure is traveling to Watkins Glen next year before returning to Lime Rock.

I’m addicted having witnessed all of this in person, and I highly recommend going if you or a family member has been talking abut attending for a while. It’s an experience like no other, and once you go to one race you’ll find yourself wanting more.

Thank you IMSA, Lime Rock, and all the teams and drivers for an amazing Saturday! Looking forward to doing this again next year See you in 2022!