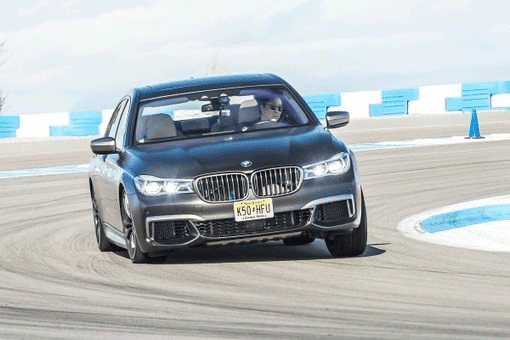 The BMW M760i is a front-engine, all-wheel-drive full-size luxury sedan. It is the newest release by BMW. Sad news for the market that was waiting for an M7, BMW never created any M7 and does not plan to create one in the future too. The M760i is only available as a long wheelbase sedan (not even a short wheelbase).

The first 7-series that were ever produced dated back to 1977. At that time, it was the successor to the BMW E3 “New Six” sedan. Since then, BMW always kept on upgrading the car and making it more luxurious.

The car was officially revealed last year. BMW Performance Center West hosted the International Media Launch of the first-ever BMW M760i xDrive. In countries where only the short wheelbase 7-series are available, the car is known as the M760Li there. 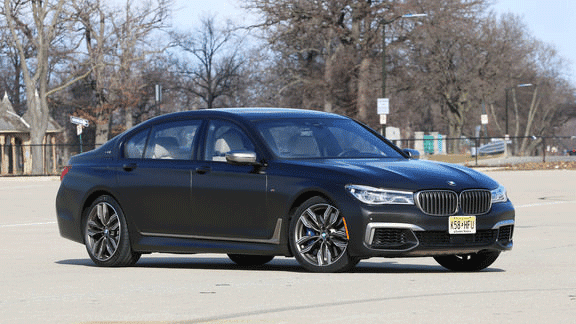 The BMW M760i is built on the same structure and chassis as the other sixth-generation 7-series. The car looks very appealing to the eyes and at the same time, it does not have the fierce kind of look. This car is literally the gentleman’s car.

The car has active grille shutters, that is, the massive front grilles open up and close automatically depending on how you are driving the car. This feature is slowly becoming part of many vehicles nowadays. Not only does this allow you to control the airflow, reducing aerodynamic drag but also this brilliant technology helps to improve fuel efficiency. 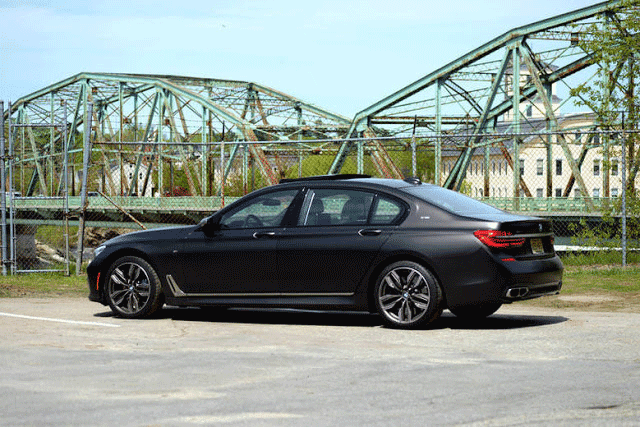 Aluminium is one of the main composites of the BMW M760i. The hood, trunk, door panels, as well as other parts of the car, are made out of aluminium. The manufacturers have used a bit of carbon-fibre to reduce the weight of the heavy sedan. As a result, the M760i weighs 190 pounds less than a normal 7-series.

A completely luxurious car with rear reclining seats will usually have a silent exhaust, so as not to disturb the boss that is relaxing on the back seat while he is being driven around town. But not this time, the new BMW M760i has a new “mostly straight piping ending” exhaust system. Once, you put the car in sports mode, expect to hear some pretty decent noises. 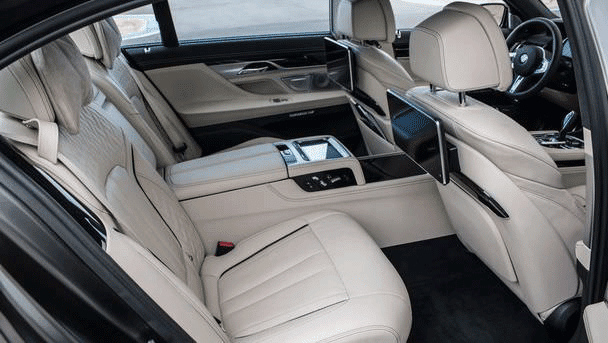 The car sits on 20-inch wheels that are covered in Michelin Pilot Super Sport tires for ultimate grip around corners. For such a big sedan like that, these wheels might seem a bit small, but hear me out, these wheels are used here just so that comfort level is not decreased. You can have fun on the racetrack as well as relax comfortably in the back seats.

Just by the looks of the BMW M760i, we already know it is a very heavy sedan. But that does not stop it from going to the racetrack. Yes, you can take that car to the track. The car uses a responsive variable-ratio rack-and-pinion steering system up and front and a standard rear-steering system (optional on other 7-series).

Once you step into the car, you dive into a world of luxury, comfort and entertainment. The BMW M760i, being the top model, definitely makes you feel like you are someone that has achieved something. Everything inside is crafted so beautifully. There are leather, woods and even carbon-fibre if you want on the inside.

One feature of the car that cannot be left unnoticed is the backup camera. The backup, as well as the 360-degree camera, are completely unique and the image quality is very high. Personally, many other car enthusiasts will agree with me, BMW has got the best camera in the whole industry. 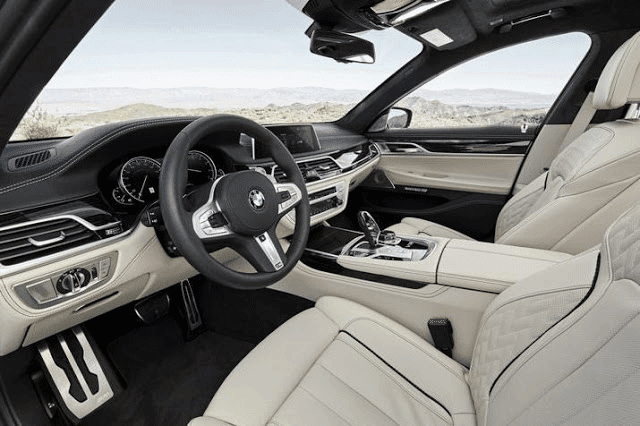 Another great feature is the automatic parking mode. That is, the car can move in and out of car parks so that you do not have to squeeze yourself inside. However, the car won’t make turns by itself, this feature works only in a straight line. The user controls the car by its remote or the BMW app.

Being a long wheelbase model only, the BMW M760i has self-reclining back seats to give you ultimate comfort. The usual seat cooler or heater and all the other bits are also present. Literally, it is a complete package car. A massive engine, luxury and comfortable rear seats and your own fridge where you can store drinks for long trips. You can also get the optional rear-entertainment system. What more you get when you spend that kind of money. Well, you get ambient lighting that can be customized according to your choice and you also get optional aromatherapy scents, so that you always smell good air inside your luxury BMW.

Here and there, you can notice some rather cheap plastics. After all, this is not a Rolls-Royce but a BMW, so it is acceptable. But when you are spending a huge amount of money, I don’t think you would like to touch cheap plastics. Also, a big complain that BMW always gets is that most of its car interior looks the same, be it an X5 or a 7-series.

Let’s talk about what is under the massive hood. The engineers needed to make sure to develop something that will not only set the road on fire but also that will preserve the comfort and smoothness of the car.

To be able to deliver eye-catching performance, the BMW M760i uses a 6.6L BMW M Performance Twin-Turbo V12 engine. This is a completely new engine, other 7-series cars do not have this. This setup makes 601 hp and 590 lb-ft of torque. The car uses an 8-Speed Steptronic Sport Automatic transmission with steering-wheel-mounted paddle shifters.

The BMW M760i will sprint from 0 to 60 mph in just 3.4s and will hit 100 mph in 7.9s. The car will complete a standing quarter mile in a blistering 11.8s. These numbers look like there are for supercars but you are wrong. The 5-tonne BMW M760i is very capable on road and here is the proof. 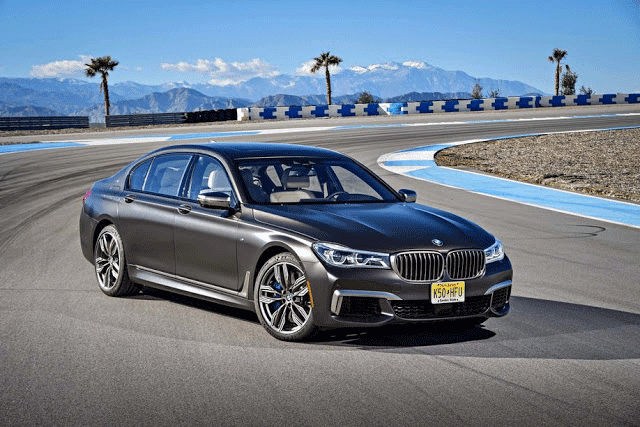 If you want to sit in the back seats and enjoy a good champagne while your driver does some laps around the track but hates expensive car, then the BMW M760i is the perfect car for you. The car has a combined fuel economy of 16 mpg. 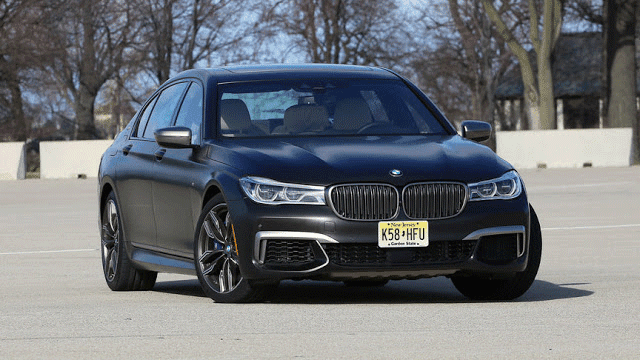 Most of the people buying this car will most probably be sitting in the back seats. We don’t think that these very busy people will even find time to personally drive the car on a track or somewhere alike. So, we cannot really tell if the BMW M760i would be a huge success or not. Also, when you can get a brand new 7-series for less than starting price of the M760i. However, if you want one, you can order yours at any BMW showroom near you or you can reserve one online.

If you like the article on the 2018 BMW M760i, please share it on any social platform of your choice. It really helps us to keep creating awesome contents for you. Also, if you have questions, tips, recommendation or anything else, feel free to write it down in the comments section and we will try our best to reply to all of them. Don’t forget to subscribe to our newsletter for hot supercar related news and also to be the first one to know when we upload a new blog.