Back in late April when Canadian pricing for the new BMW 7 Series was announced, we reported about how the 760i and i7 are identically priced. Indeed, both the V8 gasoline model and the purely electric version kick off from $147,000 (Canadian dollars). However, the two cars you are about to see in this video have numerous options that drive up the price by tens of thousands of dollars. As a matter of fact, the EV hits the $200,000 mark.

Otto’s BMW, the very first BMW dealer in Canada, currently has the two luxobarges on display. A new video shot on the showroom floor initially puts the spotlight on the 760i with its Individual Frozen Gray paint and 21-inch wheels. The interior has been configured with automatic doors, crystal controls, and Individual Merino leather in Amarone along with the carbon fiber trim. The real highlight is in the back where the 31.3-inch Theatre Screen serves as the rear-seat entertainment system. Price? A hefty $185,300. 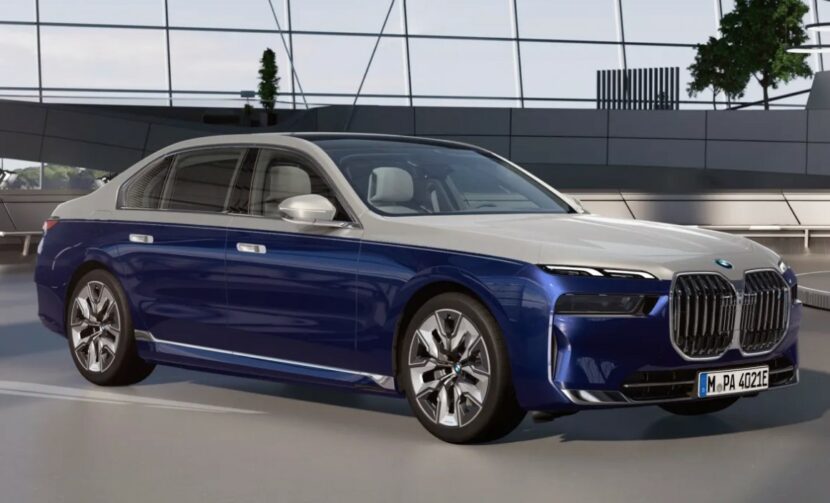 Those willing to reach deeper into their pockets can opt for the lavishly equipped i7 xDrive60. It gets a two-tone paint job à la Rolls-Royce by combining the Individual Tanzanite Blue metallic with Oxide Grey used for the upper half. It rides on the 21-inch wheels and comes with a Merino white leather upholstery combined with fine wood ash grain gray metallic open-pore trim. This one too has the big screen in the rear. All in, you’re looking at an electric 7er that costs $201,800 in Canada.

Since the gasoline and electric models ride on the same CLAR platform, the 760i and i7 look essentially the same inside and out. It should be mentioned the G70 generation comes in only one size and it’s bigger than the previous long-wheelbase G12 model. In this case, both vehicles lack the M Sport Package as they’re geared toward the luxury side.

For a more aggressive look, BMW is selling an M Performance model as the M760e. It’s a plug-in hybrid with an inline-six to indirectly replace the old V12-powered M760i.

What’s an 800 HP BMW M8 Convertible Like on the Autobahn?