A few weeks ago, MINI showed off its Aceman concept, a futuristic vision for urban mobility. It featured a funky interior, with a massive dashboard screen and playful animations, and was clearly designed for the next-generation of drivers. Although, its exterior was far tamer than its wild interior. So it makes me wonder what the final product is going to look like. In some new spy photos, though, the Aceman doesn’t really look much different than your average five-door MINI. (We don’t own the photos but you can see them here)

Despite this test mule’s pretty average looking exterior, you can tell it’s the production version of the Aceman due to its odd headlight shape. Unless MINI is trolling us with camouflage, it looks like the headlights are shaped similarly to the Aceman concept. The roofline is also low and tapered toward the rear of the car, with a high shoulder line and short windows, just like the concept car.

Admittedly, there seem to be larger front air intakes on the test mule, which the Aceman concept didn’t have, but they could be functional intakes for battery cooling. The MINI Aceman will be a purely battery-electric vehicle, with no internal combustion engine options. It will be built on the new Spotlight platform, developed in joint by BMW and Great Wall, in China. That new platform is an all-electric scalable architecture that will underpin future MINI models. 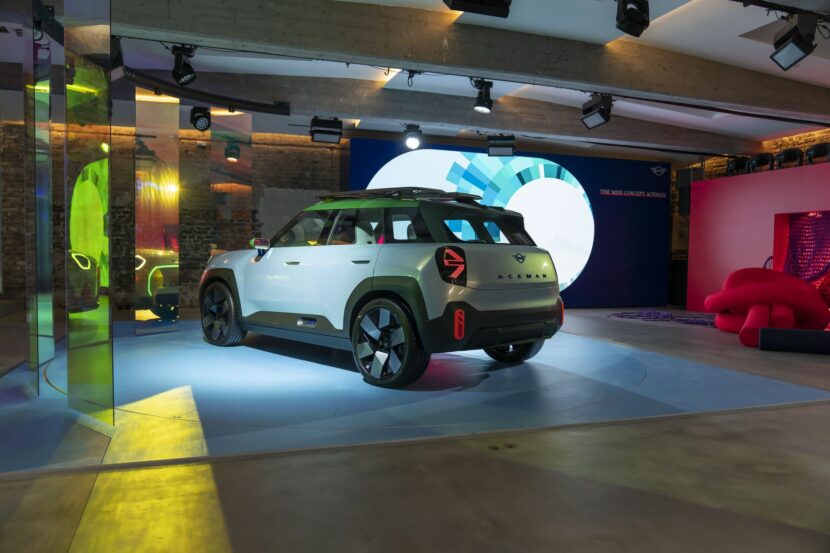 When the MINI Aceman debuts, it will essentially be a Clubman replacement and likely come with the same powertrain options as the MINI Hatch. So expect a 181 horsepower front-wheel drive single-motor setup for the base Cooper model and a hotter Cooper S model with 221 horsepower.

We’re certainly interested in this new MINI Aceman, as it represents a fun new shift in MINI’s product lineup. Switching to entirely electric models will make the brand unique in the lineup and it will be better off for it. Plus, the entire MINI ethos works better with electric powertrains. I’ve driven almost every kind of MINI you can imagine, dating back to the original Mini Cooper S, to the ’90s Leyland-owned classic Mini, to almost every modern MINI on the market. And I’ve enjoyed almost all of them. However, never once was the engine in the top five best things about them. MINI has never been good because of its engines, so electric power is just so much better suited to a brand that lives on low-down torque, low speeds, and big fun. I can’t wait to try the new electric future of MINI and the Aceman is a part of that.

What’s an 800 HP BMW M8 Convertible Like on the Autobahn?