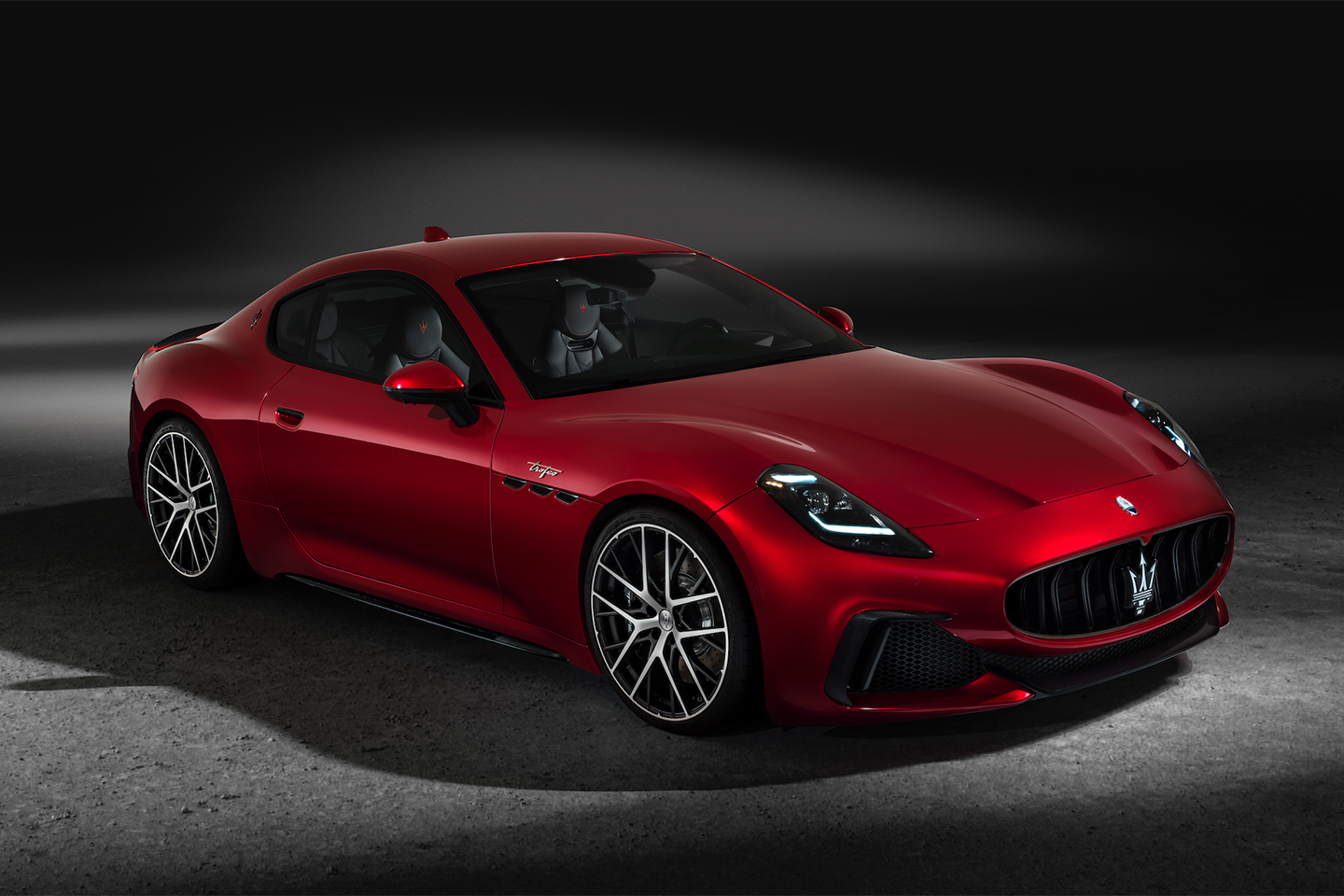 Consider the Maserati rebirth well and truly underway. In typical Maserati fashion it’s already a bit topsy turvy – by all accounts the MC20 is superb and the Grecale is not – but to be honest, it’s just nice to see things going on. A new Maserati used to arrive with a new Pope, but not any longer. Now it’s time for perhaps the biggest debut yet: the new GranTurismo.

Or to be specific, the big news is GranTurismo Folgore, the first all-electric Maserati and the car tasked with taking both the brand and the sector into uncharted territory. Ahead of Bentley, Rolls-Royce, Aston Martin or anybody else, it’s Maserati delivering a continent-crushing, battery-powered 2+2. We’ll get to the models powered by the MC20’s V6 in due course; it’s not every day that a brand like Maserati builds its first EV and claims it’ll do the best part of 200mph…

Yes, really. Thanks to a trio of electric motors (two at the back, one up front) and an 83kWh battery, the GranTurismo Folgore can make 1,200hp… but it’s actually being sold with 761hp. Still, Maserati says that’s enough for 2.7 seconds to 62mph, 8.8 to 124mph and to hell with limiting the top speed for range – it’s said to be 320km/h, or 199mph. Not that Maserati has actually officially stated a range yet for the Folgore because, well, y’know, Maserati. 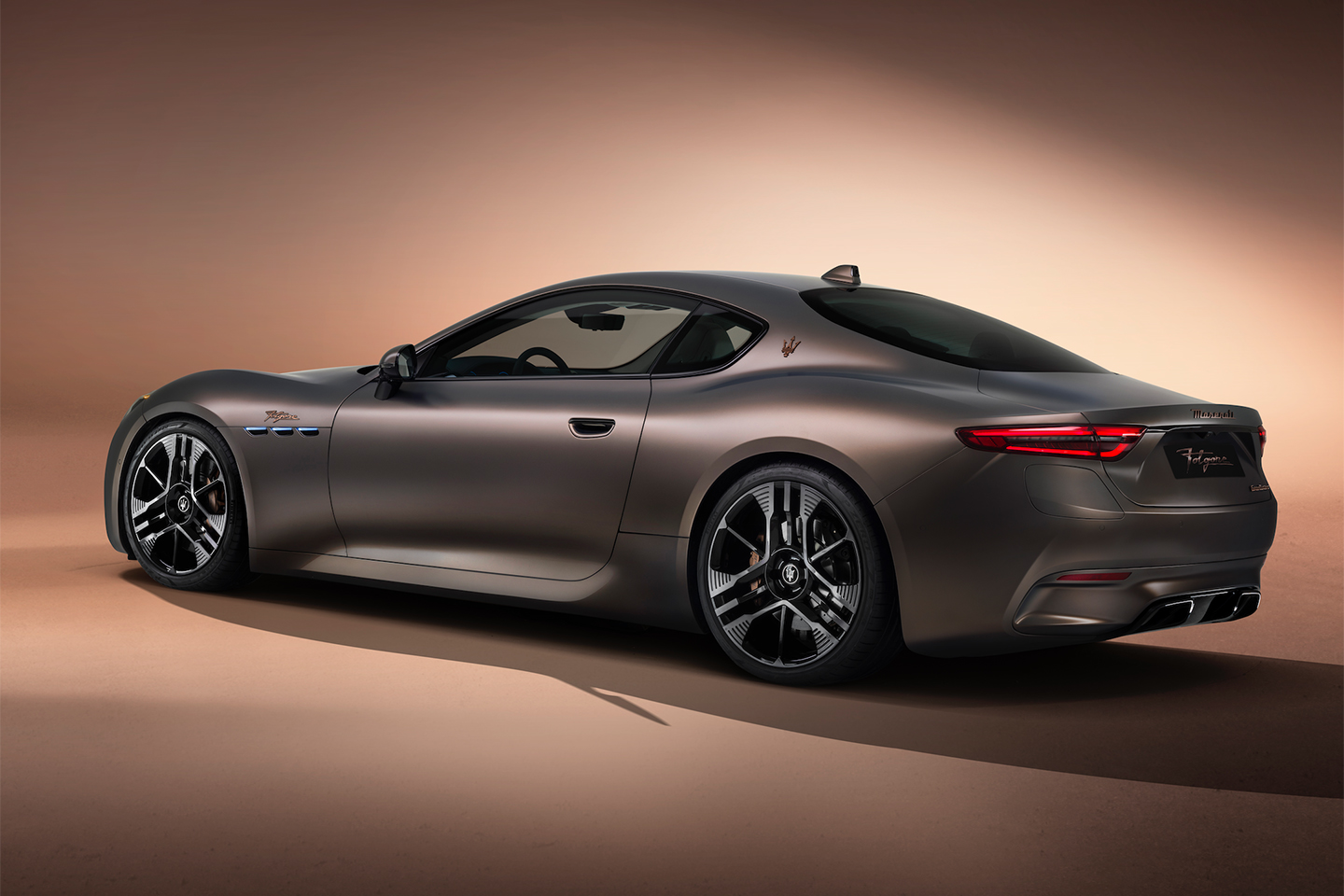 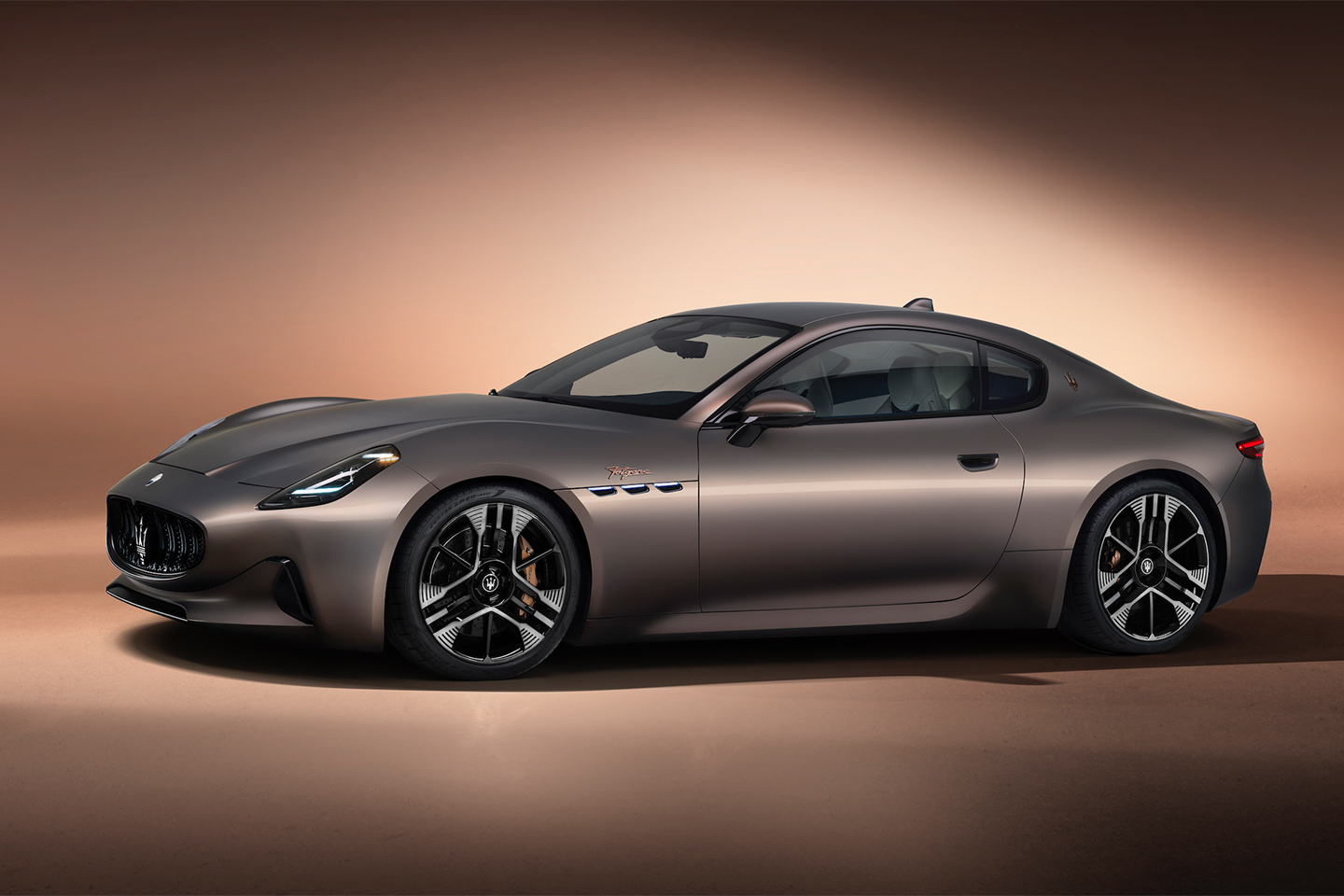 Nevertheless, there remains plenty to be encouraged by. Burly 800V architecture means, when the range does run out, the GranTurismo can accept 270kW of charge. The entirely new platform packs the batteries in a T-bone shape, so the modules aren’t under seats, which means the Folgore can still claim 2+2 status and the H-point is kept low. Maserati reckons the Folgore sits lower than any other electric car on the market – which would be some achievement given how cars like Audi e-tron GT already skim the surface (and drive so very well). The trio of motors are driven by silicon carbide inverters derived from Formula E (woooo) and regen offers up to 0.65g of stopping as well as lots of lovely, recovered energy.

Naturally, the electric powertrain can do plenty of clever chassis stuff for the Folgore, which is handy when you consider it weighs in at a chunky 2,260kg for Maserati’s ‘homologated weight’. The two rear motors operate independently for proper torque vectoring, and the all-wheel drive Folgore can be powered solely by the rear axle. In fact, for the drift mode that Maserati more politely call ‘Rear-Wheel Drive configuration’, the pair of motors are unleashed to their full 400hp potential (remember all three together could make 1,200). ‘GranTurismo Folgore can discharge 100% of the available power even with the rear axle alone in Rear-Wheel Drive configuration only, or can discharge up to 400 CV on a single rear wheel.’ Wowsers.

But, of course, Maserati knows that an electric GranTurismo could make you into a drift superstar, but if it didn’t sound very good then there’d be no point. A Maserati that doesn’t sound nice is like a chocolate biscuit that doesn’t taste sweet – it’s the USP. And rather tricky with batteries. So Maserati has spliced together EV sounds with a bit of traditional V8, augmented through synthesisers and the speakers both inside and outside the car. We can sense your apprehension. But that’s what’s happened: ‘the natural acoustic dynamics of the electric motors driven by the inverters have been digitally shaped and integrated with the typical sound taken from the Maserati V8 tradition.’ The Folgore is nothing if not intriguing, then, as is the whole vehicle concept. 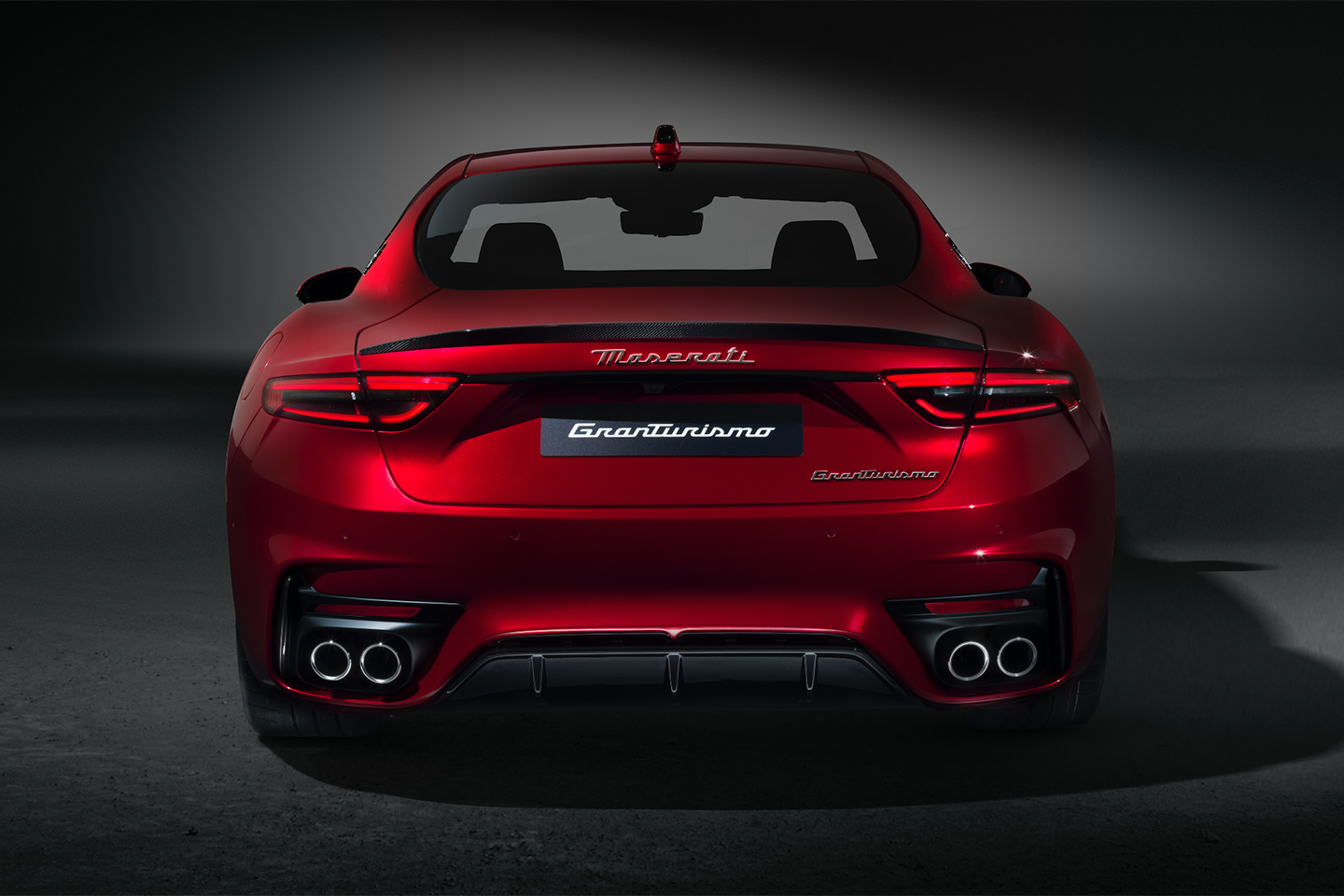 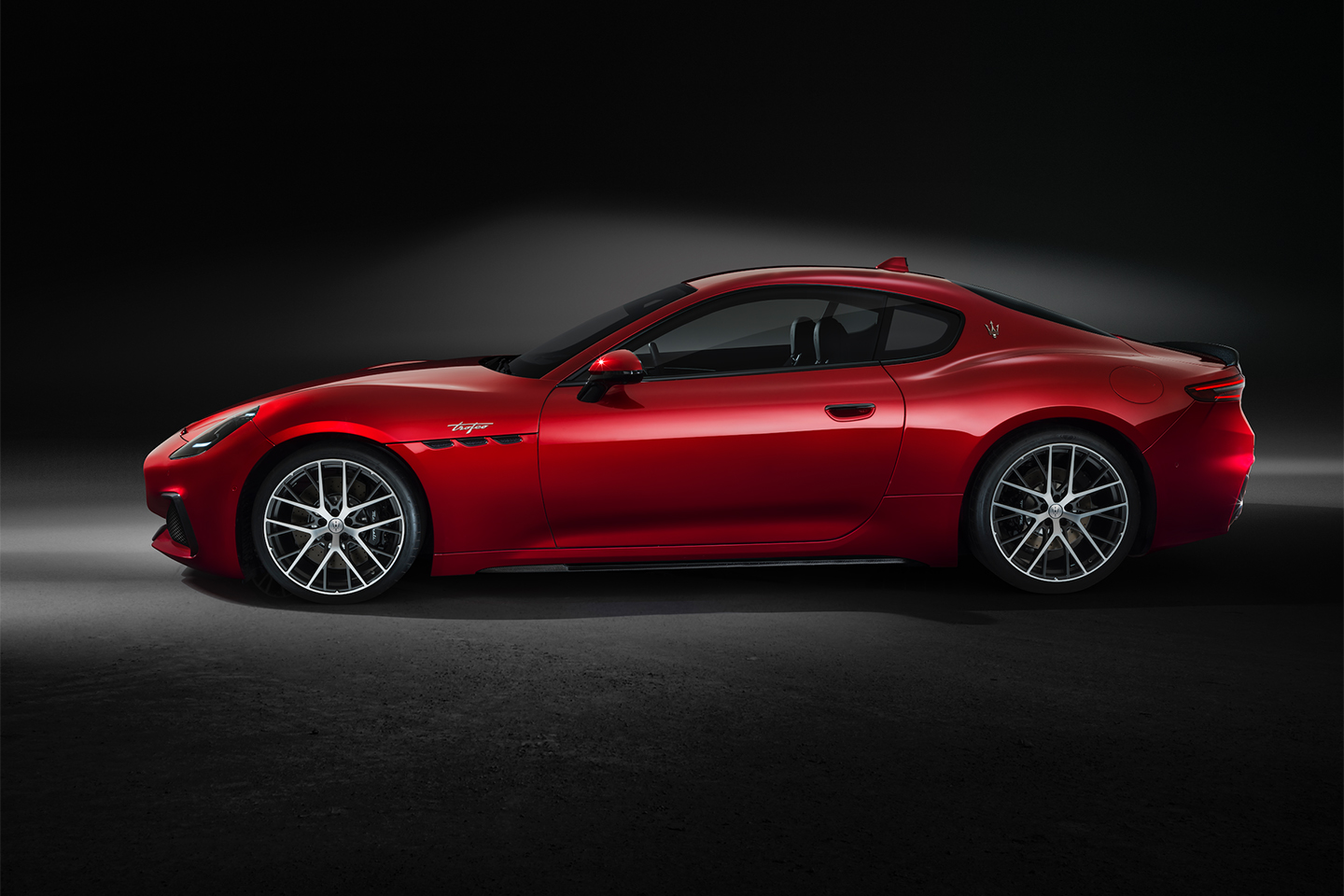 Those who prefer a more traditional approach to the GranTurismo might prefer the Modena or Trofeo models, both powered by a wet-sumped version of the MC20’s 3.0-litre turbocharged ‘Nettuno’ V6, complete with the pre-chamber combustion technology. Maserati says the new modular architecture now underpinning the GT was always designed with both ICE and BEV powertrains in mind, right back to the beginning of the project in 2017, and therefore not much modification is needed from Folgore to Trofeo and Modena. A genuine clean-sheet, zero-compromise design, the new car is comprised of 65 per cent aluminium, with magnesium also playing a part and steel only for ‘the most critical functions’.

The Modena gets 490hp, so we’ll focus on the Trofeo for the moment as that gets 550hp and is aimed at ‘enthusiasts for sports and adrenaline-fuelled performance’. With a standard ZF eight-speed auto shared with the Modena and a kerbweight usefully less than the Folgore at 1,795kg, the Trofeo should reach 62mph in 3.5 seconds, 124mph in 11.4 seconds and 199mph. It shares a lot of important bits with the EV, using the same double wishbone front end, multi-link rear axle and air springs. Significantly, every GranTurismo variant gets all-wheel drive. There’s no dedicated drift mode with the V6 (boo), though the ESC does go fully off. Drive modes are Comfort, GT, Sport and Corsa, with the Folgore driver choosing from Max Range, GT, Sport and Corsa. All of that is underpinned by Maseratis new, proprietary, Atlantis High electrical/electronic architecture. Controlled by Maserati’s Vehicle Domain Control Module with messages able to be sent in 2ms, the GT should offer ‘the best driving experience in all conditions.’

Just as it’s important to sound the part, the new Maserati must look it. And having spent what feels like an age teasing it in various states of disguise – including none at all – here’s the full thing: the Folgore is the brown one, the Modena the red. And no, you’re not alone in thinking it’s a little familiar to what came before. But then what better car to mimic than the old GranTurismo? And an electric GT is already a pretty drastic move; can’t have customers alienated with a zany new look as well. Recognisable Maser details abound, now alongside influence from both Grecale (see the front lights) and MC20 (see the rear ones) 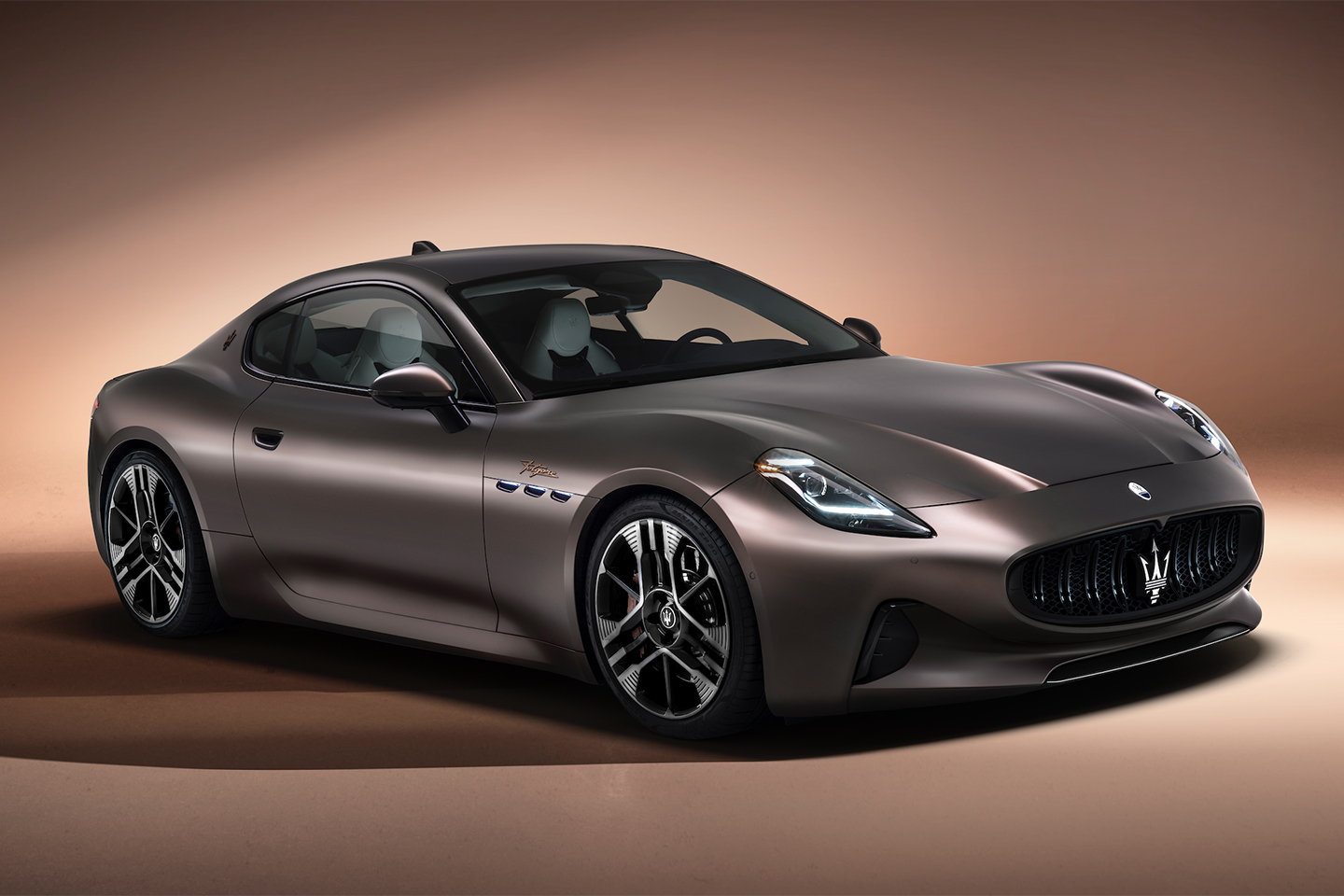 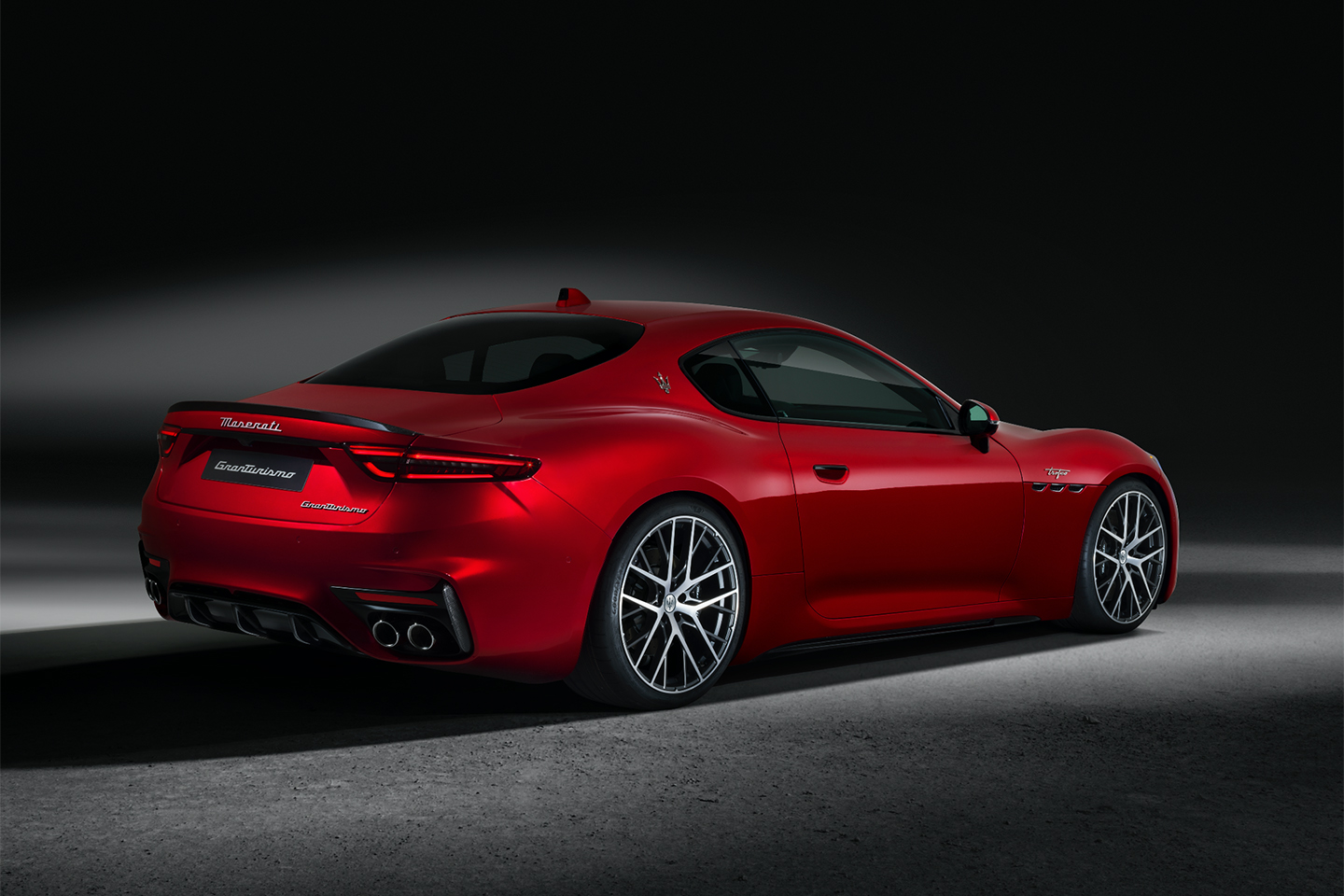 Unfortunately, it seems Maserati has chosen not to show the GranTurismo’s interior, either in pictures or video. (Maybe it came up in the zoom press conference when we weren’t looking.) Whatever the case, it’s a shame not to be able to share what must be a crucial bit of the GT experience. But we have some promises until there are some proper pictures: ‘A clean and modern design, devoted to functionality and design cues’, is apparently what’s coming, with a new multi-function wheel as well. Perhaps more importantly, this new car is said to be a true four-seater. There are 310 litres of boot space in the combustion-engined cars, too, or 270 in the Folgore. Not loads, then, but something.

The rest of the GranTurismo cabin is described as you might expect. Maserati’s interiors haven’t always been up to scratch in recent years, so this one really needs to deliver. Think of the cars this will rival, from Bentley Continental GT to Porsche Taycan – fail to measure up in the cabin and you can start scratching off sales from day one. Let’s hope the combination of tradition and craftsmanship ‘juxtaposed with innovation and technology’ is enough.

Of course, if this vital new Maserati comes out with more MC20 energy than Grecale – and it’s got to, right? – then you’re probably looking at the manufacturer’s much needed success story. There isn’t a launch date or price just yet, but Maserati has confirmed the GranTurismo will first be available with a PrimaSeries 75th Anniversary Launch Edition. It will feature ‘exclusive content dedicated to the production of the first GranTurismo 75 years ago.’ Expect more details on that, the interior, and the Folgore’s actual range, in due course.