The 2023 Nissan Pathfinder Rock Creek Edition continues a rising tide of lightly off-roadified crossovers (or, in one case a minivan). We’ve already tested the likes of the Ford Explorer Timberline (and enjoyed it), the Wilderness variants of the Subaru Outback and Forester (liked those too), Honda Passport TrailSport (meh) and even the Toyota Sienna Woodland (that one had us scratching our heads a little). Now, ahead of its introduction to market, we’ve had the opportunity to test the Pathfinder Rock Creek.

Nissan isn’t arriving late to the game, however. This is not the first time it has given the Rock Creek treatment to the Pathfinder, but with the clean slate of a new generation, the 2023 model now gets its time to shine. This time around, the Rock Creek recipe seems a little more successful than what was essentially a low-effort appearance package in the past. The 2023 Pathfinder Rock Creek actually gets an off-road tuned suspension. Its slight, 0.6-inch lift helps accommodate the gloss-black, beadlock-looking 18-inch wheels wrapped in 265/60 R18 Toyo Open Country all-terrain tires. The resulting 7.7 inches of clearance is still a full inch shorter than a stock Subaru Ascent (and less than quite a few other crossovers), though at least the tires will provide better traction off pavement and the aesthetic foundation for the rest of the package. 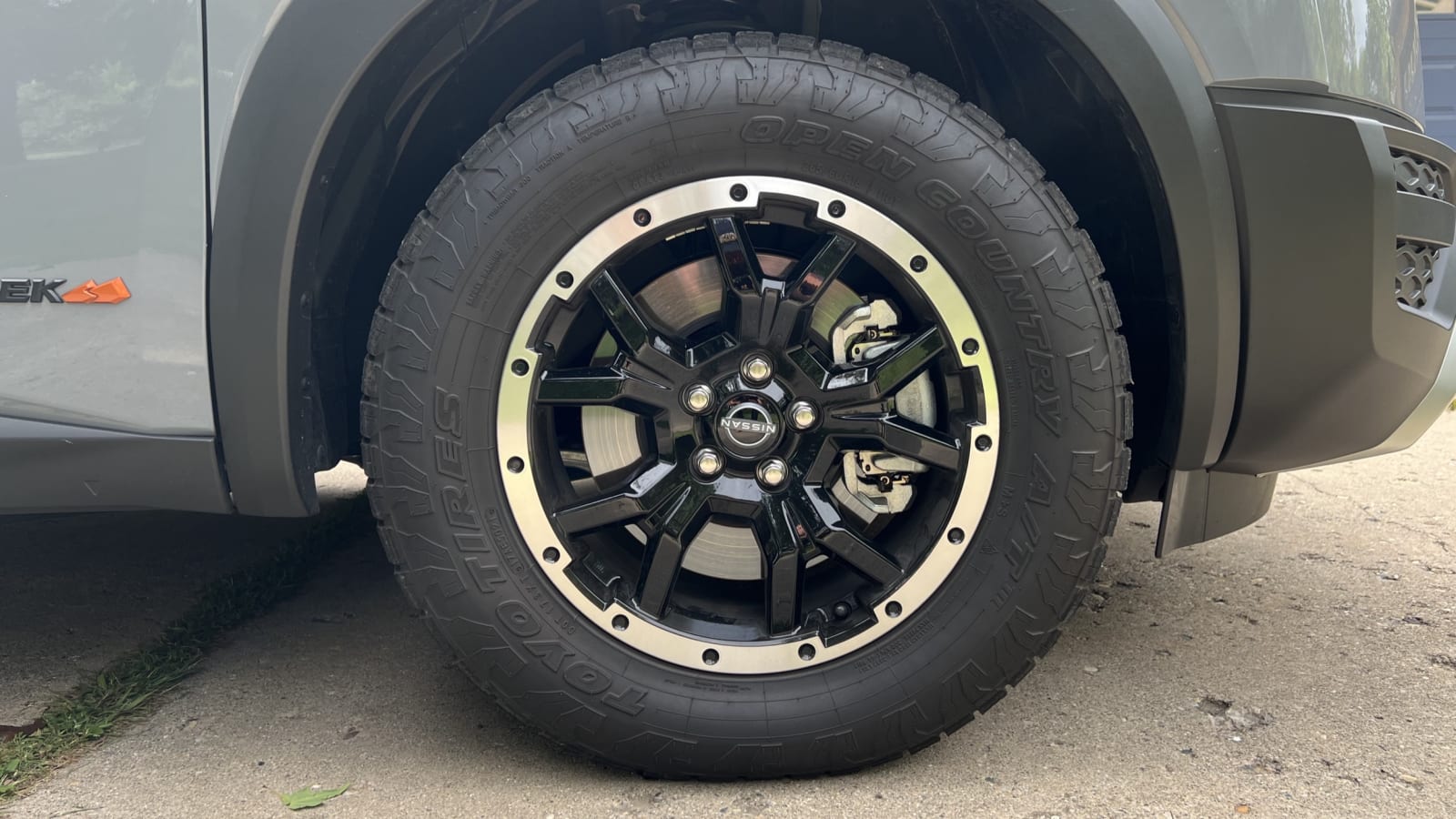 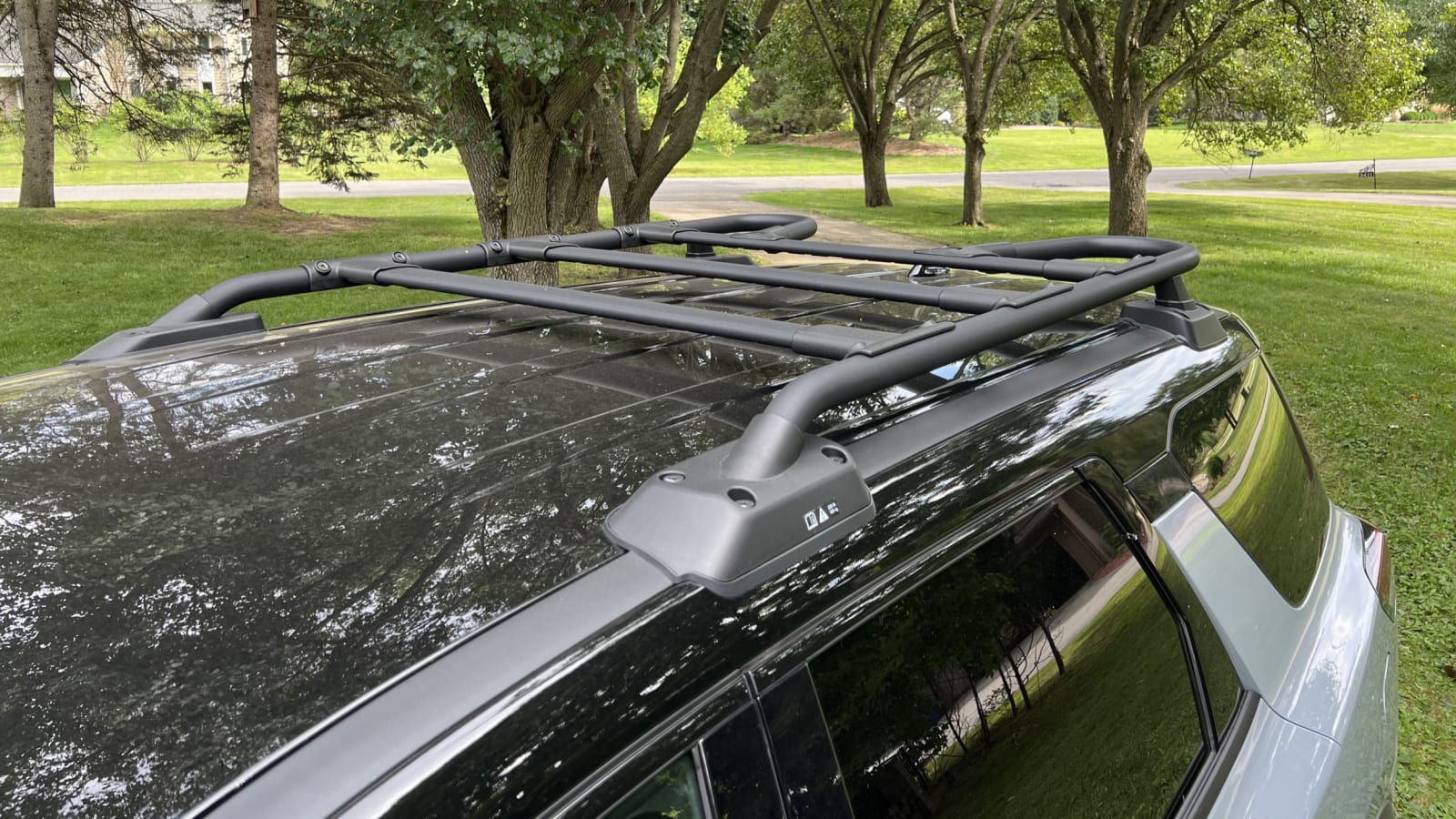 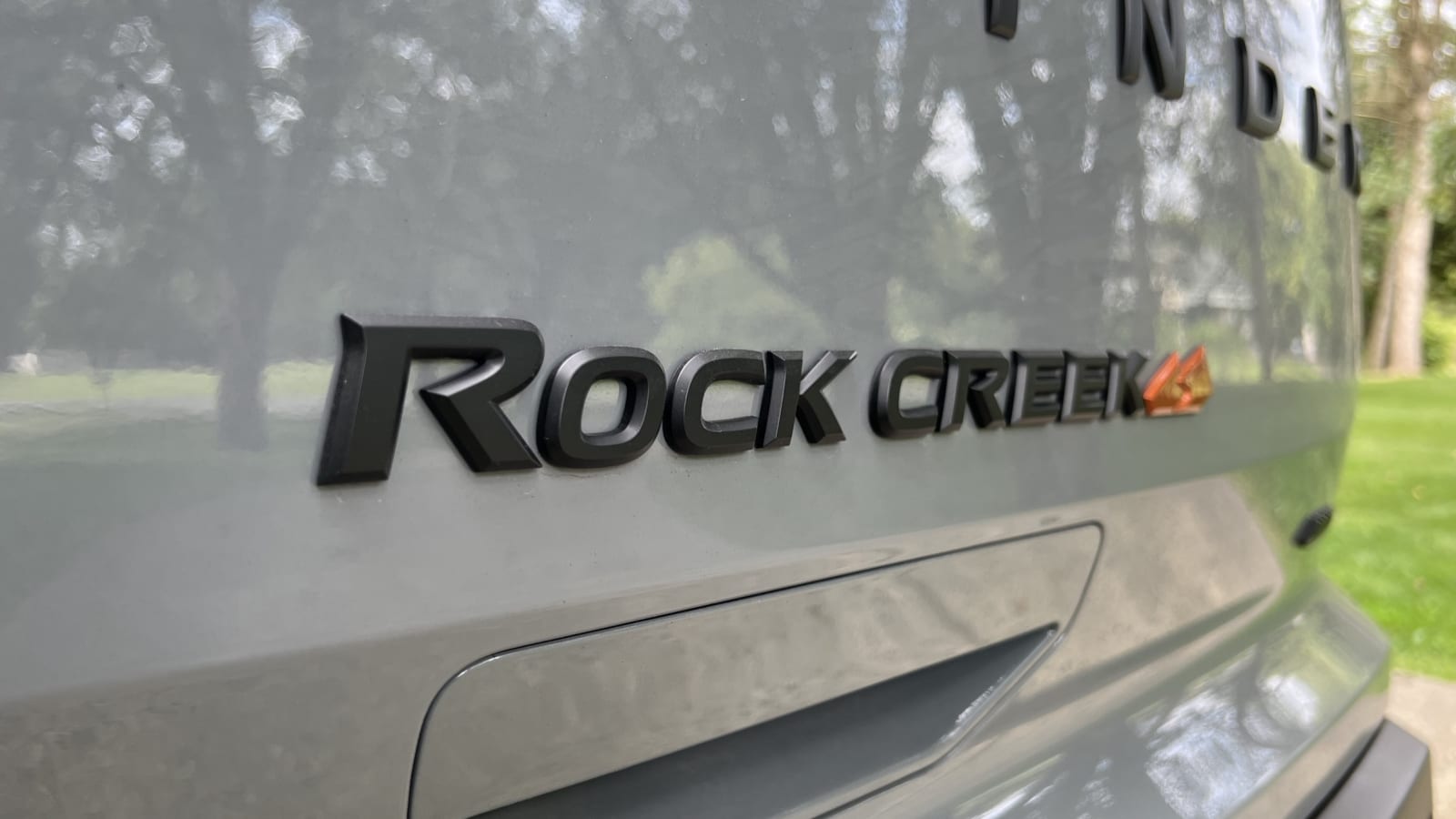 The Rock Creek gets a tubular roof rack, which further helps ruggedize the looks while providing an extra place to store up to 220 pounds of luggage or equipment for when you need to disappear into the wilderness for a couple weeks. Up front is a fascia exclusive to this special edition, with a unique grille featuring a mesh insert in gloss black to match the wheels. LED foglights are standard, while a standard tow hitch receiver and harness are good to pull up to 6,000 pounds (an above-average amount for a three-row crossover). Of course, there’s Rock Creek badging on the exterior, with gloss-black lettering and an orange mountain logo, to let other drivers know that this isn’t a run-of-the-mill Pathfinder. All the black Rock Creek pieces and orange accents looked great against our tester’s two-tone solid grey and black paint scheme.

Surprisingly, there’s even a slight powertrain enhancement for the Rock Creek. Revised fuel mapping means the 3.5-liter V6 can make a total of 295 horsepower and 270 pound-feet of torque, up from the standard 284 hp and 259 lb-ft. Nissan says you have to use premium fuel to achieve those improved numbers, but that the vehicle will run just fine on regular gasoline. Four-wheel drive is standard along with the same drive modes as every other all-wheel-drive Pathfinder — Standard, Sport, Eco, Snow, Sand, Mud/Rut and Tow. 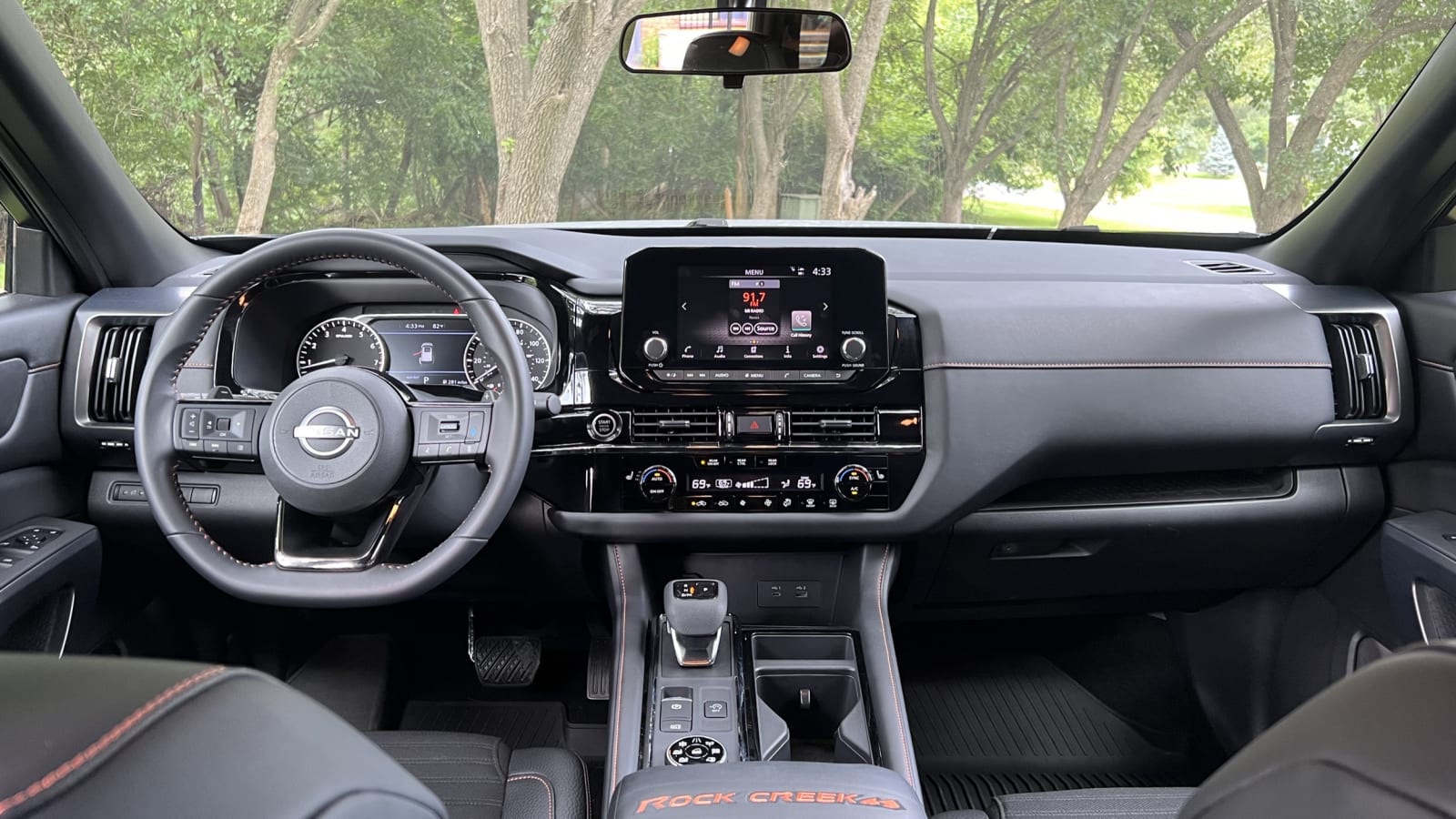 Inside, the Rock Creek gets leatherette-trimmed seats with cloth inserts, as well as orange Rock Creek logos embroidered into the seatbacks. They do a good job of blending support: the firmer fake leather bolsters good a job around corners while the cushy comfort of the fabric middle portion is nice on long drives. Look around and you’ll see orange contrast stitching on the seats, dash, center console, door panels and steering wheel, plus another embroidered Rock Creek emblem on the center console armrest. The second row gets standard captain’s chairs with a removable center console. The car’s 360-degree parking cameras double as an off-road monitor, automatically projecting the camera feeds on the 8-inch infotainment screen (which is the Pathfinder’s base unit — SL and up get a 9-inch unit with navigation) whenever you shift into Mud/Rut or Sand mode. All this comes at a price of $44,115, including a $1,295 destination fee. That positions the Rock Creek smack in the middle of the Pathfinder lineup, between the all-wheel-drive SV and SL trims. While we don’t particularly miss SL features like navigation, a wireless charger, wireless Apple CarPlay (wired CarPlay and Android Auto are standard across the lineup), power liftgate or traffic sign recognition, we wouldn’t mind being able to opt for additions like a heated steering wheel or a 120-volt plug. The latter in particular seems like something that would be useful on the sort of outdoor adventures this special version is supposedly intended for. And certainly some adventurers will miss the opportunity to get a panoramic sunroof as well.

The Rock Creek’s off-road-tuned suspension doesn’t do any harm in terms of ride comfort or stability, and soaks up road imperfections well. Neither is there any extra squat and dive you might get in a Toyota 4Runner. When the pavement starts to curve, the Rock Creek’s dynamics don’t fall apart — rather, they hold up surprisingly well. The chassis setup that so well manages the imperfections on the road does a fine job of managing body roll. Your passengers won’t have to dig their nails into the armrests toe stay planted in their seats.

What you do get from this off-road setup in motion is some tire roar. It’s not the kind of intrusive cascade of sound you’d get from the Subaru Forester Wilderness, which can give you the feeling of rolling down the highway in a tin can. It’s more of a flat hum that provides a sense of comfort, letting you know the knobby tread and tall sidewalls are there to help you crawl over whatever may come your way once you exit the highway and turn down a rural back road. 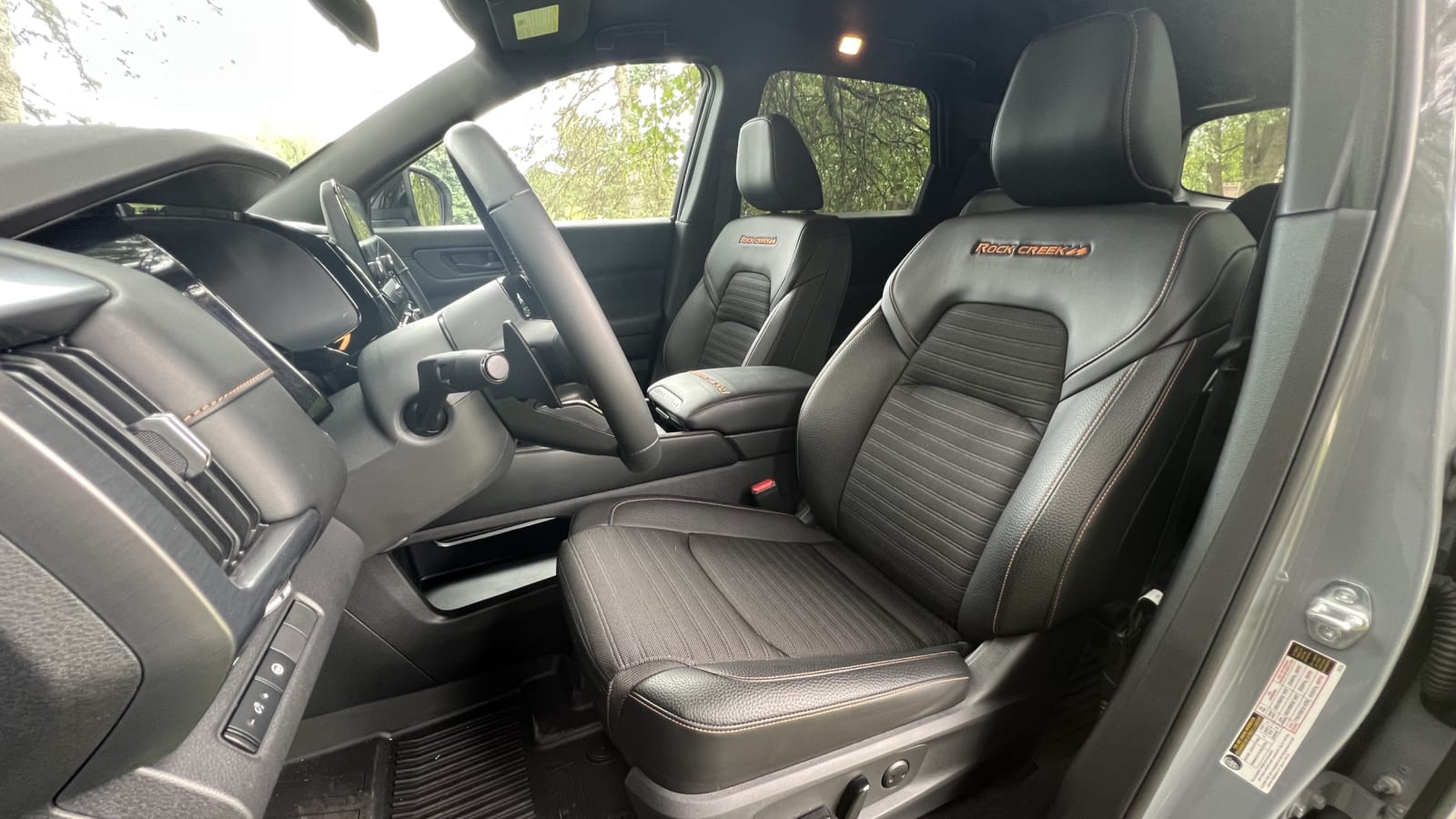 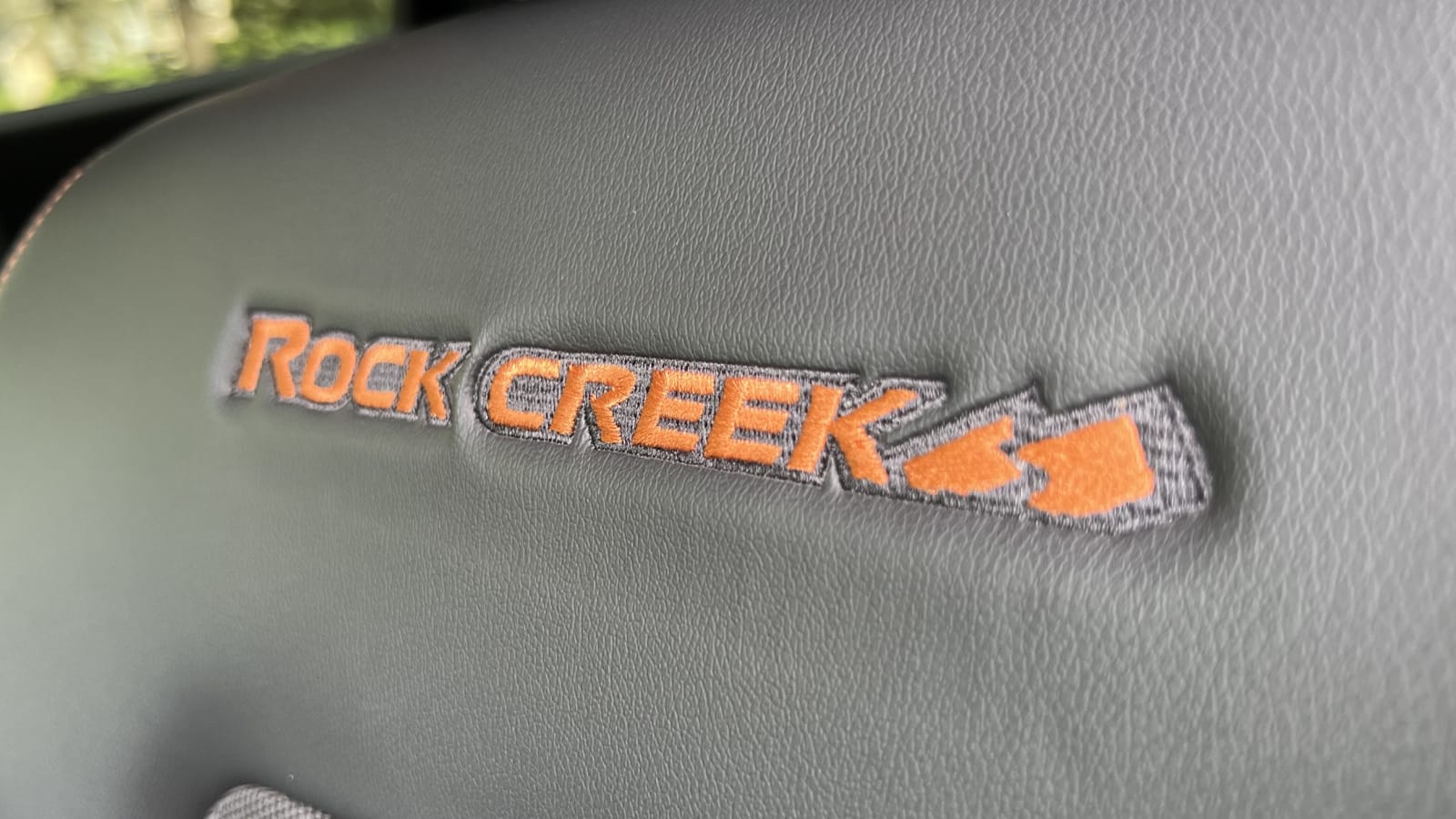 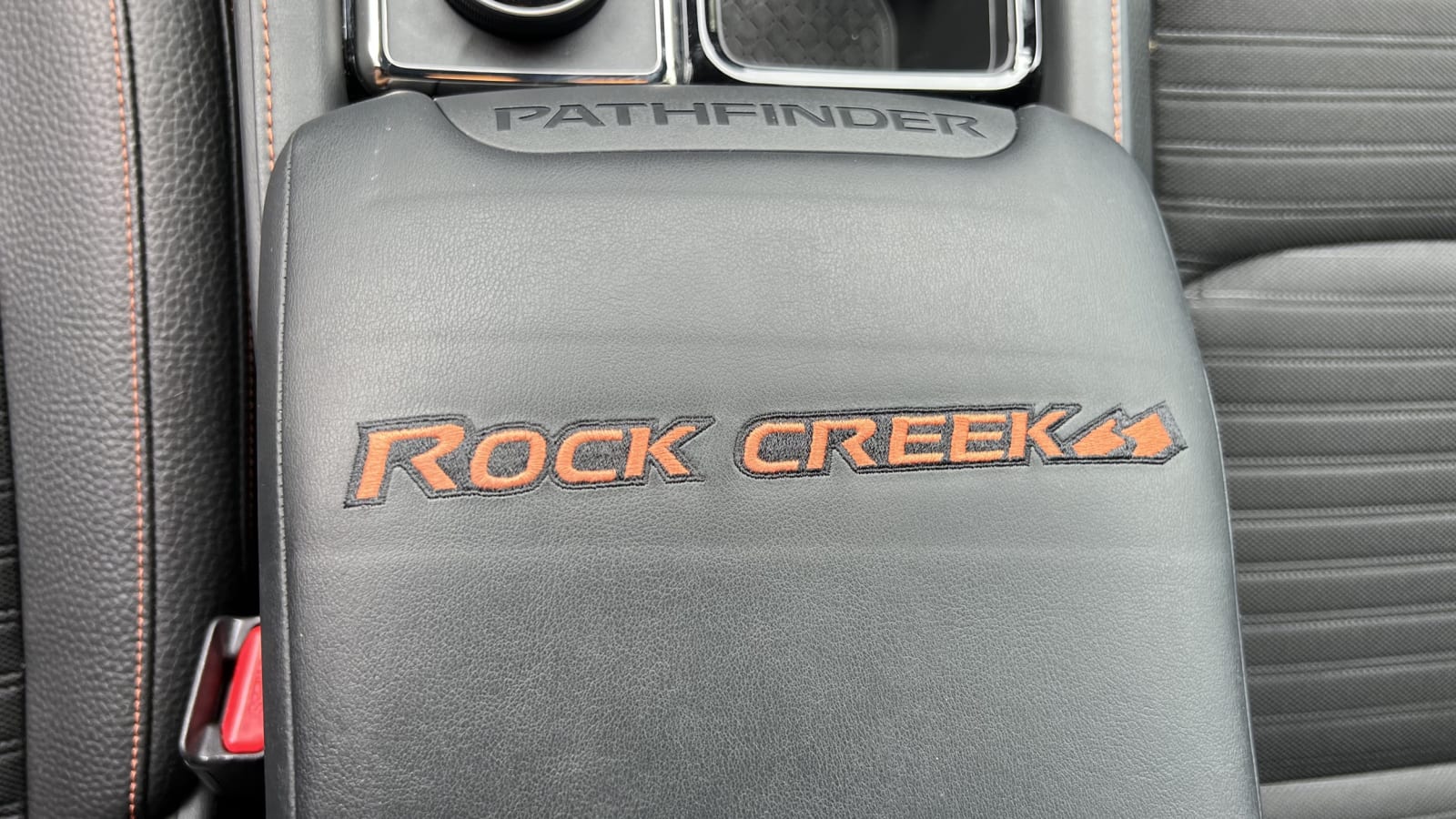 As for that extra power, well, we’ll take Nissan’s word for it. A boost of 11 horsepower and 11 pound-feet of torque (and only if filled with premium) doesn’t really register in terms of driving feel, but it nevertheless seems ample enough to get the vehicle’s 4,605 pounds of curb weight moving without complaint. As for fuel economy, the Rock Creek suffers slightly. At 20 miles per gallon city, 23 mpg highway and 21 combined, it’s just a midge below the SV 4WD’s 21/27/23 mpg and the SL’ 4WD’s 20/25/22 mpg.

Now, if you look closely at the photos here, you might notice some funky things — specifically uneven material surrounding the embroidery in this tester. Keep in mind, this is a pre-production version and such literal and figurative wrinkles are typically ironed out in the production line.

And, yes, while this new Rock Creek Edition has a little more functionality than the one from the last-gen Pathfinder, the looks might still be the most important part of this package. And this vehicle really delivers in that department. Even if the furthest off-road it gets is the grass parking lot at the county fair, it still looks good enough to draw admiring comments from fellow fairgoers. You can even tell them it’s more powerful than other Pathfinders … just hope they don’t ask by how much.

Lego gets Fast and Furious with Nissan Skyline GT-R

The official press release of the Lamborghini Huracán Sterrato