Although the M4 CSL made a big splash earlier this year at the Goodwood Festival of Speed, BMW actually brought a left-hand-drive car. It’s finally showing the RHD version of the Competition Sport Lightweight, limited to 100 units for the United Kingdom or 10% of the entire production run. The third-ever CSL is presented in the Frozen Brooklyn Grey color with red accents and the 50 years of M anniversary emblems.

As with the LHD configuration, the M4 CSL destined for the UK is being sold strictly as a two-seater since the rear bench is deleted to save weight. The hardcore coupe is a substantial 100 kilograms lighter than the M4 Competition Coupe upon which it’s based and packs an extra 40 horsepower from its retuned inline-six engine. All cars are being built with an automatic transmission sending power to the rear axle.

The UK-spec M4 CSL cost from £128,820 and in return, you’ll be getting the fastest production BMW to ever lap the Nürburgring (7:15.677). It gets the 50 years of M anniversary emblems and can be optionally painted in Alpine White or Sapphire Black. While the 2023 M3 Sedan and M3 Touring come with the newer infotainment system, the CSL retains the iDrive 7. 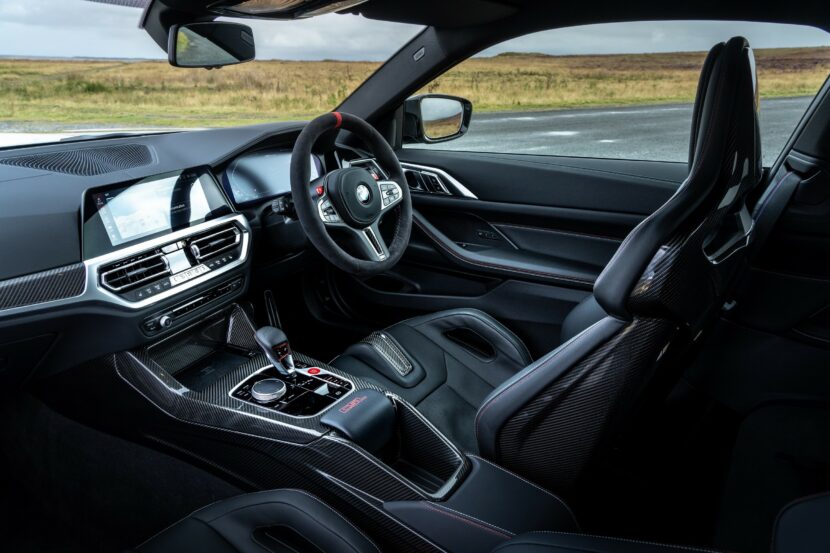 Being the most expensive M4 of them all (well, at least until the 3.0 CSL arrives in November), the M4 CSL has standard laser headlights and taillights, with the latter representing an absolute premiere for a BMW. It also gets bespoke 19-inch front and 20-inch rear wheels with carbon-ceramic brakes while the interior hosts a pair of bucket seats exclusive to this model.

Although the M4 CSL is all about lightness, BMW UK still gives buyers the option of some fancy tech such as a head-up display. It’s available by getting the Ultimate Road Pack, which bundles niceties like a wireless charging pad, electrically folding mirrors with automatic dimming, the Driving and Parking Assistants, and Comfort Access.

As a final note, BMW UK is also getting the M3 Touring. This was made possible after the local division together with the equivalent branches from Australia and Japan convinced the higher-ups from Munich to green-light the right-hand-drive super wagon.