Taking our long-term 2022 Kia EV6 GT-Line on road trips to test both it and our country’s charging infrastructure is one of the big reasons why we decided to spend a year with this EV. So, when the opportunity for me to embark on a 1,300-mile journey came up, I jumped for the EV6’s keys.

The route? Detroit to Saratoga Springs, N.Y. That’s just over 650 miles there and another 650 miles back — of course, like any road trip, I took a number of detours along the way that caused the total mileage for the trip to be closer to 1,400 than 1,300. Having experience in electric car road trips helps make future ones smoother — you’ll go in knowing that there’s far more prep work necessary than hopping in a traditional gasoline-powered car for a long trip. Some EVs (namely Tesla) make this prepwork either negligible or non-existent thanks to navigation systems that automatically route you through charging stations for maximum efficiency. However, our EV6 has no such advanced routing software.

I turned to the handy PlugShare app (there are ads, but it hasn’t let me down before) to map a route from Michigan all the way to eastern New York. Assuming you tell the app what EV you’re driving, it will automatically suggest charging stops along the way that take into account the car’s range. For the first 650-mile stint, it required three charging stops, all near the major cities of Cleveland, Ohio, Buffalo, N.Y. and Syracuse, N.Y. I spent the evening before the trip topping off the EV6’s battery to a full charge, which is highly recommended to get you going strong on the first leg of any EV road trip. 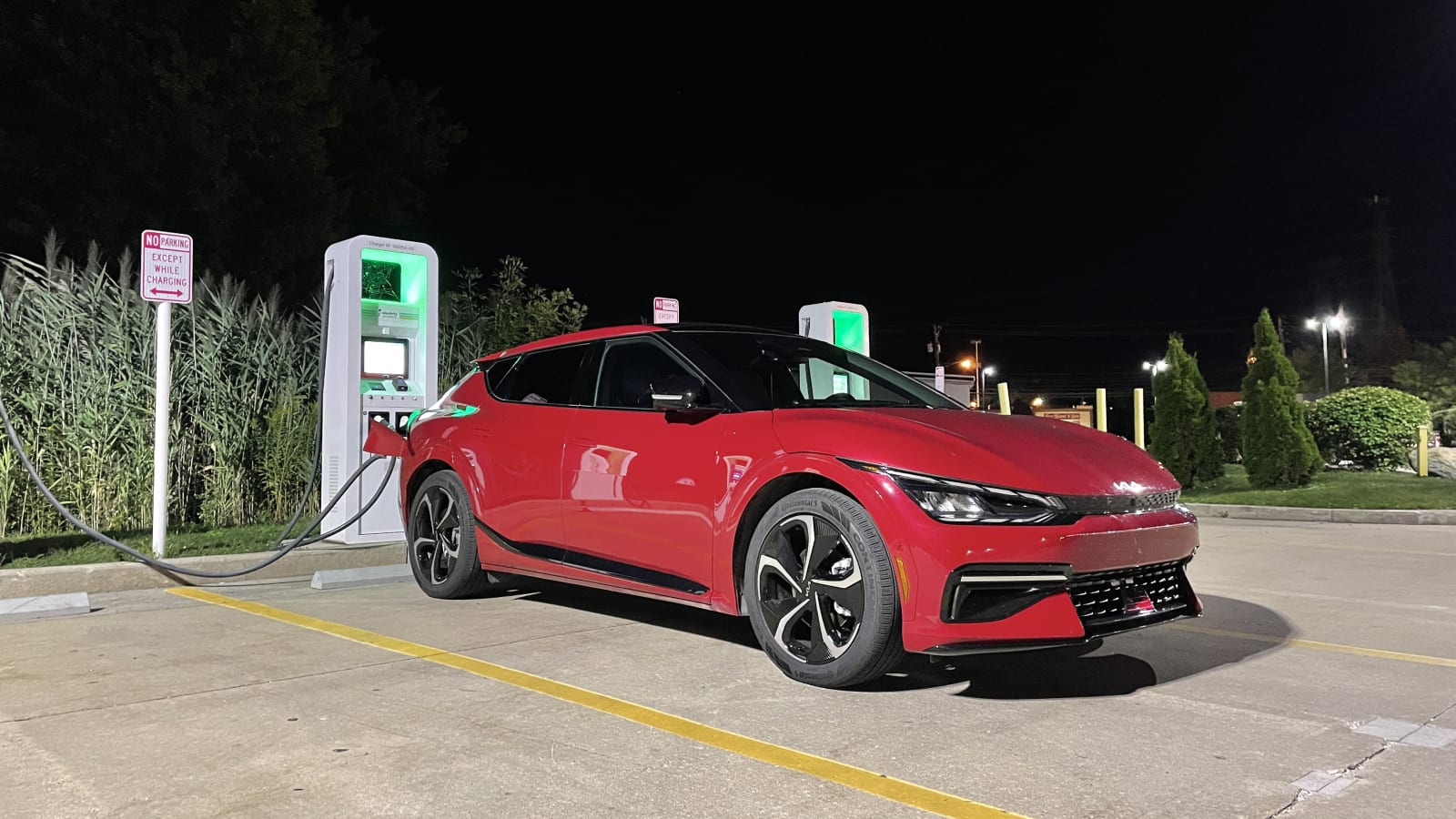 At my first stop along the way just outside Cleveland, the initial attempt at charging at a Electrify America station was a failure due to a broken payment terminal. What a great start! I moved the car over to the next stall, and this charger worked flawlessly. If you’ve ever experienced a particular pump not working properly at a gas station, requiring you to move to a different one, the experience is similar here, but a little worse. It simply takes longer to maneuver the giant, heavy plugs and get the electricity flowing than it does to pop a gas nozzle into a car.

Once juice is flowing, this is where the EV6 shows its superiority over most other EVs. The charging speed quickly ramps up to and even past 230 kW, meaning you only need to spend about 15-20 minutes to go from a 0-80% charge on chargers maxing out at 350 kW. A 20-minute stop still isn’t as convenient as a five-minute fuel stop, but if you’re someone who likes to take breathers on road trips, it’s the perfect-length break to stretch the legs and grab a quick bite to eat at a fast-food joint (hopefully there’s one nearby). Kia’s app, which we’ll touch on in a future update, does a lovely job of keeping you informed about how much charge the car has, and will even notify you if the car unexpectedly stops charging due to a charger malfunction — yes, this happened later on in the trip. Electrify America’s app will also do this.

From Detroit to Buffalo, it only took six hours and some change. Most gas-powered cars could do this trip without a single stop in 20-30 minutes less time, which is notable, but it’s hard to get worked up over an extra half hour. Charging up in Buffalo for the N.Y. leg of the trip was met with another small annoyance. As soon as I made it into the nearby Walmart to aimlessly stroll about for 15 minutes, the charger “broke” and stopped charging the car. Of course, EV chargers tend to be in the far-reaching parts of any lot, so I needed to make the long trek out to the car and plug into one of the other available chargers, causing more time to pass and even more irritation. This one worked the whole time (and thank goodness it wasn’t already occupied), but with my trust broken, I didn’t leave the car’s side. 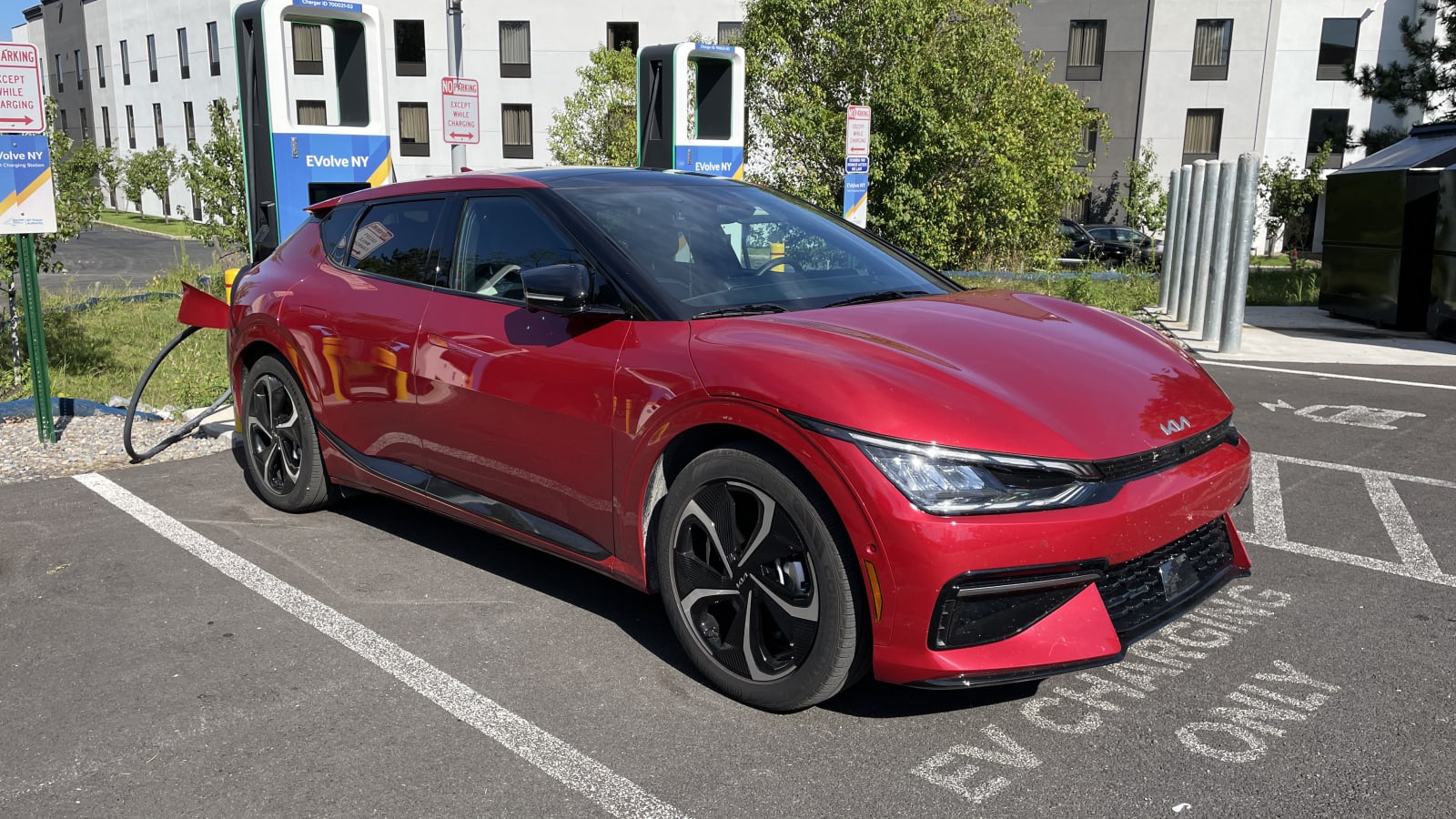 That’s two charging stops with two minor annoyances that in the end were easily overcome. Still, that’s two annoyances too many, and if these charging stations were full of other EVs charging, I would’ve been out of luck and subjected to much longer waits. Luckily for me, I hit these Electrify America stations when they were deserted.

The last charging stop in Syracuse was the least troublesome and best of the bunch. It was an Electrify America station, but was part of the Evolve NY program that the state is touting to increase the number of charging options. Every charger at the station was working flawlessly, and the car charged at its peak potential. This is how it should work!

By this time, I had enough miles under my belt to deem our EV6 an amicable and friendly road tripper. The sheer amount of space and cubbies up front and in back allow you to stuff personal belongings in convenient places all over the car. Lacking a transmission tunnel meant that larger items can be placed under the center console in a nice bin. The armrest hides a massive storage area that is as deep as some full-size pickups. Cubbies in both doors are great for water bottles, and the pair of cupholders in the center can fit additional drinks if you’re the type of person who wants options on a long trip.

One gripe, and it’s a small one, is the awkward USB cable management for Apple CarPlay or Android Auto. Despite its flashy big screens and wonderfully placed wireless charging pad, the EV6 doesn’t offer wireless smartphone mirroring tech, so you need to plug in your phone. Unfortunately, the USB data port is far forward under the dash and not within one of those aforementioned bins. The closest one is the large, purse-sized one under the center console. Is that really where you want to keep your phone? It is not. 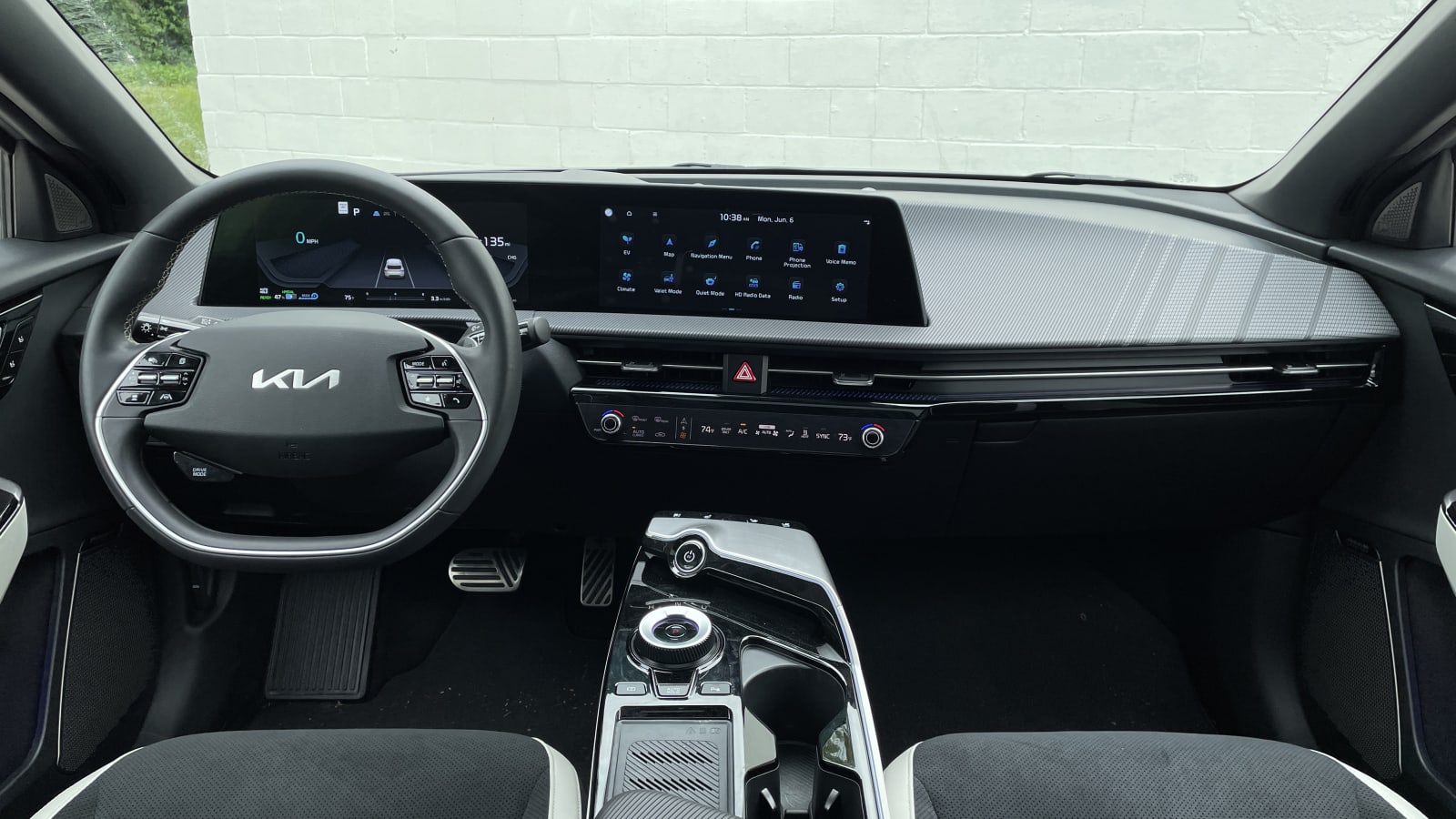 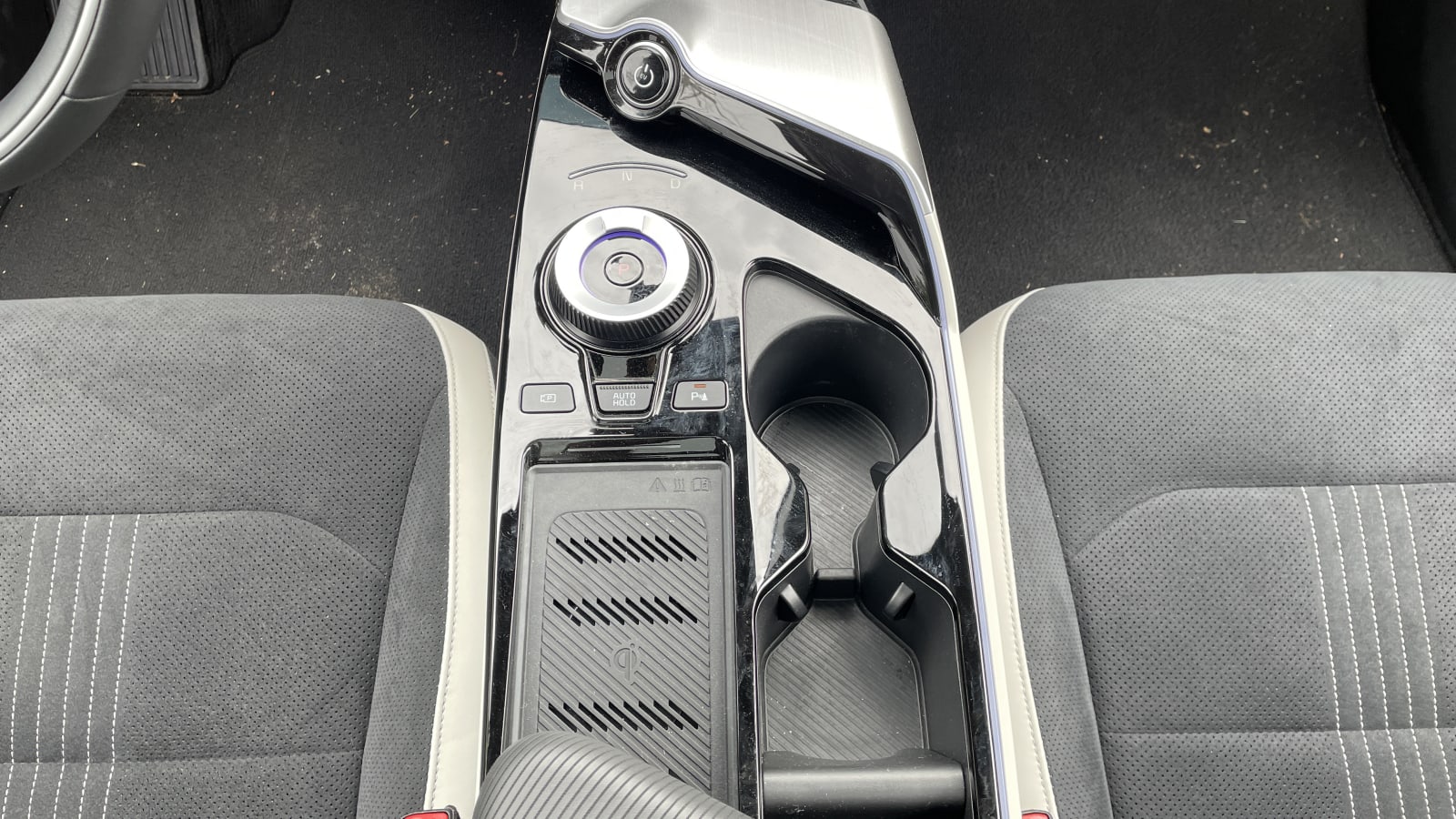 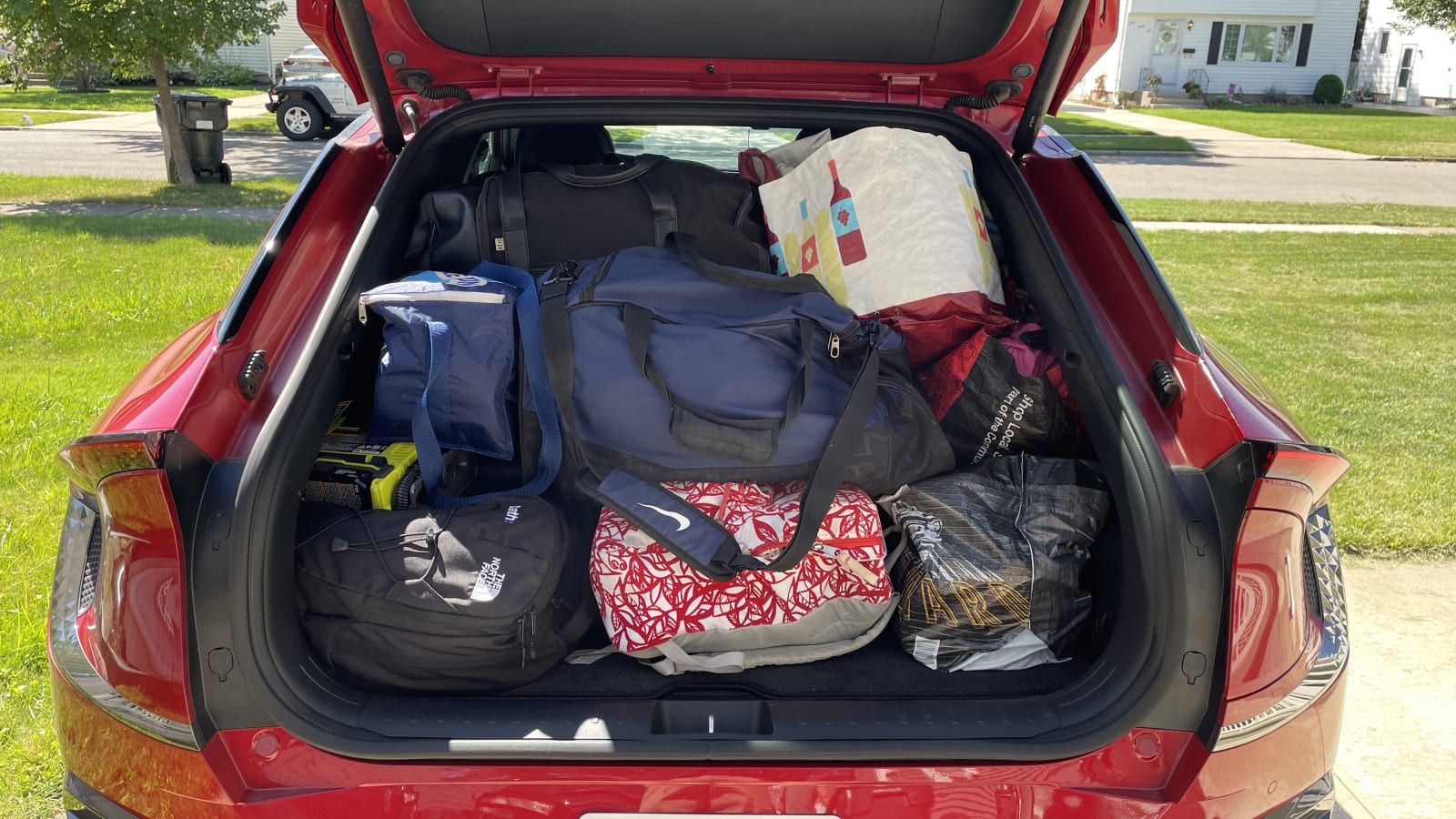 Ride quality on the highway is pleasant, but not luxurious in any way. The EV6 features passive dampers, and the tuning toes the line between being fun-to-drive and pure comfort. It’s not a sore point, but the ride isn’t gold star-worthy either. What is gold star-worthy, though, are this car’s driver assistance systems. I’ve already sung the praises of the Hyundai Group’s Highway Drive Assist systems, and the praise continues in the EV6. Lane tracing is astoundingly good for a hands-on system, and while it’s not quite as reliable as something like GM’s Super Cruise, the performance through curves and other more difficult highway sections is superb. Only one condition tripped the lane-following up, and that was driving directly into bright sunlight with the sun low in the sky. For whatever reason, direct sunlight discombobulates the cameras, and the EV6 struggles to find the lanes. It’s best to just turn everything off in this case, as it will still tug and vibrate on the steering wheel, in some cases even sending you off course and into another lane. Our EV6 has already received one over-the-air update since we took delivery of it, so perhaps this is something Kia could address with software.

Once in Saratoga, I found a Level 2 ChargePoint charger to plug in overnight. Before I woke up the following morning, the EV6 was already back at 100% and ready to go. In the realm of very good news, every charging stop on the return trip to Detroit was mostly uneventful. One of the stations I stopped at in Pennsylvania had a few chargers that were down, but lucky for me again, I was the only EV there. Out of curiosity on the way back home, I stopped at and tested the payment terminal at the Ohio station that was broken on the way to New York. Yep, still broken. A charging station being out of service for days on end along a busy highway corridor is flat-out unacceptable, but that’s exactly what we experienced firsthand at the Mentor, Ohio, Electrify America. 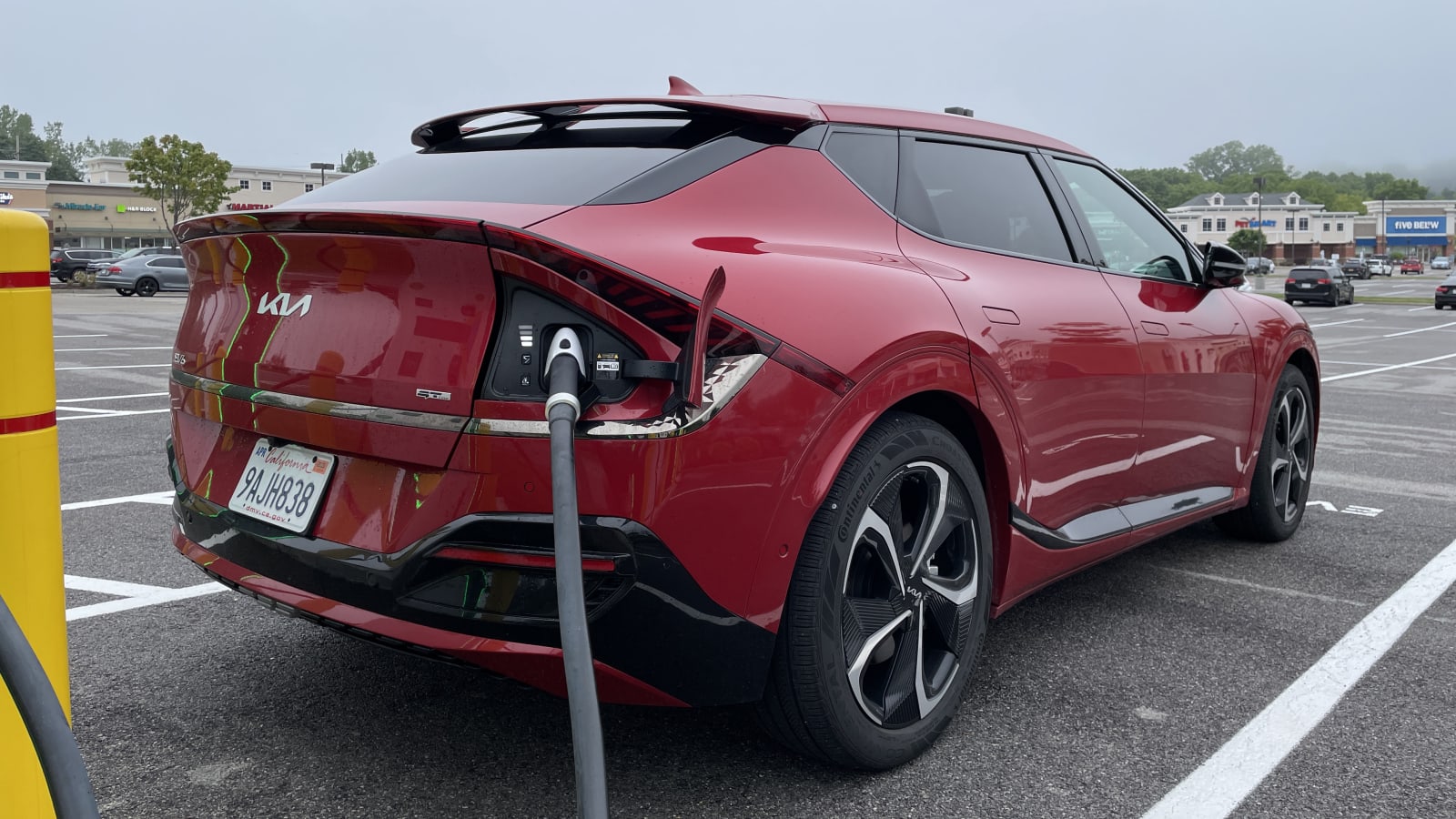 Efficiency hovered between 2.9 miles per kWh and 3.2 miles per kWh, depending on my driving style — the EV6 is EPA-rated at 3.2 miles/kWh. Watching the range prediction in real time gives you a sense of how efficiently you’re driving, too. Keep it around 70 mph or below, and the EV6 is in its highway happy zone. Push the cruise control closer to 80 mph, and your range begins to fall away far quicker. That’s no new phenomenon when it comes to EVs, as driving long distances at highway speeds ends up using far more energy than driving the same distance at slower city speeds and in stop-and-go traffic. If you start with an 80-90% charge in the EV6 AWD, you can travel at highway speeds for about 200 miles before the charge dips to and under 10%, which is when you really want to start looking for a charger. We’ll check back in once the cold weather arrives to see just how much of an efficiency hit the EV6 takes in below-freezing temperatures.

As for charging costs, driving 1,400 miles in the EV6 cost just over $150. Fast-charging your electric car is the most expensive way to charge it, but that’s the reality when you’re on a road trip. To achieve cost parity with a gas-powered vehicle at today’s average fuel prices, you’d need to average about 35 mpg. As a comparison to a similarly-sized vehicle you can buy on the lot alongside an EV6, the 2023 Kia Sportage with the 2.5-liter four-cylinder and all-wheel drive is rated at 28 mpg on the highway. This Sportage would’ve cost about $190 in fuel for the same distance. Meanwhile, a Sportage Hybrid with all-wheel drive gets 38 mpg on the highway, and would cost about $140.

Would it be nice if your sacrifice in time at charging stations resulted in drastically reduced travel costs? Yeah, it sure would be, but that’s not reality today. In the end, this EV6 road trip was a pleasant surprise and a great way to show off how damn quick it can charge. Almost every stop I made was about 15 minutes in length, and the only reason I stayed stopped for longer on a couple occasions is because I was eating nearby. You may not take advantage of an EV’s ultimate charging speed often if you’re someone who plugs in at home every night, but when on a road trip, having an electric car like the EV6 can make a massive difference in overall travel times.

To read all of our coverage on our long-term 2022 Kia EV6 GT-Line test car, click here.