On our way to a future dedicated to EVs, BMW has taken transitional steps, placing electric powerplants into some vehicles previously dedicated to internal combustion. Case in point: the BMW i4.

An i4 appears to be just another 4 Series Gran Coupe. It doesn’t look cyber-anything. If you failed to spot the i4 badge in back or the lack of tailpipes, you’d never know. You won’t even find a frunk, since all the electric bits went where the greasy bits used to be. Under the hood is a vast plastic cover that stretches fender to fender (or a big hole if you get the single-motor i4 eDrive40).

The oversized 4 Series grille remains a visual stumble, and a paradox for a car that doesn’t need a grille at all; it’s mostly hiding sensors, its expanse broken up by the license plate strapped across the middle. Look past the nose, and the i4 appears to be a typical, handsome BMW sports sedan (this one with the convenience of a liftback).

But this is the i4 M50, so how it looks is one thing, what it does quite another. Two electric motors spin all the wheels and whip up all kinds of performance — peaking at 536 horsepower and 586 pound-feet of torque that can be summoned in 10 seconds of Sport Boost. That’s more than an M4 Competition; in terms of torque, it’s way more. Car and Driver clocked the i4 M50’s 0-to-60 performance at 3.3 seconds, two-tenths faster than the M3 Competition.

I recently took an i4 M50 on a quick road trip, and in normal driving you’d never know the car had superpowers. But hit the metaphorical gas and awaken a monster. (Will “hitting the gas” become a language vestige like “dialing the phone”?) We often use the terms “head-snapping” or “bonkers” around here to describe acceleration, and it’s true. Every noggin in the car bonked off the headrests — including my own, despite the fact I knew what was coming and braced for it. Cue the Hans Zimmer soundtrack. Good thing the steering wheel controls feature a speed limiter.

On a cruise up I-5 from the Seattle area to Bellingham, Wash., and then back down while clinging to the edge of mountain and sea on scenic Chuckanut Drive, we logged 164 miles. The car arrived home with 33% charge remaining, enough for another 91 miles by the computer’s reckoning. So that’s theoretically a total range of 255 miles, beating the car’s 227-mile EPA rating — pretty good considering most of the trip was at 70-plus mph, and interstate speeds typically do EV range no favors. The miles per kilowatt hour average was 3.0 (from an 83.9 kWh battery).

With that range, we could have driven in one sitting from Seattle to Whistler, B.C., or Cannon Beach on the Oregon coast for a vacation (with luggage). Walla Walla wine country or Coeur d’Alene, Idaho, would be slightly out of reach unless you stopped for a charge — or if you settled for the more sedate i4 eDrive40 with a rating of 301 miles. (The M50’s 20-inch wheels and second motor drastically shrink the official rating.) I did not need to publicly charge the car on this outing, but it’s capable of flowing 200 kilowatts from a 350-kW DC charger. That’s among the fastest in the industry. In Autoblog’s first-drive review of this car, contributor Lawrence Ulrich experienced a quick-and-easy charge.

For a full rundown on the car’s performance, you should check out that review, where Ulrich asks, “Why would anyone want the gasoline version?“ You should also consult our i4 overview and buying guide. Today’s assignment, however, is to simply spend a day in the i4 M50.

That day in a word? Nice.

A one-motor base BMW i4 Gran Coupe has a starting MSRP of $56,985 including its $995 destination charge. Stepping up to the M50 takes the starting price to $66,895. For that money, you get a lot of good things, including the attractive Cognac brown interior with perforated seating. (Like every modern BMW’s seats, these made my butt nostalgic for the Recaros in my first BMW 40 years ago. Why don’t all seats have thigh extenders?) 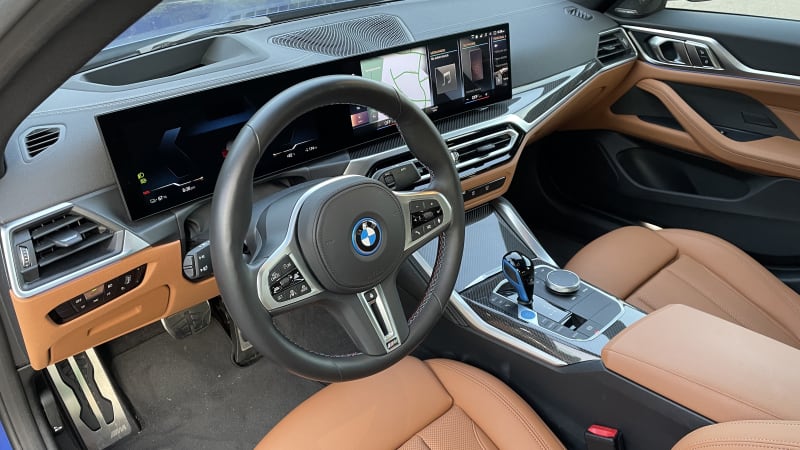 But the car’s second-showiest feature, after its acceleration, is the BMW Curved Display, a $1,000 option that includes HUD and is making its way into other BMW models. This, of course, is two displays made to appear like one: The digital instrument cluster is 12.3 inches, and the infotainment screen is 14.9 inches, all built into a sweepingly horizontal display panel bisected by the right rim of the M sport steering wheel.

A touchscreen is present, but the familiar iDrive controller is a surer, safer way of getting what you want. Response times in general are a bit slow, and the call-and-response of the voice interface is by far your slowest means of command. The AI did seem to understand requests posed in any casual syntax we threw at it. If you invoke the “Hey BMW” watchwords to, say, set the temperature, the car knows it’s the driver or passenger asking and will respond accordingly for that side of the car. (Neat trick, but of course you could also just push the onscreen temperature control, it’s right there, inches from your fingertips.)

Zac and James this summer posted a deep dive of the system, “BMW’s iDrive 8 infotainment system is not very good,” on how slow and menu-laborious everything was, and the degree to which former physical controls are relegated to the menus. All true, though also a common malady. Another common complaint: BMW’s angular gauges are not very readable. At least there’s a big speedo number.

The standard home screen displays the navigation map and widgets for other vehicle functions, a lineup of panels that can be customized. But I tended to keep the map expanded to fill the screen. It looked great blasted across nearly 15 inches of dashboard. The car’s Traffic Jam Assistant lived up to its name when the flow bogged down through Mount Vernon. 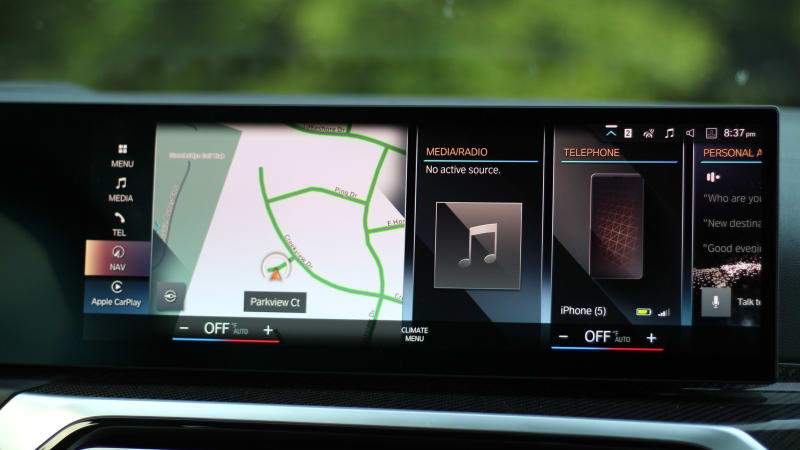 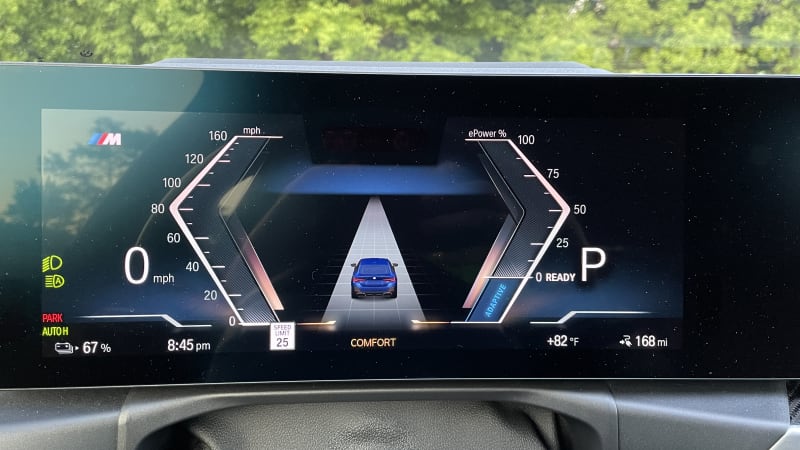 The i4’s adaptive M suspension and low center of gravity made for a pleasant, planted highway cruise. The quiet cabin is a great place for front occupants. Backseat passengers don’t have it quite so good. There’s a big scallop out of the seatbacks to accommodate knees, but a 6-footer sitting behind another 6-footer would find it a little snug.

In case you’re wondering, no, under the new rules, this car currently would not qualify for a federal tax credit, because its final assembly was in Germany. And it doubly won’t qualify after Jan. 1, 2023, when the credit’s $55,000 price cap kicks in,

But even without the tax credit, is there a case to be made for this BMW EV?

Well, look at it this way, since the whole industry is chasing Tesla: The i4 M50 is sized between the Tesla Model 3 and Model S, but it’s probably more comparable to the S in terms of what it’d be like to live with the car, because both are liftbacks. The i4 M50 is equipped similarly to the Model S Dual Motor. The Model S has a higher range rating (375 miles, though it has been coming in well below that rating in real-world testing). The Tesla also claims more horsepower and faster acceleration — though whether you’re doing 0-to-60 in 3.1 seconds or 3.3, the thrill is the same and you’d damn well better hang on. You want faster, seriously?

But the Model S Dual Motor starts at $110,940 including destination and ordering fees — compared to the BMW i4 M50’s starting price of just under $67,000, or this test vehicle optioned up at $77,000. On paper, the BMW might be a lesser car on several counts, but its cost is 60%-70% of the Tesla’s price. It’s also cheaper than the BMW combustion M cars it outruns.

The BMW i4 M50 is a performance value. If this is what BMW can do just by sticking EV innards into an existing internal combustion platform, imagine what else it’s going to come up with.