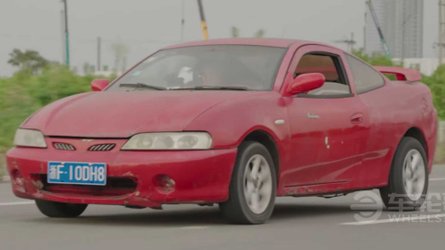 Today, Geely is a major international automaker with brands like Lotus, Polestar, and Volvo under its ownership. In 2005, things were very different, but the automaker still had innovative plans. The Beauty Leopard was available that year, and it was the country’s first, homegrown sports coupe. The China-based YouTube channel Wheelsboy bought one to check out.

On the outside, the Beauty Leopard looks like a mashup of the ’90s era Chevrolet Cavalier Coupe, Opel Calibra, and Toyota Paseo. This combination of styling languages isn’t a bad thing but is hardly an original appearance. Under the hood, there’s either a 1.5- or 1.6-liter Toyota-sourced four-cylinder because the owner isn’t sure about the engine. The power runs to the front wheels through a five-speed manual.

The Beauty Leopard might have been a decent car when new, but this one lived a very hard life. Many plastic parts on the body are broken. The paint is flaking off. The gearshift is as vague as a teenager telling his mom about a night out with his buddies. At least at idle, the engine is running on three cylinders, but the other piston might come to life at high revs, judging by the sound.

The folks from Wheelsboy bought this car for the equivalent of around $800. However, that was before needing to pay for maintenance and towing the coupe to Shanghai. Unfortunately, the authorities there hauled it away, resulting in a fine. The channel paid the price and took the car to a suburb.

Now, this Beauty Leopard is nearly dead. Wood screws are attaching several interior pieces together. Dowels seem to be holding the armrest to the door. The dashboard has red spray paint covering it. At one point, the parking brake even comes off.

According to Wheelsboy, a Beauty Leopard in good condition is very hard to find on the Chinese market today. There is now nostalgia for them, but the few units on the used market aren’t in much better condition than this one.