One of the most awaited models from Mahindra this year was the Scorpio N. Just like Thar and XUV700, Scorpio N also became an instant hit among buyers. The SUV received an overwhelming response from the customers and it has also started arriving at the dealerships. Deliveries for the all-new Scorpio N would start soon. There are off-road and review videos of Mahindra Scorpio N available on the internet. Here we have a video where Mahindra Scorpio N and Tata Harrier are seen competing against each other in a drag race.

The video has been uploaded by Vikram Malik Boxer on his YouTube channel. Vlogger and his friends take the Scorpio N and the Harrier to a closed highway that is currently under construction. Vlogger was initially sitting in Scorpio N and his friend was driving the Harrier. Vlogger mentions that the Harrier owner has never done such races in the past. Both the SUVs line up at the start line and the race starts at the third horn. Harrier driver misses the launch and they had to do the first round again.

Vlogger mentions that for the first round, AC and traction control in switched on in both the SUVs. The first round starts and Scorpio N moves off the line aggressively. The Harrier did not move aggressively and it was left behind. The gap between both the SUVs kept on building and Scorpio N won the first round. Vlogger then asked Harrier driver to come and sit in the Scorpio N while he drives the Harrier for remaining rounds. Vlogger drives the car to the start line and tells Scorpio N driver that he is turning the AC off and is engaging sport mode in Harrier for the second round. The AC & traction control was On in Scorpio N.

The race started and Harrier immediately had an advantage. The SUV was ahead of Scorpio but after few metres, Scorpio N started closing in. It was giving Harrier a very tight competition. Scorpio N driver mentions that he could not launch the SUV properly . For the third round, the settings remained same and in this round, the Harrier was leading initially but as the car touched 100 kmph mark, Scorpio N starting pushing forward and took the lead. The SUV was running with its AC on while it was off in Harrier. 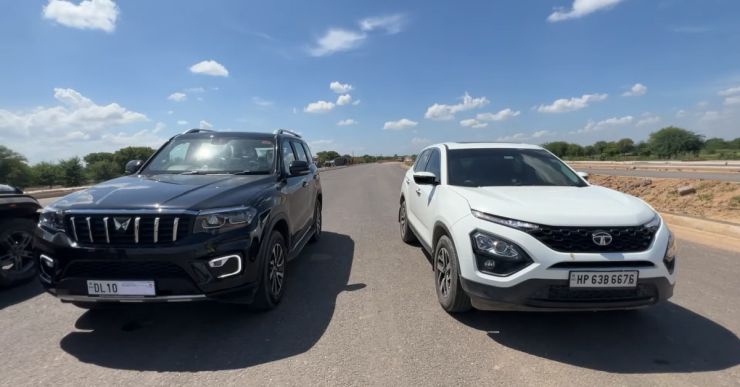 For the last round, Mahindra Scorpio N driver turned the AC off and so did the vlogger who was in the Harrier. Both of them lined up for the race and as soon as the race started, Scorpio N had the upper hand. It immediately took the lead and maintained in throughout the race. Harrier was struggling to overtake Scorpio N but at no point, it could actually do it. Mahindra Scorpio N was announced as the winner in this race. Scorpio N seen here is the 4×4 diesel automatic version. The Harrier is also a top-end diesel automatic variant.

The Harrier is powered by a 2.0 litre turbocharged diesel engine that generates 170 Ps and 350 Nm of peak torque. Scorpio N uses a 2.2 litre turbocharged mHawk diesel engine that generates 172 Bhp and 400 Nm of peak torque. It is slightly more heavier that Harrier but, even that did not help Harrier win the race. This does not mean Harrier is a bad SUV by any means. Both Scorpio N and Harrier have their own advantage and disadvantages.