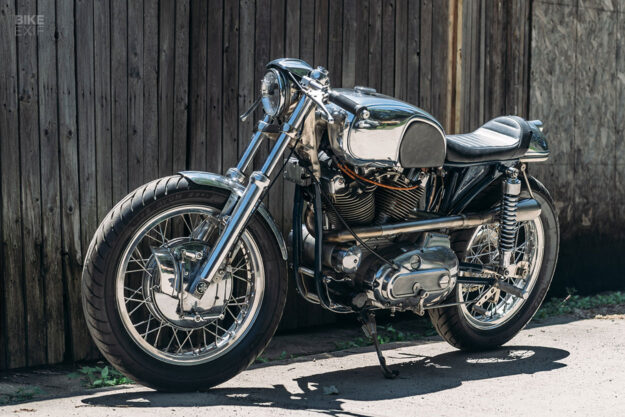 A sleek frame, a mechanical aesthetic, a distinct lack of plastic and a lot of polished metal. This Harley-Davidson Ironhead Sportster café racer must be from Craig Rodsmith. Based just north of Chicago, the Australian ex-pat’s mastery over the dark art of metal shaping is evident in everything he builds.

A few years ago, Craig was approached by a customer, Reto, who liked one of his previous Harley builds so much that he wanted a replica. Craig was understandably hesitant to copy another bike, but he had no qualms taking inspiration from it and fitting it to the new owner. That turned out to be a good decision, because Reto is 6’6”. 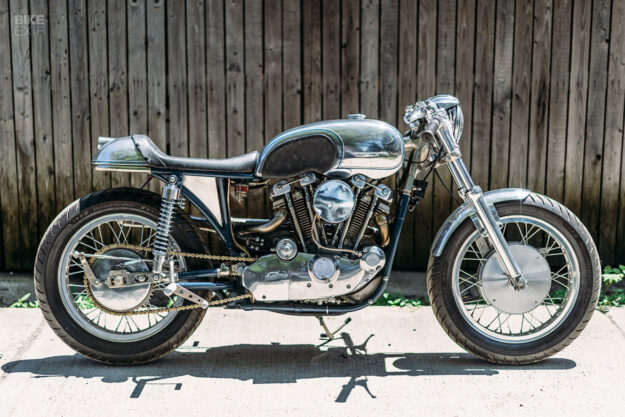 I’m not sure how many Sportster café racers you’ve stood next to, but I can assure you that most of the time, they are rather low-slung. So with Reto’s height in mind, it all kicked off with a 1973 Sportster frame. Once it was rid of all the unnecessary bracketry by care of an angle grinder, the head stem was modified and a new set of 35 mm forks were fitted.

For the wheels, Craig started with the front hub from an old Moto Guzzi and the rear hub from an early Sportster. Then, in typical Rodsmith style, he tweaked the twin-leading front shoe brake, adding a vent to the leading edge. Both hubs were laced with stainless spokes to new 18” Borrani wheels, and wrapped in Avon Roadrunner tires. 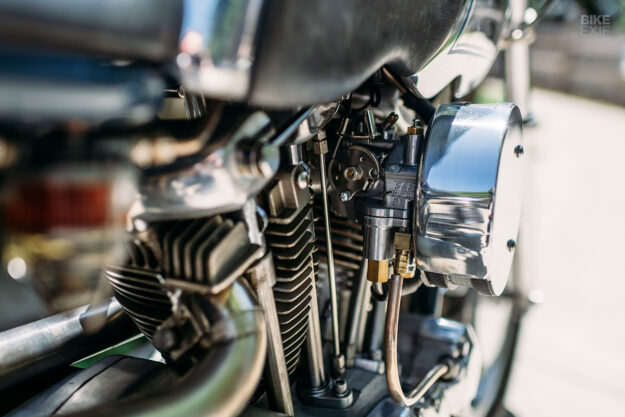 The engine is from a 1979 XLCH Sportster and is relatively stock. It has split rocker boxes and nickel plated cylinders and heads. A Dynatek ignition ensures a strong spark while an S&S Super E carb boosts clean fuel into the freshly rebuilt engine.

Not one to shy away from a bit of noise, Craig built a special exhaust for the Sportster. “I made a stainless steel two-into-one exhaust that exits on left instead of the usual right side,” he says. “I’ve been told it’s one of the sweetest sounding Harleys!” 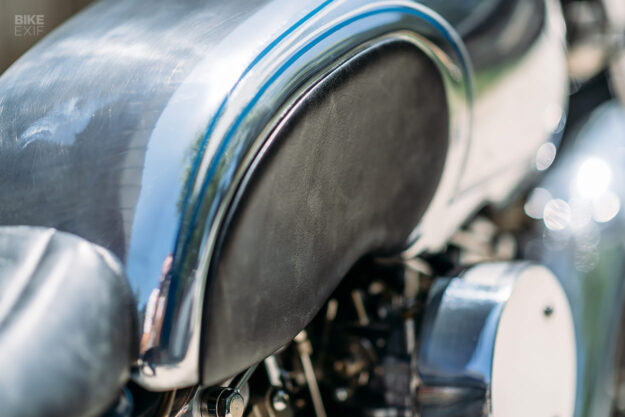 One of the things I love about Rodsmith builds, is that you can instantly tell that everything was made by hand. On this project, Craig fabricated the front fender, fuel tank, seat and rear subframe. The juxtaposition of the polished metal against the charcoal leather tank pads and seat is especially tasteful.

Dane Utech at plzbeseated in Chicago handled the upholstery. The main part of the frame was powder-coated in a dark denim blue, set off perfectly by matching pin striping from Jim Brando, also in Chicago. 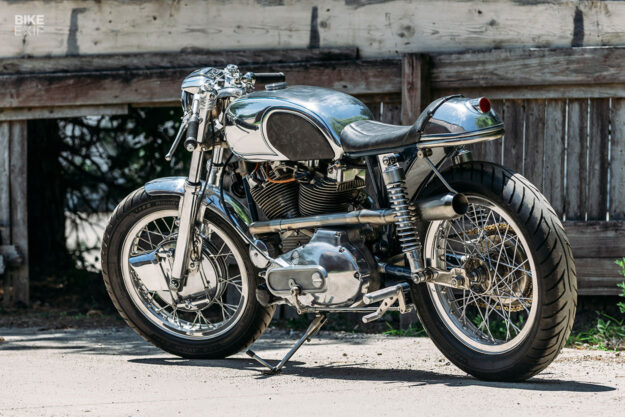 The battery is hidden under the tank while the oil tank is incorporated into the rear subframe, which was nickel plated to match the engine. There’s a new set of rear shocks holding everything up, specced longer than stock to accommodate Reto’s height.

The front end wears clip-ons fitted with new grips, custom buttons and a single bar-end mirror (not pictured). The headlight’s capped off with the Sportster’s distinction shroud, which also hosts a pair of LED warning lights. Out back, the taillight’s been blended into the seat hump. 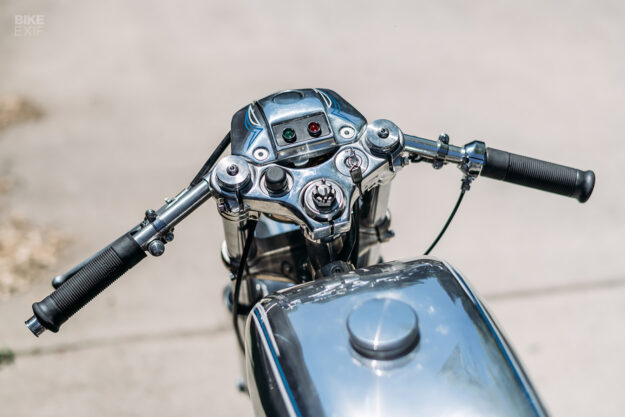 For such a stripped-down cafe racer there really is a lot to take in. You could spend hours poring over every little detail—just like Craig spent hours crafting them.

“Reto turned out to be a great guy,” he says, “as he realized I was also building a few other commissioned bikes for my friend, Bobby Haas, and the Haas Moto museum. So he reassured me he was in no rush.” 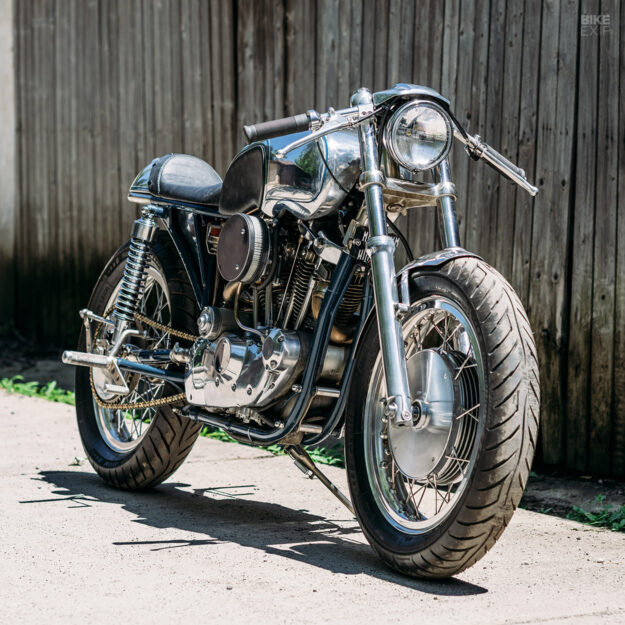 “After I completed my last build for Bobby Haas, I decided it was time to take care of Reto and his Harley. Unfortunately, not long after that, we lost Bobby, which was obviously a bit of a blow to me and slowed down the progress even more.”

“Reto was still very understanding. That being said, I felt he deserved something a little more special—so I went further on this build than we had originally agreed to.” 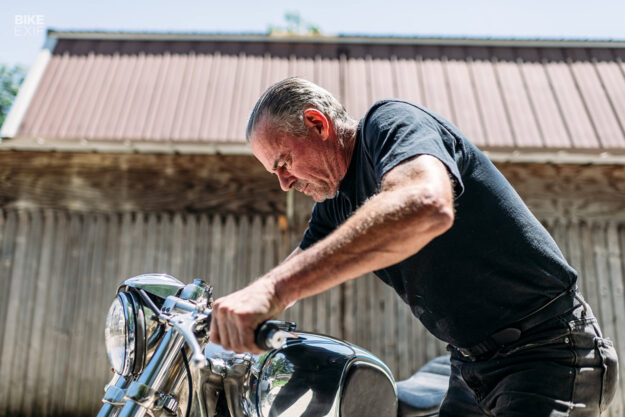 The results of Craig’s commitment speak for themselves. Being able to perfectly maintain classic café racer proportions, all while giving Reto the ergonomics he needed, is further proof that Rodsmith bikes are the work of a true master. 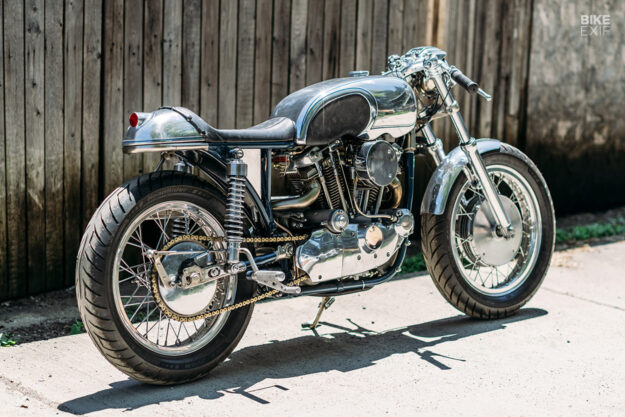