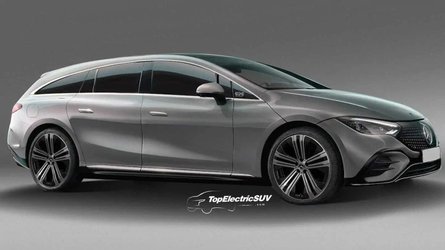 The Mercedes EQE is fundamentally an excellent electric car with great range, a comfortable ride, and all the latest tech. However, many have been critical of its design. Sure, from an efficiency perspective it’s superb (the EQE has a drag coefficient of just 0.22). But aesthetics-wise, the EQE’s bubbly silhouette has often been compared to that of a Honda Civic. The EQE is not a terrible looking car by any means, but we can understand how some might think it looks a bit dull in comparison to a Porsche Taycan, Audi e-tron GT, or Tesla Model S.

That said, a sleeker wagon variant is reportedly in the works. According to German outlet Auto Bild Mercedes is planning an EQE Shooting Brake. The EQE wagon would seemingly slot in between the EQE sedan and the upcoming EQE SUV. TopElectricSUV created the above render to show us what a shooting brake EQE could look like, and we must admit it does seem much more stylish and sleeker than the EQE sedan.

It’s important to note an EQE Shooting Brake has not been confirmed by Mercedes and is nothing more than a rumor for now. An EQE SUV has been confirmed though and will debut in full on October 16.