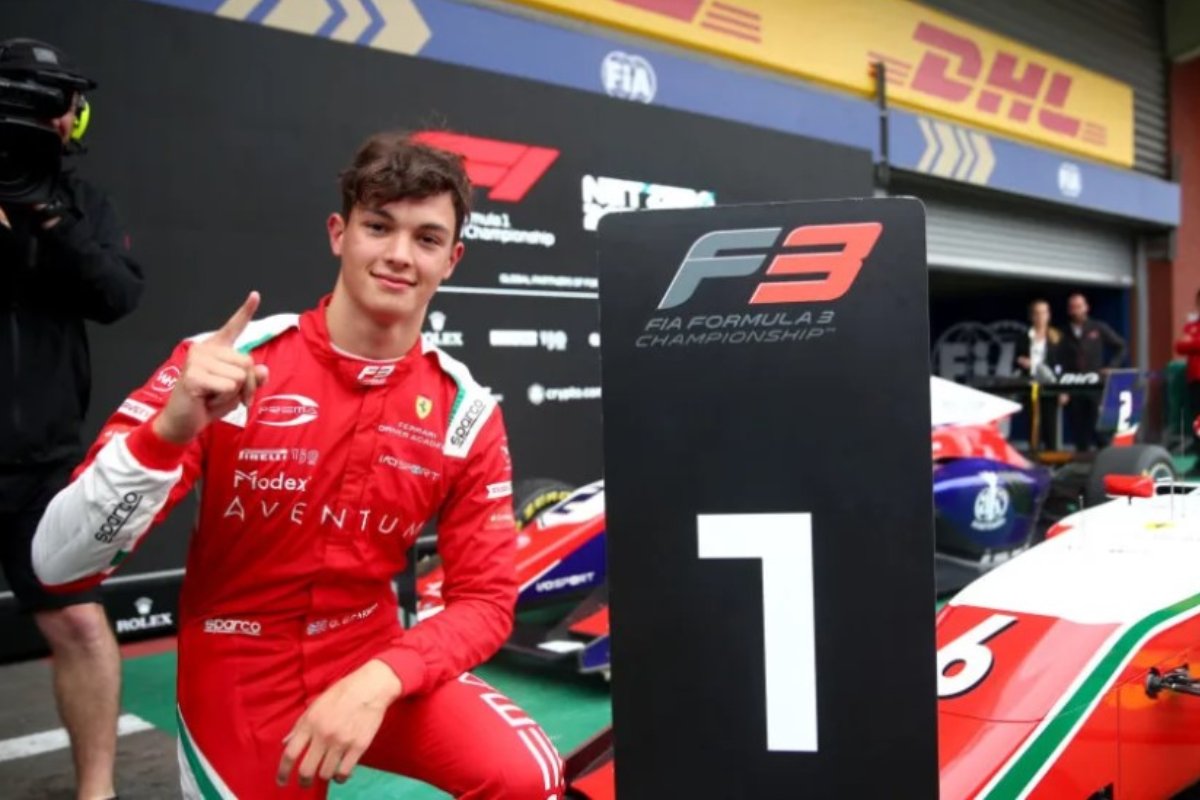 Prema Racing’s Oliver Bearman pushed himself into championship contention as he won his first Formula 3 Sprint Race this weekend in Spa.

The podium was rounded out with Roman Stanek from Trident in second and MP Motorsport’s Alexander Smolyar third after Red Bull junior, Jonny Edgar was handed a five-second penalty.

Edgar was given a five-second penalty for contact in Lap 1 with Van Amersfoort driver, Franco Colapinto. He finished the race in second and collected Fastest Lap but dropped down to fourth after the penalty was applied.

The race was highlighted by a terrifying crash between Zane Maloney and Oliver Goethe on Lap 7, which saw the pair table at the ultra-fast Blanchimont corner.

The impact saw Maloney’s car flip after nosing into the tyre barrier, his car coming to rest right way up.

Both drivers climbed from their cars with the assistance of the medical team, the race was suspended to clear the wreckage before being restarted after a delay to repair the tyre barrier.

At the original race start, Juan Manuel Correa in the ART passed pole-sitter, Zak O’Sullivan through Le Combes but contact between them saw the former collect a puncture and leave O’Sullivan with front wing damage and a five-second penalty for causing a collision.

Brad Benavides was also given a five-second penalty for leaving the track and gaining an advantage during the same lap but this was rescinded during the red flag.

The stewards acknowledged that the Carlin driver did give back the advantage to team-mate O’Sullivan in Lap 1. The Carlin driver finished in eighth after struggling from the Lap 10 restart.

Christian Mansell had a strong start, moving up five places to P20 by Lap 2 but found himself in gravel at Les Combes and consequently retired from the race after contact from the Van Amersfoort driver of Rafael Villagomez.

Villagomez was handed a 10-second penalty from the stewards for causing the collision.

Isack Hadjar inched forward in the championship ladder, collecting two points from his charge to ninth from starting 23rd to move ahead of main rival, Victor Martins. He sits on 106 championship points.

Martins picked up a drive-through penalty for a jump-start which meant he collected no points to remain on 104.

Jak Crawford moved up 19 places after starting at the back of the grid, finishing one place out of the points-paying positions.

His Prema Racing team-mate, Arthur Leclerc finished fifth to collect six points, bringing his total to 101 and moving him to third in the championship.

Sunday’s Feature Race will begin at 16:50 AEST for Formula 3.