Driving becomes a lot more challenging during rainy season. One has to be extremely careful about the road on which they are driving and many roads in India even form potholes overnight due to heavy rains. For all these reasons it is always recommended to drive or ride during rain very slowly to ensure that you and your vehicle reach the destination safely. We have published several articles in the past that talk about aquaplaning and how dangerous can it be. Here we have a dash cam video shows why exactly you should drive carefully during rainy season.

The video has been uploaded by Nirav Thakker on their YouTube channel. In this video which is recorded from the dash camera for another vehicle shows wet road. The car recording the video is being driven on the middle lane of a highway. The road is extremely wet and according to the video, the incident happened before Hubli, Karnataka.  Few seconds after the video starts recording, a Red coloured Ford Figo first generation hatchback can be seen overtaking from the right lane. 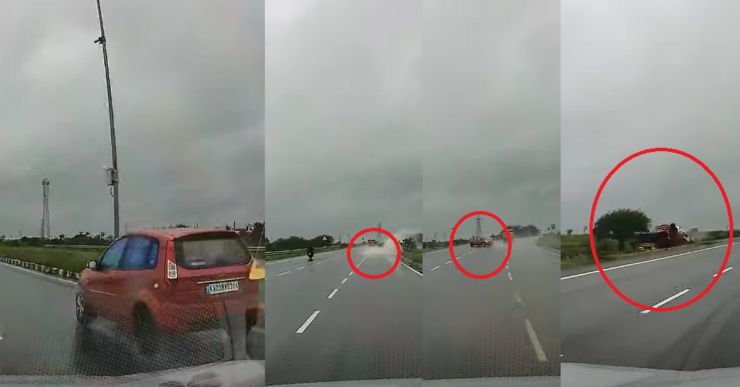 Luckily, no other vehicles were near the Ford Figo. Even the car that recorded the video was maintaining a safe distance from the Ford Figo. This video is a perfect example why one should not drive at high speeds on wet roads. On such surfaces, cars can easily lose control and it can lead to accidents like in this case. This phenomenon is called aquaplaning. It happens when amount a thin layer of water forms between the tyre and the road. When this happens, the tyre which is the only point on contact with the road stops responding to steering feedback and the car loses control.

You don’t have to hit a pool of water to experience aquaplaning. It can  happen on wet roads if you are driving at high speed because the treads on the tyre are not getting enough time to push the water out and maintain the grip. If you ever come across such a situation, the first thing to do is take your foot off the accelerator. As the vehicle slows down, the tyre would once again come in contact with the road and you are regain control. Check the condition of the tyre before rainy season and above all never speed on wet roads. Keep the speed of your car low during rainy season to avoid such situations.