“A big SUV needs a big facelift” is what BMW probably had in mind when it gave the X7 a Life Cycle Impulse for the 2023 model year. The Spartanburg-built fullsize SUV is arriving at more and more dealers across the United States, and BMW of West Houston just took delivery of an xDrive40i without too many boxes ticked on the options list.

The 2023 X7 xDrive40i kicks off at $77,850 and this one has less than $6,000 worth of extras added. It’s a base Luxury trim rather than the M Sport and comes finished in Mineral White Metallic, a no-cost paint. It does have the larger 22-inch wheels with a V-spoke design and a bi-color finish for an additional $1,300. These alloys come equipped with performance runflat tires while some of the other wheels get all-season rubber. 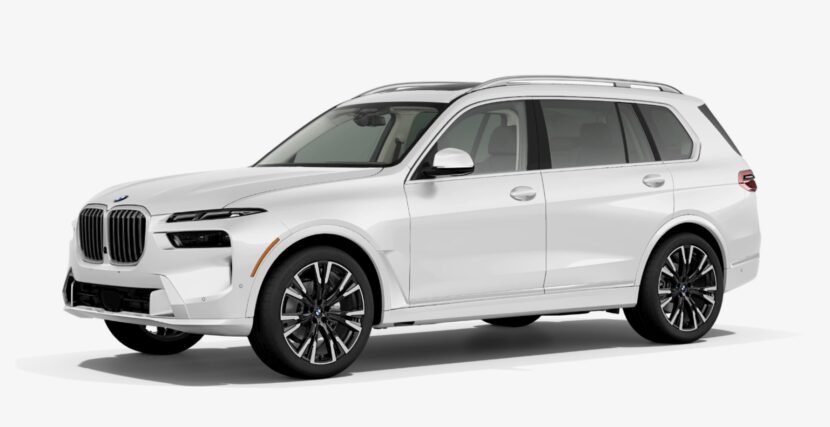 As far as the interior is concerned, it’s pretty basic. Well, as basic as it can be for the most luxurious BMW SUV to date. The X7 xDrive40i has been ordered with the black Sensafin vegan upholstery rather than fancier options such as the Extended/Full Merino Leather. It’s a seven-seater configuration but the Bavarian marque also sells the fancy family hauler with optional second-row captain’s chairs for a six-seat arrangement.

The simplified dashboard no longer has separate controls for the climate settings since these have been integrated into the enlarged touchscreen. On the passenger side of the dash, there’s an illuminated “X7” graphic, which can be replaced by an “M” should you step up to the M Performance model. Slimmer air vents, smaller gear selector, and new driver assistance systems are all part of the changes implemented for the 2023MY.

The X7 remains the most practical BMW ever built and this facelift comes less than four years since the model’s launch. Aside from the polarizing split headlights, other novelties include the iDrive 8 and a new engine for the M Performance version. Bumped from the M50i to the M60i suffix, the sporty variant has the company’s S68 mild-hybrid powertrain we’ll be seeing more of in high-end models, including the forthcoming XM.