We rode out at around 1030 AM, Rich and I taking the shortcut via Hotel Gulch while John and Gary rode a paved route towards a rendevouz point just north of Woodland Park, CO.

Hotel Gulch was nothing I’d take a regular car down, steep slopes with off camber sections that might interfere with a Ural sidecar rig as well.  This was the reason John elected to go via the paved route even though it was a bit longer.

Yagi, my TW200 dual sport, made up once again for my sad lack of skills and we did just fine through the gulch all the way to the rendezvous point!

Then it was dirt county and NF roads for the four of us!  The only flies in the ointment in terms of the ride were two really tough hills which gave John’s Ural some problem until he put 2WD on.  We actually had to push his rig on the second hill since his clutch had overheated.

The second fly was idiots in a short column of ATVs (probably tourists in rentals since the ATVs were all the same).  They didn’t know how to communicate, hogged a spot full of water crossings to “film them crossing water” and just generally typified the annoying amateur ruining the roads.  Oh well.

We made it to Lake George and the decision was made there to forget about making it all the way to Guffey, CO and instead we headed east on US 24 to get gas and then have a late lunch in Divide, CO at McGinty’s.  Pricey food but good. 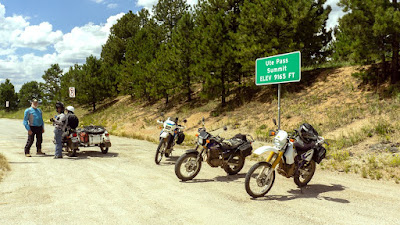 The only photo of the ride, we were moving!

We rested the rest of the afternoon and after dinner with the group it was time to try and catch the sunset.

As the sun neared the horizon, it colored the distant peaks nicely:

The sunset itself was obscured by clouds so no pics there.  Here’s a pic of Revival group (Year 48), sitting by the fire Thursday night: 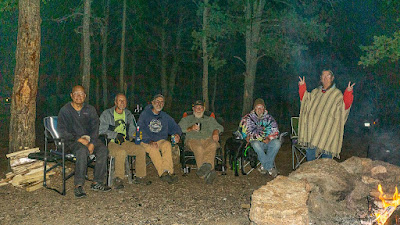 Gary suggested we go look at the “old” RRR or Rampart Range Revival site, called Limbaugh.  I’m told that’s what displays on the maps for the location.  Gary and Jerry went in his Rubicon Jeep and John and I followed behind in the Sammy.

The location is off of FR 322, the road’s entrance is rough enough to dissuade any future use by me for the VRRV!  Still, no issues for either 4×4 and we were soon at the guardrail which the Forest Service put up years ago due to extensive damage in the area caused by campers and day users apparently.

We parked the vehicles and walked perhaps a mile or so and got to the vicinity of the campground.

The main objective of the hike was to show us the old RRR campgrounds but really to showcase the large rock formation which dominated the campsites.  It was this rock formation that was climbed, back in the day, to get a look at distant peaks such as Pikes Peak and to watch the moon rise during the RRR. 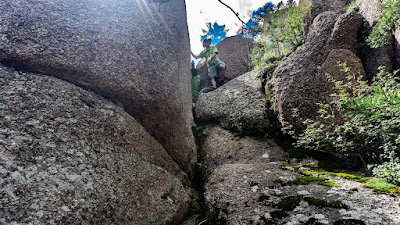 Gary attempting but in the end not able to climb
up the remembered path to the top of the rock formation. 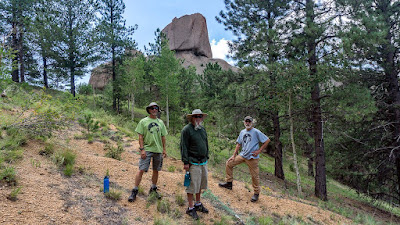 A view of the rock formation 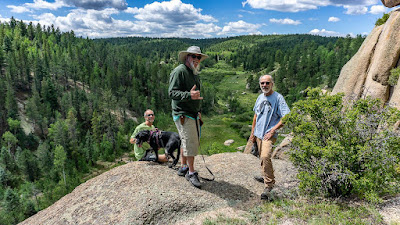 Posing at the flank of the rock formation, the
campground area below 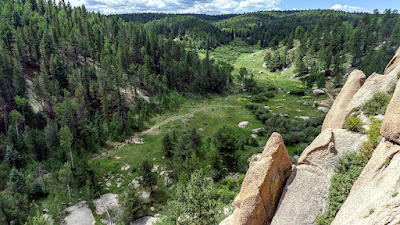 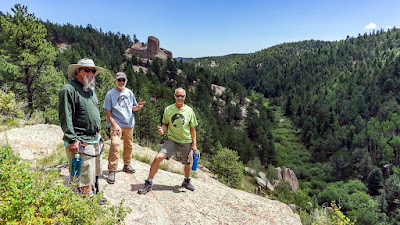 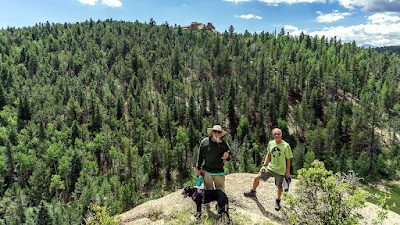 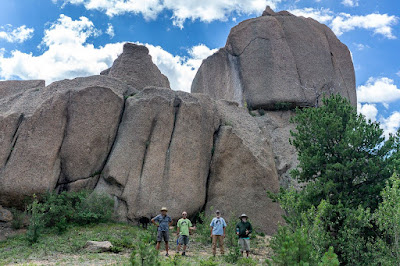 Yep, somehow, you could climb to the highest
point of the rock formation.
On the return trip, Gary in his Jeep issued an informal challenge as he took a steep side detour off of 322, deeply rutted and “interesting” looking.  Of course, the Sammy and I accepted the challenge, I got out and locked the hubs, put her in low gear and 4WD and up we went!  No problem!
In the late afternoon, both John and Gary packed up their gear and headed back home.  It’s only Rich K., Mary and Jerry and myself that remain for the RRR and they’re all departing tomorrow I think.
Dan K., was unable to join us today, he’s having some health issues.  We all wish him well.

Husqvarna Svartpilen And Vitpilen 250 Get New Colors In India