While some mod their car for looks, other do it for performance. And some do it for, we guess, shock value? Or just having some fun, perhaps. Here we have one such Maruti Swift which is probably India’s only Swift to get 22-inch aftermarket alloy wheels. As if the wheels themselves were not enough, the owner of this car takes it off-roading in this video.

The video has been uploaded by AK 5808 on their YouTube channel. What stands out in this car is the wheels. The Maruti Swift is modified with massive 22-inch alloy wheels with a very unique looking dual-tone design. It surely is eye-catching, but perhaps not to everyone’s tastes.

In the video, the driver seems to be driving it through some  very muddy terrain. The Maruti Swift, as we all know, is a front wheel drive hatchback. The owner drives the car through slush and the small hatchback smoothly drives through it. The front wheels are spinning freely as there is very little traction.

Somehow the hatchback manages to drive through the slush without getting stuck. Another modified Swift can be seen in the background but, it is parked on a solid surface. What we think worked in favour of the driver are the massive wheels and wide tyres that come in contact with the surface offering more grip than usual tyres.

Now, please do not try this at home. Neither the offroading in a front wheel drive car, nor the 22 inch tyres. Such things are best attempted for fun, and with the full knowledge that these are risky things to do and can damage the car. Not for most of us. 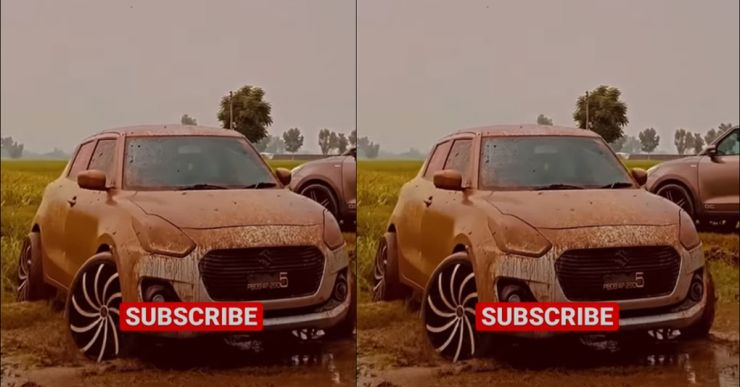 How would this Maruti Swift drive on the road?

These massive wheels would have completely changed the way Swift handles and also the ride quality would have taken a toll. The driver can’t even drive the car on roads at high speeds and the low profile tyre and the large alloy wheel would not absorb even the smallest pothole on the road. There are even chances that the car alloy wheel might even break at high speeds and there are incidents reported in the past that prove the same. This is definitely a good looking car but can you use this as an everyday car, the answer is no. Next is the off-roading part. Taking a front wheel drive car off-road will not be a great idea as the power from the engine is only sent to the front wheels and if the car gets stuck at any point, it can’t come out on its own. In an 4×4 or an AWD vehicle, the power is sent to all the wheels and even if one of the wheels get stuck, the other ones can work and help bring the car out.

Maruti Suzuki Swift is one of the most popular hatchbacks in the modification circle. We have seen several examples of tastefully modified Maruti Swift hatchbacks from different parts of the country. Swift is probably one of those cars is India which is fun to drive and has a very fuel efficient engine as well. We have featured several types of modified Maruti Swift on our website.