In the round-up: Kimi Raikkonen acquainted himself with a NASCAR Next Gen car at the Virginia International Raceway yesterday ahead of making his Cup series debut at Watkins Glen next weekend.

Kimi Raikkonen acquainted himself with a NASCAR Next Gen car at the Virginia International Raceway yesterday ahead of making his Cup series debut at Watkins Glen next weekend.

The 2007 Formula 1 world champion will race with Trackhouse Racing in the Cup Series race at Watkins Glen next weekend, his first entry in NASCAR’s premier division. Raikkonen has competed in NASCAR’s truck and grand national series during his two year hiatus away from Formula 1 across 2010 and 2011.

Raikkonen will also be racing against former F1 driver Danill Kvyat and Le Mans 24 Hour winner Mike Rockenfeller, who will also be making their NASCAR debuts in the race. 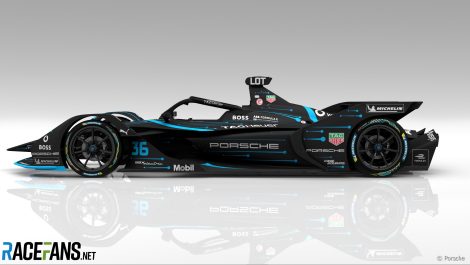 The Porsche Formula E Team will run a special livery for the season finale rounds at Seoul in South Korea this weekend.

Both Pascal Wehrlein and Andre Lotterer will run in a black livery with blue highlights during the double-header season finale in Seoul, to celebrate the first EPrix held in South Korea and help promote the launch of a new Tag Heuer watch.

Porsche currently sit in sixth position in the Formula E teams’ championship on 128 points, with Wehrlein in tenth and Lotterer 11th in the drivers’ standings. Stoffel Vandoorne heads into the final two races of the championship holding a 36 point lead over Mitch Evans.

“Join Guy Austin, Project Manager, for the latest update on our all-new HQ. From manufacturing to engineering and even a sneak peek at the wind tunnel site, discover the layout of our new campus. “

F1’s new ‘flexi floor’ rules could mean trouble for Red Bull and Ferrari, and wins for Mercedes (i News)

“The Belgian Grand Prix marks the introduction of F1’s latest acronym, AOM, or Aerodynamic Oscillation Metric. This is a measure brought in on safety grounds to curb the impact of porpoising following the return this season to ground-effect aerodynamics. The metric sets a minimum ride height, which together with tighter controls introduced to curb flexing floors is expected to eat into the advantage of the season’s dominant teams. “

“For myself and my driving and so on, I’m happy. Some good highlights, I don’t know how I got a podium in Imola, it just blows my mind. With the car that we have that’s quite some achievement so still makes me smile now, but then there are still a lot of positives.”

“As an inaugural recipient of a charitable grant from Ignite Partnership, a joint charitable initiative between Sir Lewis Hamilton and the Mercedes-AMG PETRONAS F1 Team, Motorsport UK is looking to take learnings and knowledge from the running of Girls on Track UK to expand its impact and to develop a programme to increase motorsport participation and involvement of Black, Asian, individuals from other minority ethnic groups and economically disadvantaged backgrounds under the age of 24.”

“He hasn’t spoken to us and we haven’t spoken to him – we want to see what’s happening. This Aston Martin thing happened very quickly and so nobody had time to really think about it, but there were rumours he could replace Vettel, but that went away pretty quick. We didn’t look at what other people were doing.”

“Luckily, I’ve had the opportunity to be able to have a little bit of experience. It definitely helped {having some time in an F1 car} rather than none, however, there’d still be a lot of learning, a lot of in-depth study to be able to make sure I was up to par with what would be needed to do that.”

“It’s RB Leipzig’s first home game in the Bundesliga this weekend! Are you ready to take a tandem trip around Leipzig with David Coulthard and Emil Forsberg?”

“Scott stat down to watch a video from his friends, family and teammates congratulating him on his historic racing career.”

“Using a save that’s been played into the 2030 season, we look at how F1 Manager 2022 dynamically evolves to stay challenging and fun season after season, including regulation changes, driver line-up changes, grid order shake-ups, and more.”

“The second FIA Motorsport Games hotlap event on Assetto Corsa Competizione is ongoing at circuit Paul Ricard. Are you signed up?”

We always endeavour to credit original sources. If you have a tip for a link relating to single-seater motorsport to feature in the next RaceFans round-up please send it in via the contact form.

On this day in motorsport