A half-century has passed since the first Z-Series model arrived. The original Datsun 240Z was in direct response to the Toyota 2000GT and other performance models of that day.

Over the years, the model changed, and the nameplate is now Nissan. For 2023, a new Nissan Z model arrives, a two-seat masterpiece and fitting tribute to a beloved model line.

The 2023 Nissan Z launches a new generation and is the first model in this series without a numerical designation. Each previous model utilized a three-number designation ahead of the Z lettering, representing the size of the six-cylinder engine that has always powered this model.

For example, the most recent 370Z model comes with a 3.7-liter V6. The new model has a twin-turbocharged 3.0-liter V6 and is the most powerful engine ever utilized for this sports car.

Paint and dealer-installed upgrades are the only options available. Customers can choose a manual or automatic transmission with no price premium. 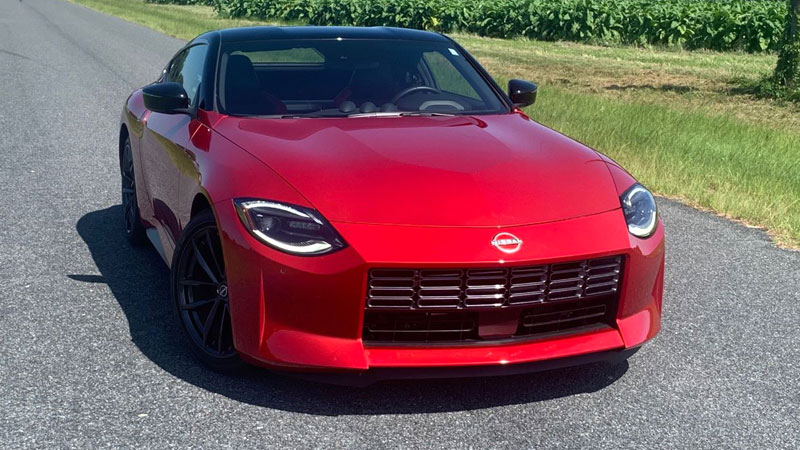 Nissan’s designers and engineers had their work cut out for them when imagining a new Z. The latest model builds on the platform of the previous generation, but features suspension upgrades, a new powertrain, a fresh body, and an overhauled interior.

The silhouette carefully aligns with previous Z models. The bodily changes, though, include a gaping grille, LED lighting, and modern wheels.

The Z’s long hood is all sports car as it flows to the raked windshield. The roofline falls continuously from the front pillar to the rear with haunches forming the back end.

If the rear fascia looks familiar, you’re not alone. It is a modern interpretation of the look found in the 300ZX, but Nissan pulls it off just the same.

Standard 18-inch wheels with the Sport give way to 19-inch wheels in the Performance model. The latter also gains a rear spoiler, suspension upgrades, beefier brakes, and a limited-slip differential. 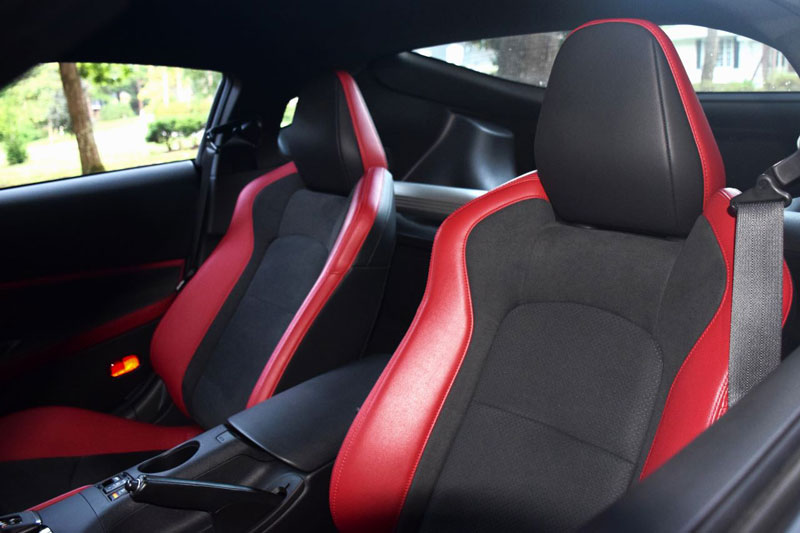 Some sports cars are super tight, but the Nissan Z is not. Comfortable sports seats support the passengers with sufficient bolstering supplied. The cabin is driver-centric with all controls canted or within easy reach.

Nissan did not stray far from its heritage here. Lots of traditional dials control the HVAC system with rounded vents in abundance. But the center console is modern with its display, cell phone pocket, drink holders, and covered storage compartment.

Cloth upholstery in the Sport trim is swapped out for leather in the Performance model. Suede elements, metal, and ample soft-touch materials sweep through the cabin. The design is pleasing to the eye and the fit and finish align with the best in the industry. 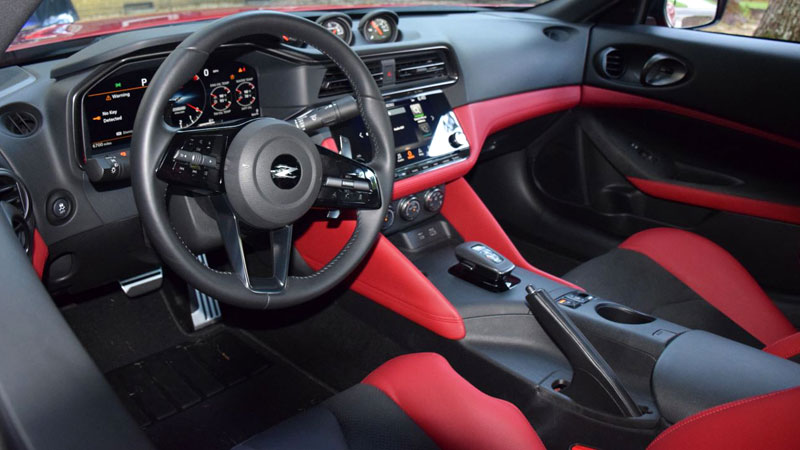 One of the sore spots for the previous 370Z was its dated in-cabin technologies. Happily, Nissan rectified those shortcomings with the new model.

As expected, there are some differences between grades in what’s offered. For instance, the Sport model comes with an 8-inch touchscreen display and a 6-speaker Nissan audio system. The Performance model has a 9-inch screen and an 8-speaker Bose audio system.

We’re fans of the digital instrument panel, a 12.3-inch display with three settings. The panel offers crisp readouts and is easy to read in bright and nighttime conditions.

But if you’re a fan of traditional readouts, take heart: the three analog dials traditionally fixed to the dashboard above the center console carry forward. Nissan found a fitting balance between heritage and modern here.

You won’t find a Nissan Z put through the crash-testing paces offered by the NHTSA and IIHS. The Z is a low-volume model and such testing is typically reserved for mainstream and some luxury models. Nevertheless, Nissan equips the Z with a host of safety features.

The only feature not available that we think would be helpful is a head-up display. 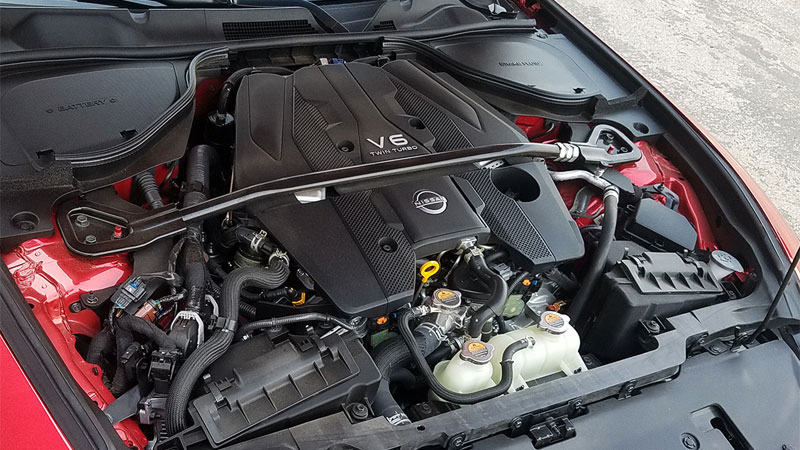 Under the hood of every Nissan Z is a 3.0-liter twin-turbocharged V6 engine with 400 horsepower and 350 pound-feet of torque. The engine is new to Nissan, but in recent years has powered the Infiniti Q50 sedan and Q60 sports coupe.

Customers have a choice of either a 6-speed manual or a 9-speed automatic transmission routing power to the rear wheels. The automatic comes with steering wheel-mounted paddle shifters for drivers wanting a more engaging driving experience. Our test model came with an automatic. 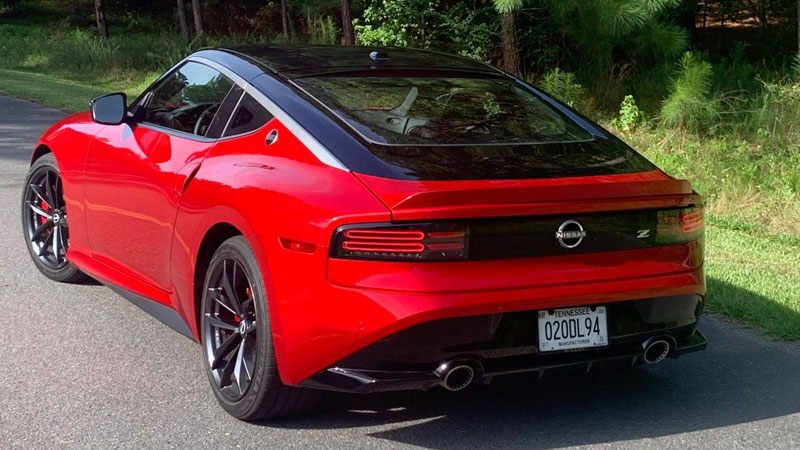 If you’re looking for driving excitement, the Nissan Z does not disappoint. We’re thrilled that Nissan still offers a manual gearbox, although the take rate may be uncommonly low. Nissan wanted to make a statement with its latest Z iteration, which is a resounding wow!

Although our test model came with the 9-speed automatic, we immediately swallowed our disappointment to enjoy it all. Decent forward sight lines had us prepared while shifting into gear.

Without delay, the Z pushes forward with authority. Under hard acceleration, the turbos spool almost simultaneously, with a slight pause just when lag might be detected. The Z is quick on its feet with grippy tires screeching and a compliant transmission shifting rapidly.

Motor Trend estimates a 0-60 mph time of 4.3 seconds and that seems correct. But the true test of any performance model is how it performs at highway speeds.

Here, we floored the Z and it responded immediately with a ferocious roar while moving from 60 to 80 mph with ease. Lift your foot off the gas pedal and the exhaust booms as the speed ebbs.

We like the weighted steering and the capable handling of this sports car supplies. Hanging the twisty roads and navigating corners demonstrate this model’s performance acumen.

The limited-slip differential, though, seems necessary for spirited driving, therefore the Performance grade has our vote. If there is any shortcoming with the Z, an enhanced damping system is it.

The closest competitor to the Nissan Z is the Toyota GR Supra. The Supra gains a manual gearbox for its optional six-cylinder engine this year, but it also comes with a turbocharged four-cylinder engine with an automatic only.

Beyond the Supra, there are several low-cost models to consider, including the Mazda MX-5 Miata, Toyota GR86, and the Subaru BRZ. The Chevrolet Corvette and BMW M2 are also worth comparing.

Finally, a trio of domestic models in the Ford Mustang, Dodge Challenger, and Chevrolet Camaro gets a nod.

After a two-year hiatus, the Nissan Z is back and costs $10,000 more than the previous base model. This time, though, there is no convertible option available.

A NISMO variant has not been mentioned, but one seems likely. With the GT-R quietly disappearing last year, the Z remains the lone performance car in Nissan’s burgeoning arsenal.

Matt has maintained his love for cars ever since his father taught him kicking tires can be one way to uncover a problem with a vehicle’s suspension system. He since moved on to learn a few things about coefficient of drag, G-forces, toe-heel shifting, and how to work the crazy infotainment system in some random weekly driver. Matt is a member of the Washington Automotive Press Association and is a contributor to various print and online media sources.