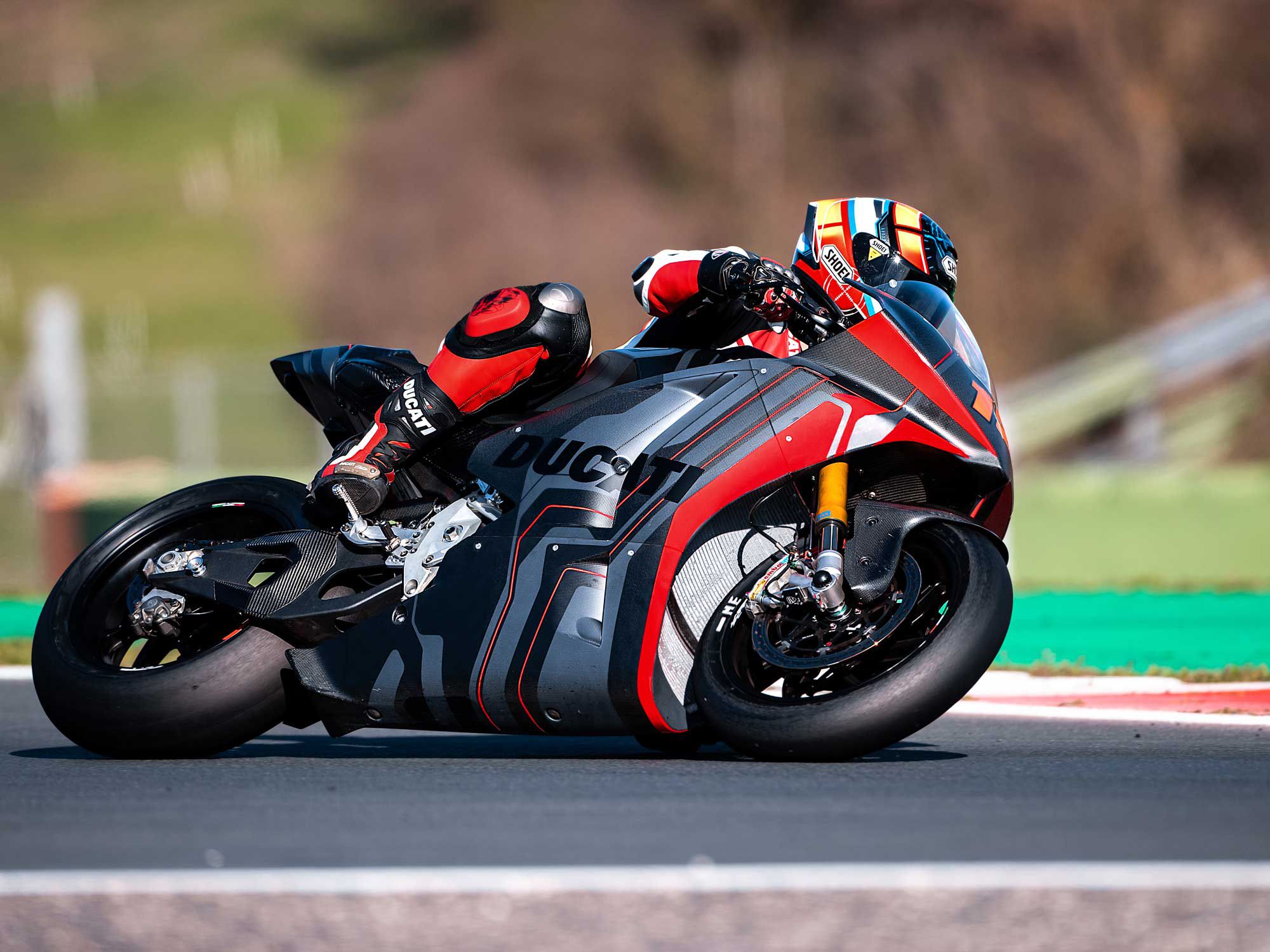 The new MotoE machine, the V21L, looks to be everything Ducati promised it would be: a legitimate racebike. (Ducati/)

In October of 2021, Dorna CEO Carmelo Ezpeleta and Ducati CEO Claudio Domenicali issued a joint statement announcing that from 2023 through 2026 Ducati would supply all the racebikes competing in the FIM MotoE World Cup. Previously, Energica had provided the bikes; the move to Ducati was a clear attempt to revitalize MotoE events, advance the technology, and give MotoE a much stronger image.

Now we know more. Ducati has unveiled the V21L, its prototype MotoE racer, and the Borgo Panigale company shows every sign of taking the challenge seriously. The new bike marks a sharp evolution in technology, but more importantly, the V21L demonstrates genuine racing competence. This is a welcome development, though perhaps not surprising, as the bike was jointly developed by Ducati R&D and Ducati Corse. The prototype is much lighter than the previous Energica racers and features a much more sophisticated design along with the promise of superior performance. 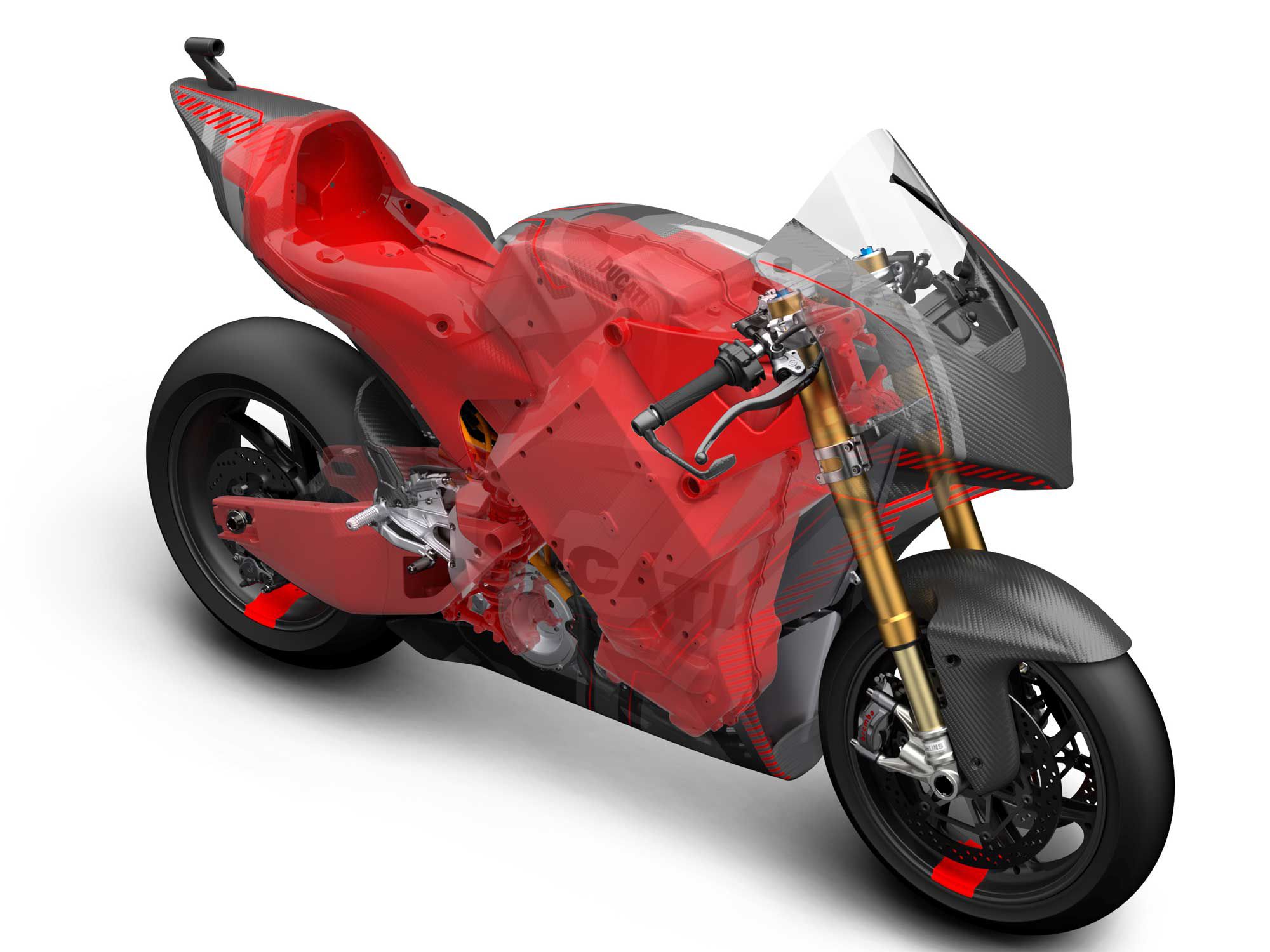 The V21L’s motor and inverter, highlighted in red. Note the chin radiator and cooling lines. Larger upper radiator (not highlighted here) is for the battery pack. (Ducati/)

When Ducati’s technical team got to work on the new project, they already had a head start. Ducati’s parent company is the automotive manufacturer Audi, who has a great deal of expertise and experience in this area. The cooperation with Audi R&D is most evident in the propulsion package. The battery pack consists of 1152 cells with a capacity of 18kWh at 800 volts. The high voltage might raise an eyebrow, but it’s mandatory to obtain maximum energy density. While the very high voltage allows top performance, it also puts great demands on the lithium-ion batteries. Anyone who thinks of ebikes as around-town scooters needs to check out the V21L. (Ducati/)

To reduce the risk of battery explosions, a sophisticated liquid-cooling system has been developed. Thanks to this system, the battery pack can be recharged with no need to wait for it to cool. A 20kW socket is integrated into the seat’s tailsection.

The motor delivers 110 kilowatts of peak power and 103 lb.-ft. of peak torque, weighs only 46 pounds, and spins up to an impressive 18,000 rpm. A compact inverter weighs just 11 pounds, and like the battery pack, the motor uses a high-efficiency liquid-cooling system. 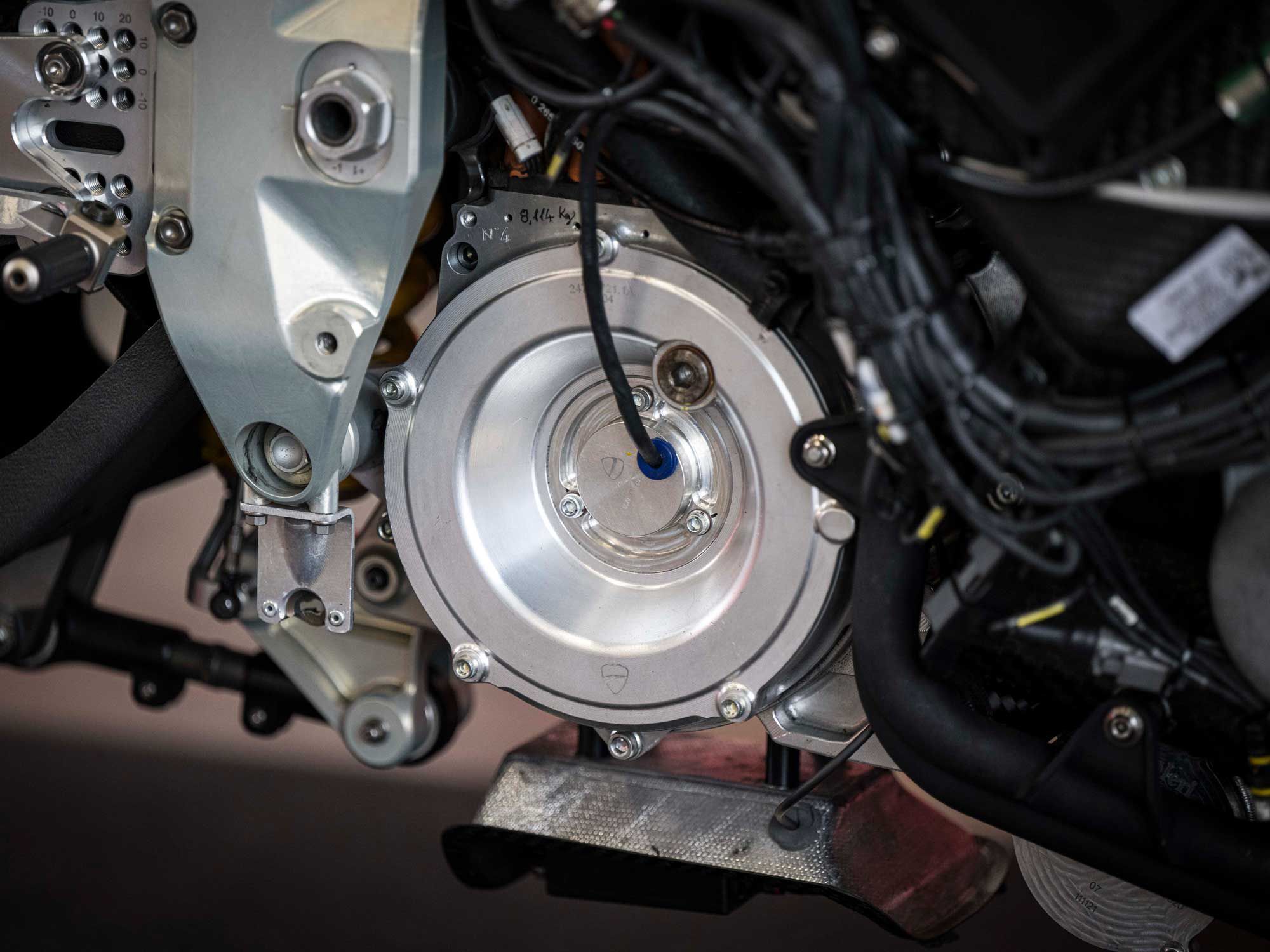 Not a desmo twin, but still worth a look: The bike’s motor sits very low in the structure. Note the multi-adjustable rearset mounts; not only is this a prototype machine, but MotoE riders will need to tailor the riding position to each racer’s preferences. (Ducati/)

The battery pack/propulsion system sits at the center of a compact but very strong chassis. Ducati’s MotoGP experience is evident here: The chassis structure uses the carbon fiber battery-pack box as a main stressed member, and a pyramidal aluminum construction connects the energy-storage components to the steering head. The unit only weighs 8 pounds. The aluminum swingarm has a unique braced double-arm design and weighs 10.5 pounds.

The whole project shows an obsession with weight containment, and this helps make the V21L a real racer in the best Ducati Corse tradition. For example, the seat and tail structure are all carbon fiber, and consequently Ducati claims the bike doesn’t need any supporting subframe for these components. Despite the battery pack’s 242-pound weight, the whole V21L only weighs 496 pounds, a record in the class and 26.5 pounds less than the minimum weight specified by FIM for the MotoE racers. 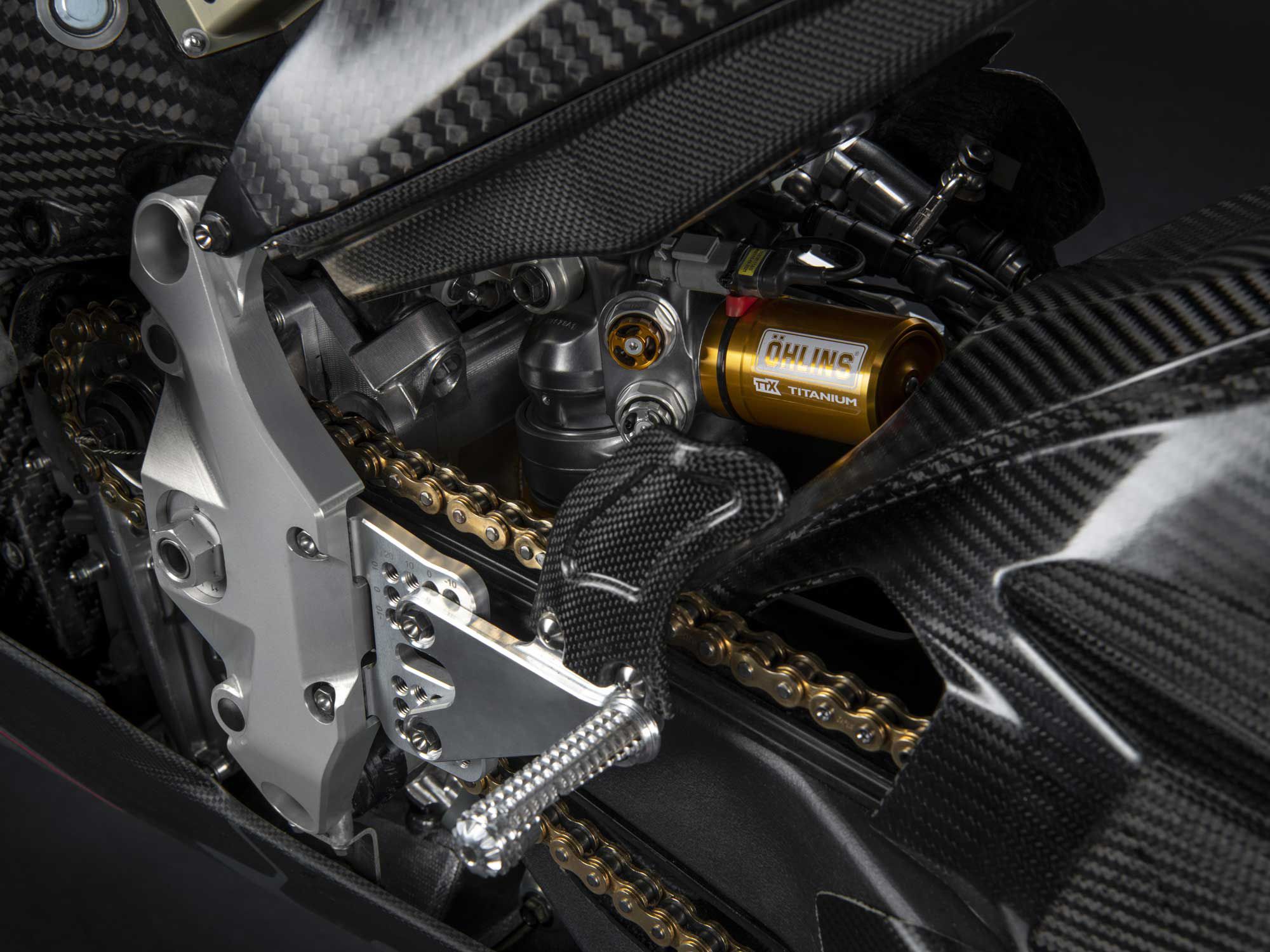 Suspension components are top drawer: A 43mm Öhlins NPX 25/30 gas-charged fork and TTX 36 gas-charged shock. But the brakes are the real attention grabbers. Since the electric motor offers only minimal “compression braking,” Brembo has developed a very special front brake for the V21L. The twin rotors are 338.5mm in diameter, but extra thick: Brembo offers a choice of either 6.8mm or 7.4mm. Why so beefy? They feature a layer of cooling fins between the outer surfaces to ensure better heat dispersion. The rotors are teamed with Brembo’s GP4-RR M32 32/36 four-piston monoblock calipers. 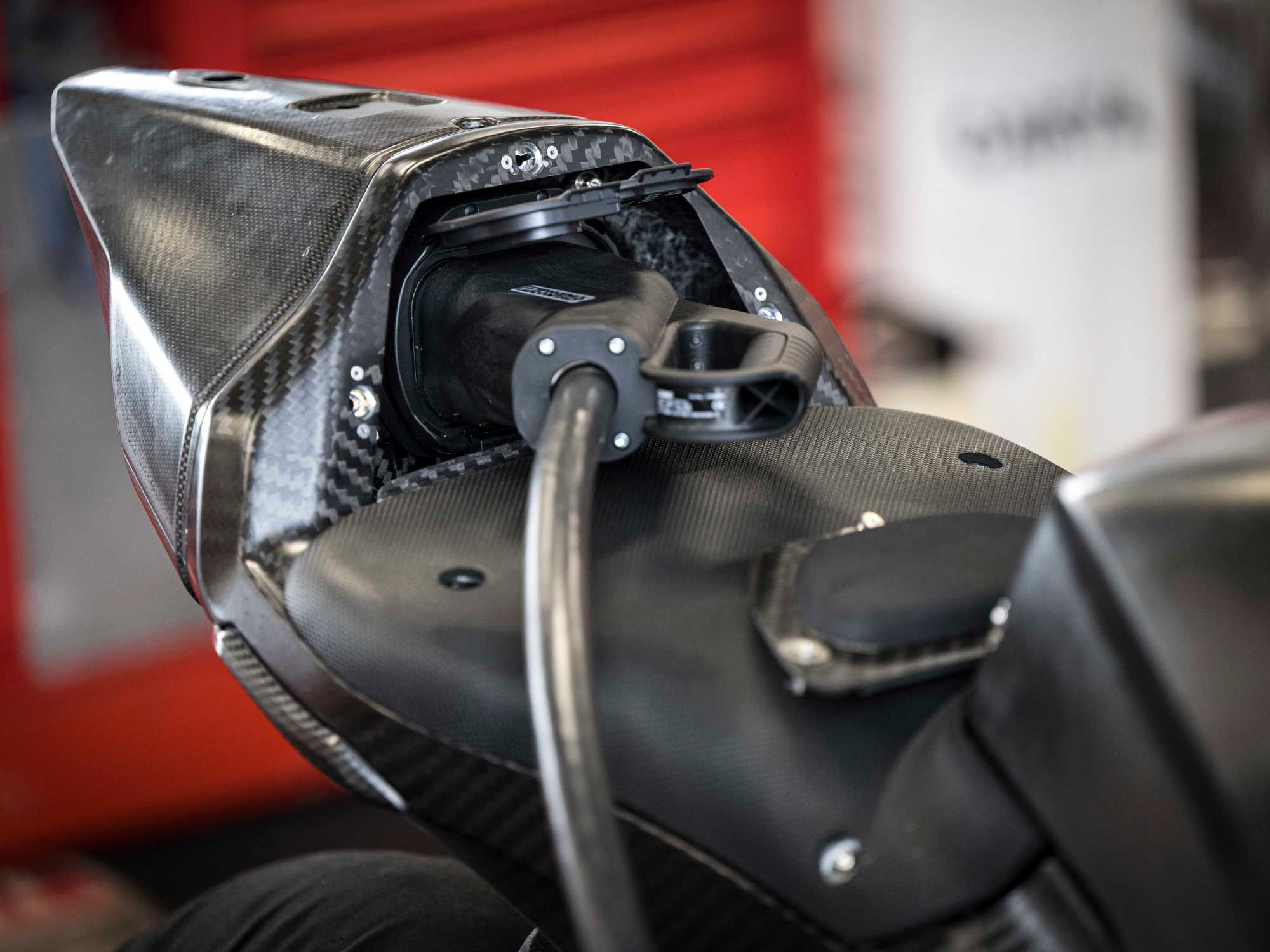 Fill ‘er up! A 20kW connection is located in the bike’s tailsection. The battery pack is a remarkable 800 volts. (Ducati/)

The V21L is equipped with an electronics suite that includes traction control, slide control, wheelie control, and throttle/engine response control. Except for the 58-inch wheelbase, Ducati hasn’t divulged much about the chassis geometry. At present, the electric Duc is undergoing extensive track tests; even Claudio Domenicali has taken a spin on it. 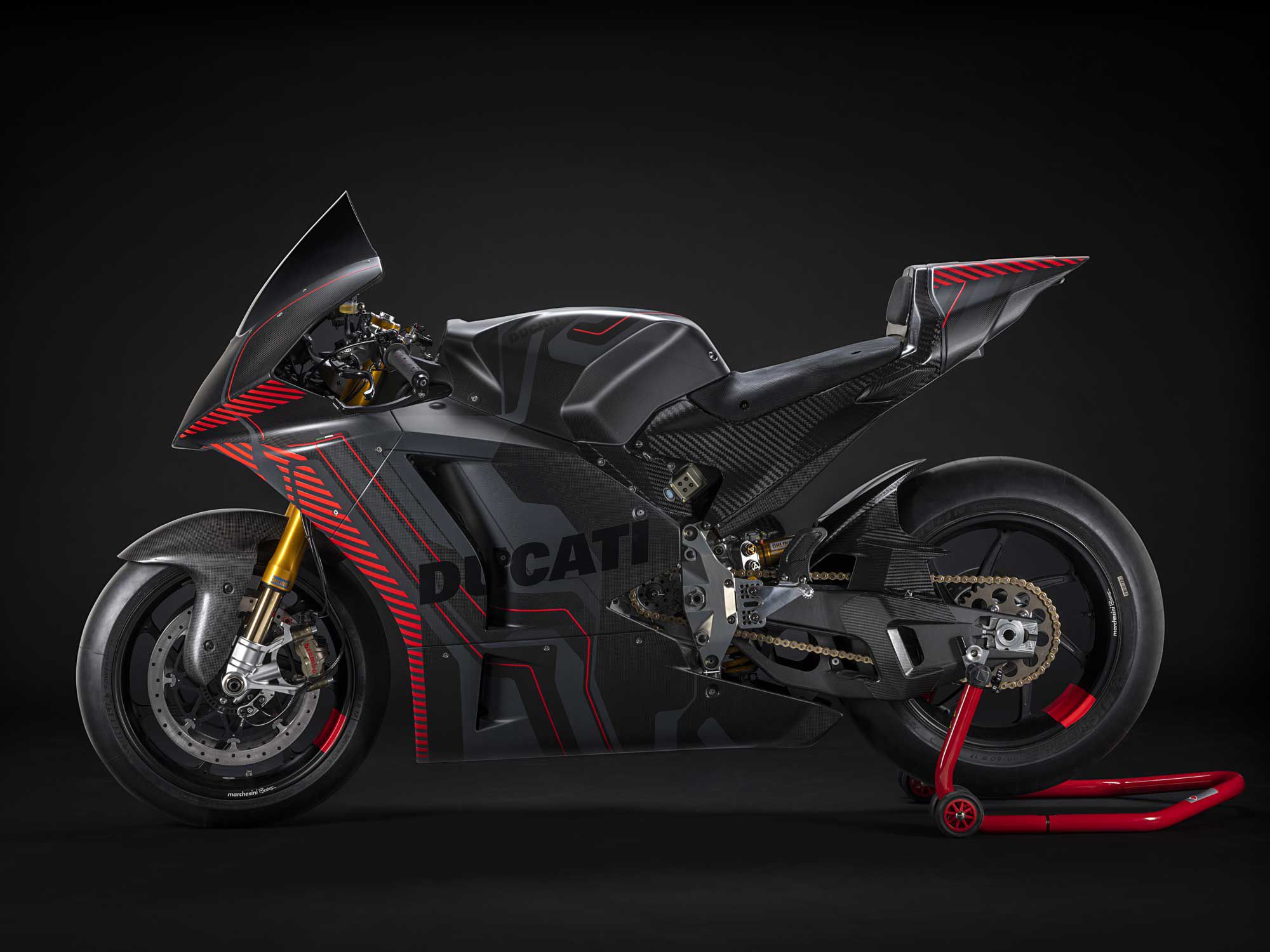 Garcia does the double in Hungary | Ruprecht suffers mechanical issue