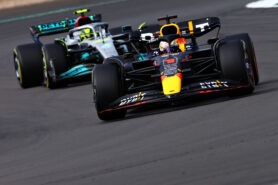 The weather and track had dried out the start of the second practice for the British F1 Grand Prix. The cars were fitted wit a lot of updates this weekend.

Max Verstappen told his team his car was making strange noise when he started his first timed lap in the Red Bull RB17. He used a set of medium tyres for his first lap and clocked a time of 1:31.438. The Dutchman was 0.652s slower than both Ferraris. Charles Leclerc already topped the timesheet with a 1:30.786 min in the Ferrari, while his teammate Carlos Sainz was second.

After ten minutes Leclerc still was on P1 and had improved the quickest lap time to 1:29.639 min. His teammate was still behind him on 0.323s. The championship leader Verstappen was a long way back on 0.849s on P3. Sergio Pérez was 4th (+1.196) in the other Red Bull, while Lewis Hamilton was 5th on +1.253s. Fernando Alonso was 6th on +1.496. Slowest was Williams driver Nicholas Latifi looking at a huge gap of 3.662s behind Leclerc. All carrs were fitted with medium tyres.

After fifteen minutes of practice Hamilton told his Mercedes team on the radio the W13 was bouncing a lot on high speed. Verstappen had improved to P2 on 0.423s from Leclerc.

Alex Albon drove around in a very changed Williams, which seemed to work very well as he was over a second quicker than his teammate Latifi halfway the session. At this moment we saw McLaren driver Lando Norris go fastest on a set of soft tyres with a 1:29.118 min, which must be very encouraging for the British driver at his home GP.

Esteban Ocon lost some lap time when the team had to repair a cracked side-pod on the Alpine.

Sebastian Vettel had to a damaged floor and had to pushed back in to the Aston Martin garage for some needed repairs. Vettel said he did not go of the track and the team acknowledged his comment.