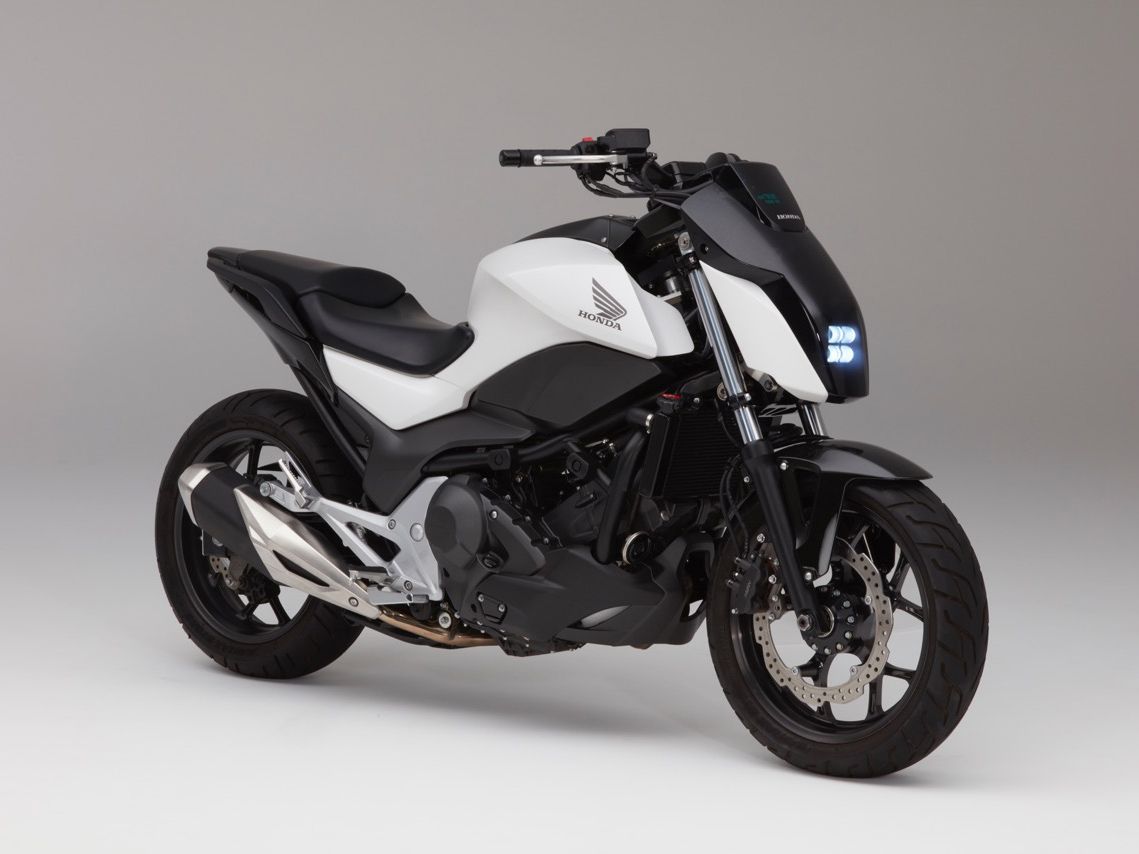 Back in 2017, Honda showed this bike equipped with its Riding Assist Technology at the Consumer Electronics Show in Las Vegas. It was an early prototype showing its ability to self-balance. (Honda/)

The idea of a motorcycle-autopilot system might be anathema to many, but the same technology that allows an increasing number of modern cars to steer, accelerate, and brake automatically is clearly heading to two wheels in the future.

Most of us ride for pleasure, so a self-riding bike initially sounds as appealing as a steak that eats itself, to save you the trouble. But it’s hard to argue that hours of straight-line riding on a freeway can provide as much joy as a few minutes on a twisting back road. What’s more, as modern car safety systems prove, tech that can provide semi-autonomous driving can also step in to prevent or mitigate accidents. The fact that Honda—a pioneer of such systems on four wheels—is working to bring them to motorcycling is a logical progression.

Honda might be lagging behind BMW, Ducati, KTM, and Kawasaki at the moment, when it comes to fitting radar-assisted adaptive cruise control and warning systems to bikes, but that’s likely to be a result of the firm’s tradition of developing technology in-house rather than adopting existing, off-the-shelf technology. Over the last couple of years, Honda has left a paper trail of patent applications that illustrate just how seriously it’s taking semi-autonomous riding, and now another such document has been published that shows how a host of individual systems can be integrated to work together in a seamless safety system.

We’ve already seen patents showing that Honda is developing radar systems, likely to appear on models like the Gold Wing and Africa Twin initially. While the company’s own Riding Assist and Riding Assist-e concepts have revealed a working steering-control system, operating in tandem with automatic braking and acceleration to allow motorcycles to balance themselves at low speed—even without a rider on board. 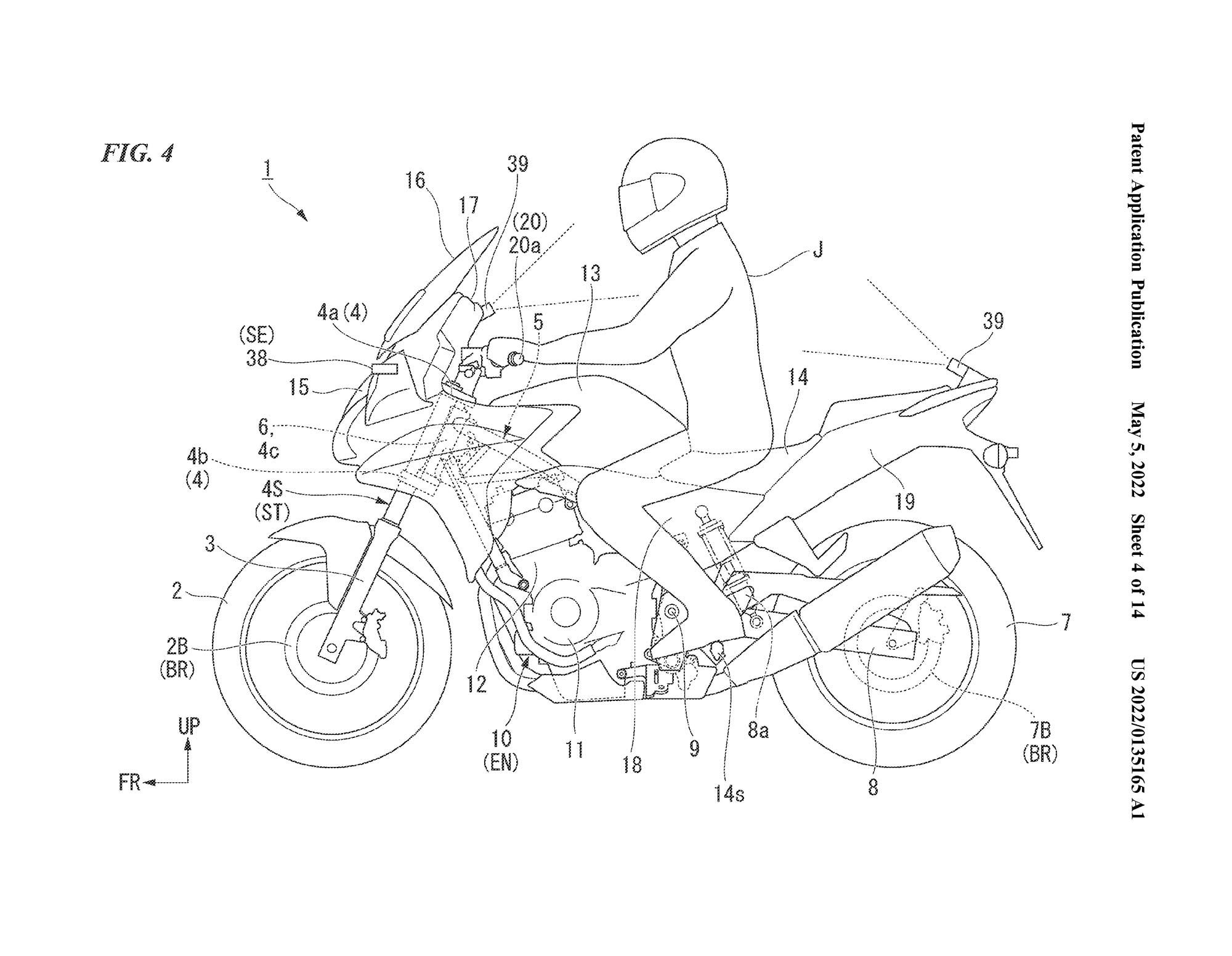 This illustration simply shows all of the systems that the overall package would require. (Honda/)

Its latest patent shows how those features can be combined, along with other technologies including: on-board cameras, a LiDAR (light detection and ranging) sensor, GPS, and short-range vehicle-to-vehicle communication systems to create a bike that can intervene when required with an autopilot-like cruise control or aid when the rider fails to spot or react to a danger.

The patent, titled “Drive Assistance Device for a Saddle Riding Type Vehicle,” shows a motorcycle fitted with cameras, radar, and LiDAR that uses that array to build a 3D image of its immediate surroundings, tracking other objects and vehicles and effectively keeping an eye out in every direction to monitor for dangers. It describes a built-in steering servo, using the same “magnetostrictive” torque sensor technology (that Yamaha is using to test power-assisted steering on its 2022 works motocross bikes) that can distinguish between rider inputs and external forces—resisting movements of the wheel from bumps or potholes but helping to turn the wheel when you put pressure on the bars. There are also pressure sensors in the seat, handlebar grips and footpegs, allowing the bike’s computer to tell if you’re holding on with both hands, combined with a rider-facing camera fitted to the dash, monitoring your posture and weight distribution to help interpret your intentions. 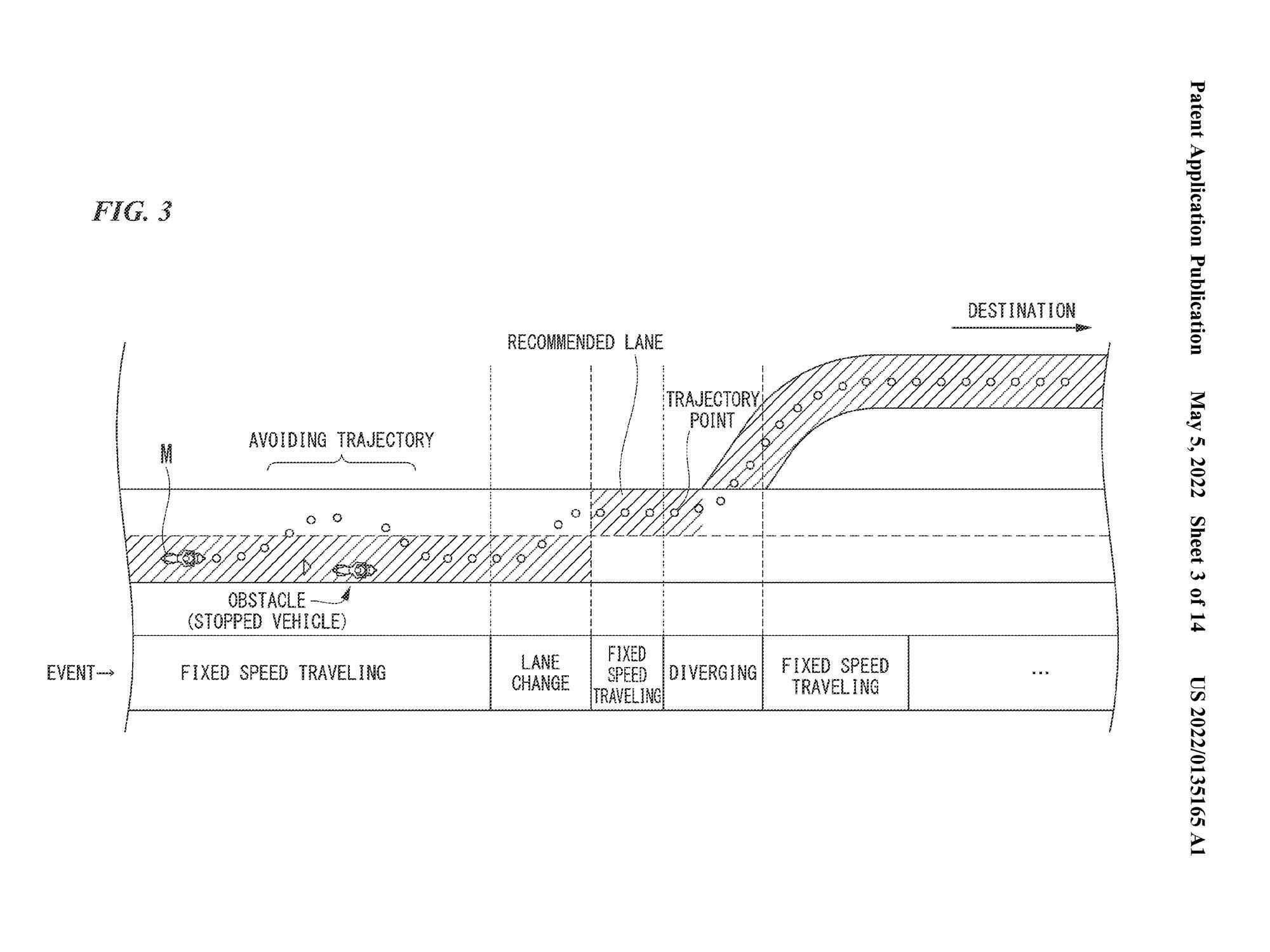 This illustration shows how the motorcycle (M) would avoid an obstacle in the road. In this case, a stopped motorcycle. (Honda/)

It might sound over the top, but most of these systems are developments of ideas already used in high-end cars to enable semi-autonomous driving. Honda has plenty of experience here, as it was among the first to introduce radar-cruise control and lane-keeping systems on cars—going back to as early as 2004. Honda’s Japanese market Legend luxury sedan is the first available in the world with a Level 3 Autonomous system, which can pilot itself in congested traffic and in certain circumstances doesn’t even require the driver to pay attention and be ready to take control.

Honda’s motorcycle version of the system, described in the new patent, includes adaptive cruise control and lane-keep assist as well as the ability to avoid obstacles in the road, but in some ways it’s actually more complex than the tech used on cars. In particular, it has to recognise the fact that bikes have much more flexibility when it comes to how they use the lanes they’re riding in. The patent explains that, when cornering automatically, a bike will use its sensors and GPS to straighten corners as much as possible, taking a wide entry line, cutting toward the apex and drifting wider again on the exit, all while staying in its lane. It also shows that when following another bike, the system will move to one side of the lane to create a staggered pattern and give more stopping distance.

Fig. 10 shows how motorcycle P1 gets out of the way of a faster vehicle approaching from the rear (in Japan they ride on the left). Fig. 8 shows how the bike would take a curve autonomously. Fig. 9 shows how the system would automatically stagger the bike in the lane to allow for more stopping distance. (Honda/)

Don’t expect to be able to buy a bike with this technology anytime soon. This is clearly a long-term project, and we can expect it to evolve over generations of the technology. A radar-assisted adaptive cruise control and lane-keep-assist system is likely to be the first step—probably coming on a future-generation Gold Wing—but in a decade’s time it’s quite possible that your bike will be able to step in and save you from an accident before you’ve even realized the risk was there.

Vent Introduces Updates To Its Derapage And Baja 125 4T Models