EPA-rated range figures tend to not tell the whole story when it comes to EVs in real-world scenarios. Just look at our Porsche Taycan range tests as excellent examples of the disparity between EPA-rated range and actual range.

With this in mind, we decided to perform a similar (albeit much shorter) range test for our new 2022 BMW 330e xDrive plug-in hybrid. The question: Starting with a 100% charged battery, how far is our PHEV sedan able to travel before requiring the gasoline engine to fire up?

To set the table, the 2022 330e xDrive is EPA-rated for 20 miles of electric-only motoring — this jumps to 23 miles with the rear-drive 330e, but ours is the xDrive all-wheel-drive version. That’s fairly average when it comes to luxury PHEVs these days. This range comes via a 12.0 kWh lithium-ion battery pack, of which 9.09 kWh is usable. The pack is located under the rear seats. Electric-only motoring is possible by way of a 107-horsepower electric motor integrated with the eight-speed automatic transmission. Practically speaking, this means that even when you’re operating under electric power, you still feel the “shifts” from the transmission. 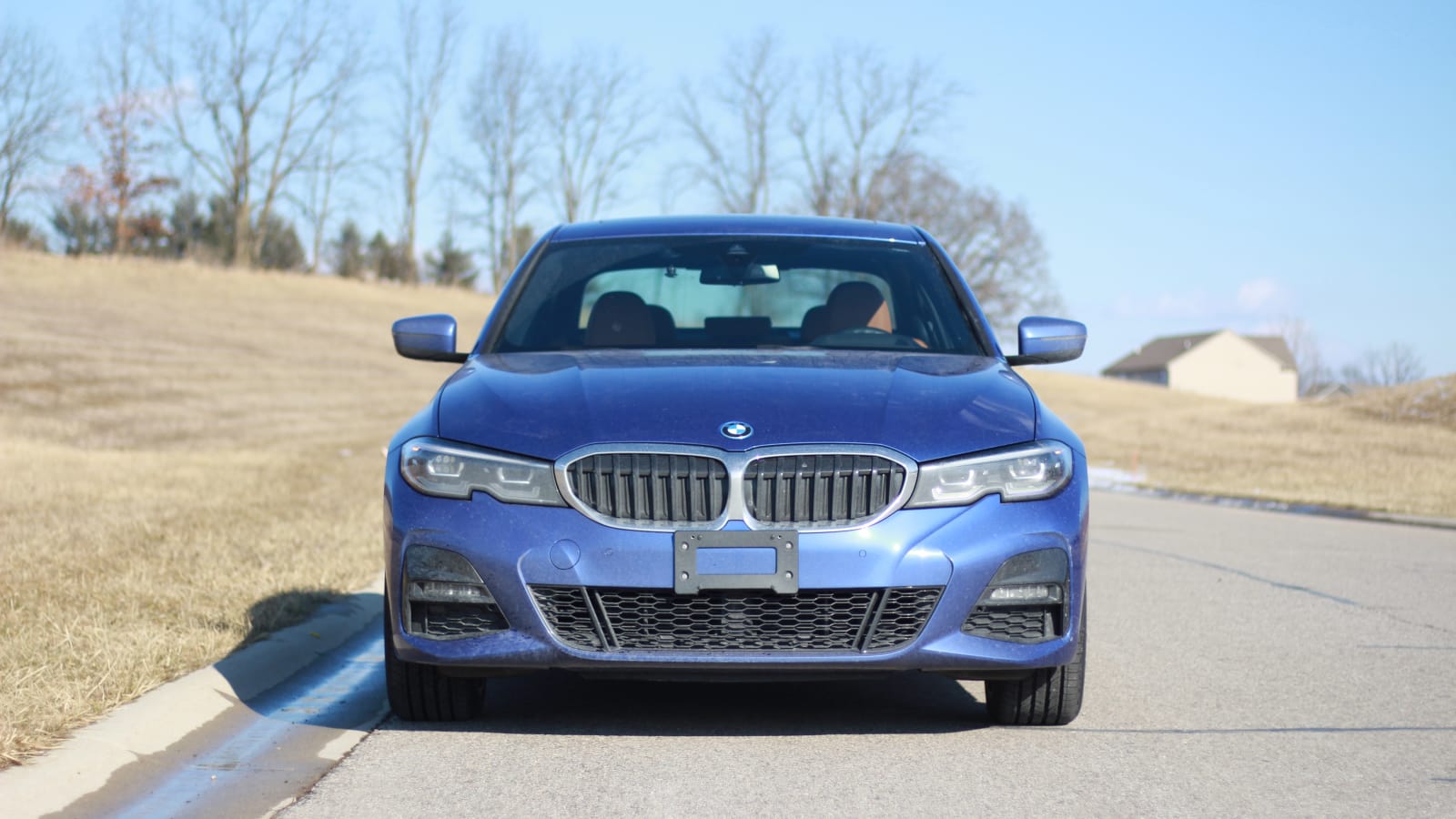 The test we’ve set up is similar to the route that we range tested our old long-term Volvo S60 T8 on. It starts just off Woodward Avenue in Michigan, and we go back and forth on this perfectly straight road until the engine kicks on. The speed limit is 45 mph on Woodward, so the majority of the driving was spent cruising right at 45 mph. Plus, we hit the occasional red light. That means that we got to slow down and take advantage of energy recuperation from the regenerative brakes, but it also meant we must accelerate back up to speed from 0 mph again.

As for the conditions, we ran the test in 38-degree dry weather with a fuel tank that was just over the three-fourth’s line. BMW allows you to set the car in “Electric” mode, which keeps the gasoline engine from coming on unless you push past the detent in the accelerator pedal for full throttle. The climate control was set on “auto” to a comfortable interior temperature; the heated seats and steering wheel were on (hey, it was cold), and we enjoyed some music throughout the test. Basically, the car was set up how any normal person would hop in and drive it to simulate a realistic situation. Once the car told us the battery was full, we set off. 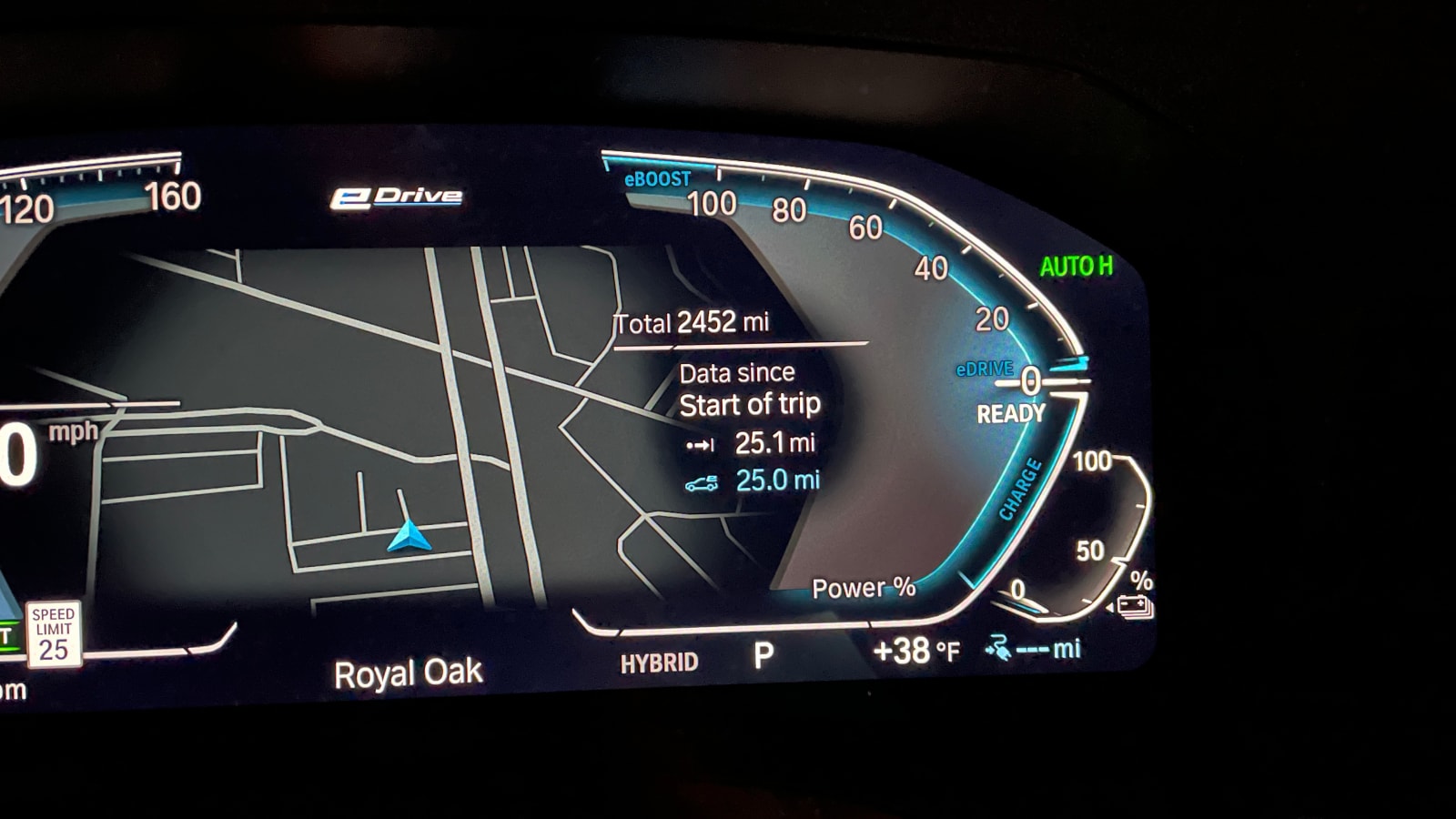 After an impressive 25.0 miles (right on the dot), the 2.0-liter turbocharged engine finally kicked on. Our 330e xDrive beat its EPA-rated electric range by 5 miles, or if you prefer percentages, by 25%. It’s hard to look at that any other way than a rousing success. Do the math, and you end up with an efficiency figure of 2.75 mi/kWh. We averaged 38.2 mph from start to finish, and the whole test took approximately 40 minutes to complete. Most of the test was done with the cruise control on, and the only time we interjected with our feet was when traffic necessitated it.

Of course, if you were to perform a similar test at highway speeds, range would suffer, as electric motoring at highway speeds is not anywhere as efficient as it is in around-town driving. However, knowing that there’s an extra five miles of electric range in the bag versus the EPA-rated range offers a little peace of mind to highway-heavy commutes — top speed in “Electric” mode is 87 mph. Lastly, keep in mind that this range test took place in near-freezing temperatures where electric range is hamstrung. It’s very likely that we could eke out a couple extra miles in ideal weather conditions.