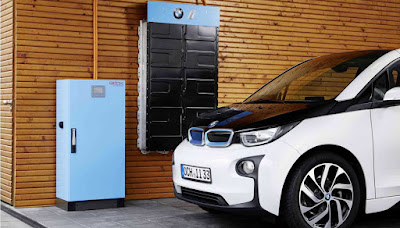 Yesterday at EVS29 in Montreal, BMW announced an energy storage system which uses BMW i3 battery packs. The system can utilize a used i3 pack, or it will be able to be purchased with a brand new battery pack. Perhaps the best aspect of the program is the fact that if you own an i3, you can have your old battery pack built into the system when you upgrade your car with a new pack.

I’ve been waiting for this announcement for a while now. I can remember talking with one of BMW’s top program managers from Munich three years ago. We were discussing my home solar system, and how I’d been powering my MINI-E and ActiveE electric cars with clean, renewable energy from the system for many years at that point. He then asked me the question, “What do you think will happen to your EV’s battery once it has reached its end of life?” I answered that I would imagine it would probably be taken apart and recycled, with the lithium being used for new batteries. To which he said, “What if I told you when you need a new battery for your car, you’ll be able to keep your old pack and put it in your house. You’ll then have the ability to store your unused solar energy, and use it to charge your car at night when you get home. That will assure you’re driving a true zero emission vehicle all the time.” At that point I remember just smiling and he told me: “When you get your i3, I promise you you’ll be able to do just that.”

That was three or four years ago, so obviously I’m not quoting him verbatim, but that’s pretty much exactly how the conversation went. So this program has been in the works for many years now, and hopefully will be launched soon. The press release doesn’t specify when the system will be available, or have any hint of pricing. The one thing I really like about this program is that BMW will allow the customer to keep their old battery pack for use in the system when they upgrade their car to a new pack. No other automaker has provided their customers a path for a 2nd life use of their own battery pack. You already paid for it, why not get another 10 years or so of use from it? Plus, it will be a great comeback when people ask sarcastically (and they do ask this), “Where do you think those toxic batteries from your electric car will end up when you need to replace them?” I can now say, “I’ll hang them on the wall in my home for home energy storage,” and walk away smiling.

“With a battery storage system electrified by BMW i, our customers can
take the next step towards a sustainable energy lifestyle. Coupled
with the home charging and solar energy programs, the system enables
BMW drivers to embrace holistic sustainability beyond e-mobility,” Rob Healey, Manager of EV Infrastructure for BMW North America.

I currently have 52,000 miles on my i3. If I keep the car long term (still undecided on that), I’ll probably want a new battery in two to three years when I have about 120,000 miles on the odometer. By then I’m certain BMW of North America will have started the battery upgrade program which is currently only available in Europe. In order for this 2nd life energy storage system to work, BMW would have to allow customers to upgrade their battery packs. Therefore I take this announcement as further evidence that BMW of North America will absolutely participate in BMW’s battery upgrade program, even if they decided not to do so just yet.

Although it wasn’t mentioned in the press release, I suspect these complete battery packs are stackable. This will allow commercial applications to stack a tower of perhaps ten of them, and store 100 to 150 kWh of energy in a 4′ by 6′ space. If they were using new 94Ah cells in the pack, it would store over 300 kWh in the same footprint.

This is clearly where the industry is going. Tesla was the first automaker to offer for sale a home energy storage system, and since then other OEMs have announced that they too are exploring this market.

For the complete BMW press release on the subject, follow this link.

Where can military personnel find a discount in Topeka, KS?