Honda City is one of the most popular sedans in its segment. It has been a popular choice among buyers from different age groups. It is known for its reliable and extremely refined engine and the comfort that it offers. Honda City is a mod friendly sedan and we have seen several tastefully modified versions of the sedan in India and around the world. Here we have a video, where a third generation Honda City sedan has been neatly restored to a brand new condition.

The video has been uploaded by Autorounders on their YouTube channel. In this video, vlogger talks about the work that has been done to the Honda City. He starts by showing how the car looked when it had arrived at the garage. The car was mechanically perfect but, over the years it had started showing its age. There were many dents and scratches on the body panels. The owner had installed a body kit and cracks had started to appear on the joints of this body kit as well. The Golden Beige shade of the car had started to fade and was giving the car an old and boring look.

As part of the restoration, both exterior and interior on this Honda City was customised. The videos shows how the work was done on this Honda City. They start by removing front grille, bumper, ORVMs and headlamps. Once this was done, the areas where there were dents and scratches were marked. The dents were then corrected using a proper dent puller machine. They did not did not simply use a putty fill in the dents as it would create problems for the owner in future. After the denting work, the existing paint on the car was sanded down and a thin layer of putty was applied on the car to achieve an even finish on the surface. 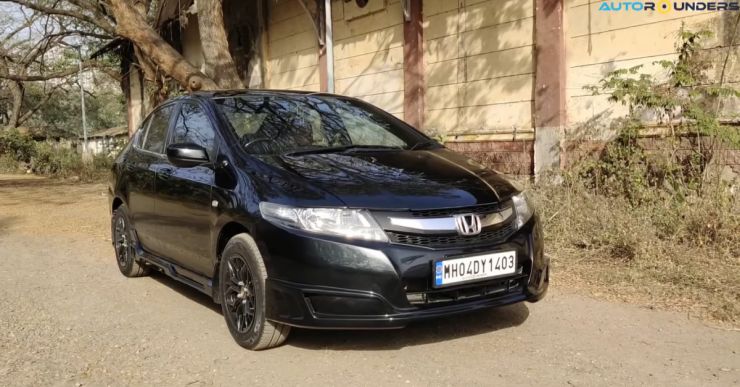 After the putty was applied, sanding was done to remove excess putty and after that the car was taken to the paint booth. The owner of this car opted for Sapphire Black shade which is a premium colour available with BMW. All the parts like door, boot and bonnet were removed and painted individually for an even finish. The car gets new headlamps and the alloy wheels that the car had when it came to the workshop were replaced with sporty looking allot wheels.

The body kit which was installed on the bumper was also restored and was installed back on the car. Along with the exteriors, the dull looking interior of the car was also restored. The beige interiors on this Honda City were replaced with custom made leatherette upholstery in a very light shade of Pink. This actually gives the interior a very unique look. The stock infotainment system was replaced with an aftermarket touchscreen infotainment system. Overall, the work done on this car looked premium and quality of the paint job is very evident in the video. After the restoration work, this looks like a brand new Honda City.