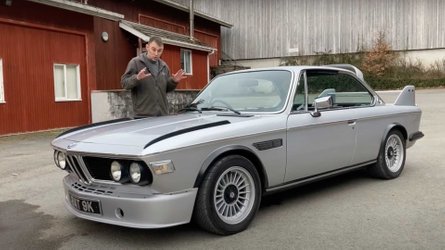 BMW E9 coupes, built between 1968 and 1975 is one of the most sought-after BMW coupes. Around 30,000 were built in total, but far fewer remain in working order today, and we can now add another one to that list of working examples, although it doesn’t actually run the traditional straight-six engine – this particular E9 has Tesla power.

According to Electric Classic Cars, the vehicle had been improperly stored, with its sunroof open in a leaky garage, and that it was in an very bad shape when they started restoring and converting it. Under the hood up front, in place of the engine now sits most of the battery pack out of a Tesla Model S P85 – the rest of it is in the trunk.

Unlike some conversions that retain some parts of the original drivetrain, in this particular project, the gearbox, prop shaft and the differential in the back are all gone. Now the 450 horsepower Tesla motor sits in between the two rear wheels, in a similar position to where it was in the original Tesla, so it minimizes drivetrain losses that way.

Now as much as we like EVs, the fact of the matter is the old 3-liter engine that used to power this E9 is one of the best sounding mills ever made. Its sound signature will definitely be missed, but with more than twice the power now that it’s electric, the extra acceleration will compensate for the lack of a six-pot rumble.

The vehicle is also driven on a famous twisty road in Wales, where it proves agile and fun to drive. Its builders were able to keep the weight relatively similar to the original’s – it is reportedly ‘one small passenger heavier’ than the original and a really well done, good quality conversion.