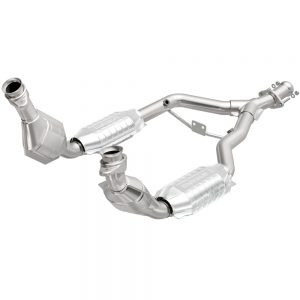 Your car’s catalytic converter is the centerpiece of the emissions control system, which unfortunately makes it one of the more feared and expensive potential repairs you may need. At its most basic level, the cat works as a filter on your exhaust system to reduce the pollution that exits your tailpipe. It’s designed to last the life of the vehicle, but there are a few things that can cause its premature failure.

There are very few things, functionality-wise, that would alert you to a converter in need of replacement. If the metallic element inside the converter cracks, it will make a rattling noise. You’ll see major drivability issues if it gets clogged, but before it gets to that point, you’d probably get a check engine light first, with diagnostic trouble code (DTC) P0420 for “catalyst efficiency below threshold”.

While the description of the code singles out the catalyst element of the catalytic converter, the converter itself doesn’t have any electronic input or output; instead, that code comes from a discrepancy between the air/fuel ratio measured by the upstream and downstream oxygen sensors. The oxygen sensors measure contaminants in the exhaust right before and after the catalytic converter to measure its performance, and the signal they provide to your vehicle’s engine control unit (ECU) will cause the ECU to adjust the engine’s air/fuel ratio on the fly to make sure it performs within spec.

My Car Has a Check Engine Light with DTC P0420. Now What?

First of all, before giving technical advice, let’s start with a disclaimer that every car is different. While the following guidance applies to most vehicles and is a great start for DIY mechanics, it’s never a bad idea to get any issue professionally diagnosed before spending hundreds of dollars.

Now, we’ve established that DTC P0420 is caused by a bad signal from your O2 sensors. This could be for one of two reasons:

A reasonable first step here would be to replace your O2 sensors, especially if you’re also getting a code diagnosing a potential electrical fault with them. While we don’t usually like to advise “throwing parts at the problem”, it’s less wasteful in this case because if the issue is with the catalytic converter and NOT the O2 sensors, a faulty catalytic converter could still contaminate the O2 sensors. If you install a new catalytic converter with old O2 sensors feeding incorrect data to the ECU, it could prevent your vehicle from running as efficiently as possible, and cause damage to the new converter you just replaced. It would be a shame to replace a converter that costs several hundred dollars, only for the new part to be poisoned by a $50 sensor that’s supposed to monitor its performance.

One last diagnostic test that only works on downstream cats under the car: if you have access to a laser thermometer, get under your car (unfortunately only works when it’s running at temperature) and use the thermometer to check the temperature of the exhaust pipe right before and right after the converter. If you see a large gap between the two numbers, it’s a clear indicator that the cat is clogged. This will not test for a shattered internal catalyst element though, nor would it work on manifold converters.

I Replaced My O2 Sensors and Still Have a Check Engine Light. Now What?

That is unfortunate, but something we were prepared for. This is the point where we would advise getting the vehicle professionally diagnosed, because even though we’re pretty sure it does need a new converter, modern cars will have between two and four converters total, and you may not need to replace all of them yet. Your most basic four-cylinder car will have two converters; an upstream converter (sometimes called the pre-cat) located on the exhaust manifold, and the downstream one located under the car. Cars with a V6, V8, V10 or V12 engine will have two upstream converters, since they have two manifolds, and either one or two downstream converters. On non-turbo cars, upstream converters are located on the exhaust manifold so they get up to operating temperature sooner, and this also makes installation a little easier. Turbocharged vehicles have the upstream cat integrated into the turbo’s exhaust downpipe.

There’s four pieces of information you need to know in order to find the right catalytic converter online:

Confusingly enough, there are converters available for cars originally equipped with CARB emissions that are NOT CARB-legal, or vice-versa, for vehicles that may have moved locations over the course of their lifetime. This is in the rare instances that there are physical size differences between the California and non-California parts. If you live in a CARB-restricted area, you absolutely MUST use a CARB-approved item, with the executive order (E.O.) number stamped on it; your smog technician will look up the E.O. number to make sure it’s approved for use on your specific car. WE WILL NOT SHIP ITEMS TO CALIFORNIA OR COLORADO IF THEY ARE NOT 100% C.A.R.B. LEGAL

Most of our catalytic converters are direct-fit replacements, meaning they will bolt-in just like OEM, making it much easier for the DIY mechanic with regular hand-tools. For some older or more obscure applications, there are “universal-fit” or “weld-in” converters. These will be cheaper to buy upfront, but as the name implies, you’ll need to cut out the original converter and weld these in. Sometimes you’ll need to know the exact length of your original converter, as well as the diameter of your exhaust pipe. For CA-legal universal cats, you can look up the correct item by vehicle application, since the CARB E.O. number approves the item for use on certain cars.

We carry both direct-fit and universal-fit catalytic converters for nearly every car on the road today. While we have many aftermarket suppliers, we tend to favor converters made by Magnaflow. Headquartered in Southern California, they offer some of the highest-quality exhaust components around. They use stainless steel construction to prevent rust in areas that salt the roads, and all their products are backed by a limited lifetime warranty.

Because of the expense and complication inherent to replacing a catalytic converter, it makes sense if you’re a little apprehensive about ordering online rather than just trusting your mechanic to get the right one at a fair price. BuyAutoParts is always happy to direct you to the correct item, either over the phone or via email. In addition to Magnaflow, we also carry other name brands like FlowMaster and Advanced Flow Engineering, as well as value brands like DEC or Eastern Manufacturing. Contact us for knowledgeable help in getting the highest quality direct-fit replacement parts for any vehicle!

6 Things That Can Cause an Antifreeze/Coolant Leak