MotoGP 2022 – Round Two
Pertamina Grand Prix of Indonesia with Boris

DANCING IN THE RAIN

There is something utterly sublime about watching a wet-race win executed with the supernatural confidence and grace Miguel Oliveira gifted us with on Sunday.

Mandalika, the first Indonesian race for 25 years, on a new racetrack with an uncertain surface, much of which needed replacing after falling apart during the tests, added to everyone’s woes by raining like it was the end of the world.

The race was delayed for over an hour as Uncini and Capirossi, the Safety Czars, toured around the circuit in their BMW to assess the issue.

In pit-lane, a local Pawang – essentially a weather-whispering shaman – banged her bowl and yelled at the clouds, which was certainly a world-first for MotoGP. The Indonesian president, Joko Widodo, was also on hand to add his not-inconsiderable governmental weight to chasing off the weather. He even brought a full-dress marching band along. Delayed or not, the bike-mad Indonesian crowd was not leaving until they had seen a race.

The big news was that Marc Marquez was out. He had crashed three times on the weekend, and was languishing in Q1, and pushing hard in a bid to get into Q2, when the went down again. Then in morning warm-up he had the mother of all high-sides, that was his fourth crash. I thought it might have been his last. How he walked away from it, I still don’t know. I thought he was dead when he hit the track like a meat-filled sack, banging his head and tumbling through the gravel.

He was taken to hospital, and later told everyone the decision not to race was only a precaution. Which may well be true. Or it may well be yet another signal that his storied career may be reaching its end. I certainly hope not. I’m no fan, but the bastard sure can bang and he is a joy to watch when he’s on his game.

Unfortunately, it seems he just cannot get his head around Honda’s all-new race-bike. There are times when he’s still blisteringly fast, and other times when he seems uncomfortable and awkward. The season is still fresher than a new pair of panties, but I don’t like the omens.  (Later we were informed that Marquez was now suffering double vision again as a result of that last impact in warm-up)

The race-distance had been shortened, just like the preceding Moto2 race – but it was not because of the rain. Officials felt the track was just not up to a full race-distance event. They said it was the heat, but it was raining, so while it was hot, it wasn’t that hot. The good oil says they did not have confidence in the surface – which is, ironically, very grippy in the wet.

Michelin had brought along a host of hard-cased tyres, last seen in Buriram in 2018. It understood they would be necessary to cope with the super-heated track, which had hit 60-plus degrees on Thursday.

But no-one was happy about that. Pol Espargaro was even whining how it was all so “unfair” that he had to use these strange tyres, and advised everyone that Honda was unhappy. And here I was thinking the only thing HRC was unhappy about is Alberto Puig’s continued failure to create a winning team.

Alex Rins’ Suzuki caught fire during practice, and the resultant oil sent Zarco into the marbles. It was then I discovered paper towels could be used to mop up oil spills, because that’s what was used. Obviously, the new track surface is more delicate than we knew, because no-one was scrubbing it with a wire broom.

The only other pre-race incident was Morbidelli copping a grid-penalty for not doing his practice race-starts properly. New rules had come in about these, and Franki didn’t attend that briefing. But since Marc was out, the three-place penalty was only a two-spotter.

When they finally lined up, Fabulous was on pole, with Martin and Zarco beside him on the front row. Brad Binder had secured a solid fourth, with the Beast and Pecco finishing off the second row.

The third row was Oliveira, Rins and Miller, but there was only one second between Fabulous and Maverick, all the way back in nineteenth. So it was as tight as it could be.

Most races these days are very hard to predict. And this had to have been the hardest. Especially when it started raining. An unknown track with an iffy surface, little actual data for the teams to go on, weird tyres, and a witchdoctor chasing away the clouds. You can understand why my tipping contest is not going well so far.

Fabulous made it into Turn One before everyone else. But not by much. Oliveira was right behind him, with both Miller and Rins in soggy pursuit. Mir had sailed from 18th place to eighth after four corners, and the spray was making it a very hard race for anyone not at the front.

Which is where Miller put himself after seeing Fabulous display hesitancy. Miguel also passed the world champion. It’s kinda general knowledge Fabulous is not a lover of the wet. Some riders revel in such conditions. Fabulous is not one of them, so I figured he’d just go backwards some more, find a pace that was comfortable and just ride for what points he could.

He was in third and falling into the clutches of Rins, Zarco, and Mir, as Oliveira was making Jack work to stay in front. Interestingly, their lap times were only some seven seconds slower than what they were doing in the dry, so the surface was offering the wet-weather grip they all understood it did.

As Miguel Oliveira began his wet-racing masterclass by finally passing Jack to grab the lead, it was becoming very obvious Rins was gonna mug Fabulous – who seemed to be holding up both the factory Suzuki and Zarco’s Ducati.

So that happened on the next lap. By this stage, Miguel and Jack were more than two seconds ahead of the race for third, and Jack was now putting in the hard yards. He was already pissed at Fabulous for riding into his leg earlier in the race, and now Miguel was making Jack, a true wet-weather maestro look a bit slow.

I saw a few riders kiss the white line coming out of a corner, and was astonished they managed to stay on the bikes, which did their best to throw them off. Dovizioso wasn’t tossed, but mechanical issues put an end to his race. His dashboard was not working from the start, his launch control was down, and his left grip was loose. He was also blind and deaf, apparently. “I couldn’t see or hear anything,” he said after the race.

Jorge Martin scored his second DNF of the season by running off the track coming into Turn One, which made him and Dovi the only two DNFers in a race I initially thought would cull half the field.

Things largely settled briefly at the halfway point of the race. Miguel was now 2.3-seconds ahead of Jack, who was 1.5 ahead of Rins, with Zarco a second behind the factory Suzuki. But Zarco was now the fastest man on the track, and closing on Rins.

There was some interesting stuff going on towards the back of the field. That noise you can probably hear if you listen, is the entire South African nation exalting the performance of Darryn Binder, while rubbing Remy Gardner’s nose in his last place.

You’ll recall Remy said some things about Darryn’s riding in Qatar. Poor bastard did not understand that no-one is permitted to criticise a South African rider. And that applies even more if that criticism comes from an Australian, who is also a rookie.

And I bet you thought we were parochial, huh? We got nothing on the Yarpies. They will expel our diplomats like spat-out watermelon seeds the next time some Aussie suggests Darryn Binder is riding like a feral twat.

Darryn had managed to get himself into 12th by this stage of the race, but since he’d started in 10th, I still failed to see what the fuss was about. Maybe it was because he’d not yet crashed into anyone.

Still, he did have a wiggle on and looked to gain a few more places, so maybe that was it. Then his brother passed him.

Meanwhile, Zarco had closed up on Jack, while Miguel was now four seconds ahead of the Aussie. And then it was Fabulous’s turn to dial it up. He passed Rins, who’d had a bit of a moment, and set off after Miller.

Darryn Binder was now the fastest rider on the track, and in tenth spot behind his brother Brad. South Africa was on fire. I’m sure they all thought the Binder boys would now come home in first and second – but the only way that was going to happen was if the eight blokes in front all fell off.

Zarco then passed Jack, who immediately passed him back, but that just allowed Fabulous to catch them both, and just six laps from the end, the defending world champion gave his fellow Frenchman the un-lubed baguette.

Zarco fought back, almost died, and decided Fabulous could have third place. But Fabulous wanted second place and passed Jack at Turn 17 very soon after disposing of Zarco. 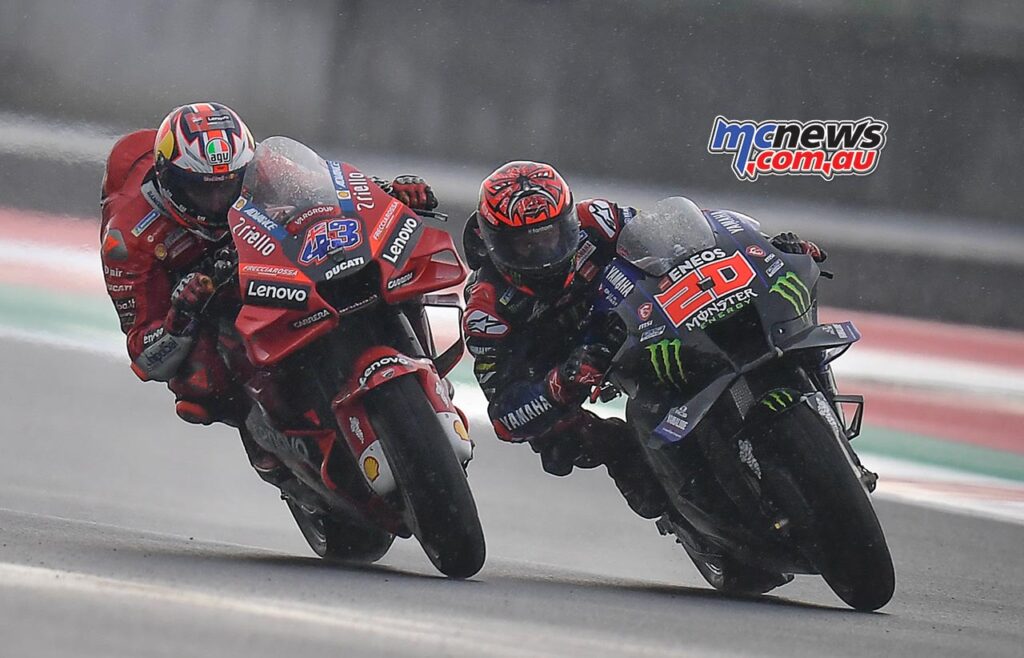 Darryn Binder was not done. He was now in eighth after passing his brother and then Luca Marini. It didn’t last. Both Brad and Aleix Espargaro relegated the rookie South African back to tenth. Still, he did make an admirable showing.

Fabulous was on fire. He was chasing Miguel with intent, but there were too few laps left. Miller outbraked himself in Turn One four laps from the chequered flag, and allowed Zarco to get by.

Three laps from the end, Fabulous was obviously catching Miguel. He was lapping a second a lap quicker. But with a 3.5-second lead and less than three laps to go, it was not going to happen, especially when Miguel managed to see his pit-board through the rain and opened it up a touch.

Miguel ended up winning by more than two seconds, but Fabulous was the more ecstatic of the two with his hard-fought second place.

Zarco was his usual taciturn self on the third step of the podium, and while Jack was disappointed to miss out on a podium, I think he was just happy to get back to his pretty new girlfriend.

No less a personage than Joko Widodo himself handed out the trophies – and no, that’s not a signal for Scotty from Marketing to get himself along to the next club round at Eastern Creek – though I wouldn’t put it past him.

Argentina is next, which is the last of the fly-away rounds for now. The blokes all love Argentina. Jack has told me they have the best parties down there. I believe him. 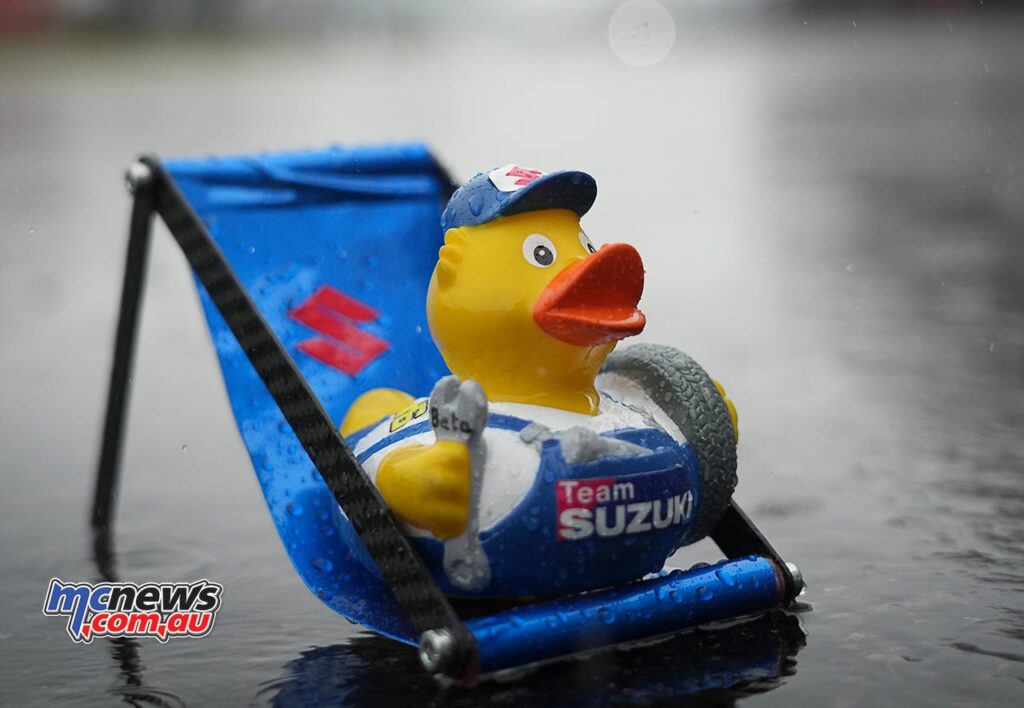